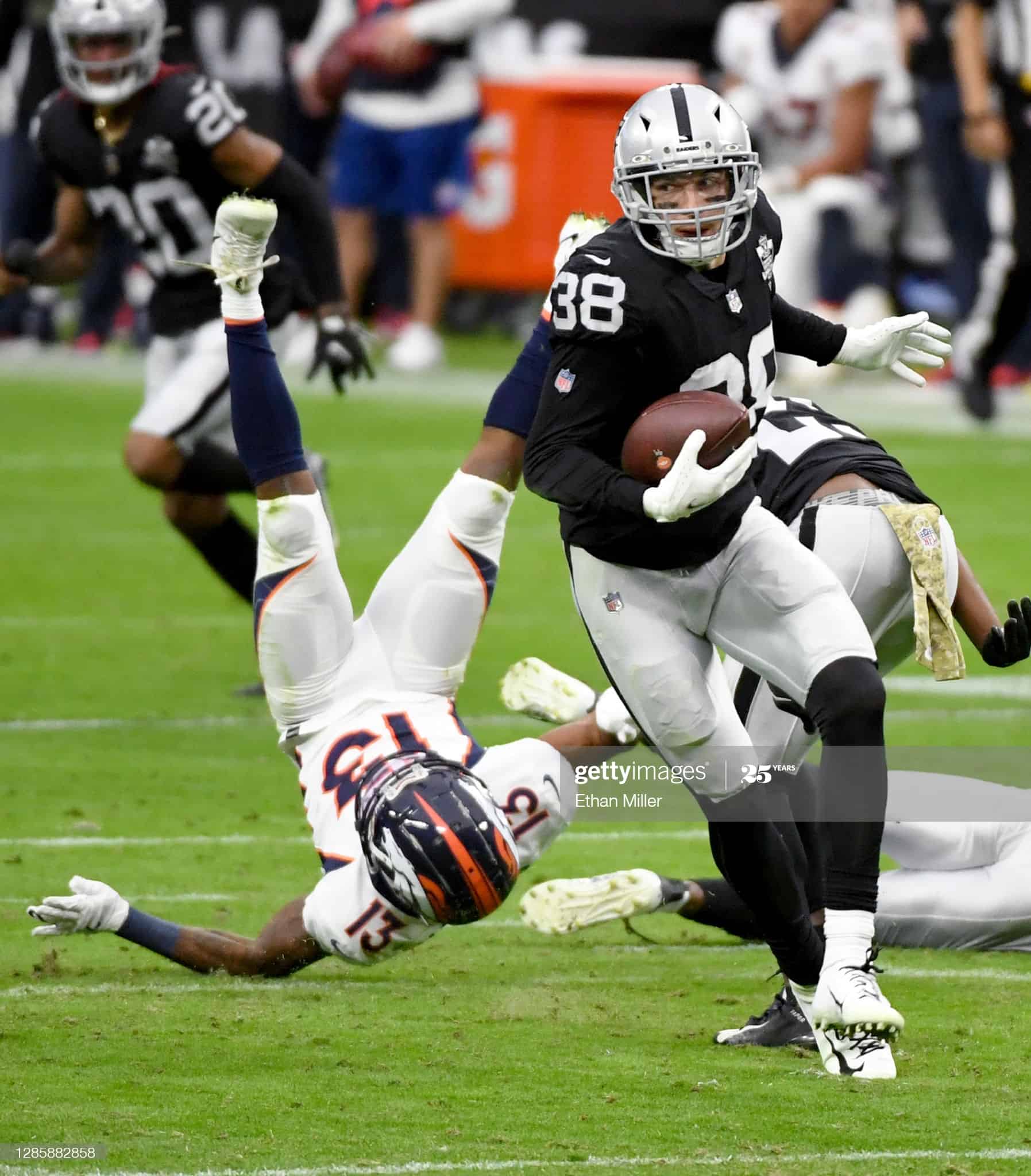 Another week and to me Week 12 was by and large a mess with a lot of sloppy play; and no, I’m not just talking about poor Kendall Hinton being put in an impossible situation. If nothing else, all of us armchair quarterbacks (and armchair running backs, defensive backs, etc) should realize how hard it is to do what these players do each week, on each side of the ball.

INGLEWOOD, CALIFORNIA – SEPTEMBER 20: Tight end Travis Kelce #87 of the Kansas City Chiefs rushes the ball in front of linebacker Kenneth Murray #56 of the Los Angeles Chargers during the second quarter at SoFi Stadium on September 20, 2020 in Inglewood, California. (Photo by Harry How/Getty Images)

Not to be confused with the David Long Jr that is a cornerback on the Rams. I was wrong about Will Compton in this column last week. Long returned from the COVID list and got 49% of the Week 12 snaps, compared to Compton’s 41%. Long played very well in limited playing time, with 2 solos, 1 assist and 1 PD. He was the highest graded defensive player for the Titans according to PFF. I would suspect that Long’s playing time will go up based on this game and as he gets used to the game environment again.

Micah Kiser was placed on IR a few days ago, and Reeder replaced him as a starter this time, just like earlier in the season. He responded with 12 solos, 3 assist and a TFL, similar to his production when Kiser was out before. We know the starting MLB for the Rams is a productive spot, so if Reeder is available he should be startable for however long Kiser is out for.

What would this column be without one of Paul’s guys making an appearance? Well, it would be what you were used to in Weeks 1 -11 but that’s not the point. Murray is not someone you will find on the waiver wire in Dynasty league (except for the most shallow [no, not the Lady Gaga song] leagues, but in redraft he may be available.

Weeks 5,7 and 8 saw him getting 100% of the snaps, but in three weeks he fell to 52%, 90%, 77%. With Denzel Perryman going out in Week 12 he was up to 95%.Murray only ended with, but the Bills have not been giving up many points to opposing linebackers this year. Week 13 brings the Patriots, who are much more linebacker friendly. If he is available in dynasty, go get him of course, but I like him in Week 13 for redraft as well.

Tahir Whitehead is still listed as the starter but only played on snap in Week 12 without any stated injury. Jermaine Carter played a season high 64% of the snaps after having 48%, 21% and 55% in the past three weeks. Prior to that he only hit double digits (11%) once this year. It is seemingly like Jermaine is getting the trust of the coaching staff, and he played week in Week 12, ending with 4 solos, 4 assists and 1 TFL.

The Panthers are on bye this week, but their end of the season schedule has some nice games for points given to opposing linebackers (Denver #17 in Week 14, Washington #1 in Week 16 and New Orleans #5 in Week 17).

DETROIT, MI – NOVEMBER 17: Marvin Jones #11 of the Detroit Lions scores a third quarter touchdown as Donovan Wilson #37 of the Dallas Cowboys attempts to make the stop during the game at Ford Field on November 17, 2019 in Detroit, Michigan. Dallas defeated Detroit 35/27. (Photo by Leon Halip/Getty Images)

Yes we had him listed here earlier in the season, but Wilson has been playing very well lately for Dallas and should be higher owned. He’s had a 100% snap share the past two weeks and combined for 11 solos, 8 assists, .5 sack, 2 forced fumble and 1 fumble recovery.

A second year player, he has been playing well now that he is getting consistent playing time, and I like him the rest of the season (assuming the Dallas coaches do not go back to seemingly alternating starters, which I can’t discount them doing).

Ward nearly a 100% snap share most of the season, but before this week was averaging about 4.50 points a game before Week 12. In Week 12 he ended up with 11.50, and in Week 13 he faces Buffalo, who give up the 6th most points to opposing safeties. If you need a safe floor, or bye week help, Ward is a nice start.

A former Cowboys safety, Heath replaced former starting safety Erick Harris during Week 10 against the Broncos. He started Week 11 but only played 64% of the snaps. He played 94% of the snaps Week 12 against the Falcons and ended with 9 solos, 1 assist, and 1 TFL. Heath has a lot of prior starting experience from 2017-2019 when he started most of Dallas’ games, so we can produce, although his ceiling is unlikely to be more than a low end DB 2 each week.

Another guy we have mentioned prior, Kirkpatrick has averaged 8.17 points the past three weeks and faces the Rams in Week 13, who give up the 7th most points to opposing cornerbacks. He has an 86% snap share over the past 6 weeks and still has low ownership. He is a must start in CB required leagues, and I’d be fine with him as my DB2 in most other leagues this coming week as well.

ARLINGTON, TEXAS – DECEMBER 23: Randy Gregory #94 of the Dallas Cowboys recovers a fumble against Bobo Wilson #85 of the Tampa Bay Buccaneers in the third quarter at AT&T Stadium on December 23, 2018 in Arlington, Texas. (Photo by Ronald Martinez/Getty Images)

Davenport missed a lot of time earlier this year, and has underproduced from what had been expected of him. That said, he was a high draft pick (#14) by the Saints in 2018 when they traded up to get him and has the talent to be a playmaker across from Cameron Jordan. From Week 7 on he has had a high 40s or better snap share with 9 solos, 4 assists, 3 TFL, 1. sacks and 1 PD. In Week 12 he faced the Broncos, who gave up the 7th fewest points to opposing defensive ends. Despite that he had 3 solos and 1 TFL, and Week 13 brings the Falcons, who give up 2nd most points to opposing defensive ends.

Gregory has played well since returning from his most recent suspension. Weeks 8-12 (four games in there for Dallas) he has averaged a 43% snap share and has had 9 solos, 1 assist, 3 TFL and 2 sacks. Gregory has always been a talented, but troubled pass rusher. Week 13 (whenever it actually gets played) has Dallas facing Baltimore.

Baltimore is working through a plethora of COVID issues, but even without that they were giving up the 11th most points to opposing pass rushers. I like Gregory as a pick-up for this week, and potentially the rest of the year as three of the four teams they face from Week 14 on (Giants, Eagles and Bengals) are in the top 7 in terms of points allowed to opposing defensive ends.

Another guy I’ve been pounding the table for lately, Jones had a great Week 12 game with 5 solos, 4 assists and 1 TFL. Week 13 brings the Chiefs, and in Week 7 against them he had 2 solos, 1 TFL and 1 sack. In his past six games (he did not play Weeks 3 – 6) he is averaging a 66.5% snap share and 7 points a game. I am not saying he will be a DL 1, or even DL 2, week in and week out, but I think he is playable this week, especially in leagues where you have to play an IL, as he is IL eligible.

Butler has seen increased playing time the past two weeks he has played, with 59% (Week 10, 2 solos and 1 assist) and 65% (Week 12, 4 solos, 1 assist, 2 TFL, 1 sack and 1 PD). In Week 13 the Patriots face the Chargers, who give the 5th most points to opposing defensive tackles. I wouldn’t start him in a regular DL league, but in a DT required league I think he’s a decent play in Week 13.

You catch NFL Week 13 Offensive Waiver Wire Adds and all our other video content on YouTube. Be sure to subscribe and click the notification bell to ensure that you don’t miss any of our other great content. We have free IDP Rankings over on RotoHeat.com, and you can catch our IDP-Specific podcast on most podcatchers! You can also find me on Twitter.

The Dogs of your IDP Dynasty Rosters!