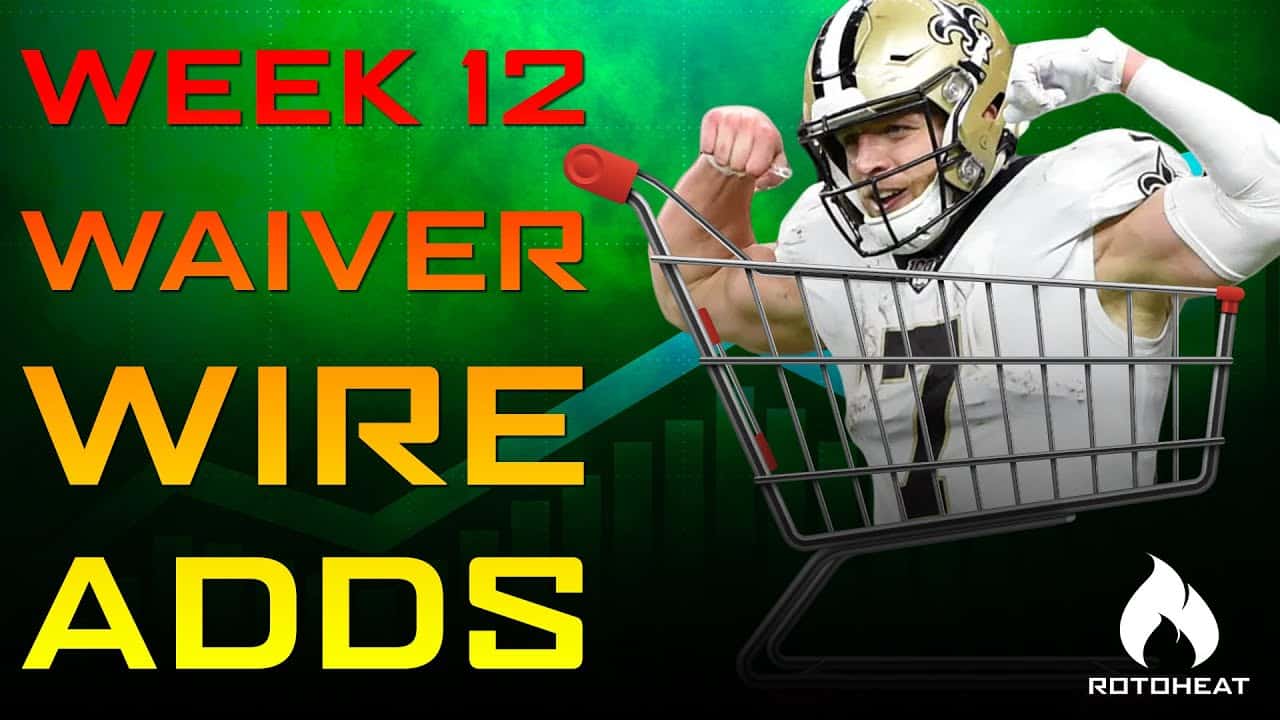 Each and every week in Fantasy Football there are surprise performances and there are injures. Both of these occurrences tend to lead to opportunity, and opportunity leads to touches, and touches lead to fantasy points. Every week there is something to pay attention to in the NFL. At times it is injuries, others it’s bye weeks, and in 2020, the possibility that the Covid-19 pandemic will impact NFL teams all prove that the need for the waiver wire is not going away.

In Week 12, all 32 teams are in action as the bye weeks take a week off. Rob Sullivan is back with Brad Menendez this week to discuss which players we like for your NFL Week 12 Waiver Wire Pickups.

Tua Tagovailoa was benched in the fourth quarter of the Dolphins’ Week 11 game against the Broncos after completing 11-of-20 passes for 83 yards and one touchdown. With the 6-3 Dolphins trailing the 3-6 Broncos 20-10 with about 10 minutes to play, Tagovailoa was yanked from the game in favor of Ryan Fitzpatrick. The rookie had a rough day, there is no doubt, but upcoming games against the Bengals and Jets in the next two weeks will get Tua back on track.

Kirk Cousins was 22-of-33 for 314 yards and three touchdown passes in the Vikings 31-28 loss to Dallas. Cousins hit Adam Thielen for a pair and Justin Jefferson for another in what was one of his best games of the season. The loss was a disappointment for Minnesota and their faint playoff hopes. Cousins get the Panthers and Jaguars in the next two weeks, and should be in starting lineups in SF leagues and is a plug and play streamer in typical 12 team 1 QB leagues.

Alex Smith completed 17-of-25 passes for 166 yards, a touchdown, and an interception in Washington’s 20-9 Week 11 win against the Bengals. Unlike the past two games, Washington had positive game script throughout this one, and as a result Smith didn’t need to do much. His lone touchdown toss was to Steve Sims, Jr. Alex Smith will again be a streaming option in Week 12 against the Cowboys on Thursday.

In the Saints first contest with Taysom Hill under center, Latavius Murray out touched Alvin Kamara 14-13 and outgained him 85-49. Game script favored Murray in the 24-9 win over the Atlanta Falcons. With Brees out for at least two more games, Murray could be a plug and play flex against the Broncos and Falcons the next few weeks.

J.K. Dobbins rushed 15 times for 70 yards and a touchdown in the Ravens’ Week 11 loss to the Titans, adding two receptions for 15 additional yards. The Ravens finally committed to a running back and Dobbins rewarded them with his second best overall game of the season. Dobbins’ 17 touches were 12 more than Gus Edwards and Mark Ingram had combined. Dobbins played 41 snaps to Edwards’ 13 and Ingram’s six. Dobbins has RB2 upside in Thursday’s tough matchup with the Steelers if this volume continues.

James White caught 6-of-9 targets for 64 yards in the Patriots’ Week 11 loss to the Texans. White’s role expanded following Rex Burkhead’s departure. He remains the primary passing-down back when the Patriots are in negative game script as Damien Harris and Sony Michel have been early-down rushers only. In PPR formats, White can be a sneaky flex option when New England is big underdogs, something that will be the case on the road against the up-tempo Cardinals in Week 12.

Corey Davis caught 5-of-7 targets for 113 yards in the Titans’ Week 11 win over the Ravens. Davis is now up to 39 catches and 549 yards on the season in 8 games. Davis is giving his long suffering Dynasty managers some hope, in a breakout season. He needs to be owned everywhere.

Deebo Samuel has been gone for a while but should not be forgotten. Samuel is likely to return with the rest of the San Francisco 49ers coming out of their Week 12 bye. Samuel gives the Niners some much needed diversity at the WR position–something that they have been missing all season. Samuel took off in this offense without George Kittle a year ago, and he’s worth the add with the chance to do the same this season.

Michael Pittman caught 7-of-8 targets for 101 yards in the Colts’ Week 10 win over the Titans. His targets, catches, and yards were all new season highs, as Pittman has established himself as an every-down wideout moving forward. Pittman’s long gain of 40 yards was on a fourth-quarter catch-and-run. He also rushed one time for 21 yards. Pittman has seen 15 targets over the last two weeks and looks like someone who needs to be added in 12-team leagues for the stretch run. Pittman will be an upside WR3/4 next week against the Titans.

LANDOVER, MD – DECEMBER 30: Dallas Goedert #88 of the Philadelphia Eagles runs against the Washington Redskins during the first half at FedExField on December 30, 2018 in Landover, Maryland. (Photo by Will Newton/Getty Images) NFL Week 12 Waiver Wire Pickups

Dallas Goedert caught 5-of-6 targets for 77 yards and a touchdown in Week 11 against the Browns. Goedert had 54 of Carson Wentz’s first 73 yards. He had a TD vultured by Richard Rodgers but managed a red-zone touchdown in the fourth quarter to bring the Eagles within a score. Goedert has been a plug-in TE1 with Zach Ertz out of the lineup. We will just keep telling everyone to add him until his ownership is over 65% on all platforms.

Mike Gesicki finished with 4 catches on 5 targets for 43 yards in the Dolphins surprising loss to the Denver Broncos. Gesicki has been inconsistent this season mainly due to his strange usage. Regardless, this TE needs to be owned in all 12 team formats

Higbee and the Rams don’t play until Monday night in Tampa Bay. Higbee appears to be over his hand injury that slowed him in recent weeks and is coming into this one off his second best outing of the season. Tight End is thin and Higbee should be owned in more than 65% of 12 team leagues.