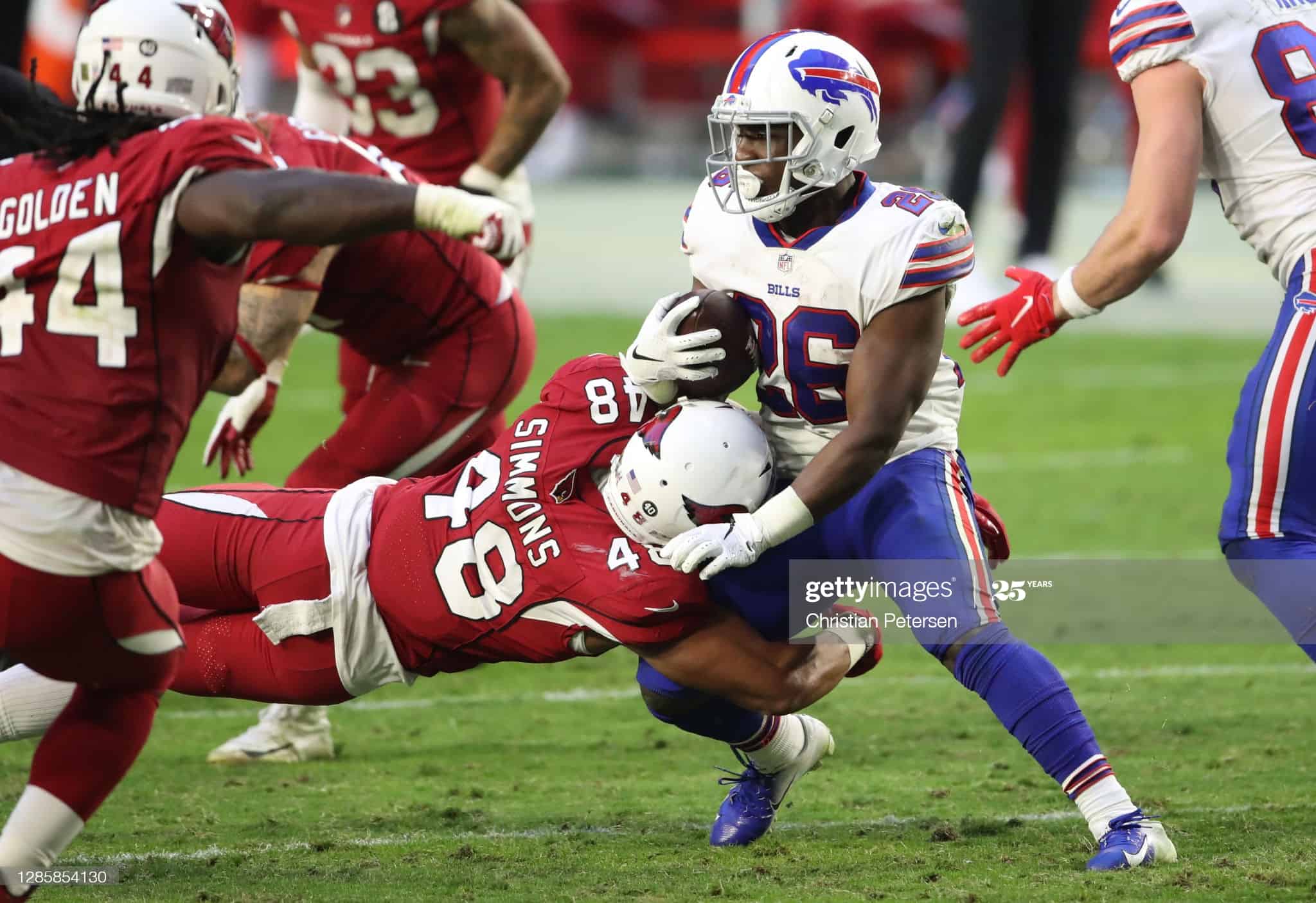 Smack dab in the middle of the season means more bye weeks, and this year in particular, more injuries. After reading this, go look at your league’s highest scoring defensive players by position; it is a mess and gets weird quickly. Don’t worry though, we do the work so you don’t have to! Here are my NFL Week 11IDP Waiver Wire Adds!

From Week 6 on Singleton has averaged in the mid 70s above for snap percentages and has been producing with. Week 10 against the Giants was his best of the season in terms of fantasy points, with 15.50 off 9 solos, 7 assists and 1 TFL. In Week 11 they play the Browns, who give up the 11th most points to opposing linebackers. Nathan Gerry, who had not been playing week before going on IR, should be out another week at least, which makes Singleton a good play for another week.

Week 9 saw Simmons’ highest snap count of the year at 53%, and then in Week 10 he came in once starter De’Vondre Campbell exited with a calf injury. Simmons responded with 2 solos, 2 assists and a TFL. Simmons is a high talented rookie that just has not played much on a veteran defense, but the injury to Campbell gives him a chance to showcase his skillset, if Campbell is out for any games. Monitor the situation in redraft leagues, and while Simmons likely hasn’t been (and shouldn’t have been) dropped in any dynasty leagues, it is worth checking.

The Bengals have one of the messiest linebacker groups in the league this year, with Josh Bynes being the leader in fantasy points and snap count, but I am going with Pratt for the pick-up this year. Pratt, like Bynes, has generally had a nice floor of around 5 points a game. In Week 11 though, the Bengals play Washington, who give up the most points to opposing linebackers. I like Pratt as the younger, more athletic option, who is getting the second highest snap share among the linebackers currently, and is coming off the best Week 10 for their linebackers.

Evans has not lived up to his expected performance this year (32 solos, 21 assists, .5 sacks, 1 PD and 1 fumble recovery for 5.55 points a game), but he is still seeing a snap share in the 80s and has a great match-up this week against Baltimore, who give up the 3rd most points to opposing linebackers.

GLENDALE, ARIZONA – NOVEMBER 15: Cornerback Dre Kirkpatrick #20 of the Arizona Cardinals after the Cardinals score a game-winning touchdown during the final seconds of the fourth quarter against the Buffalo Bills at State Farm Stadium on November 15, 2020 in Glendale, Arizona. (Photo by Norm Hall/Getty Images)

This is more of a deep dive for large leagues, and it wouldn’t surprise me if Washington brought someone in with their safety injuries mounting. It looks like Deshazor Everett will be out a few weeks with a high ankle sprain, and if they don’t bring someone in, Troy Apke looks to be the next in line. He did not do much of anything good last week against Detroit, but if he does start in Week 11 he will face the Bengals, who give up the 12th most points to opposing safeties.

The season long dance between Fuller and Taylor Rapp continues, as Fuller came off the temporary IR and Rapp exited the Week 10 game with a knee injury and is getting an MRI on it. This would suggest that Rapp will be out a bit, and it is worth nothing that Fuller played well earlier this season and was the starter heading into the year.. If Fuller was dropped by a team and you are looking for help at safety, go get him as there is a good chance he starts the rest of the year (if healthy).

The Bengals secondary has been playing poorly all year, and on top of that it is now resembling a MASH unit. A highly touted high school player that never managed to put it together in college at Alabama, Brown went undrafted in 2018 and is on his third team in Cincinnati. Pressed into duty in Week 10 he responded with 6 solos, 3 assists, 2 TFL and 1 PD. Things got worse on the injury front for the Bengals secondary in Week 10 as well (Mackensie Alexander suffered a concussion), and Week 11 brings Washington, who give up the 11th most points to opposing cornerbacks.

The past three weeks he has played in Kirkpatrick has averaged 10 points . In Week 11 the Cardinals have a rematch against the Seahawks, and when the faced off in Week 7 this season Kirkpatrick had 11 points on 10 solos and 1 PD. He is low owned and getting you points, which makes him another great option if you need a CB play this week.

With Hunter out of the year, and the Yannick experiment a failure, the Vikings defensive line has not produced a lot in terms of usable fantasy players. In Week 11 however the Vikings play the Cowboys, who give up the 8th most points to opposing defensive ends and have been a mess on offense in general. This clearly is not the Cowboys offensive line of years past, and with a mid 70s snap share, I like Ofeadi this week, despite only having 9 solos, 12 assists, 2 TFL and 2.5 sacks on the year.

Averaging a snap share in the high 70s there’s a decent shot he is owned in your league, but he is lower owned that he should be given what he did his rookie year and how things are going with injuries in the NFL this year. In Week 11 the Raiders play the Chiefs, who are in the middle of the road in points given up to opposing defensive ends, and when they faced each other in Week 5 he had 7.50 points on 1 solos, 1 assist, 1 TFL and 1 sack.

Fellow defensive end Carl Lawson has been by and large been disappointing this year, and once Carlos Dunlap was traded rookie Khalid Kareem saw an uptick in playing time. On a 68% snap share in Week 8 (Bengals had a Week 9 bye) he only had 1 solo, but in Week 10 he had 3 solos and a TFL, good for 6 points. Week 11 is a nice matchup against the Washington Football Team, who give up the 12th most points to opposing defensive ends. This is a deep dive, but with injuries and bye weeks, Kareem has a chance to be a nice waiver player in Week 11.

Jones has had two games in a row giving us double digit points on 9 solos, 3 assists, 3 TFL, and 1.5 sacks. This year he has generally been seeing high a 60s to low 70s snap share. Week 11 brings the Ravens, who allow are a top five team in terms of points allowed to opposing defensive tackles. For a guy by and large unowned that you won’t need a waiver claim for, if you need a DT this week, Jones is a great option.

You catch NFL Week 11 IDP Waiver Wire Adds and all our other video content on YouTube. Be sure to subscribe and click the notification bell to ensure that you don’t miss any of our other great content. We have free IDP Rankings over on RotoHeat.com, and you can catch our IDP-Specific podcast on most podcatchers! You can also find me on Twitter.