Home Redraft Kerryon Johnson and the Detroit Backfield in 2020 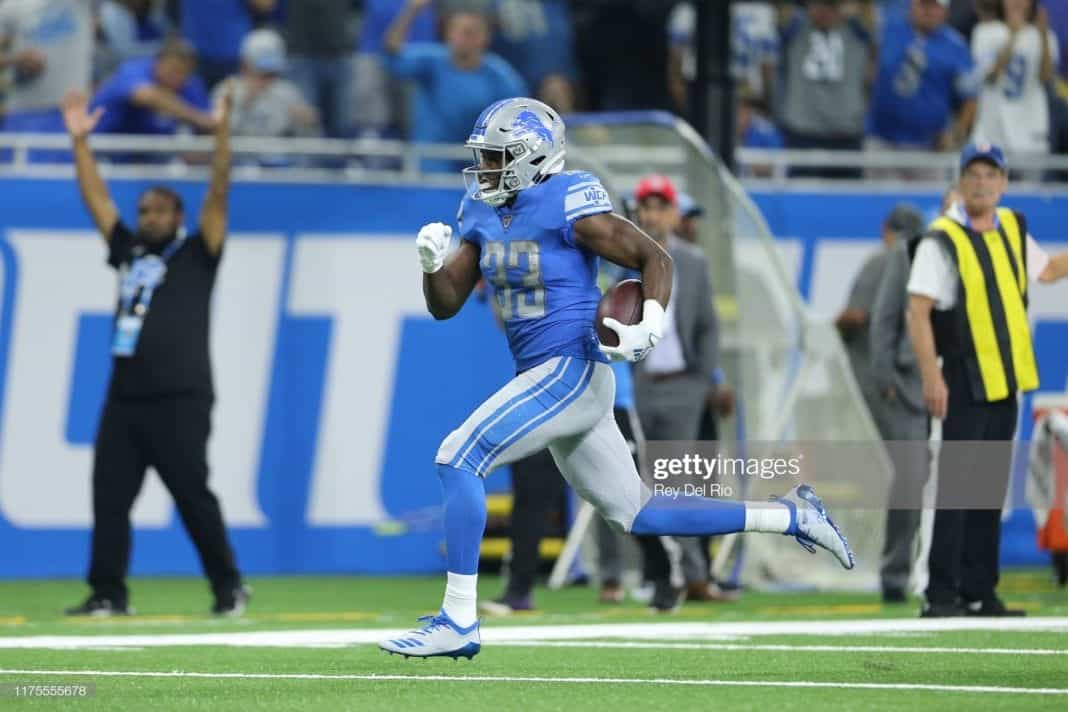 Kerryon Johnson and the Detroit Backfield in 2020

Detroit Lions Offensive Coordinator Darrell Bevell has a desire to be more balanced on offense than he was a year ago. He wants to be a more consistent running football team and make that a weapon he can turn to at any given time.

The Lions brought back Oday Aboushi and Kenny Wiggins, added Halapoulivaati Vaitai via free agency, and drafted Jonah Jackson and Logan Stenberg to help shore up their offensive line. They also drafted Georgia running back D’Andre Swift in the second round to solidify their backfield.

Swift and current Lions running back, Kerryon Johnson, are similar backs in that they both have three-down capability and explosiveness running the ball and as pass catchers.

Head Coach Matt Patricia prefers a running-back-by-committee (RBBC) approach. This was evident in 2018, as we watched LeGarrette Blount carry the ball 154 times compared to Johnson’s 118 carries–an odd workload considering that Johnson averaged 5.4 yards per carry while Blount plodded along to 2.7 yards per carry.

For Fantasy Football purposes, a RBBC is not ideal. Owners would prefer to know the Lions have a clear RB1 and not a RB1A and RB1B situation to deal with. Fantasy Managers need to determine who to draft and when. They also need to consider how the other Detroit running backs–Bo Scarbrough, Ty Johnson and fifth-round pick Jason Huntley–might be deployed.

MINNEAPOLIS, MN – NOVEMBER 4: Kerryon Johnson #33 of the Detroit Lions carries the ball against the Minnesota Vikings during the game at U.S. Bank Stadium on November 4, 2018 in Minneapolis, Minnesota. (Photo by Hannah Foslien/Getty Images) Kerryon Johnson and the Detroit Backfield in 2020

Kerryon Johnson has proven to be a talented, playmaking back for the Lions during the last two years after he was drafted in the second round out of Auburn in 2018. Injuries have been an issue for Johnson though, as he’s averaged just nine games played per year through his first two seasons.

Clearly Johnson’s biggest challenge is his health. When healthy and on the field, he has proven he can play at a high level in this league. The problem with Kerryon dates back to his High School days. At Madison Academy in Alabama for high school, Johnson suffered injuries to both shoulders, a right knee sprain and a broken thumb. During his time at Auburn, he suffered a shoulder injury at the end of the 2015 season. He suffered another injury to the same shoulder in the Tigers’ final regular season game of the 2017 season. KJ also missed two games in 2017 with a hamstring problem and one game in 2016 with a sprained ankle.

A reduced workload for Johnson could be a blessing in disguise. Perhaps he can stay healthy in 2020. If he does, he will deliver a return far better than his current ADP that has his injury history baked into it. KJ is likely the starting RB in Week 1, but how long he holds that title remains to be seen. I will confidently draft him at the back of the 10th round.

ATLANTA, GA – DECEMBER 02: D’Andre Swift #7 of the Georgia Bulldogs breaks away for a long touchdown run during the second half against the Auburn Tigers in the SEC Championship at Mercedes-Benz Stadium on December 2, 2017 in Atlanta, Georgia. (Photo by Jamie Squire/Getty Images) Kerryon Johnson and the Detroit Backfield in 2020

D’Andre Swift is considered one of the top running backs in the 2020 NFL Draft class. Swift is short but strong runner capable of playing all three downs. His patience and vision pay off when he reads his blockers and doesn’t rush to bounce it outside until he sees there’s nowhere to go between the tackles. He pairs his speed and vision with power and balance. Swift is also a physical runner who’s not afraid to lower his shoulder into a defender to finish a run. He’s willing and capable of barreling into big bodies to gain the yard or two needed to convert a first down or score a touchdown.

Ironically, Swift comes with injury concerns of his own. Swift’s slightly slim build and aggressive style has opened him up to injuries. On top of the groin issues he had before the 2018 season, Swift dealt with foot and ankle injuries two seasons ago and a shoulder problem that severely limited him to end 2019. In training camp with the Lions, Swift has missed the last seven days with a leg injury. Perhaps Georgia did him a favor by never over-working him, sending Swift to the NFL with 513 total touches. Swift returned to practice yesterday, how he manages the rest of camp may have a big impact on his usage this season, especially early on.

Swift, like the rest of the rookie class in 2020, are likely to struggle early with limited offseason programs and no preseason action. His lack of practice time amplifies this, and should not be overlooked. In dynasty leagues, Swift is an early first round addition, and in redraft at his current ADP, I am shying away. The 5th round is too high for me, especially considering the circumstances he is in.

DETROIT, MI – NOVEMBER 28: Bo Scarbrough #43 of the Detroit Lions runs for a first down during the fourth quarter of the game against the Chicago Bears at Ford Field on November 28, 2019 in Detroit, Michigan. Chicago defeated Detroit 24-20. (Photo by Leon Halip/Getty Images) Kerryon Johnson and the Detroit Backfield in 2020

After being released, Bo Scarbrough bounced around the league on the practice squad of the Green Bay Packers, Jacksonville Jaguars, Seattle Seahawks and finally the Detroit Lions. Scarbrough made his debut with the Lions in Week 11. From Week 11 through 17, he totaled 89 carries for 377 yards and scored one touchdown. Scarborough, also banged up in training camp, is in a fight for his life to remain on the Lions 53-man roster and holds no fantasy value.

At his pro day at Maryland, Ty Johnson impressed scouts by running a 40-yard dash between 4.3 and 4.4 seconds. The fastest 40-yard dash time ran by any Running Back at the 2019 NFL Scouting Combine (which Johnson was not invited to) was 4.40 seconds.

Johnson dressed for all 16 games for the Lions a season ago, drawing one start. In his lone start, he totaled 19 yards on 6 touches, disappointing the many fantasy managers that added him off of their waiver wire. Johnson should stick around on the Lions roster in 2020, but lacks any fantasy value in Redraft.

Jason Huntley was selected in the 5th round and 172nd overall in the recent 2020 NFL Draft. Huntley spent 4 years at New Mexico State where he totaled 3,316 yards and 25 scores on 508 total touches.

Huntley vs. Ty Johnson may be the most interesting camp battle on the Lions roster. Both are quick, speedy options to catch passes out of the backfield, while also bringing return specialist skills. There could certainly be room for both on the roster, but neither give you a sniff when it comes to fantasy value.

Thank you for reading Kerryon Johnson and the Detroit Backfield in 2020.