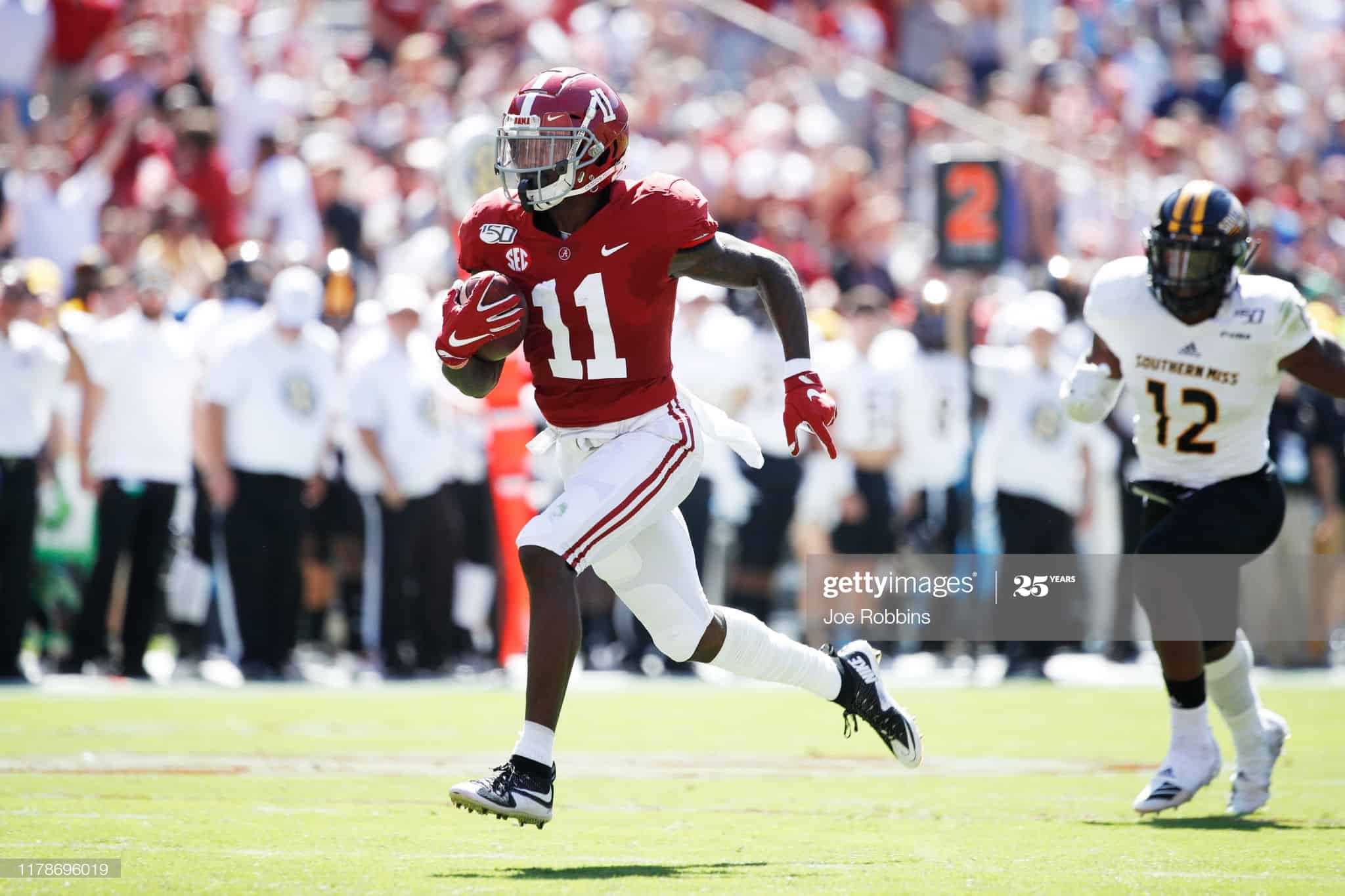 Alabama WR Henry Ruggs III was selected by the Las Vegas Raiders with the 12th overall selection of the 2020 NFL Draft. With the pick, the Raiders made Ruggs the first wide receiver selected in 2020.

The 6’2″, 190 lb Ruggs spent three seasons in Tuscaloosa playing in a total of 40 regular season games. His college numbers don’t exactly leap off the page – 98 catches, 1,716 yards and 24 touchdowns. It is important to note, however, how talented a team Alabama was during Ruggs’ tenure. Ruggs wasn’t an every-down player for Alabama — teammate DeVonta Smith saw more playing time alongside Jerry Jeudy.

Over the course of the past three seasons, Henry Ruggs III made a name for himself with his speed. Ruggs is the fastest man in this 2020 draft class, and it’s that speed that helped Ruggs average 17.5 yards per catch, gain 56.5% of his yards after the catch, and score a touchdown every 4.1 receptions over his three-year career with the Crimson Tide.

Ruggs was clocked officially at 4.27 seconds in the 40-yard dash, slightly better than both of his unofficial times of 4.28 and 4.31. His time was the fastest time of all receivers on the first of four nights of the 2020 combine.

There have been comparisons made between Ruggs and Tyreek Hill. The comparison is logical, as both are neck-breaking fast. Ruggs is a bit bigger and is a more polished WR than Hill was coming out of college. Hill had 860 yards and nine total touchdowns as a rookie before exploding for bigger numbers in 2017, and career-best stats in 2018.

Tyreek Hill has Andy Reid as a play caller and Patrick Mahomes as his quarterback. Ruggs will have Jon Gruden and Derek Carr. Ruggs may very well exceed Hill’s rookie numbers in 2020, and that would be where the comparisons to Hill end in my opinion.

In 2020, Ruggs projects as the #1 WR on the Raiders depth chart. In 2019, The Raiders ran most of their plays out of 11 personnel (1 running back, 1 tight end, 3 wide receivers) 52.5% of snaps, ninth-lowest percentage in the league. Not surprisingly, the offense played with multiple tight ends almost 30% of the time. The only team to run more plays out of 22 personnel (2 running backs, 2 tight ends, 1 wide receiver) in 2019 was the Baltimore Ravens.

With the addition of Ruggs, and to a lesser extent Bryan Edwards, expect that percentage to climb drastically in 2020. Ruggs should get plenty of opportunities to prove himself as the Raiders should target him often in the passing game. The biggest concern for Ruggs is Quarterback play.

Derek Carr will enter 2020 as the Raiders starting QB on a short leash with free agent Marcus Mariota warming in the bullpen. Carr finished 2019 8th in passing yards with 4,055 and 19th in touchdowns with 21 on the season. What doesn’t work in Ruggs’ favor is Derek Carr’s Average Intended Yards. In 2019, it was 6.3. Only Teddy Bridgewater’s 6.2 was worse. Should the Raiders transition to Mariota, it gets slightly better for Ruggs. Mariota’s Average Intended Yards in 2019 was 7.4 (20th).

When all is said and done, I see Ruggs and the Raiders struggling with consistency. Ruggs will find himself on your bench more often than in your starting lineup. I project Henry Ruggs III as a high-ceiling flex starter in 2020.

Henry Ruggs is a blazing fast WR that gives the Raiders and his fantasy managers the possibility a home run with every snap. As I mentioned, I do believe that the QB play in Las Vegas is the biggest wildcard in terms of Ruggs’ upside. If Derek Carr can not get it done in 2020, Marcus Mariota will get a shot. If neither get it done, there will be a new starting quarterback in Las Vegas for 2021. Ruggs has the potential to be a mid-to-high end WR2 for years to come with some WR1 upside.

According to Dynasty League Football, Ruggs’ current start-up ADP is 77th overall and he is the 37th WR off the board. His rookie ADP is 10th, and he is the 5th overall WR in 1QB formats.

I currently have him ranked 14th, and he is my 6th ranked rookie WR. I have Henry Ruggs III ranked 78th in 1QB Dynasty rankings, slightly behind the RotoHeat consensus rankings that has him coming in at 76th overall. The team also has him ranked at #12 in the consensus rookie rankings.

I have Ruggs lower than the consensus in both my rookie and 1QB rankings. I do expect most of the rookies to a have less-than-ideal first season in 2020 due to COVID-19 and the reduced off-season programs, but I am a believer in the long term upside of Henry Ruggs III.

The DLF ADP of 77th is about right, and the 37th overall WR slightly high, but it is nothing that would scare me off of the pick. All rookies come with an element of risk, but I’m willing to select Ruggs in the early second round of rookie drafts and in the back of the 6th round in a start-up.

If you have yet to complete your 2020 rookie draft and are looking to acquire Ruggs, I would be targeting a pick in the 1.10-2.01 range to have a legit shot at drafting him. If your draft has come and gone and you’ve missed on selecting Ruggs, I would be comfortable moving a player like Christian Kirk, David Montgomery, or Zach Ertz straight up to make it happen.

Thank you for reading the Henry Ruggs III 2020 Dynasty Outlook.