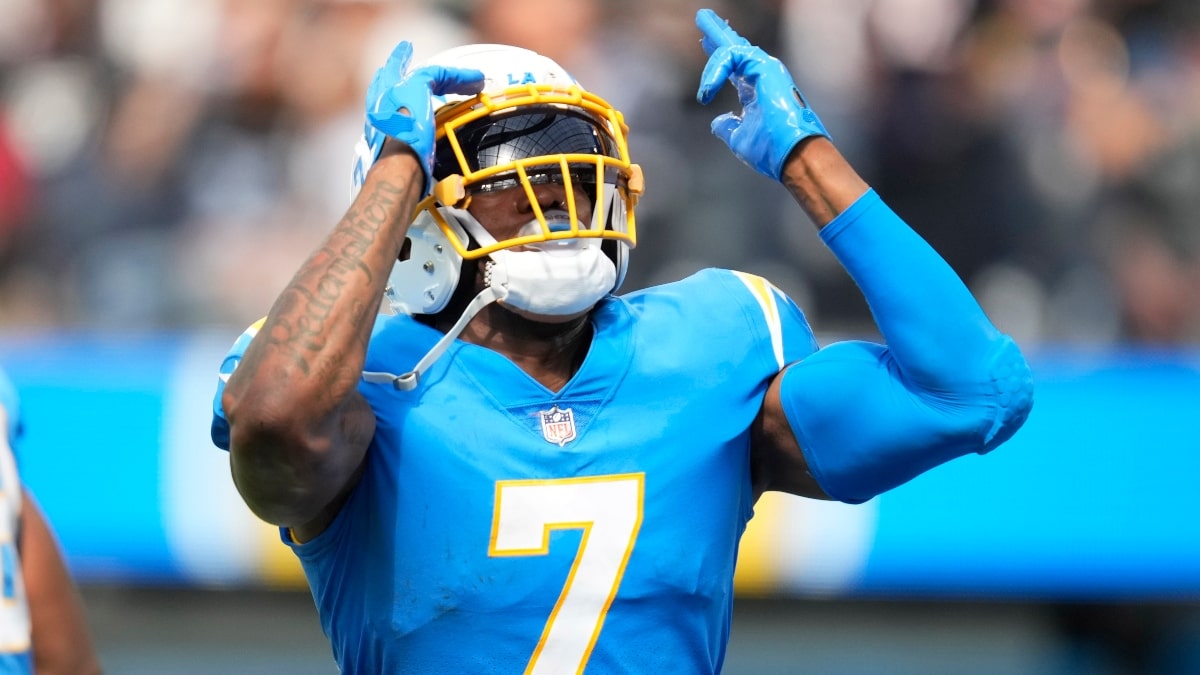 We now have two weeks of football behind us. As is the case from any week of NFL football, we learn something new, or we solidify our opinion from almost every game played. As such, we need to understand what is important and what is less so. That’s what we are here for at RotoHeat. To help you navigate the important stuff from the noise. To do so, I write a weekly article about the fantasy football takeaways I find most significant from the past week of games. These fantasy football takeaways are for 1QB, full PPR leagues.

These are my quick hit takeaways from Week 2.

Gerald Everett could be the best late tight end

A few weeks ago, I wrote about my favorite late tight ends to draft for fantasy in 2022. One player I did not have on that list was Gerald Everett. I thought the Chargers offense would funnel much more through Ekeler, Allen, and Mike Williams. However, QB Justin Herbert seems to target whoever is open more so than hyper-targeting one or two players. This has benefited Gerald Everett, who has 14 targets and a touchdown in the past two weeks.

Even if Everett’s targets dip when Keenan Allen comes back from injury, the Chargers have a very good offense and Everett could be in line for a touchdown every week as well as a handful of targets. You cannot ask for more from your late-round tight end, that can be picked up from waivers in a bunch of leagues.

Yes, I get it. It was a huge performance from the Miami Dolphins, with Tua Tagovailoa scoring 6 TDs and both his receivers, Jaylen Waddle and Tyreek Hill having huge games. But if we look beyond the 50 passes and the 469 yards from Tua, the Dolphins looked not only explosive but also decisive and smart.

Of the 50 passes, a combined 32 went to Hill (13) and Waddle (19). They also combined for 4 touchdowns at 2 apiece. Although the Dolphins won’t throw the ball 50 times every game, this game gave us a glimpse into Tua’s mind. If the Dolphins want to be competitive, Tua needs to get the ball to his two biggest playmakers. In this game he did, and they came back from an almost insurmountable deficit, on the back of Waddle and Hill.

Despite the concerns fantasy analysts and managers had going into the season, both wide receivers will remain top starts throughout the season, regardless of the opponent. Tua has shown a willingness to force feed the ball to his top men, keeping them firmly in starting lineups every single week.

RBs have largely been a disappointment through two weeks

This often comes out as a good idea mainly because the running backs have been repaying their owners on the steep draft price.

To begin this season, however, a lot of the running backs have been very disappointing.

On top of that, only one of the running backs that were top7 in ADP in the offseason is currently inside the top7 in running back scoring. That’s Jonathan Taylor. Mixon is #8, CMC is #9. Ekeler is #13. So far neither Henry nor Dalvin Cook is in the top20, and Najee is just inside at #19.

This gives heed to the draft strategies that have become more and more prevalent over the last few seasons: Zero RB or Hero RB. Both strategies involve taking zero or a single RB early and just stacking up on upside wide receivers and stacking your team with some of the best WRs out there, while other drafters are taking the running backs.

This could very well turn around, but right now, you are better off if you drafted a wide receiver in the first round of your drafts.

Coming into the season, the fantasy community was very high on Darnell Mooney, and over the final few weeks of preseason, the love for Dameon Pierce skyrocketed.

Neither player has been good to begin the season. Pierce has amazed just 14 fantasy points on 28 touches and Mooney has just 2 (!) points. Mooney has seen just 5 targets total, which seems absurd considering the lack of pass-catching talent on the Bears’ roster.

Neither offense looks very good, capping both players’ scoring upside. On top, Mooney is barely involved and Rex Burkhead is heavily favored when it comes to obvious passing downs, keeping Pierce mostly as a runner.

One of my fantasy football takeaways from this week is that there are only two players you can trust in your starting lineups for fantasy from these two teams. David Montgomery and Brandin Cooks. Monty has 32 carries and 5 catches (on 6 targets). Cooks has seen 22 targets through two weeks. Outside of those, everyone is a complete dart throw and is more likely to give you 4 points than to give you 12.

Those were my fantasy football takeaways from Week 2 of the NFL season. There are a lot more takeaways every week, but these are some of the most significant takeaways in my opinion.

Thank you for reading Fantasy Football takeaways from Week 2