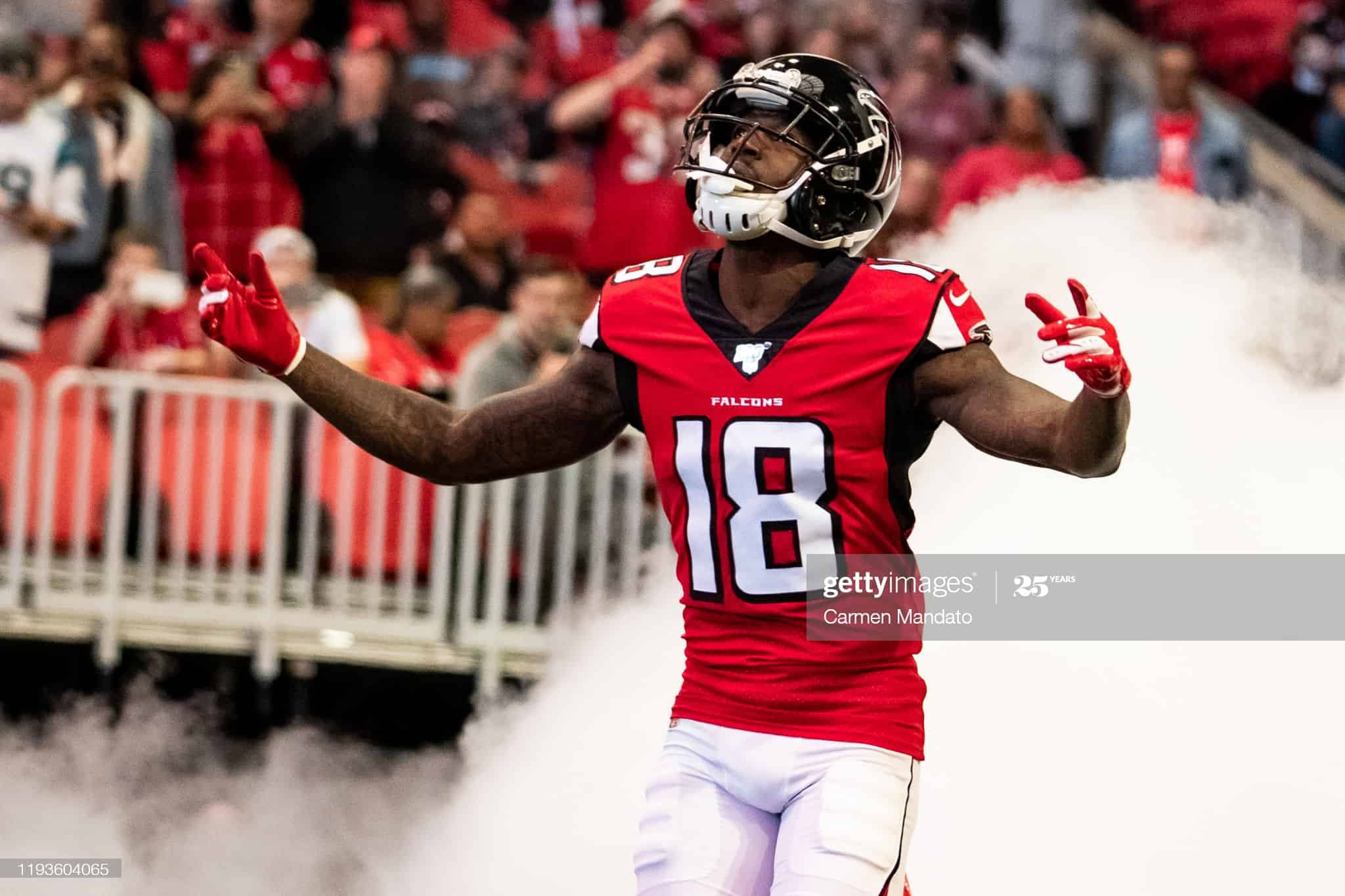 With the final whistles on Monday Night Football, we have reached the quarter pole of the 2020 NFL Season.  A season unlike any we have seen before. Injures have ravaged our fantasy players, and the Covid-19 Pandemic cost us one game, and nearly two others.

All teams except for the Pittsburgh Steelers and the Tennessee Titans have completed 4 of their 16 scheduled games.

Here is a look at the Wide Receivers after 4 weeks compared to my preseason rankings, as well as my end of season rankings- enjoy!

With the addition of CeeDee Lamb in the 2020 NFL Draft, I expected the Cowboys to spread the ball around and thus Amari Cooper would regress.  Well, so much for that theory, it appears through 4 games that Michael Gallup is the odd man out. Cooper has been over double digits in all four games and his season low fantasy production is 16 PPR points.  So much for Amari Cooper being an inconsistent fantasy asset.

When DeAndre Hopkins was traded to the Arizona Cardinals I had two thoughts.  1. He is probably going to struggle on a new team with no preseason, and 2. Bill O’Brien is going to get fired.  Well 1 out of 2 isn’t too shabby.  Hopkins has been great thus far; his 11.10 Week 4 was a blip on his 2020 resume that prior to last week showed an average game of 24.63 PPR points.

ATLANTA, GA – NOVEMBER 28: Calvin Ridley #18 of the Atlanta Falcons makes a cut during the second half of an NFL game against the New Orleans Saints at Mercedes-Benz Stadium on November 28, 2019 in Atlanta, Georgia. (Photo by Todd Kirkland/Getty Images) Fantasy Football Quarter Pole Top-12 Wide Receivers

I wrote a 3rd– year breakout article in February here at RotoHeat.  Calvin Ridley kicked off that article. Despite an injury slowed donut in Week 4, Ridley sits here at WR3 averaging 26.83 point a game in his first three.  In this pass all damn day offense in Atlanta and Julio Jones suddenly showing his age, I have Ridley atop the WR mountain at seasons end.

SEATTLE, WASHINGTON – SEPTEMBER 27: Tyler Lockett #16 of the Seattle Seahawks celebrates in the end zone after scoring a touchdown against the Dallas Cowboys during the second quarter in the game at CenturyLink Field on September 27, 2020 in Seattle, Washington. (Photo by Abbie Parr/Getty Images)

Tyler Lockett is an incredibly efficient WR.  The knock on him the past few seasons was limited targets.  Well it appears that Seattle is letting Russ cook, and Lockett is eating.  Lockett has a career high 110 targets a season ago, and is currently on pace for 132 this season.  Bad defense combined with a great QB = Tyler Lockett being a great WR to own.

Whoops I missed on this one.  I was firmly in the camp of Stefon Diggs being a backend WR2 in 2020. The thought was QB Josh Allen is not an accurate QB thus despite an increase in targets Diggs would struggle.  Well Allen has a 70.9% completion rate and Diggs has seen 23.6% of his targets. Allen is legit and Diggs target share if anything is likely to go up.

2019 was an injury plagued season for Thielen after breaking out with over 90 receptions and 1275 receiving yards in each of the past two seasons. My thought entering 2020 was Thielen would bounce back to his 130+ targets and as a result a top-10 WR season. The Vikings selected WR Justin Jefferson in the 1st Round of the 2020 NFL Draft, and JJ is making me rethink my original stance.  Thielen leads the team with 19 targets thru 4 games and is on pace for 76 this season.  That is a problem.

Tyreek Hill is a fun WR to watch.  He seems to be a big play waiting to happen in this Kansas Chiefs high-octane offense.  Averaging 18.75 PPR points a game with only a 19.33% target share is impressive.  Of all the WR’s on this list that I don’t have finishing the season as the WR1, Hill would be the least surprising to finish there.

If D.K. Metcalf secured the ball into the endzone in week 3, instead of a little too much show boating, he would have 8 additional fantasy points and he would be sitting at WR4 after four games.  Well like my Mother used to say, “If “ifs” and “buts” were candy and nuts, wouldn’t it be a Merry Christmas?” Like Tyler Lockett, D.K. has a seat at the table as Russ cooks in 2020.  Sitting right behind Lockett with 28 targets, D.K. will continue to improve and end up a top-4 WR this season.

Well I was one of the many to champion D.J. Moore this season and so far, I could not have been more correct.  What is that? Robby Anderson? Really?  Wow! Ok, so I did not see this coming as you can tell by my preseason ranking.  Good for Anderson, the talent was never in question here, it was the offense, the QB and the role in Carolina that concerned me.  Anderson has been in the slot a lot and Teddy Bridgewater has been better than expected.  Can’t get them all right, I guess.

Speaking of WR’s that I was wrong about, enter “Scary” Terry McLaurin.  By the way F1 is a much better nickname.  I was of the opinion that McLaurin would see the opponents top corner all season long and a safety over the top, thus double teams.  As a result, I figured he would struggle.  McLaurin is unique, he is both QB proof and matchup proof.  Enough said.

If you have followed my rankings this season, you will all know that I struggled with ranking Odell Beckham Jr.  Fist off I admit I am an OBJ truther, I love this WR.  The concern was (and still is), that the Cleveland Browns would be a run first and heavy team and as a result OBJ would struggle to see his usual target share. Well the Browns are the best running team in football through 4 weeks, and OBJ has seen 25.8% of his teams targets.  He is healthy and appears to be motivated.  That is a great combination.

TAMPA, FLORIDA – OCTOBER 04: Mike Evans #13 of the Tampa Bay Buccaneers runs for yardage after a catch against Casey Hayward #26 of the Los Angeles Chargers during the fourth quarter of a game at Raymond James Stadium on October 04, 2020 in Tampa, Florida. (Photo by James Gilbert/Getty Images) Fantasy Football Quarter Pole Top-12 Wide Receivers

There were plenty of folks that were concerned about Mike Evans entering 2020 due to the fact his new QB Tom Brady would struggle to take shots down the field at 43 years of age.  I bought into that slightly but not completely.  When I updated my WR rankings I stated I am likely too low on Evans, and I can now confirm it.  Evans has been slowed by injury to start 2020, it has impacted his production. Evans only has 17 grabs for 230 yards thru 4 weeks, the good news is he is tied for the league lead in touchdowns with 5.   He will be more involved in the coming weeks and he will finish the season strong.