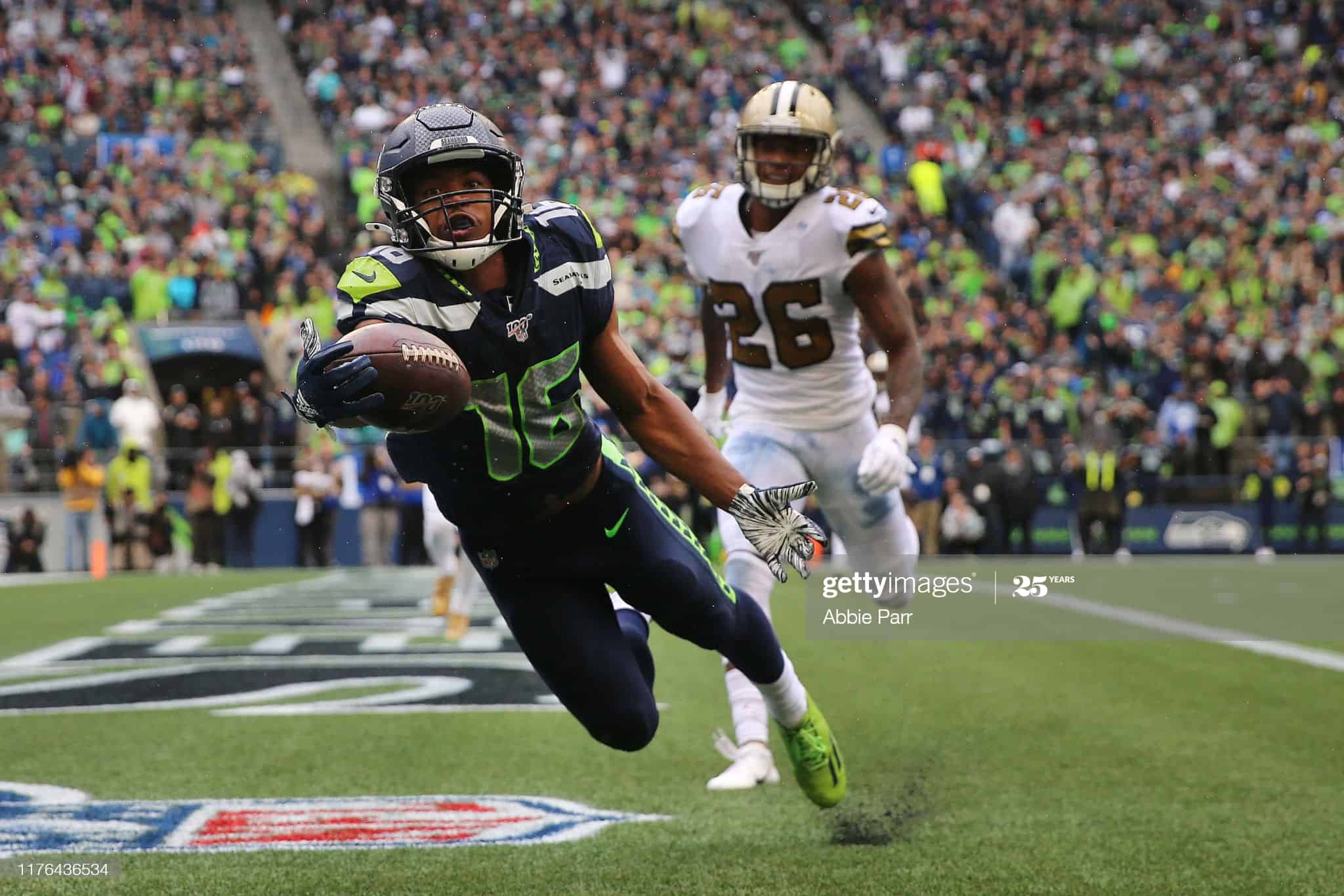 With the final whistles on Monday Night Football, we have reached the unofficial midway point of the 2020 NFL Season.  A season unlike any we have seen before. Injures have ravaged our fantasy players, and the Covid-19 Pandemic cost us one game, and nearly two others.

Several teams have enjoyed their Bye Week at this point of the season, making the average points per game all the more relevant. Here is a look at the Top-12 Wide Receivers after 8 weeks compared to my preseason rankings- enjoy!

GLENDALE, ARIZONA – OCTOBER 25: Tyler Lockett #16 of the Seattle Seahawks reacts after catching a touchdown while being defended by Patrick Peterson #21 of the Arizona Cardinals during the second quarter at State Farm Stadium on October 25, 2020 in Glendale, Arizona. (Photo by Norm Hall/Getty Images) Fantasy Football Midway Point Top-12 Wide Receivers

Seattle Seahawks WR Tyler Lockett was sitting at WR4 overall after 4 weeks this season. He was averaging 19.95 PPR points/game over that span. In weeks 5-8 Lockett on the strength of a 53 point Week 7 has elevated his average points per game to 21.21 and sits a top the WR scoring thru 8 weeks. Seattle has had their bye week, and Lockett remains a top weapon in a suddenly explosive passing attack. Barring injury Lockett should end up a top 8-10 WR this season.

I wrote a 3rd– year breakout article in February here at RotoHeat.  Calvin Ridley kicked off that article. Despite an injury impacted zero in Week 4, Ridley sat at WR 3 after 4 weeks. In weeks 5-8 he dipped to WR9 in overall scoring with 68.70 points. Ridley was injured early on in his week 8 match-up and is questionable for Week 9. The Falcons are on bye in Week 10 so it is possible we don’t see Ridley back on the field until Week 11 at the earliest. In this pass friendly offense in Atlanta, as long as Ridley can get back on the field soon, he will enjoy his first top-12 WR finish.

I am a big D.K. Metcalf fan. I had him as the No.1 WR coming out last season and 5th overall. With that said even I didn’t see this coming. Metcalf is making my preseason rank look laughable. Thru the first 4 weeks of the season he sat at WR8 with 72.30 PPR points. In weeks 5-8, Metcalf sits at WR6 with 71.70 points in 3 games played. His season long average of 20.57 points per game trails only Devante Adams (27.04) and teammate Tyler Lockett (21.21). Metcalf is a force and in the Russell Wilson led offense is a top-5 WR rest of season.

When DeAndre Hopkins was traded to the Arizona Cardinals I thought that it was likely that he would struggle on a new team with no preseason. Well apparently Nuk, could care less what I think.  Hopkins has been great thus far, after 4 weeks he was WR2 averaging 21.18 PPR points a game. In week 5-8 he cooled slightly sitting at WR17 overall in three games played. He remains the No.1 target in the Cardinals offense and he will have plenty of 20+ fantasy point days to conclude the season.

Tyreek Hill is a fun WR to watch.  He seems to be a big play waiting to happen in this Kansas Chiefs high-octane offense.  Averaging 18.75 PPR points a game with only a 19.33% target share thru the first 4 weeks was impressive.  In weeks 5-8 he saw his average dip to 16.78 points per game thanks to a 5.50 Week 6. Week 6 was his only game on the season below 15 fantasy points. Hill is an elite WR that seems to be good for a touchdown weekly as his floor. Tyreek Hill remains my dark horse for WR1 overall this season.

I whiffed on this one, no doubt. I was firmly in the camp of Stefon Diggs being a back-end WR2 in 2020. The thought was QB Josh Allen is not an accurate QB thus despite an increase in targets Diggs would struggle.  Well in the first 4 weeks Josh Allen was on fire and Diggs was averaging 19.58 points a game. Allen has cooled off and Diggs has seen his average drop down to 15.80 a game. He will need Josh Allen to find that early season form if he is going to remain in the top-12 this season. Diggs is WR6 currently and his points per game has him ranked at 12 heading into his bye week.

GREEN BAY, WISCONSIN – NOVEMBER 01: Eric Kendricks #54 of the Minnesota Vikings defends a pass intended for Davante Adams #17 of the Green Bay Packers during a game at Lambeau Field on November 01, 2020 in Green Bay, Wisconsin. The Vikings defeated the Packers 28-22. (Photo by Stacy Revere/Getty Images)

What can you say about Devante Adams this season. He is averaging nearly 7 PPR points a game more than any other WR this season. Simply put when he is on the field he’s as good as they come. The problem is Adams has only appeared in 5 games this season. In those 5 contests he has two games over 41 points and another over 30. Aaron Rodgers has bounced back and the Packers still have little in terms of pass catching talent other than Adams. If he stays healthy he will be the league’s top scoring WR this season.

All offseason I kept telling everyone who would listen that Tyler Boyd’s ADP was a ridiculous value. This is a WR that I gobbled up all over the place in the 5th and sometimes 6th round. When I was drafting him I was drafting a mid WR2, what I didn’t realize is that I struck gold and found a WR1. Boyd has finished with double digit PPR points in 6 of his 8 games this season and has topped 20 PPR points 3 times. Rookie QB Joe Burrow is throwing a ton and the volume for Boyd should remain. I don’t see him lasting in the top-12 much longer but a high WR2 still exceeds his ridiculously low ADP.

One can not help but wonder how good Allen Robinson would be with a good QB, hell even an average QB would be a massive upgrade. Robinson was on the outside looking in on the top-12 after 4 weeks sitting at WR13 averaging 17.50 PPR points a game. In week 5-8 he fell even further to WR16. Robinson currently sits at WR9 thanks mainly due to his team has yet to have a bye. A-Rob is WR20 in points per game at the midway point this season. He has all the talent in the world to be a top-10 WR, and he is forever limited by his QB, regardless of the name on the back of the jersey.

After the first 4 weeks of the 2020 season, Cowboys WR Amari Cooper was the top dog among Wide Receivers with 85.10 PPR points. Well after the loss of Dak Prescott, Cooper dipped and dipped dramatically. In Week 5 when Dak was injured, Cooper totaled 4.10 points, was good in week 6 & 7 averaging 18.20 points a game and crashed hard in Week 8 with 1.50 points. In total Cooper went from WR1 in the first 4 weeks to WR33 in the next four weeks. The Cowboys have no idea who there QB is going to be rest of season and regardless of who it may be, Cooper will fall out of the top-12 and be a mid to late WR2 at seasons end.

Of all the WRs that are currently in the top-12, the biggest surprise has to be Robby Anderson. Anderson landed at WR11 after four weeks of action and remains there after 8. He has been extremely consistent all season long. His Week 8 outing in terrible weather is the only game this season that he has failed to exceed 10 PPR points, and he has gone over 20 once.

He is a mid teens PPR point machine this season. In the end I believe that he falls out of the top-12, and that has more to do with names like D.J. Moore, Adam Thielen, and Terry McLaurin who are right on his heels. Thielen and McLaurin have also both had their bye and Carolina has not.

All Robert Woods does is beat his ADP. He has finished north of his ADP in all 7 of his NFL seasons and is well on his way to making it 8 in 2020. Woods is currently second in targets, receptions and yards to teammate Cooper Kupp, but leads the team with 4 touchdowns. In his previous two seasons on 176 receptions Woods totaled 8 scores. Having 4 this season at the midpoint on 37 catches, would indicate that second half regression is likely. Woods will be a high end WR2 this season and once again eclipse his ADP.