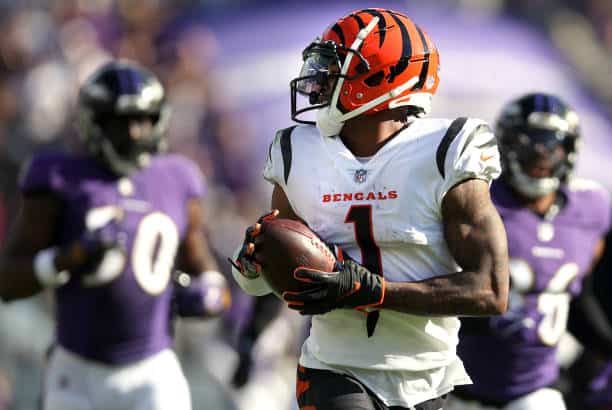 We are now 7 weeks into the football season and you are now getting to see if you are a contender to make playoffs or not. Which players are going to help you continue to compete and which are holding you back.

Typically rookie receivers are not top performers their rookie year outside of the outliers like Justin Jefferson and Odell Beckham Jr. Chase will be joining that list and appears to be exceeding both of the players just mentioned. Chase is on track to be a top 5 fantasy WR this year with a legitimate chance to be WR 2 behind Cooper Kupp. Chase has yet to put under 13 fantasy points this season and has become a top fantasy asset this year with no indication of that changing anytime soon. That Burrow and Chase connection is a force to be reckoned with this year.

The time has finally come, AJ Brown is healthy and producing. WIth back to back solid fantasy performances we can finally feel comfortable plugging AJ Brown in our lineups. He was highly drafted in most redraft leagues, and after being on my cold players he has made his way on the right side of this weekly article. With Julio’s inability to stay healthy and lack of utilization in the red zone. Look for AJ Brown to continuously be a solid fantasy performer. He is on back to back weeks with 15+ fantasy points.

Swift is undoubtedly the best player on that horrible Lions offense. He is one of the few backs in the league that benefit from the Lions constantly trailing. His ppr value gives him a similar value to running backs like CMC and Alvin Kamara. Swift has seen no less than 5 targets in each game this year and has scored over 20 fantasy points in over half of his performances. This guy went later than he should in most redrafts and those who got him are reaping the reward.

Gibson is on back to back weeks of less than 10 fantasy points and it is concerning. Gibson will be playing this season with a fractured shin and injuries like that do not just heal over a bye week. He is not the go to back in passing situations which takes away a lot of value in ppr formats. WIth Gibsons lingering leg injury and his lack of use in passing situations fantasy owners should be worried with his usage the rest of this season.

WIth the emergence of Ja’Marr Chase and the utilization of Tee Higgins, Tyler Boyd has become a forgotten piece in the Bengals offense. Boyd is still involved with a decent amount of targets but is still being overshadowed by the younger talent. Boyd is on back to back weeks below 10 fantasy points and has become more of an ideal player to stream during the bye weeks. If your team is low on depth and you are forced to start Boyd you shouldn’t feel too bad about it but Boyd seems to be the 4th option on that offense behind Chase, Higgins, and Mixon