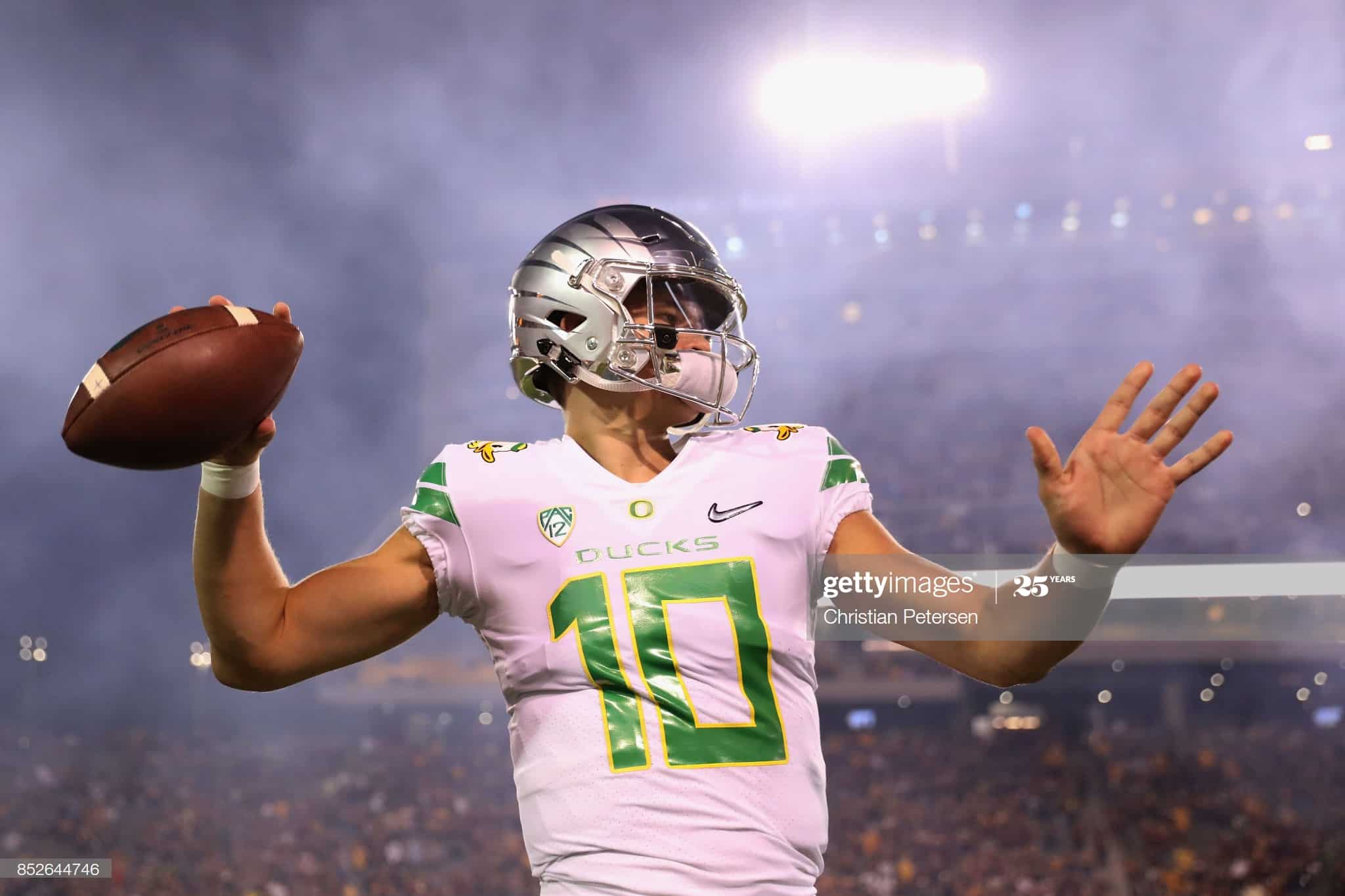 In the second installment of this 8-part series we review the Fantasy Draft Grades in the AFC West.

The Denver Broncos, like the rest of the NFL, are challenged with trying to keep pace with the Super Bowl Champion Kansas City Chiefs. This is especially important when you share a division and face them twice a season.

Denver has a star receiver in Courtland Sutton who can win one-on-one downfield on the perimeter and hurt teams with in-breaking routes. Where they needed to upgrade was the “Z” receiver role. The guy who can go in motion, run every route at every level and contribute via yards-after-catch. They filled that role beautifully with Alabama WR Jerry Jeudy. Jeudy is the best route runner coming out of college this season and perhaps in this era. The Broncos addressed a glaring need with a stylistically perfect prospect and they didn’t have to trade up to do it.

After rounding out the outside spots in their receiving corps, the Broncos added a shifty weapon inside in slot receiver KJ Hamler. It won’t be hard to predict where Denver’s wide receivers will line up on any given play, but with three players so perfectly suited for their roles, it may be hard to stop them. Add sophomores Drew Lock and Noah Fant to the offense along with new Offensive Coordinator Pat Shurmur, and RB Melvin Gordon, and the Broncos at least on paper look like a potent offense.

Albert Okwuegbunam in the 4th round wasn’t a pick I loved for Denver or the player. With Noah Fant clearly the lead TE in Denver, Albert O will mostly be asked to be an in-line blocker versus having his number called to run routes. This is good for the Broncos but not so much for the player and fantasy results.

Denver rounded out their skilled position selections with Tyrie Cleveland in the 7th round. Cleveland projects as a developmental WR with rawness in his route running. Cleveland’s size and speed may help him land a special teams role in 2020.

It’s rare to win the Super Bowl and not lose a bunch of guys in free agency, but that’s the position the Chiefs are in, which means they entered this draft able to (mostly) draft for luxury instead of need.

I wasn’t expecting Clyde Edwards-Helaire to be the first running back taken in the draft, and I also wasn’t expecting the Chiefs to take a RB this early. For CEH going from the high profile LSU offense and Joe Burrow, to the Chiefs and Patrick Mahomes has all the markings of a dream come true for the RB and for his dynasty managers.

Edwards-Helaire has the type of burst, lateral agility and quickness to create his own space as a runner, and he is a diverse weapon in the passing game. That passing game is what will push CEH to the top 5 in your rookie drafts regardless of format. Being compared to Maurice Jones Drew, Brian Westbrook and LeSean McCoy doesn’t hurt his value much either.

When the then Oakland Raiders traded for WR Antonio Brown, it was evident that Jon Gruden badly want a stud wide receiver. If all goes as planned, they may now have one who can actually be counted on. Henry Ruggs III has effortless, jaw-dropping speed, and he can produce at all three levels. That’s notable because few offensive architects are as creative and diverse in three-level passing concepts as Jon Gruden. Ruggs also presents terrifying big-play potential on jet sweeps and quick screens.

Last season, the Raiders had far fewer 20-plus-yard air throws than most teams. That should change now, though to make the Ruggs pick fully worth it, the question remains do the Raiders have the QB to support the vision of the offense? You can bet Gruden will ride Derek Carr even harder about playing aggressively, and if he isn’t successful, he can go with the also ultra-conservative Marcus Mariota.

While Ruggs brings a speed dimension, the two third-round selections could actually fit the current Raiders QB play even more. Depending upon the host site you play on, Lynn Bowden Jr. is being listed as RB, WR, or both. Bowden Jr., brings a gadgetry dimension, and regardless of his fantasy distinction should have a negative impact on second year RB Josh Jacobs.

Bryan Edwards projects as a strong candidate to serve as a complimentary starter at the NFL level. Edwards may be best off as a slot target. He frequently won his routes from the slot as a middle of the field receiver and struggled most with separation when trying to press and sell vertically on the boundary. If he can sure up his hands, his ceiling grows. Edwards’ game meshes well with both Raiders QB’s and projects (if healthy), to impact Hunter Renfrow and Darren Waller negatively.

PASADENA, CA – SEPTEMBER 07: UCLA Bruins running back Joshua Kelley (27) carries the ball to the outside during the college football game between the San Diego Aztecs and the UCLA Bruins on September 07, 2019, at Rose Bowl in Pasadena, CA.(Photo by David Dennis/Icon Sportswire via Getty Images) Fantasy Draft Grades – AFC West

After the decision was made to move on from Franchise QB Phillip Rivers, as well as the failed attempt to sign Tom Brady, the Chargers were wise to select Oregon QB Justin Herbert with the 6th overall selection.

Herbert is presented with a golden opportunity in LA, being surrounded with weapons such as Keenan Allen, Hunter Henry, Auston Ekeler and Mike Williams. Herbert may have to wait a while to take over the offense from Anthony Lynn’s BFF Tyrod Taylor, however. Regardless of how long Herbert has to carry a clipboard, he is worthy of a top 10 pick in Super-Flex rookie drafts and a mid to late second in 1QB formats.

Running back Joshua Kelley is a solid replacement for the departed Melvin Gordon, and likely spells the end for Justin Jackson. Kelley has good speed and he will break his share of tackles. He is a physical runner that will challenge defenders and he possesses the power in his lower half to absorb contact and sustain his momentum. He did well behind a poor UCLA offensive line which should benefit him in LA with their mediocre offensive line.

Joe Reed and K.J. Hill give the Chargers some depth at the WR position. Reed gives LA an option in the return game. In his four seasons at Virginia, Reed totaled 106 kick returns for 3,046 yards and 5 touchdowns. Hill, the all-time receptions leader, has been compared to DaeSean Hamilton. Hill is a dependable receiver, and that may see him earn a few snaps in the slot behind Keenan Allen if he makes the roster.