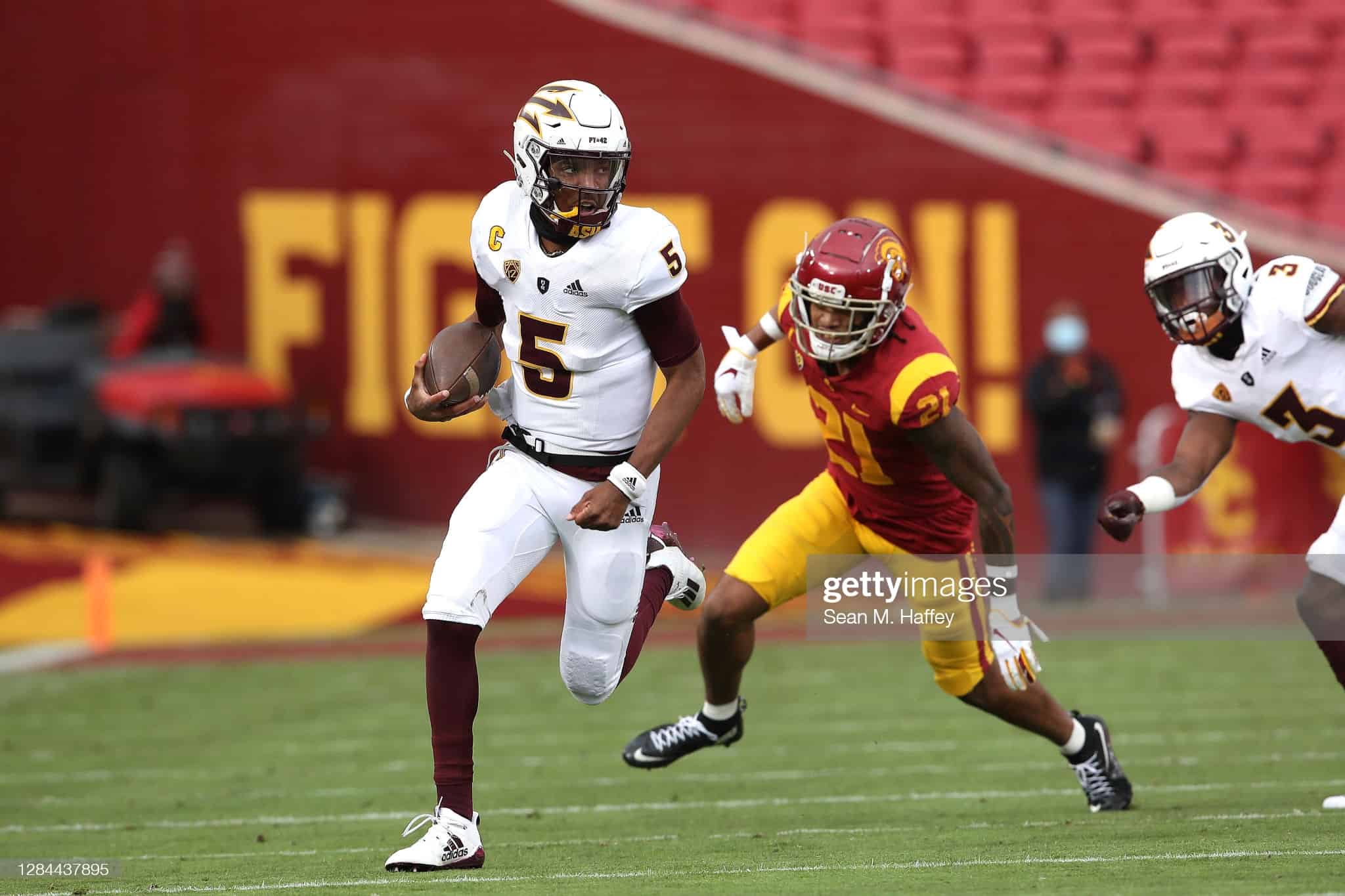 As we wrap-up the 2021 draft season, we begin to turn our attention to the upcoming season. I wanted to take a moment and give you some names to watch as we discuss devy fantasy football quarterbacks that could push for 2022 NFL Draft consideration. As we near the upcoming college season, these are players that I’m keeping an eye on to see how they’ve developed with another offseason of coaching at the college level.

The 6’1″, 225 lb. Howell from Monroe North Carolina has continued to develop nicely between the 2019 and the 2020 season, improving in completion percentage, air yards per attempt and QB rating (per Sports Reference). I know I’ve read people using the Baker Mayfield comps, and I don’t hate that. He’s got plus mobility, though he’s not had to run more than 94 rushing attempts in a single season. His arm strength is above average and probably even better than that, honestly, and some are already considering him the top of the quarterback class whenever he decides to come out.

The grad transfer from Oregon never really got much time to show what he can do for the Ducks, and looks to take his talents to the Red Raiders of Texas Tech. In his one season at the helm for the Ducks, Shough completed 63% of his passes for 1,559 yards and 13 touchdowns, while adding 66 carries for 271 yards and 2 touchdowns. When you watched film of him from 2020, you saw the team use him similarly to Chargers’ star, Justin Herbert, showing off the plus arm strength and above average athletic ability. If Texas Tech can help him take the next step in their high-powered, up-tempo offense, he could be a steal in your devy leagues.

Some would say Slovis took a step back, as all his stats went down between 2019 and 2020, but in just 6 games, I tend to lean towards a mulligan for the talented signal caller. Slovis has shown off great mechanics with the ability to get rid of the ball quickly and really has a solid deep ball. If he can get back on track in 2021 with USC, I think he can rebuild his upward trajectory towards being a nice NFL prospect, especially when you look at what’s in the league currently.

Another quarterback that didn’t get a lot of action in 2020, Daniels was one of the top dual-threat options in the 2019 recruiting class. Daniels has a quick delivery but good touch on his passes and can be a real threat in the ground game. When you watch Daniels, you can tell he’s more than capable of running the spread offense with ease, showcasing the ability to read defenses at a fast pace and find the holes in the coverages.

Rattler turned in a solid showing in 2020 for Oklahoma, and he continued to grow from the top quarterback prospect in 2019 to what could be a highly drafted quarterback when he enters the NFL Draft. When you watch Rattler play, you can tell he’s a fairly natural passer with the ability to make unconventional passes with relative ease. From what I’ve seen thus far, he looks the part of a natural leader and has that “it” factor teams look for in their franchise quarterback.

Daniels, the USC transfer, didn’t get much chance to show what he can do in the SEC, only seeing 4 games of action. In the 4 games of action he did see, you saw a 67% completion rate, 1,231 yards, and 10 touchdowns to just 2 interceptions. Daniels has solid mechanics, delivery, accuracy and a strong pocket awareness but just an above average arm and athletic profile.

We saw the best version of Corral in 2020, where that big arm was on display regularly putting up over 10 air yards per attempt on his way to 3,337 passing yards and making a case to be one of the better quarterbacks in the SEC in 2021. Corral is a plus athlete with good, quick feet, and from what I saw is a very smart passer that did a good job of leading Ole Miss and should do so again this year.

Thanks for checking out Dynasty Fantasy Football Quarterbacks!

For more great Fantasy Football content, subscribe to our website,  YouTube Channel and follow us on Twitter. Be sure to head on over to rookiedraftguide.com for all our rookie player reviews for both 2021 Offensive and Defensive prospect breakdowns. Become a VIP for only $6 to view all eight category rankings, and view the strengths and weaknesses our team has identified for each player.2021 will be White’s