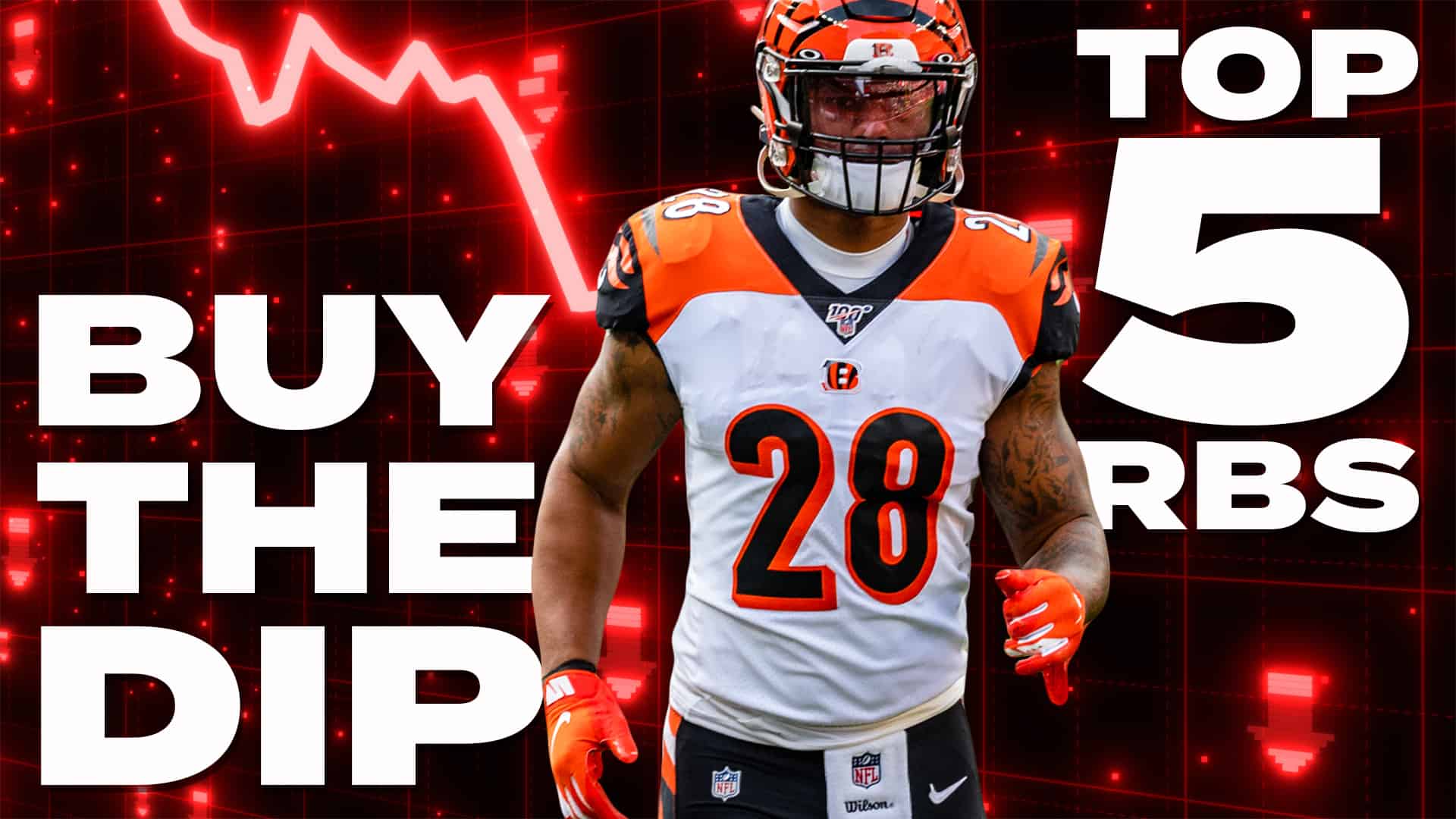 Who doesn’t love a good dip? Salsa, Guacamole, maybe even some Chili Cheese? Oops, sorry, we’re talking today about a different kind of dip. Oh, and not those skinny dips you took at the lake back in college. Rather, we’re talking about something even better! Running back dips–insane values at desirable prices. “Buy the Dip, and win the ‘ship!“

You’ve probably heard someone say something like this before…, “I’m never owning/drafting so-and-so again, they burned me sooo bad this past season!” This is probably one of the worst things any fantasy manager can say. I’ve learned over the years, fantasy football is not about the past. Instead, it is about the present and near future.

Of course, we have to look at the past to see stats and former trends to try to predict what will happen. However, simply because a player has a down year or two, that does not mean they cannot be valuable going forward. Sometimes athletes get a bad rap and the narrative about a specific player can severely drive down their cost or perceived value. Other times, a player is deemed too old of an asset and will either get hurt or replaced soon. Fortunately for you, sometimes these poor perceptions are exactly what is needed for you to be able to round out your team. The most skilled fantasy managers take advantage of these opportunities and scoop up the value other owners seem to leave behind. With that said, buy the dip, and target our Top 5 Buy Low Running Backs for 2021 in your leagues.

Chris Carson may be the oldest running back on our Top 5 “Buy the Dip” list, but he still packs a heck of a punch. Heading into this past off-season, Carson was a free agent looking for a new place to call home. Seattle drafted Chris Carson in the 7th round of the 2017 draft, but it wasn’t before long he was atop the depth chart. His breakout season was the following year in 2018. Carson gained over 1,100 yards and scored 9 TDs on the ground that season. Since his rookie year four seasons ago, Carson has gained 3,270 yards, scored 21 TDs, and has also caught over 100 balls and scored an additional 7 touchdowns through the air. Drafted in the 1st round of the 2018 draft, Rashaad Penny was Seattle’s original plan for a lead back, but Carson has continually thrown a wrench in those plans year after year. That’s why this past off-season, even though Carson was a free agent, Seattle opted to re-sign Chris Carson to a three year deal essentially locking him down as the lead back for at least 2021.

It’s not every day you can find a potential RB1 for a late RB2 price. Chris Carson is currently the 22nd RB off the board in our updated ADP. In this Superflex ADP that makes him the 68th player selected, and to put that in perspective, the 20th RB off the board is David Montgomery–fifteen full spots higher at 53 overall! That’s exactly what we mean by saying, “Buy the Dip!” Chris Carson is on a good offense led by one of the best quarterbacks in the league, Russell Wilson. In Carson’s four year career, he is averaging over 4.5 yards per carry. He has virtually no competition for early down work and he has continually proven he will run the ball effectively and will always add catches out of the backfield as well.

James Conner unexpectedly jumped on the scene in 2018 as well after Le’Veon Bell held out in search of a pay day. He showed elite abilities both rushing on the ground for almost 1,000 yards and receiving passes from Big Ben. He ended the season with double digit TD’s and locked himself into the RB1 spot for the following two seasons for the Steelers. Unfortunately, Conner continually dealt with injuries and never truly lived up to his full potential in Pittsburgh.

Now in Arizona, Conner is arguably the best running back the Cardinals have on their roster. Sure, Chase Edmonds is still there and has shown good skills here and there. However, Conner is a more complete back and is the favorite to get touches as long as he can stay healthy. Kenyan Drake has left for Vegas, so at worst he will be used in the same role Drake had. However, I believe Conner is a better runner than Edmonds is, and I expect him to get a large share of the early down work as well. Health is and always has been a concern for Conner, but with his current ADP (Startup Dynasty Superflex) of #39 at the RB position (#141 overall) there is just too much value to pass up at that price. Especially when you consider Edmonds is going as the 28th RB off the board and over 40 spots higher in overall ADP – Buy the Dip, and get James Conner on your squads at an incredible bargain.

The “draft darling” of the 2020 draft, Clyde Edwards-Helaire (CEH) shot up draft boards last Spring after Andy Reid and the Kansas City Chiefs selected him in the 1st round. To add fuel to the fire, presumed starter Damien Williams opted out of the season, which essentially cleared the way for CEH to produce. After a huge game in week one, however, Clyde Edwards-Helaire never lived up to the hype. In 13 games he finished with only 803 yards on the ground and 4 rushing touchdowns. He only added 35 catches with 297 yards through the air and one additional touchdown. The Chiefs also brought in Le’Veon Bell midway through last season which ultimately took away some of his touches. These reasons led CEH to lose a significant amount of value from this time a year ago.

Even though CEH underwhelmed, there is a lot of reasons to be optimistic for his production in this upcoming season. First, he will have a full off-season to prepare, unlike last year’s COVID-riddened season. Second, he again is atop the team’s depth chart, and with Le’veon Bell and Damien Williams long gone that leaves the next best running backs on the team as either Darrel Williams or Darwin Thompson (no offense to the Elijah McGuire truthers out there). Last but not least, the Kansas City Chiefs put a lot of energy (mostly money) into improving their offensive line. Renowned Sportswriter Peter King said that the Chiefs GM Brett Veach “maneuvered the cap and signed/drafted/traded for a new offensive line (with the exception of returning tackle Mike Remmers). In Week 1, Orlando Brown/Joe Thuney/Austin Blythe/Kyle Long/Remmers should be a top 10 NFL offensive line—a vast improvement from number 32 at season’s end.” There is no doubt an improved offensive line will provide CEH with better running lanes, and he should turn into the top ten running back people were projected last year. Buy the dip before it’s too late!

Coming in as the 2nd best running back who you should “buy the dip” on, Ezekiel Elliott of the Dallas Cowboys currently showcases phenomenal value at the moment. His Superflex ADP has dropped from a top 12-15 overall player in recent years all the way down to #29. In fact, in our Startup Dynasty ADP he is currently the 12th running back off the board! Many on our team are of the belief that RB #12 is his FLOOR and he is almost guaranteed to surpass that this season and in future seasons to come.

The Cowboys are on track to have one of the best offenses in the NFL this season. Without Dak Prescott last season, the offense struggled left and right. However, he will be back healthy, and the offense should be ready to put up massive numbers. Amari Cooper, CeeDee Lamb, and Michael Gallup will ensure that defenses cannot stack the box against Zeke. Blake Jarwin, who tore his ACL week 1, will also be back to help round out the offense. As part of one of the most dynamic offenses in the league Ezekiel Elliott should definitely be one of your off-season targets. When you can get a potential top 3 back with an almost guaranteed RB1 floor, don’t hesitate, and get him on your team as soon as you can.

The best “buy the dip” running back our team has pin-pointed is none other than Cincinnati Bengal’s own Joe Mixon. Both Ezekiel Elliott and Mixon share some similarities besides joining each other on our list. Both are proven RB1’s, and both had below-average offensive lines to work behind. While both of these team’s offense lines are still in question, there is no doubt that each offense should be better as a whole this season. Both starting QBs for each respective team (Dak Prescott/Joe Burrow) suffered season ending injuries, but both are on track to return by the start of this season. Joe Mixon suffered a foot injury himself and missed the last half of the season. Bengals Head Coach Zac Taylor spoke on Mixon’s injury recently and said he “feels good” and “is working out.” There is no reason to believe at this point after more than a full off-season that Mixon will not be ready to go as soon as the new season kicks off.

Prior to Mixon’s foot injury last season, he was averaging 16.6 points per game which would have put him as RB #11 on the year had he maintained that pace. Mixon is still young and will only be 25 by the time Week 1 rolls around. His current ADP in our Dynasty Startup Superflex data is #43 overall and the sixteenth running back off the board. The value for Mixon is incredible, especially considering just last season he was typically being drafted in the late 1st or early 2nd round of drafts. The Cincinnati Bengals figure to be one of the most improved offenses next year with Burrow, Mixon, and rookie WR Ja’Marr Chase ready to keep defenses in check. Securing Joe Mixon on your dynasty team now at a value is one of the smartest moves you can make for your team. Mixon, along with our other running backs discussed, are the players you need to “buy the dip” on so you can win your ‘ship!

Thank you for reading Buy the Dip: Top 5 Buy Low Running Backs for 2021