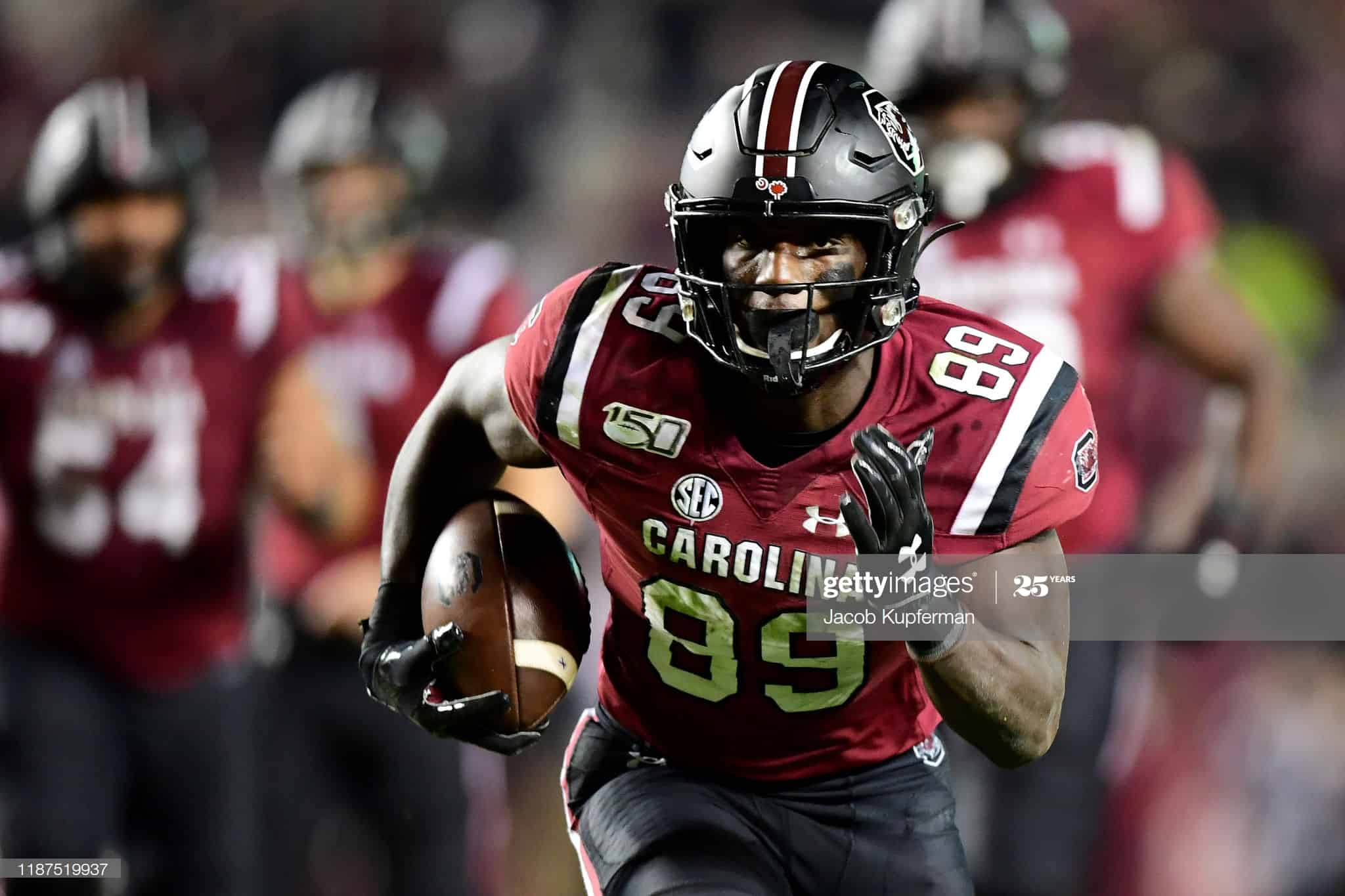 Bryan Edwards was drafted by the Las Vegas Raiders in the third round with the 81st overall pick of the 2020 NFL Draft.The Raiders obtained this pick along with two first round picks as part of the trade that sent defensive end Khalil Mack to the Chicago Bears.

Edwards spent 4 seasons at South Carolina, and he leaves the Gamecocks program:

Like former teammate Deebo Samuel, Edwards never had a truly dominant seasons for the Gamecocks, but he’s a four-year SEC starter who had a small breakout as a freshman and then consistently produced in his three final seasons.

Edwards combines size and speed, as he’s 6’3″ 212 lbs and had a 4.53 40-yard-dash. He isn’t overly quick and he takes a bit to get up to full speed, but what Edwards lacks in quickness he more than makes up for it with his physicality.

One area of concern for Edwards is the extent of his foot injury. Edwards suffered a knee injury late in the season that eventually ended his collegiate career. While the injury forced him to miss the conclusion of the season,  it was not deemed a long-term issue. While preparing for the NFL Scouting Combine, Edwards broke his foot.

Had Edwards participated in the Combine and showed well, he likely would have been in the conversations with Brandon Aiyuk, Michael Pittman, and Denzel Mims. His sliding to the third round in the NFL draft instantly created some dynasty value.

He might not play much as a rookie, but where I do see him playing a role is in in the red zone. Another area the benefits Edwards snaps is his ability to block. Rookies that can block will see the field, and being on the field creates opportunity.

The Raiders currently list Edwards behind Tyrell Williams, Henry Ruggs, Hunter Renfrow, Zay Jones and Nelson Agholor on their depth chart. This early in the offseason, depth charts need to be taken with a grain of salt. I do see Edwards surpassing Agholor and Jones at some point in 2020, but I do believe his targets will be minimal.

Zay Jones is in the final year of his contract, and the Raiders could easily part ways with Tyrell Williams after the 2020 season, which means that in 2021, Edwards could be a starting receiver for the Raiders alongside the first-rounder Henry Ruggs and slot man Hunter Renfrow.

I currently have Edwards ranked 24th in my rookie rankings. He is my 12th ranked rookie WR, and Edwards failed to make my top 200 in 1QB Dynasty rankings.

I believe that Edwards will end up with a role in the Raiders offense going forward, but I do not think that this is an overly special talent that anyone should reach for in their drafts.

In a rookie draft I would much rather select Laviska Shenault, Zack Moss, or Antonio Gibson, all of whom are listed behind Edwards and his 17th ranked ADP.

In a start up draft ,when you get down to the 100th spot where Edwards resides, I am instead going to select players like Diontae Johnson (103), Curtis Samuel (106), and Preston Williams (115).

Thank you for reading the Bryan Edwards 2020 Dynasty Outlook