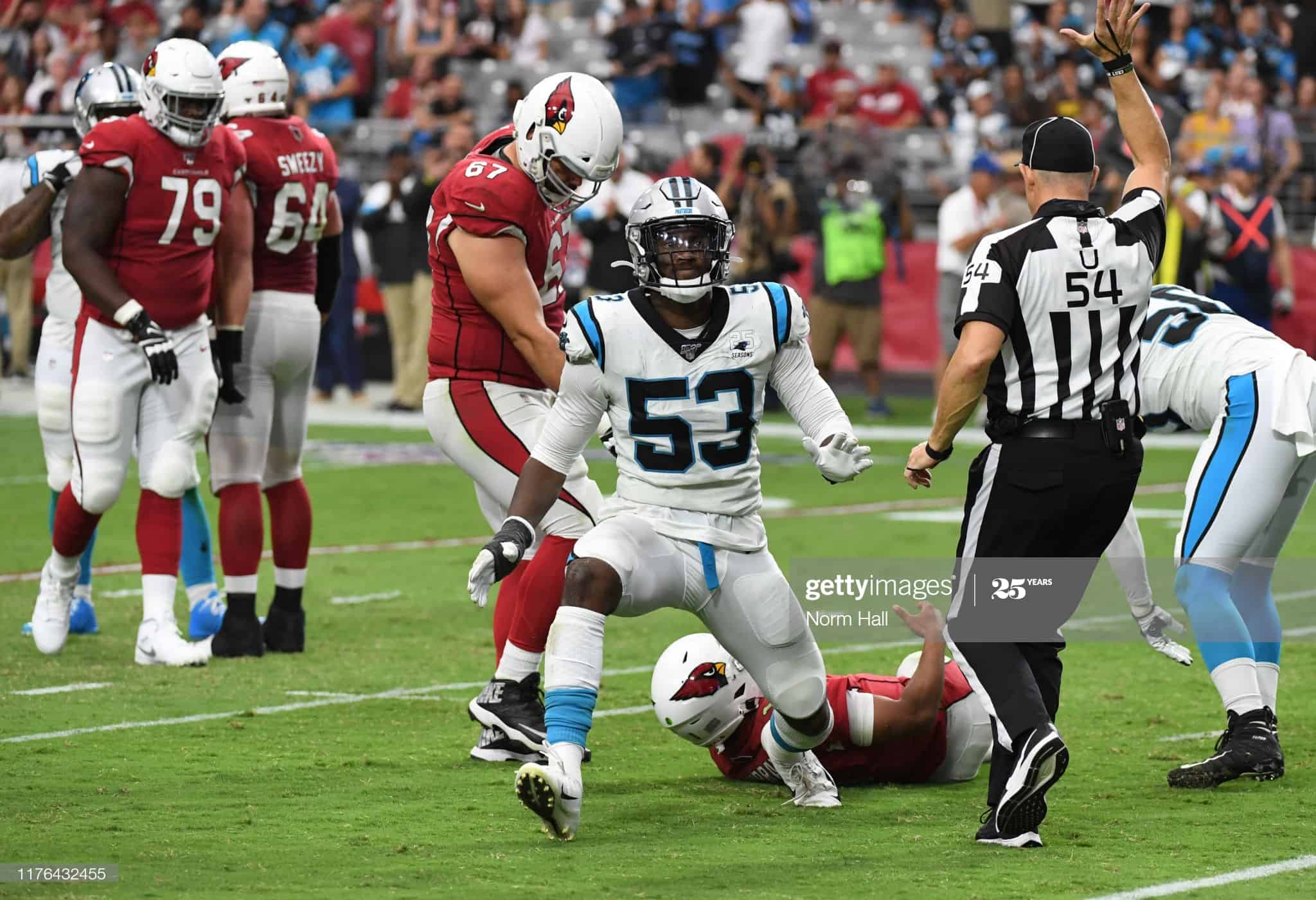 As a four star recruit out of Florida, Brian Burns had offers from Alabama, Georgia and Florida, among others, before committing to Florida State. 2016 was his freshman year there, and he had a great year with 9.5 tackles for a loss and 8.5 sacks. The next two years he played in 13 and 12 games, respectively, and averaged 50 tackles (14.5 for a loss) and 7.25 sacks (statistics courtesy of Sports Reference). He declared for the 2019 NFL Draft after his Junior year and had a heck of a combine. He showed great speed, burst, flexibility and agility for a man his size (6’5” and about 250 pounds). He skyrocketed up draft boards with his showing and ultimately was taken by the Carolina Panthers with the #16 overall pick.

Brian Burns had a nice rookie season, starting five of the 16 games he played in, with totals of 25 tackles (five for a loss), 7.5 sacks, one forced fumble and one fumble recovery. He played mainly as a pass rusher which is clearly where he excels.

The Carolina Panthers bolstered their defense even more during the 2020 NFL Draft when they took defensive players with all seven of their selections, including three picks to bolster their defensive line: Derrick Brown (#7), Yetur Gross-Matos (#38) and Bravvion Roy (#184). Along with adding a lot of defensive talent, the Panthers will be changing to a 4-3 defense as their regular defensive arrangement. This will move Burns from more of the outside linebacker role he played in his rookie year to the defensive end role he played during college.

Burns is likely to build on his nice rookie season, as he should be a starter at defensive end for the Panthers in 2020. He was the #54 scoring defensive lineman with 73.50 points (using our RotoHeat IDP Scoring), and a full year starting should help him destroy that in 2020. He does need to improve as a run defender, as he does not have the level of strength you would prefer from a 4-3 defensive end. If he can improve on that and increase his tackle numbers, then he has DE2 upside this year. If he maintains as more of a pure pass rusher, then you are looking at closer to DE3 level numbers.

Brian Burns’ development as a run defender will be key to his long term value. He has shown enough in college and his first year in the NFL that we know he will be able to get to the quarterback. If you play in a big play league instead of tackle heavy or balanced, Burns will probably have higher value even if he doesn’t improve his run defense. I am not expecting a regular DE1 performance from him, but he does have that upside. He would only have to increase his production from last year by slightly over 1/3 to get into the back-end DE2 conversation, but he would need to increase it by closer to 2/3 in 12 team leagues. Overall, long-term I see a DE2 with DE1 potential

Looking at what owners had to spend to get Burns last year (likely a third or fourth round pick if not later due to his linebacker designation), they are probably not going to sell for less than a second. If he is still designated as a linebacker in your league, you may be able to get him for a third still.

High end defensive end production is harder to get than at linebacker, so the positional switch should help his value go up. I would be comfortable sending a late second round pick to get him, but wouldn’t go higher than that at the moment. There is a lot of young defensive line talent out there, and while I like Burns and his long term potential, he has not shown enough yet to trade away a high pick for him.

Let us know what you think about Brian Burns; he is the #40 IDP and #22 defensive end we have ranked within our free IDP rankings. You can catch our IDP-Specific Live Stream Monday Nights @9:30 Eastern over on YouTube! You can also find me on Twitter!