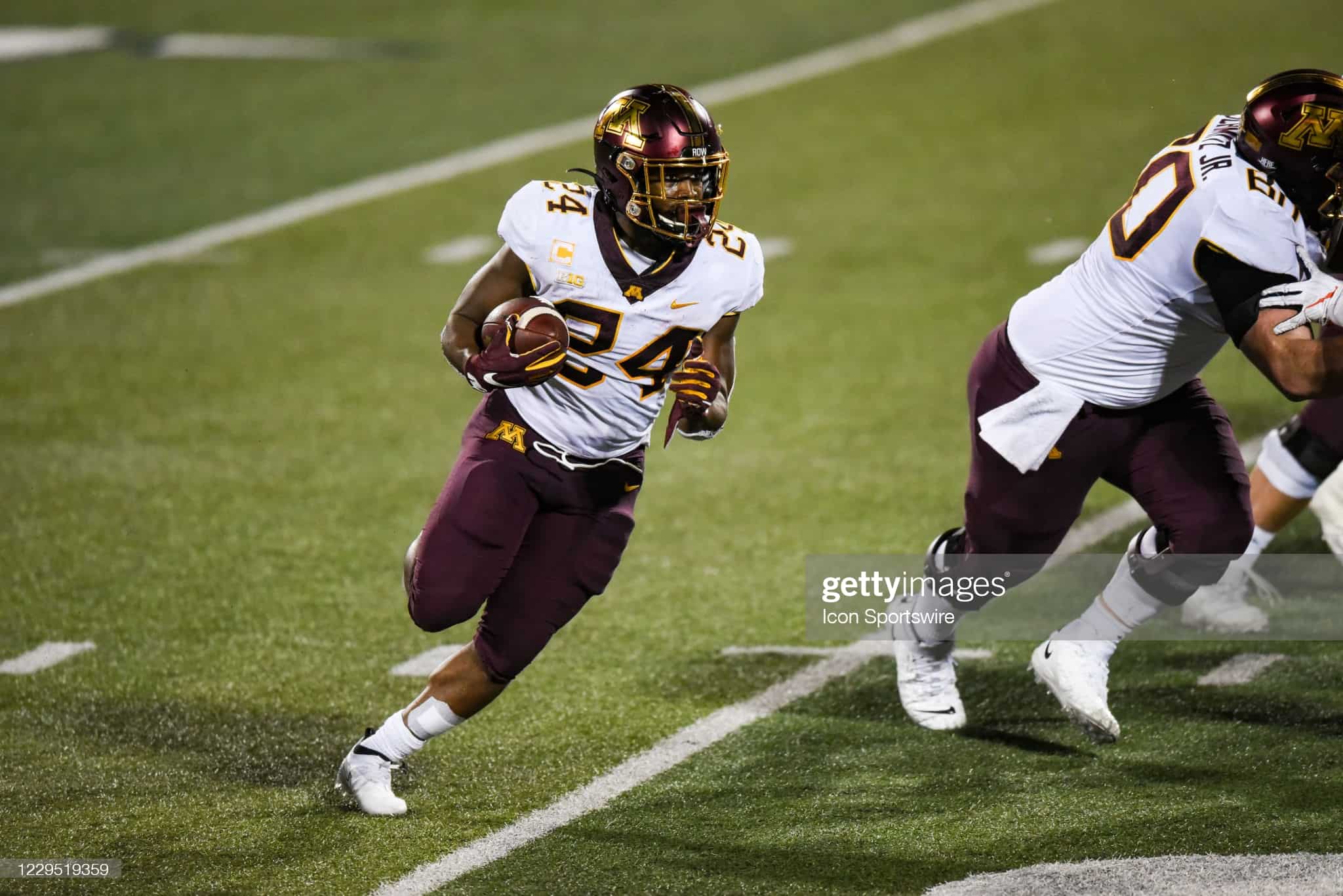 As college training camps are opening up, I wanted to give you a list of guys to watch this fall! I want to look at the Big-10 running backs, and you’ll be surprised that there are plenty of players that can make a fantasy impact in this conference. Remember, the Big Ten’s made up of Illinois, Indiana, Iowa, Maryland, Michigan, Michigan State, Minnesota, Nebraska, Northwestern, Ohio State, Penn State, Purdue, Rutgers & Wisconsin.

As we get closer to the season, I wanted to share where I see these teams ranking in the conference in terms of which team’s running game is the strongest and which one is, well, Rutgers.

Ok, so some of you saw that ranking list and scoffed, which is fine. If you told me at the end of the year that I was crazy and this list is all out of whack, I get it but that’s where I’m at today! Mohamed Ibrahim comes back as the highest graded back when you look at PFF, and it was for good reason. Minnesota is clearly ready to bounce back after a shaky 2020 when we saw a passing game that looked to have taken a step back but has a ton of talent across the board. When this kid gets over 200 touches you’ll see him with 1,000 yards, and he has a nose for the endzone getting 15 touchdowns last year, even though teams knew they were going to run the ball.

Ohio State returns Master Teague, whom really is just keeping Trayveon Henderson’s seat warm in my mind, as Henderson looks the part of the next big running back in the OSU tree of talented backs. Teague graded out as the 145th rated back in 2020, with a grade of 73.0 on PFF, but injuries have always been Teague’s issue. When he’s on the field, he’s more than capable of being a team’s top option in the run game.

The question for Penn State is who’s going to get the majority of the rushing attempts? I’m reading that Noah Cain looks solid in his attempt to comeback from an early season injury and Kayvone Lee was solid, getting almost 5 yards per carry on 89 attempts in 2020. Ideally, the Nittany Lions would prefer Cain be their top back, but you can make a case that they split carries pretty evenly in 2021.

The next group of teams all have solid options in Tyler Goodson (Iowa), Chase Brown & Mike Epstein (Illinois) and Zander Horvath (Purdue). All of these backa turned in solid grades from PFF last year, and these are teams that should lean heavily on the run to setup the pass, minus Purdue who could be the most balanced offense of the three teams listed.

After those running backs, it’s a bit of an unknown because you have two USC transfers in the B1G in Markese Stepp (Nebraska) and Stephen Carr (Indiana) as well as a ton of questions. Both were talented backs but just couldn’t put it together at USC and lost their jobs out West. Now in the Big Ten they could revitalize their college careers with the hopes of being late round fliers in the NFL Draft.

Tayon Fleet-Davis (Maryland) looks to take over for now Rams’ running back Jake Funk but they are not really the same style of back, so I have him a little lower until I see what this offense does with him, Cam Porter of Northwestern graded out fairly well at 70.7, but he only had 81 carries, so I’d like to reserve judgement until I see him more on the field. If freshman Donovan Edwards takes the starting job from Hassan Haskins, I’d feel better about having Michigan higher because they will need to lean on the rushing attack to setup the pass in 2021.

Jalen Berger (Wisconsin), Kenneth Walker III (Michigan State) and Isaih Pacheco are really dart throws unless something changes, as their teams are in transition and are probably a few recruiting cycles away from relevancy in my mind.

Thanks for stopping by, and I want to hear from you! Jump over to RotoHeat’s Discord or Facebook Group to keep the conversation going. Make sure to keep a lookout on YouTube and RotoHeat.com for more great fantasy football content. If you want to support what we’re doing in the fantasy football world, show some love over at Patreon.com/RotoHeat, and you’ll see a ton of premium content before the rest of the world!