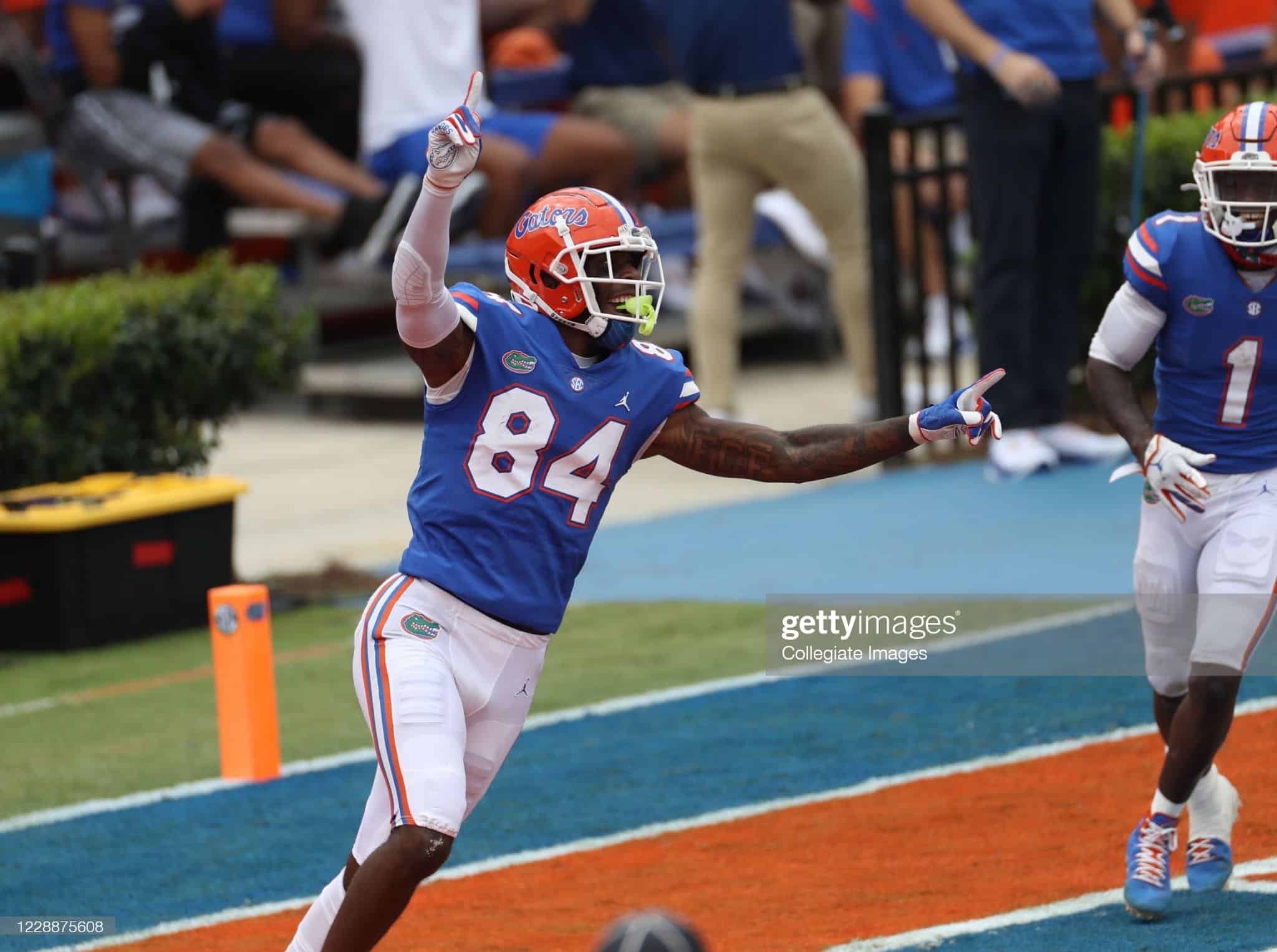 2021 Rookie Draft – Draft for Talent, Not Need or Landing Spot

Scouting season is in full swing when it comes to the incoming rookie class of 2021. That also means that draft season is fast approaching, with the NFL Draft itself being less than 4 weeks away. That means you need to start preparing for your drafts, and if you haven’t already, we have a lot of content here on RotoHeat that will help you get prepared as well as our RookieDraftGuide.

Now, knowing the prospect profiles and having your rankings for the rookies means you are quite a long way in your preparation, but that is not all.You also need to understand the strategy that goes into the rookie draft in your dynasty leagues as well as possibly having knowledge on where others in your drafts rank or value the various incoming rookies. Here are the approaches I believe are the best when it comes to drafting rookies in dynasty.

One of the things I feel like I have heard the most when it comes to rookie drafts is “I just need to draft a RB at 1.0x, then I’ll be able to contend for the “ship” this year. Often, this is something I hear people with a pick in the 1.05-1.10 range say, so people who are borderline contenders but probably will not actually be able to win their league, if we are being honest.

Now, if you have played fantasy football for long enough, you have most certainly heard the quote “Draft for talent, trade for positions of need” before. When I began playing dynasty, I sort of scoffed at this notion. But now, it is the truth I live by.

As is the case with any draft, one should never enter the draft with a specific player or position in mind for a specific draft pick that they have. One of the mantras in fantasy football is “always stay fluid” when it comes to your drafts.

Instead of pigeon-holing yourself into a specific player or position, you should get whoever is the best player on your board. This is even more true in a rookie draft where you just want to improve your team.

When you draft for talent, your chance of becoming a better team is higher than when you are drafting for need or drafting a player who ended up in what is perceived to be a good landing spot. We have seen several examples of this in fantasy football over the past few seasons.

Let us dive into some of these examples:

Draft for Talent Over Landing Spot or Situation.

When you look at rankings, be it for redraft leagues, superflex dynasty leagues, or any type of rookie draft, chances are that positional value is already baked into the rankings because some positions are just scarcer than others, or have lesser value (QBs in 1QB leagues or TE in general outside of the top 3).

That means when you are looking at your rookie draft rankings that you basically have the order in which you personally, or whoever made the ranking, thinks that every player should be drafted in.

Now sometimes a player gets drafted in the NFL draft in what the fantasy community perceives to be a particularly good landing spot. Think Clyde Edwards-Helaire last season.

Before the 2020 draft, Jonathan Taylor and D’Andre Swift were largely the two RBs duking it out for the 1.01 in 1QB leagues. Pre-draft rankings are usually concerned with talent and skills. But with the draft, Clyde Edwards-Helaire, who many had as their RB5 (talent and skillwise) going into the draft, catapulted to the top of people’s rankings because of landing spot. I was also “fooled” by this myself.

If you look at Dynasty rankings now, CEH is hard-pressed to be higher than the fifth, or even sixth (if you like Antonio Gibson) RB from the 2020 class off the board in dynasty start-ups.

This tells me that we were probably wrong in our process when we vaulted CEH up our draft boards, because although the landing spot was great on paper, the talent probably was less than the other rookies RBs in that class who are now all looking to be in similarly great or better situations.

If you had drafted talent over CEH at the 1.01 or 1.02, you would probably have had Jonathan Taylor now, but even having Dobbins, Akers or Swift seems like the better choice.

Some people might have had CEH over some of the other RBs in the 2020 class, but chances are that whatever rankings you looked at before the draft didn’t have him at RB1 for the class. Being picked at the end of round one (giving him great draft capital, which I do believe in) by the Chiefs (giving him a great perceived landing spot) leapfrogged CEH ahead of the other RBs in rookie drafts.

If you look at dynasty startups right now, CEH is the last of the Top 5 2020 rookie RBs to go off the board.

But why is it that we should not put nearly as much stock into landing spot and situation, you ask?

It might sound obvious, but it seems to be something that people quite frequently forget. Landing spot and situation is fluid. It can change from one second to the other. In Dynasty, it is not about the here and now, right in this moment or this season, like redraft is. Looking at Clyde Edwards-Helaire, his value decreased the second that the Chiefs brough in Le’Veon Bell. We could not have foreseen that. But if you went for the talent of Taylor, Swift, Akers or Dobbins, over CEH, you are probably in a better spot today than you would have been had you taken CEH.

On the surface, CEH looked to have the best situation, but now, several of the 2020 rookie RBs are in better situations, and thus have more value.

And that is why you go for the player you believe to be more talented. In the end, talent will win out, and the more talent a player has, the higher are the chances that that player gets on the field and produces.

Fantasy football analysts can be wrong on talent, but if you draft the player you believe to be more talented and you miss, that ultimately comes down to you being wrong. Even in bad landing spots or situations where there’s competition for playing time, talent will rise to the top and perform. Just look at AJ Brown, Justin Herbert (2nd string QB to start the season), Tee Higgins (predicted to be WR3 or 4 on the Bengals, behind Boyd, Green, Ross/Tate). Even Justin Jefferson’s landing spot was believed to not be great for his fantasy value because it was a run heavy offense and Adam Thielen was the #1.

The point is: If you bank on talent, you will rarely miss completely, it might just take a little bit of time to come to fruition. If you bank on landing spot/situation, you could have wasted your pick entirely.

Draft for Talent Over Positional Need

With understanding why you should draft talent over landing spot out of the way, we turn our attention to drafting talent over need. Again, I will be drawing on an example from the 2020 rookie draft class, paired with a bit of logic in my reasoning. First, let us look at the basics of talent over need.

When we are talking about drafting for need, it practically comes down to filling holes in your roster through the rookie draft. On the surface, this looks like a great idea, right?

Well…Sometimes it is, because sometimes, the most talented player left on the board happens to be playing a position of need for your fantasy team. Then it is an absolute no-brainer to draft that player.

But other times you end up at 1.11 in a 1QB PPR draft with the choice of drafting Justin Jefferson, who is the most talented player left on the board, or KeShawn Vaughn, who you consider the RB6 in the 2020, not because of talent, but because he landed in what was perceived to be a great landing spot with Tampa Bay.

I am sure you can guess who I drafted in this situation?

That is right, I obviously drafted Justin Jefferson, who I believed was a superior talent to Vaughn. In other leagues, I know people who are not quite as fortunate, which meant I took advantage and got JJ at spots like 1.14 (14 man) or 2.03 (12 man).

I will go as far as saying that anyone picking Vaughn over players like Jefferson, Tee Higgins, Brandon Aiyuk, and almost any player that went in the 2nd round of fantasy rookie drafts in 2020, are kicking themselves because they drafted a position of need over talent.

Drafting “Best Player Available” over “Best Player at a Position of Need With Best Situation” is oftentimes going to get you a better hit rate. Sometimes it might work out for you, but that’s often more luck than anything. When you go BPA, chances are, you are improving your team overall more than you would if you draft a positional need.

What you need to do instead, is find other ways to shore up the holes in your lineup.

Trade for Positions of Need Instead

Instead of staring yourself blind on a given position that you need to fill out through the rookie draft, you should draft for talent and trade for need.

This might seem counterintuitive, because it can be difficult to find a suitable trade partner, and it might take a while to put together a trade, especially if you’re looking for one of the top players at their position.

However, as we have already established, drafting for talent is better than drafting for need or drafting a player who landed in what is perceived to be a good situation.

That is why you trade for positions of need, because at that point, you can trade for something “known” rather than drafting something “unknown” and needing that unknown to hit.

The “known” that you can trade for is a player who has already proven that they can produce. This is exactly what you need, because you know you can plug that player straight into your lineup.

This is why you draft for talent and drafting the best player available in your 2021 rookie drafts is going to give you the best shot at winning, not just in 2021, but also further down the line.

Getting the best available players, year after year, allows you to leverage the talent you have on your team to other talented players at positions of need, after you have seen that those players you want to acquire does in fact present an upgrade to your team.

So, when you are heading into your next rookie draft, I hope you will take this article into account and look to draft for talent rather than be locked into drafting a specific player or a specific position–because that is a losing proposition, especially when looking long-term.

Draft for talent and get the best players possible on your team. Do not overreact to landing spots or situations that look incredible to begin with. Draft the best players. Then trade from positions of strength to positions of need. That is how you secure long-term success in dynasty fantasy football.

If you like the content we provide here at RotoHeat, feel free to check out the RotoHeat Youtube channel, where we have a bunch of weekly livestreams and rookie bios, or one of our Facebook communities – The RotoHeat Dynasty community or the RotoHeat Redraft community, where you can ask any questions you’d like answered by the RotoHeat team and all the other members.