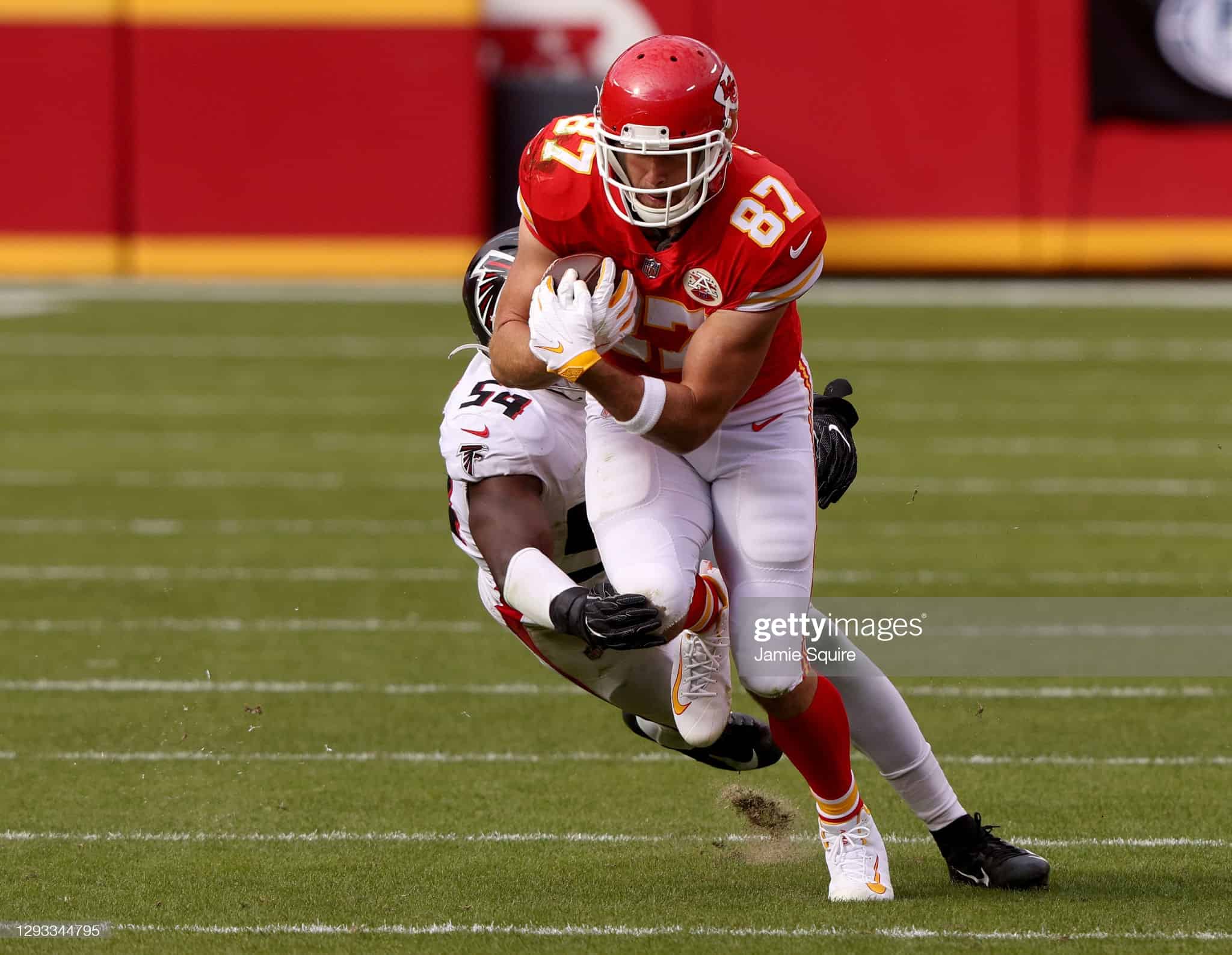 With the season being done, its time to take a look at NFL Playoff Fantasy Football.  I know that most of you likely do not participate in playoff fantasy football. The format is no where near as popular than the regular season long formats.

That is ok, as I have always said play whatever type of fantasy you prefer, there is no format that I am aware of that its worth playing.

There are numerous styles of playoff fantasy, and the format we in the 2020 ROTOHEAT NFL PLAYOFF LEAGUE is one player from each playoff roster.  When building your roster, you can NOT choose more than 1 player from any single team.

The league plays with PPR scoring as all RotoHeat leagues do, and each roster will consist of 3QB, 4RB, 4WR, 3TE

The players you select will be used for the entirety of the NFL playoffs. When a player’s team loses, you no longer accrue points for that player. During the Super Bowl, all teams will only have two players still playing.

There is still time to enter our league, entry is $25, and the league is run by RotoHeat founder Rick Butts and the league fees are held over on Leaguesafe.com. Head on over to our Facebook page for information.

I thought I would bring you this bonus episode to discuss playoff roster construction.  There is a method to the madness, simply put there are 6 games this weekend and you will lose 6 of your players and carry 6 more into the next round.

These type of playoff leagues are typically determined in the first week.  Successfully predicting the winners on Wildcard Weekend.  The reason for this in my opinion is that you need to get the most out of the 6 teams in which your roster will drop after this weekend.

Because the NFL re-seeds after each round this is the lone week that we can set our lineups based off of matchups.  I’ll review each matchup and give you my thoughts on which player or players I like off each roster .

I like the Bills to win this game, I could see the Colts covering the spread and I like the over.  Since I have the Bills winning, I need to hit on the Colt I select.  I don’t see any scenario in which I do not grab Jonathan Taylor.

Taylor finished the season strong and he is likely the leading fantasy scored in this one off Indy.  QB Philip Rivers is not going to throw much, his WRs are hard to trust and the TE are not on the fnatasy radar.  Taylor is the one for me rather easily.

When it comes to the Bills you have a decision to make. Are you targeting QB Josh Allen or WR Stefon Diggs?  You have 3 QB slots on your roster, and 4WR slots.  I won’t question anyone who takes either of these two players, but for me its Josh Allen.

I see the Bills in the Conference Championship and its going to be Allen that gets you there.  Diggs although a great choice won’t score the points Allen does IMO.

Allen will be one of my 3 QBs and I will leverage the depth at WR to fill my roster.

I hate this game to be perfectly honest. It seems to matchup two teams going nowhere.  The Rams are beat up, and the Seahawks have been extremely ordinary on offense for weeks.

Who do you grab off of the Rams who I expect to lose this game?  Normally I would look at Jared Goff, Cam Akers, or Robert Woods or Cooper Kupp.  For me it has to be one of Woods or Kupp.

Goff likely doesn’t play and Akers is not 100% so those two are eliminated. I don’t trust Rams backup QB John Walford, certainly not to be one of the remaining 2 QBs on my roster.

Seattle was terrible against the WR all season and as a result that is where I go.  Kupp seems to be the choice as I believe he sees the most targets.  Kupp who was activated off the COVID-19 IR this week in tow games versus Seattle had 12 receptions for 116 yards.

On Seattle I look at this matchup and think DK Metcalf gets shut down by Jalen Ramsey, Russell Wilson has struggled of late, Chris Carson is in tough this week, and Tyler Lockett is wildly inconsistent.

In the end I’m rolling with Metcalf, I expect the Seahawks to win this game and potentially reach the Conference Championship game.  Metcalf wont win you this league during the Wildcard Week, but his the upside going forward can not be ignored.

Simply put Tampa should win this game.  When looking at their roster and the roster I need to build I am rolling with Rob Gronkowski.  He won’t do a lot in terms of volume, but he is a decent bet to score and this format requires 3 TEs.

You could also consider one of the WRs here.  Antonio Brown has come on as of late as has Chris Godwin.  Mike Evans is risky considering his knee injury in Week 17.  The passing game and the WRs has been solid of late but the last three teams the Bucs have faced have been Minnesota, Atlanta, and Detroit, a trifecta of mediocrity.  I don’t trust the running game so Rojo and Fournette are out and Brady isn’t a worth add here either.

Washington comes down to three players for me, RB Antonio Gibson, WR Terry McLaurin and TE Logan Thomas.  Gibson isn’t 100% and faces a top run defense in Tampa, McLaurin is a solid pick that I can get behind, but I am rolling with Logan Thomas.  Same as Gronk I like his chances to score and unlike Gronk I think he sees plenty of targets.

I like the Titans to upset the Ravens in this one the same way they beat them in the playoffs a year ago.  I expect Derrick Henry to run all over them.  Regardless if you think the Titans win or lose I don’t see how you roll with anyone other than Henry, unless you like the contrarian play here, and in that case I would go with A.J. Brown.

On Baltimore there are three viable options here, Lamar Jackson, J.K. Dobbins, and Mark Andrews.  I am rolling with Lamar Jackson.  He will lead the team in fantasy points and even though I see them losing I want the potential Jackson provides.  If I am wrong and Jackson and the Ravens win on Sunday, I am happy to carry Jackson on my roster into week 2. I did consider Mark Andrews here but went with Lamar due to his upside and the fact I like two other TEs more.

The Bears will cover and could potentially pull the upset.  I am not confident enough that they do however, but I see this one being close. There are two options here, David Montgomery and Allen Robinson.  Matchup decides this for me.  The Saints are legit versus the run so I will be adding Allen Robinson to my roster with little hesitation.

There are three solid choices for the Saints and perhaps a fourth.  The three are obvious, Drew Brees, Alvin Kamara, and Michael Thomas.  If your roster construction needs a TE you could consider Jared Cook, but I will not.

Brees is still dealing with 11 broken ribs, and the bears pass rush could put him back on the shelf.  Michael Thomas is coming back from IR and I am not sure how healthy his ankle is.  That leaves me with my choice and its Alvin Kamara.  I believe he’s the best option here.

There is a chance Kamara doesn’t play this week, but I am betting he does.  I am not taking a zero off of the Saints so if Kamara can’t clear COVID-IR, I will put Thomas in at WR and swap out Allen Robinson for David Montgomery.

The Browns are without head coach Kevin Stefanski and have also placed G Joel Bitonio and WR KhaDarel Hodge on the Reserve/COVID-19 list. Joel Bitonio is a Pro-Bowl caliber guard, so his loss is significant.  I think Pittsburgh finds a way to win this football game.  I see the Browns trying to control the time of possession and as a result I will roll with Nick Chubb.  Kareem Hunt and Jarvis Landry are also options but in the end its Chubb and my projected workload for him that puts him over.

Pittsburgh came down to process of elimination for me as the only spot I have available for them is at WR.  This works as the run game is a mess and Ben Roethlisberger has not looked like a QB I want to roster of late.  Eric Ebron would have been a desperation add.  So, its going to be Juju Smith-Schuster, Diontae Johnson or Chase Claypool.  I selected Johnson.  I believe he sees the bulk of the targets as long as Pittsburgh remains active in these playoffs and the best chance to score as well.

The Packers present four viable options.  Aaron Jones, Devontae Adams, Robert Tonyan, and MVP QB Aaron Rodgers.  I can not pass up on Aaron Rodgers here.  Adams is tough to leave on the sidelines.  Jones and Tonyan are absolutely viable fantasy options, but in the end Rodgers is the straw that stirs the drink in GB, and I see Rodgers taking this team to the Super Bowl this season.

Selecting a player off the Chiefs is like visiting a buffet table, everything looks good and you want it all.  Patrick Mahomes, Tyreek Hill, and Travis Kelce lead the way, and some may feel Clyde Edwards-Helaire is an option.

It is really hard to leave Mahomes, and Hill off my roster, but that is exactly what I am doing by selecting Travis Kelce. If Travis Kelce were a WR he would have finished at WR4 with his 312.80 regular season points.  One of the WRs that he would trail is Tyreek Hill who posted 328.9 PPR points this season.  Mahomes is Mahomes and you always want him on your roster, but in the end the positional advantage that Kelce carries with him can’t be ignored.

That’s going to do it for today’s episode, thank you for tuning in for my 2021 Playoff Fantasy Football Roster Construction episode.

I’ll be back with episode 122 as I get back into my 2020 Fantasy Awards series, with a review of the Running Back position. Stay safe and healthy Heat Seekers take care.