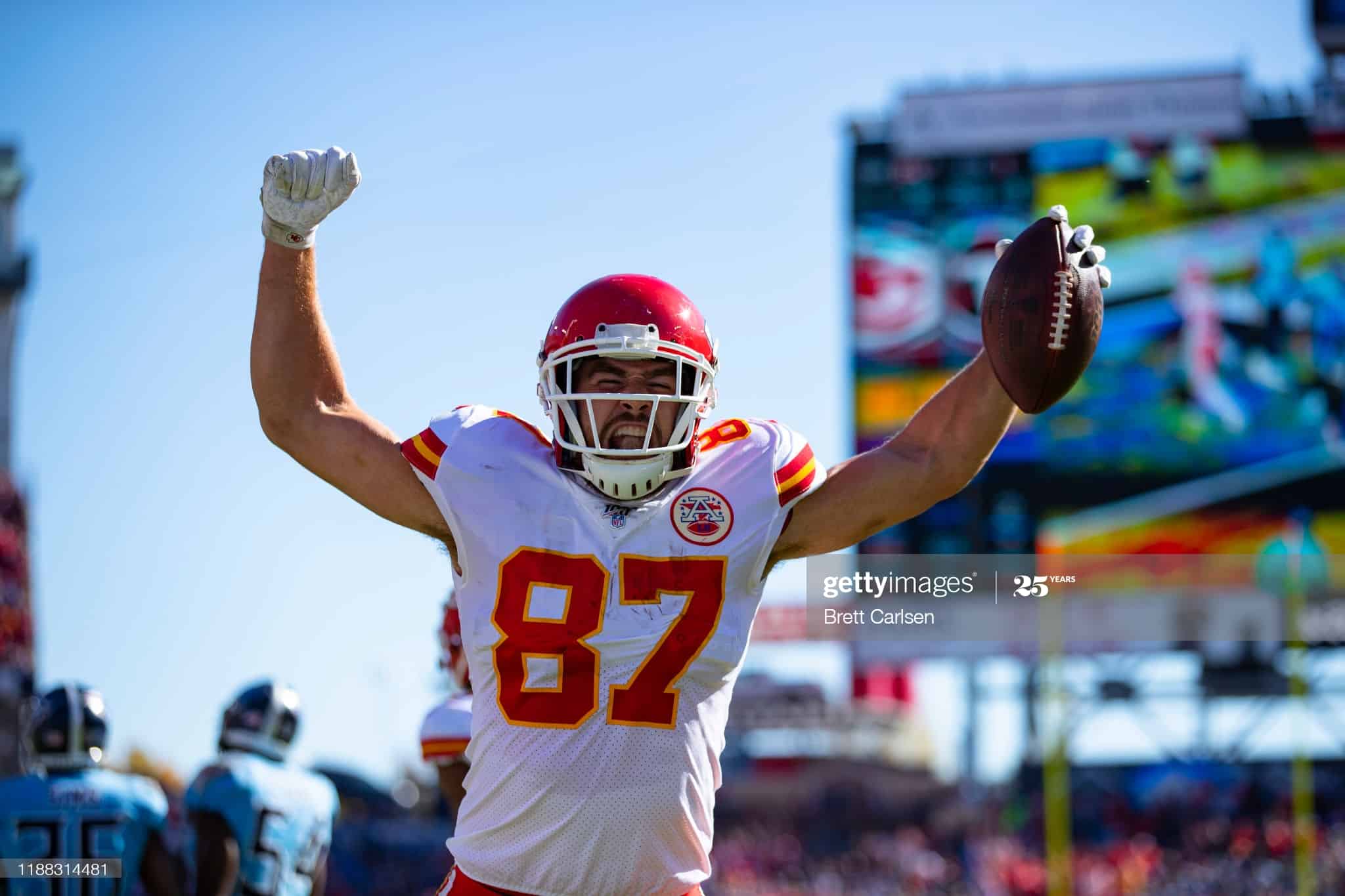 Of all the positions to rank, tight end is really a top-6 and then a large group full of players that have the ability to populate the remaining four spots. Each and every season the tight end landscape appears to be deeper and more talented than the year prior. The reality is, it’s not, and over the past eleven seasons the position typically disappoints.

While everyone would prefer to roster the elite fantasy football tight end, it’s important to know that you don’t have to. The tight end position is extremely top heavy. There is the big three atop the ADP, a middle three, and the rest of the field. Almost every season in recent memory a TE or two from the “rest” had finished as a top-12 fantasy tight end.

My advice, draft “great” early or simply wait and draft your TE late. Here are my 2021 Fantasy Top-10 TE Rankings

Since the start of the 2016 season, Travis Kelce has finished as the TE1 every year, averaging 263.6 points a season. Since Patrick Mahomes became his quarterback in 2018, Kelce has totaled 431 targets, 305 receptions, 3,981 yards and he has scored 26 touchdowns.

His best season came in 2020. Kelce saw a league high number of targets for a TE with 145 (tied with Darren Waller). He turned those targets into 105 receptions, 1,416 yards (NFL TE record) and 11 touchdowns. Kelce ranked 6th in targets, 5th in receptions, 2nd in yards and 5th in touchdowns among all pass catchers in 2020. No need to overthink this: Travis Kelce is firmly in the top spot of my 2021 Fantasy Top-10 TE Rankings.

Last season, I had Darren Waller pegged for regression and I wasn’t wrong, except it was positive regression–not exactly what I had in mind. Waller saw 145 targets in 2020 and he snagged 107 of those targets for 1,196 yards and scored 9 touchdowns. Waller finished as the TE2 with 278.6 PPR points. In two short seasons, Waller has gone from being a player most people hadn’t heard of to becoming a fixture in the top-3 at his position.

Most likely, very few, if any, doubt that Darren Waller is a top-three fantasy tight end. The question is when to draft him and whether or not to do so over George Kittle. Waller’s been healthier and is in line to retain his heavy target volume. It will likely require a mid-round two selection to roster him. Waller, in my opinion, is the safer pick in PPR because of those targets.

George Kittle is a beast, and there really isn’t a better term that comes to mind when describing him. He loves to hit and loves to be hit. Kittle is the best pure TE that we have in the game today. He blocks like no other and sheds tackles like no other. Over the past three seasons, George Kittle has 1,791 yards after the catch in 38 games while Travis Kelce in 47 games has 1,551.

Kittle missed half the season in 2020, but in the games he did play, he was good for 14.9 PPR points per game, third-best among tight ends. Darren Waller might be the safer pick based on availability and target volume, but both are in the mid-round 2 conversation, and both join Travis Kelce as the “Big-Three” at TE.

After breaking out in 2020, T.J. Hockenson should be drafted as a top-five tight end. His upside is to finish even higher.

Hockenson has a huge target opportunity with Kenny Golladay, Marvin Jones, and Danny Amendola all leaving Detroit. With all due respect to Breshad Perriman and Tyrell Williams, T.J. is the most talented pass catcher on the Lions’ roster. We have seen new Lions QB Jared Goff heavily target the TE position in the past–most notably the five game stretch in 2019 in which Tyler Higbee was targeted 56 times. Goff will be forced to lean on Hockenson, and as a result I have him ranked 4th in my 2021 Fantasy Top 10 TE Rankings

I have been a Kyle Pitts truther since January when I slid him into the top spot of my dynasty 1QB rookie rankings. I remain high on Pitts, but in redraft there is some risk. Since 2010, there have been nine tight ends drafted in the first round, and collectively they have averaged 96.8 PPR points and a TE26 finish.

With Julio Jones off to Tennessee, I see Kyle Pitts as the No.2 option in the Atlanta offense. The No.2 option in Atlanta with 9 games of Julio last season posted 109 targets, 72 receptions, 768 yards and 4 touchdowns. That stat line belongs to Russell Gage who’s 181.1 PPR points led to a WR37 finish. 181.1 points was good enough for a TE3 finish in 2020. Kyle Pitts might not be the TE I think he is, but I do see him being as good as Gage in his rookie season, and worthy of No.5 in my 2021 Fantasy Top 10 TE Rankings.

Mark Andrews regressed off his stellar 2020, scoring 37.1 PPR points less than he did in 2019. Despite missing two weeks on the COVID-19 list, Andrews tied Marquise Brown for the team lead in receptions and was the only Raven besides Brown with more than 50 targets.

Andrews not only dominates targets in Baltimore, but he’s been very efficient. His 8.9 yards per target ranks fifth amongst tight ends since he entered the league, and his 8.5% touchdown rate trails only Jared Cook. The arrival of Rashad Bateman, Sammy Watkins, and Tylan Wallace creates the potential for a reduction in targets, but when push comes to shove, it’s Andrews that QB Lamar Jackson likely looks for. Andrews is a mid-round TE that is worthy of his ADP.

Dallas Goedert is expected to be the primary pass catching tight end for the Philadelphia Eagles this season, and in that role Goedert has top-5 TE upside.

Philadelphia doesn’t have the deepest wide receiver depth chart, and as a result it wouldn’t be a stunner if Goedert finishes as the second most targeted member of the offense behind DeVonta Smith. Zach Ertz was expected to be off the roster, but he remains, which could limit Goedert’s upside especially in the red zone. Goedert was a top-10 PPR tight end in 2019 with Ertz on the roster, and I expect Dallas Goedert to repeat that performance in 2021.

Coming in at No.8 in my 2021 Fantasy Top 10 TE Rankings is Denver Broncos’ TE Noah Fant. Fant finished as TE9 last season with very questionable quarterback play, which likely played a role in his inconsistent output. Fant scored 33 PPR points in his first two games of 2020, but averaged 7.5 PPR points the rest of the way with only three games with 10+ points.

I am higher than most on Denver QB Drew Lock, but Lock has limitations, as does Denver’s other QB, Teddy Bridgewater. Fant needs more touchdowns to take the next step as a fantasy TE. He has only three in each of his first two seasons. He is going to need more targets in the red zone and end zone to increase that touchdown total. Fant had just four in 2020 and six in 2019–6.3% of his career targets.

Two transactions this off-season directly benefit Tyler Higbee. The Rams trading for Matthew Stafford and the Seattle Seahawks signing Gerald Everett. Everett’s departure means Higbee is in prime position to play every down, and Matthew Stafford’s arrival likely leads to better throws than in the past.

The last time we saw Tyler Higbee on the field without Gerald Everett was in the later portion of the 2019 season. All Higbee did in those games was average 11 targets, 8.6 receptions, 104 yards and .4 touchdowns a game. He was TE1 overall in those five weeks and out scored both Travis Kelce and George Kittle by over 23 PPR points. Expecting Higbee to score at that pace is unrealistic, but he does have top-6 TE upside in this Rams offense. His ADP is TE16 133 overall. Tyler Higbee is a late-round TE you can draft with confidence.

Adam Trautman has breakout potential in a Saints offense in need of targets with Michael Thomas potentially missing half the 2021 season. New Orleans has frequently prioritized tight ends as scoring threats in their offense in the past, but they haven’t used them as high-volume targets.

Adam Trautman in 2021 should change that. Trautman is big, he’s tough to tackle, and is very athletic for his size. Trautman has the potential of a 100 target, 70 catch campaign with half a dozen touchdowns. He’s a late-round TE to target and quite possibly the late-round breakout TE of 2021.