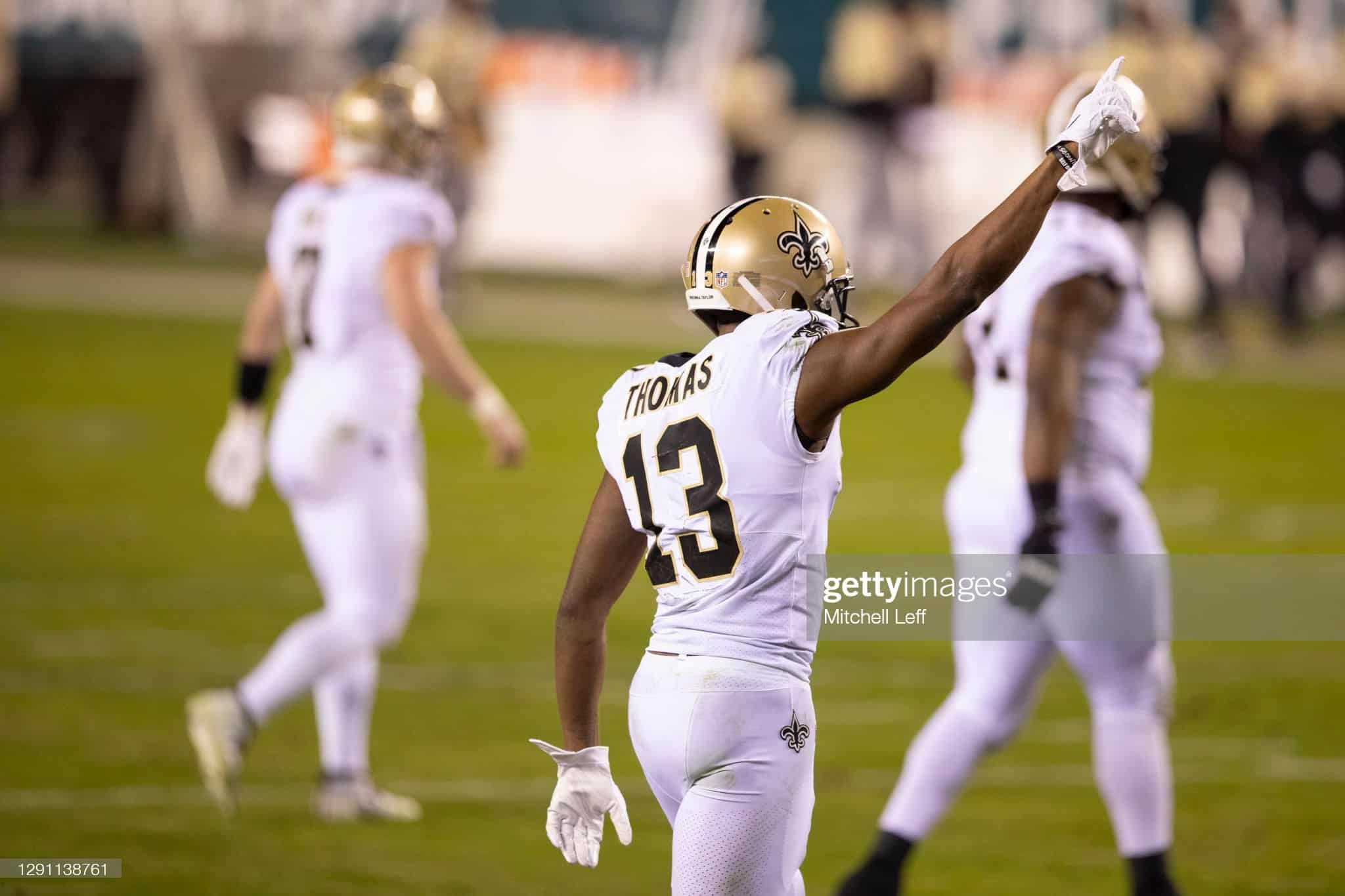 Dynasty managers crave WRs like Devonta Adams, AJ Brown, DK Metcalf, and Justin Jefferson on their dynasty rosters, and rightfully so. All of these elite WRs require a first or second round pick in a Superflex startup. If you draft like I do and you prefer to grab a QB in round one, and even in round two, you will need to find your wide receivers later in the draft. If you are looking for value, look no further than the following four based on their current ranking and ADP from our friends at DLF.

Michael Thomas entered the 2020 season with four consecutive top-12 fantasy seasons on his resume. During this four year run, MT averaged 301.08 PPR points per season. He is only one of three wide receivers since 2010 to record a top-12 season in his rookie year, joining Odell Beckham Jr., and Justin Jefferson. There were 336 wide receivers drafted between 2010 and 2020. Prior to 2020, Thomas was the only WR to have recorded a top-12 season in every season in which he has played.

In 2020 the streak of consecutive top-12 seasons came to an end. Thomas finished as WR95 with 83.9 PPR points. Thomas’ season was limited to seven games due to injury and a one game team suspension.

One of the main concerns around the fantasy community in terms of Thomas’ fantasy future is the retirement of quarterback Drew Brees. Thomas has played nine-games without QB Drew Brees in his career.–five of those games with Teddy Bridgewater in 2019 and four games with Taysom Hill in 2020.

Due to the uncertainty at quarterback for the Saints, Thomas’ value is falling, and its seeing him fall into early fourth round in Superflex start-ups. MT in the fourth is excellent value for a player who has a ceiling that remains as one of the top fantasy wide-outs. Without Brees, Thomas has proven he can continue to post similar production to his first four NFL seasons and help lead his fantasy managers to regular season and post-season success.

Mike Evans entered the NFL in 2014 when the Tampa Bay Buccanners selected him 7th overall out of Texas A&M. The 2014 WR class may go down as one of the greatest WR draft classes in recent memory. As we enter the 2021 season, Mike Evans is the best fantasy producer of the bunch.

Evans paired well with new QB Tom Brady. Many in the fantasy community speculated that Evans would struggle and that WR Chris Godwin would become the Bucs top WR. Godwin, after all plays in the slot, and the comparisons to Julian Edelman elevated Godwin’s value while suppressing the value of Mike Evans.

Evans saw his his lowest amount of targets in his career last season, and he still delivered a season that was great for his fantasy managers. At this point, most seasoned dynasty managers know what they are going to get when drafting Evans. He has one of the highest weekly scoring ceilings of any receiver, yet he boasts one of the lowest scoring floors as well. This high ceiling, low floor is baked into his current ADP.

Sure there are games where he seems to disappear, and it is due to multiple factors. Opposing defenses treat Evans like the No.1 WR, because he is the Bucs No.1 WR. If Evans is taken away, the Tampa Bay offense simply shifts to their other weapons, and there are a lot to choose from. WRs Chris Godwin, Antonio Brown, and to a much lesser extent Scotty Miller and Tyler Johnson. They also have three capable pass catching TEs on the roster

Tom Brady likes to spread the ball around, so it makes sense as to why Evans might disappear from time to time. Where Brady opted to target Evans with regularity in 2020 was the red zone. According to nflsavant.com, Evans was targeted 21 times in the red zone (11th best), and he turned those targets into 12 receptions and 9 touchdowns. Evans was a top-12 fantasy WR in 2020, and one should expect similar production in 2021. Drafting Evans in the back of the 5th round is excellent value.

Brandin Cooks is another member of the star-studded 2014 draft class. In his 7 seasons, Cooks has totaled 6,880 receiving yards and 40 touchdowns. He has recorded a 1,000+ yard receiving season in all but two of his seven seasons.

There are a lot of numbers one can look at when considering Brandin Cooks: his catches, his yardage, the four teams in seven seasons, but the number that most dynasty managers fixate upon is “five.” Cooks has had five documented concussions in his career, including the one that knocked him out of Super Bowl LII.

Cooks proved there’s still plenty left in the tank in 2020, and he bounced back to must-start fantasy status with the Texans. He finished as WR17 with 232 PPR points in 15 games played. He is still young, as he won’t turn 28 until after Week 1, and he’s been extremely productive whenever he has been healthy. The concussion history is a red-flag, no doubt, but if we stop drafting players with red-flags we are going to have some seriously small rosters.

Brandin Cooks is the primary target for the Houston Texans, a team that will be throwing a lot because they will have to. They have some uncertainty at quarterback, as it appears Deshaun Watson won’t be back. It’s likely going to be Tyrod Taylor to start the season and perhaps rookie Davis Mills to end it. Regardless, Cooks in the No.1 receiving option in an offense that likely throws 550+ times.

WR45 with an ADP that sees him selected in round eleven is far too low for a receiver with a top-12 and four top-24 seasons on his resume.

Josh Reynolds entered the NFL in 2017 after being selected by the Los Angeles Rams in the fourth round with pick 117. In his four seasons as a Ram, Reynolds appeared in all 64 games, starting in 24 of them. He totaled 113 catches for 1,450 yards and he scored 9 touchdowns.

In his career, Josh Reynolds has fantasy finishes of WR130, 74, 97, and 62. On the surface, WR79 and an ADP of 218 seems generous. It’s when you peel back the layers of the Josh Reynolds’ career that value starts to shine through.

In Tennessee, Reynolds has something all wide receivers crave, and that is opportunity. Corey Davis, Jonnu Smith, and Adam Humphries are all gone from a season ago. With that trio leaving town, 192 targets leave with them. Josh Reynolds joins WR AJ Brown as the only real viable pass catching options for Ryan Tannehill. TE Anthony Firkser and rookie WR Dez Fitzpatrick will also be in the mix.

I’m not looking for Reynolds to become a weekly starting WR, but in the situation he is currently in, that is his ceiling. 5-6 targets 3-4 catches for 40-50 yards a week should be in reach. Throw in 5 touchdowns and Reynolds gives you a potential WR3 floor. Grabbing him as the WR79 in round 18 is a value add in your Superflex start-up.