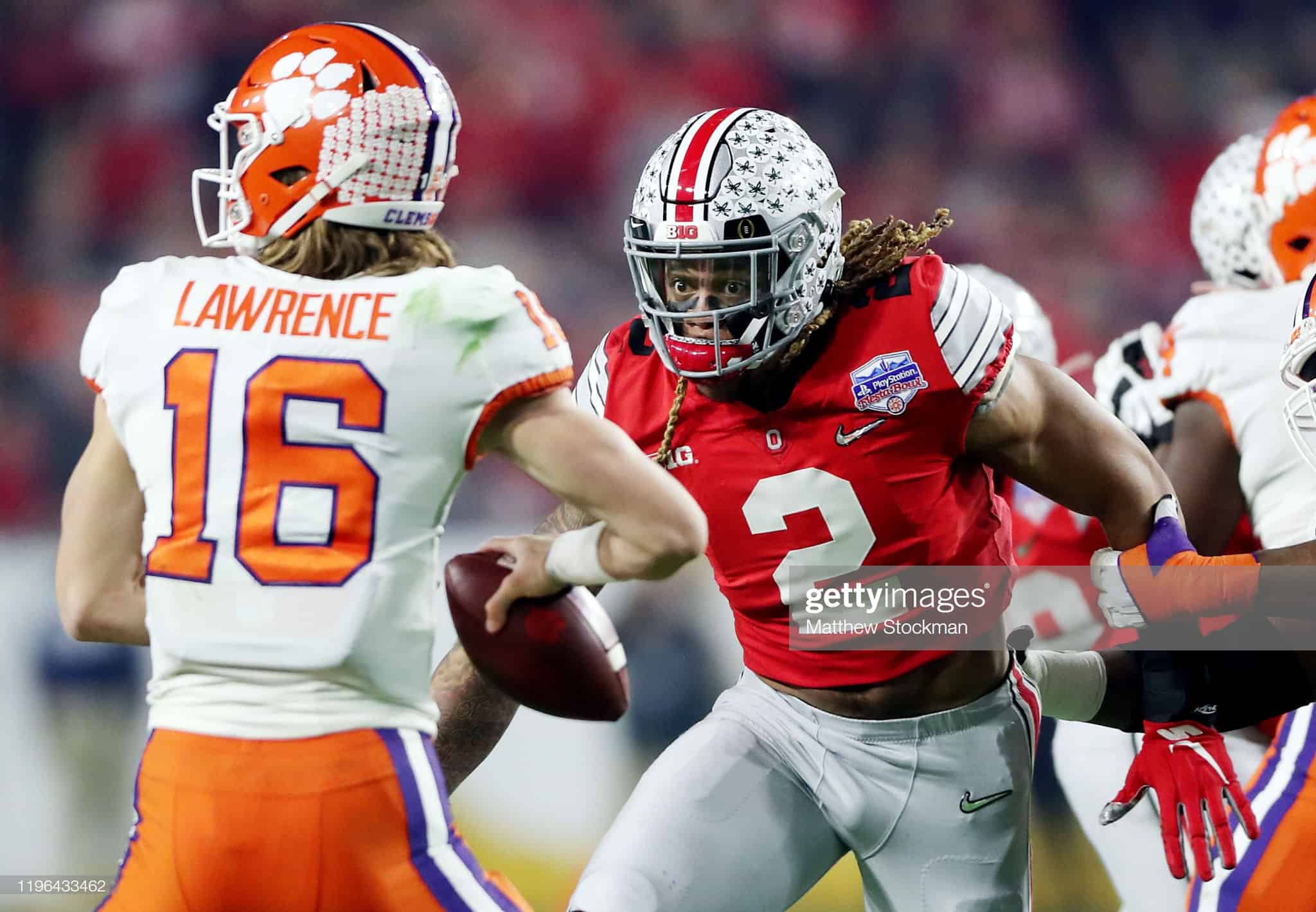 Round 1 of the 2020 NFL Draft is in the books and WOW, trades, surprises and so much more happened Thursday night! I want to look at the IDP ramifications of the first round of the draft, as there were some surprises that could affect your rookie drafts coming up.

This pick fell as expected, and arguably the best football player in the draft fell to Ron Rivera and the Redskins. Boy this should be fun! Rivera builds good defenses, and with the line they had already with Daron Payne, Jonathan Allen, Montez Sweat and Ryan Kerrigan, this team will get after opposing quarterbacks early and often this year. You may see Young in a similar situation to Josh Allen from last year, where the Jaguars had him play about 60% of the snaps with a veteran line around him, but this still is easily the top IDP rookie in this year’s class.

Picks 2 and 3 fell as expected, with Okudah going to Detroit and bolstering a weak Lions cornerback group. Before Okudah, the Lions only had Desmond Trufant and slot corner Justin Coleman that can start. I’d expect teams to pick on Okudah this season until they see what Okudah can do at the NFL level. That attention could lead to plenty of tackles as a rookie, some pass break ups, and hopefully a few interceptions. In your IDP drafts he’s CB1, but CJ Henderson is right there with him. If you have Henderson before Okudah, I wouldn’t blame you.

Matt Rhule is building the right way–focusing on the trenches with his first professional draft pick. By all accounts, I expect Brown to be the day one starter at the nose tackle position in Rhule’s 3-4 defense. From a fantasy perspective, I don’t think he’s DT1, but probably more like 3 or 4 depending on how the rest of the draft rolls out, but Brown could develop into a startable DT if he plays like he did near the end of his college career.

The Cardinals now have the middle of their field covered, or the secondary, or well…whatever position they decide to put Simmons at in their defense. I don’t see Simmons as the top LB in the rookie class more so because fantasy league designation could hurt Simmons. If he’s listed as a linebacker, you can slot him in as #2 IDP pick, but if he’s anything else, I’d slide him down probably lower to #7-10 in the class.

He’s no Jalen Ramsey, but as the Jags rebuild that defense they have some really nice young players at each level, and CJ Henderson can arguably be one of the top corners off the board in rookie drafts. Henderson, like Okudah, should see plenty of starter reps as a rookie, but Henderson could be relied upon to be thrust into the top spot covering opponents best receivers which can be dangerous for the rookies development. Either Henderson will boom or he will bust if he struggles handling the tall task ahead of him. I like ability to play man coverage, but he needs to improve as a tackler. If he does that, he should be a nice CB of the future for your IDP roster.

They traded DeForest Buckner for a younger, less-expensive version and I’m perfectly fine with that. The 49ers needed the cap space, and don’t have a ton of holes to fill, so this pick was really nice. I’d slot him in as my favorite DT in the class and expect in 2 years to see very similar production to Buckner, who if you watched our top 10 IDP lineman show, is one of my favorite IDP players.

A corner was mocked to the Falcons a lot this offseason after the release of Desmond Trufant, but some feel the Falcons reached, especially if you look at the Draft Networks rankings. Terrell fits what Atlanta and Raheem Morris do on defense, as he’s really good at man coverage and is a good tackler as well, but for IDP rosters he’s just draftable but not my favorite corner in the class–more like #3-5 at the position. Expect him to be a starter early as Atlanta has little at the position before the pick, so he should see a ton of action and could produce earlier than most.

The Raiders grabbed a physical corner to pair with last years second round pick, Trayvon Mullen, and they are becoming a very physically intimidating secondary in Vegas. He will be a starter early as well, but with a young corner across from him, it’s anyone’s guess who will get the attention and how the Raiders deploy them against the opponents’ receivers. In my IDP rankings here on the site, he was not one of my top corners, and this pick doesn’t make me move him up my rankings at all. If you’re playing in a league that starts all the defensive positions, he’s definitely draftable, but I’m not expecting weekly starter production out of him yet.

I’d expect them to move him to defensive end if they trade disgruntled end, Yannick Ngakoue. At linebacker, he’s probably going to see limited snaps with Joe Schobert and Myles Jack already in place, and defenses spending plenty of times in nickel formations. Pre-draft we had him at #6 in our rankings. This move slides him down a little for me, especially with Brooks going to Seattle in the first round.

I love this pick for the Chargers, as they needed a stud in the middle of the defense. With the great defensive line they have, Murray should eat at linebacker, and I could see him getting some sacks, TFL’s and plenty of tackles even as a rookie. At #3 in our rankings, this move solidifies that and potentially moves him to #2 in my mind behind only Young.

This was a bold move by the Hawks, and I like it. He wasn’t expected in the first round by most before the draft, but he is the type of linebacker Seattle loves and needs. With Bobby Wagner, they will most likely be the top two backers in Seattle. He was already top 10 in our rankings, but this move probably gets him into the top 5 after the draft comes to a conclusion and we re-evaluate the rankings.

This is one pick I’d been calling for Baltimore for a while, as it is perfect for their defense and will be a nice IDP asset for your dynasty team. Queen will be the teams top linebacker as early as this year, so if you want him he will be top 5-7 in IDP rookies this year.

I love Miami’s draft haul in round one, as after three picks this team looks to be on the rebound after the exodus of talent last offseason. Noah will play across from stud Byron Jones, so expect him to be targeted on the regular. I’d expect a good amount of tackles, but I also expect it to take time for him to get up to speed at the NFL level. With his play strength and ability, he can slot himself in as probably CB3 in this class.

Most expected Gladney to be a first rounder, and with releasing Xavier Rhodes most had Minnesota taking a corner early. He’s got great footwork and should see playing time early in his career, and I’d slot him ahead of guys taken earlier in round one within my rookie drafts if I’m looking for corner help.

So far, the NFL draft has given us some fun IDP landing spots, and I expect days two and three to be just as productive! Remember when slotting IDPs into your overall rookie drafts, most of these guys you won’t need to consider until after round one of your rookie drafts. Chase Young is probably top five in the 2nd round, and then you can start slotting the backers in after pick 6 in round two. For more info, or if you have fantasy questions, hit me up on Twitter and check out our rookie rankings here on RotoHeat!