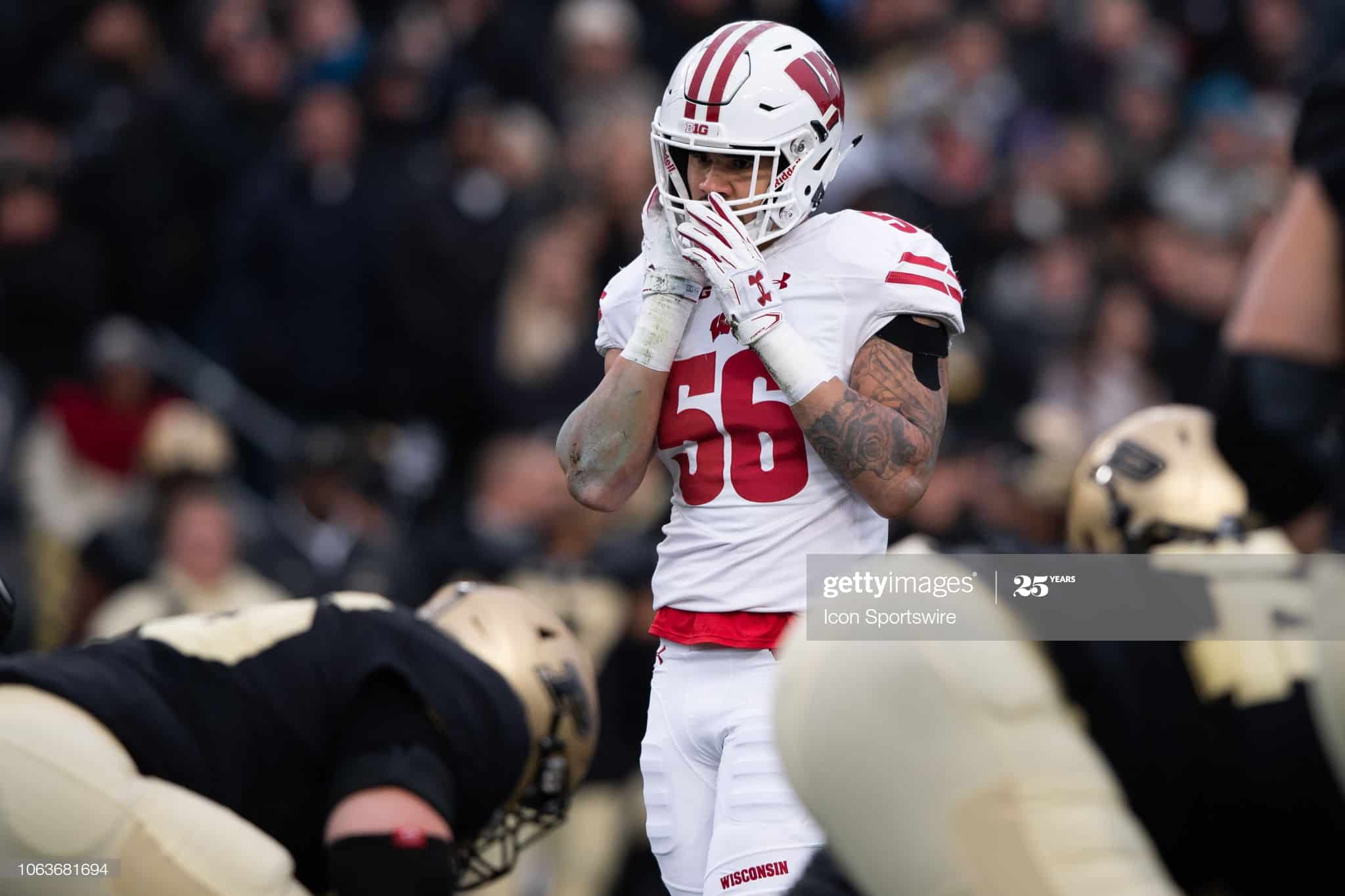 After playing Wide Receiver, Quarterback, and Linebacker in high school, Zack Baun was a three-star recruit that chose the Wisconsin Badgers and made the team as a walk-on linebacker. He broke his foot his Freshman year and did not play, and played sparingly across 7 games in his redshirt freshman year (ending with only 15 tackles) and missed all of his redshirt sophomore year.

Baun became a starter in his redshirt Junior year and ended with 62 total tackles (37 solo, 7.5 for a loss), 2.5 sacks, a fumble recovery, two passes defensed and an interception. His redshirt Senior year, though, is where Baun became a force. He ended the season with 75 tackles (52 solo, 19.5 for a loss), 12.5 sacks, one interception, one touchdown, two passes defensed, two forced fumbles, and was named a first team All-American (statistics courtesy of Sports Reference).

The New Orleans Saints drafted Zack Baun with the #74 pick (third round) in the 2020 NFL Draft. I do not see him as a likely starter right out the gate, but it is possible. Demario Davis and Kiko Alonso seem to be set at two of the three spots, but the options at the other starting spot (Alex Anzalone and Craig Robertson) are not exactly ideal. If I am drafting Baun this year, I would not be expecting to use him as a starter.

I want to note that Baun’s left foot was the reason he missed so much time his first few years in college. It did not appear to be an issue from his Junior year on, but this is something to consider as lingering foot issues are nothing to mess with.

Baun is going to a linebacking corps in need of some youth and consistency, with Davis (31), Alonso (turns 30 this season) Analone (turns 26 this season, cannot stay healthy and not prodcutive when playing) and Robertson (32) all being free agents after this season. If Baun does not start this year, I fully expect him to be a starter for the Saints next year and beyond.

Baun has shown himself to be capable of being more than a pass rusher, although I expect him to do very well at that in the league. I see him long term being a lesser version of another Badger–TJ Watt. I am not saying that Baun will get you the production that Watt has right away or long term, but they are similar in size and overall athleticism (Watt has a much better first step, and Baun is a bit stronger when compared to Watt as they enter(ed) the league). Even if Baun caps out at 75% of what Watt has shown so far, I think the Saints will end up very happy with their third round investment.

As a side note, if your IDP league has specific OLB and MLB positions, or utilizes the Edge spot that some sites now offer, Baun will have more value there, as opposed to in a regular LB IDP positioning league.

Zack Baun has generally been going later in drafts than you may expect. In a typical 12 team, 5 round rookie IDP draft, I have seen him normally going in the fourth round. With the updside he has, I feel that this is great value. There is not a lot of risk of taking him in the fourth round, even if he caps out as a LB3 longterm, which I feel is his longterm floor.

Let us know what you think about Zack Baun; we have him currently as the #19 overall rookie IDP and #10 rookie linebacker in our FREE IDP Rookie Rankings. You can catch our IDP-Specific Live Stream Monday Nights @ 9:30 Eastern over on YouTube! You can also find me over on Twitter!