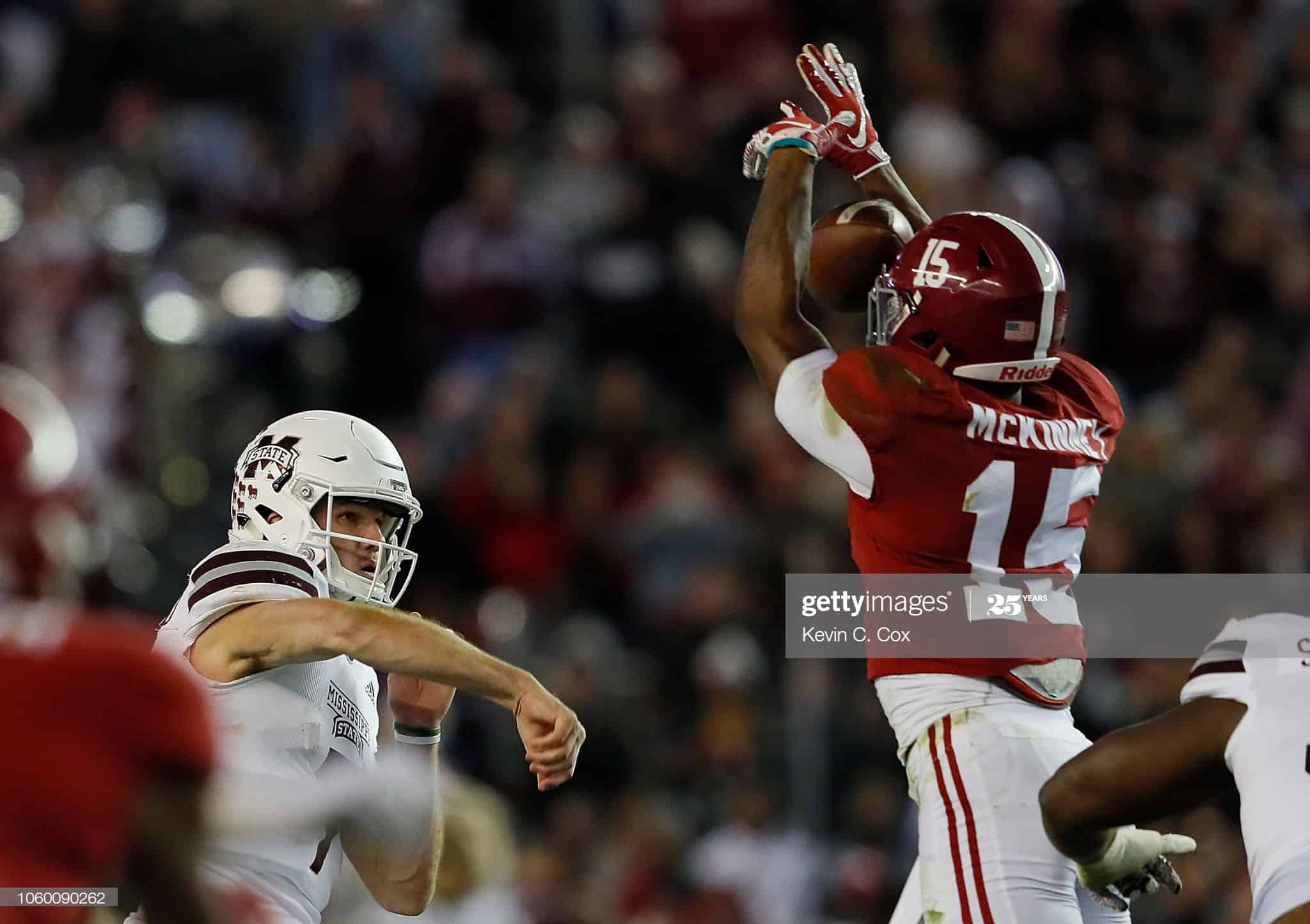 As a four-star recruit out of Georgia, Xavier McKinney chose the Alabama Crimson Tide over other colleges such as Ohio State, Georgia, and Clemson. He played sparingly across four game during his freshman year, and in his sophomore year he played in 15 games, accruing 74 total tackles (45 solo with 6 for a loss), three sacks, two interceptions, two forced fumbles and 10 pass deflections.

He declared for the 2020 draft after his junior year, one in which he had 95 tackles (59 solo with 5.5 for a loss), three sacks, three interceptions, 5 pass deflections, one fumble recovery, and four forced fumbles.

The New York Giants made McKinney the fourth pick in the second round of the 2020 NFL Draft and the first safety taken. On tape, McKinney shows great vision and ability to cover ground quickly. His knack for the ball, pass rushing ability, and tackling prowess give him everything you would want in a safety.

McKinney appears poised to start in the New York Giants stacked and rebuilt defensive backfield. Under contract for the near future, Sam Beal and Julian Love are returning as valuable, if likely back-up, players. James Bradberry was signed to start at cornerback, and Jabrill Peppers (who had been a top-10 safety prior to being hurt and put on IR after Week 12) should be back and healthy. Even with 2019 first round pick Deandre Baker’s status for the year in flux due to legal issues, this backfield looks much more formidable than it was just a year ago.

McKinney and Peppers give the Giants the potential to have a great real-life defensive backfield for the foreseeable future. Peppers is an unrestricted free agent after the 2021 season, but if he continues to play as he did last season, I would have to think the Giants will want to resign him and keep their safety tandem in place.

For fantasy purposes, both safeties probably limit each others’ ceilings; that said, there is no reason to think they could not both be high end DB2s or one DB1 and one DB2. The big play ability that McKinney brings gives him the high ceiling potential, and his tackling gives him a high floor, which I love to have in a safety.

Xavier McKinney should be a day one starter for the Giants this year. In a league using scoring similar to the RotoHeat IDP scoring discussed on our YouTube streams, you will likely have to spend a late second or early third round pick to get him. In other years he may have been closer to a mid second round pick, but with the depth of this draft on the offensive side of the ball, and the depth at the safety position in this draft, you will likely see McKinney fall further than you normally would. This is great value for a safety that looks like a likely DB2 right out of the gate with long-term DB1 potential.

Let us know what you think about Xavier McKinney, as we have him currently as the #9 overall IDP rookie, and #3 rookie defensive back in our free IDP Rookie Rankings. You can catch our IDP-Specific Live Stream Monday Nights @9:30 Eastern over on YouTube!