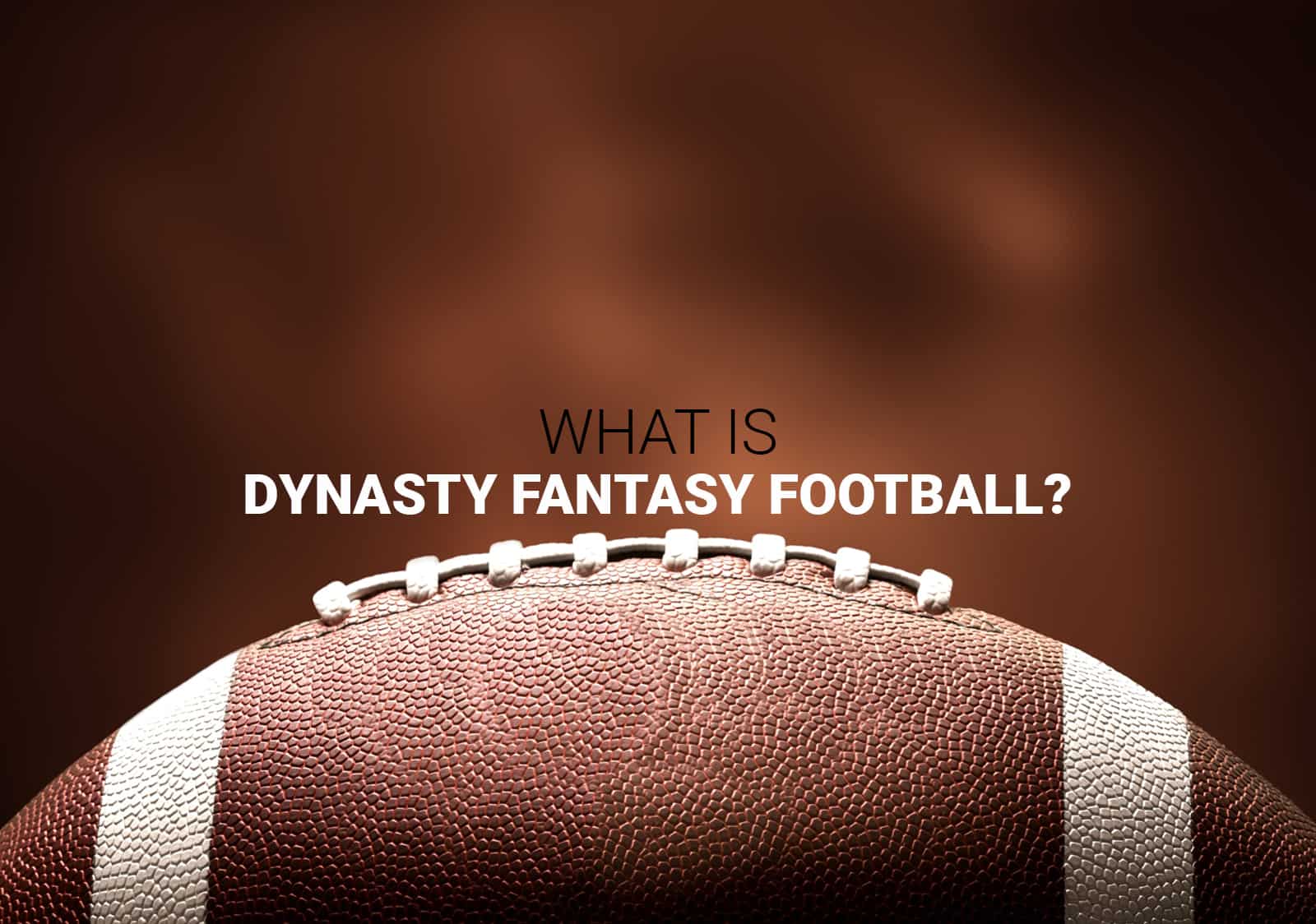 Throughout a fantasy season, I get asked “What is Dynasty Fantasy Football” as much as any other question. While fantasy football has been a large part of our society dating back to the 1990’s, and daily fantasy sports have taken the forefront of the current landscape, over the past 5-10 years, dynasty fantasy football has been one of the growing formats enjoyed by NFL fans worldwide.

So, What is Dynasty Fantasy Football?

To put it simply, dynasty fantasy football is the closest you can come to actually running an NFL organization without being a multi-millionaire that can start up their own football league. In dynasty fantasy football, you have a number of different variations, but the main concept is that you draft your team and then keep whatever players you have until the league folds or you trade them. Rather than redrafting each year, you have a rookie only draft and get to mold your franchise over time to fit your style. Your league year never stops, and to be successful, in most cases, you will have to be one of the most active members of your league.

In the rest of this article, I will explain some of the more nuanced parts of our main question, “What is dynasty fantasy football?”

What is Dynasty Fantasy Football? The Owners

Like normal redraft leagues, there are a number of formats that you can play in. One of the biggest differences that you will see in dynasty is the size of the league you are in. I personally run over 10 RotoHeat dynasty leagues that range from 12-96 total owners. I will break each down in a minute, but 8, 10, 14, 16, 32, 48, 52, and 96 owners are just some of the counts that I either see regularly or personally play in myself. The most common or “standard” league size is 12 (I do not have the exact data on percentages), but larger leagues have been growing in popularity over the past few years.

This particular article won’t get into a ton of detail on how to set up all these different leagues, but check out the article “How to Start A Dynasty League” article in the next couple of days. When discussing your 8-16 team leagues, they usually consists of just one copy of each player allowed and find the teams scheduled to play each other 1+ times throughout the season. In larger leagues of 32 or more owners, you will likely see multiple divisions and more than one copy of each player throughout the league. For example, the “RotoHeat 96 Leagues” feature 2 conferences that have 4 divisions of 8 teams in each. Another league that I am in features 52 teams broken up into 4 divisions of 13. As time goes on, more commissioners get creative and start new formats of dynasty fantasy football.

What is Dynasty Fantasy Football? The Rosters

Roster size is another league dependent variable, but in most cases, you will see a much larger roster size than you do in redraft leagues. Instead of 16-18 roster spots, most dynasty leagues will feature 30+ roster spots, making waivers and free agency much less prevalent, though not less important, than in yearly leagues. The idea is that you have the opportunity to build a roster that may not be competitive in 2021, but may be in 2022 and beyond. As far as what starters you should use, there are a number of variations there, too.

SuperFlex leagues have been gaining a lot of popularity over the last few years. Rather than the QB position mostly being flat from top to bottom, SuperFlex adds an additional QB starting spot and inherently raises the value of the position. We will have in-depth articles on what a SuperFlex league is and how to start one coming soon! While not as popular, there are a number of 2QB leagues as well, where owners MUST start 2QBs instead of the QB-eligible “Superflex” spot.

Another variation is TE premium leagues or two TE leagues. These help add value to the TE, which is usually the weakest position overall, and in many cases almost irrelevant to a roster without some sort of bonus.

In most of my leagues we start 1-2 QBs, 2 RBs, 3 WRs, 1 TE and then have at least 2 or 3 FLEX spots. This makes use of our deeper rosters and makes depth more valuable.

What is Dynasty Fantasy Football? The Taxi Squad

The taxi squad is one of the only things that is exclusive to dynasty fantasy football and not included in redraft leagues. A taxi squad is normally 4-6 spots reserved for young assets. Many leagues set up their taxi requirements differently, but in RotoHeat leagues, once the season starts, you can not add to your taxi squad, but you can promote. This basically allows you to reserve spots for your long-shot players without taking up an active roster spot, but doesn’t allow you to just move players on-and-off, which would basically just be added roster spots. In our leagues, all players on your taxi squad must be in year 1 or 2 of their careers.

What is Dynasty Fantasy Football? The Offseason & Rookie Draft

Unlike your yearly fantasy leagues, the offseason is full of work to do, and many owners enjoy this time as much, if not more, than the regular season. Normally trading will be opened up in the early months of the calendar year, allowing you to get ready for your upcoming rookie-only draft. Studying the incoming rookies is a very important part of dynasty fantasy football (check out RookieDraftGuide.com) and an area that you can build a solid squad from finding immense value.

Using ADP and rankings, you can get an idea of where the dynasty fantasy football community sits on most players. Take your personal rankings and adjust; for example, if your favorite running back has an ADP of 1.08 (First Round, Pick Eight), but you pick at 1.02, you may be able to trade back, receive the 1.08 plus another player you like, rather than over drafting him. On the contrary, if you don’t pick until 1.12, you may have to trade up to get your guy.

What is Dynasty Fantasy Football? The Conclusion