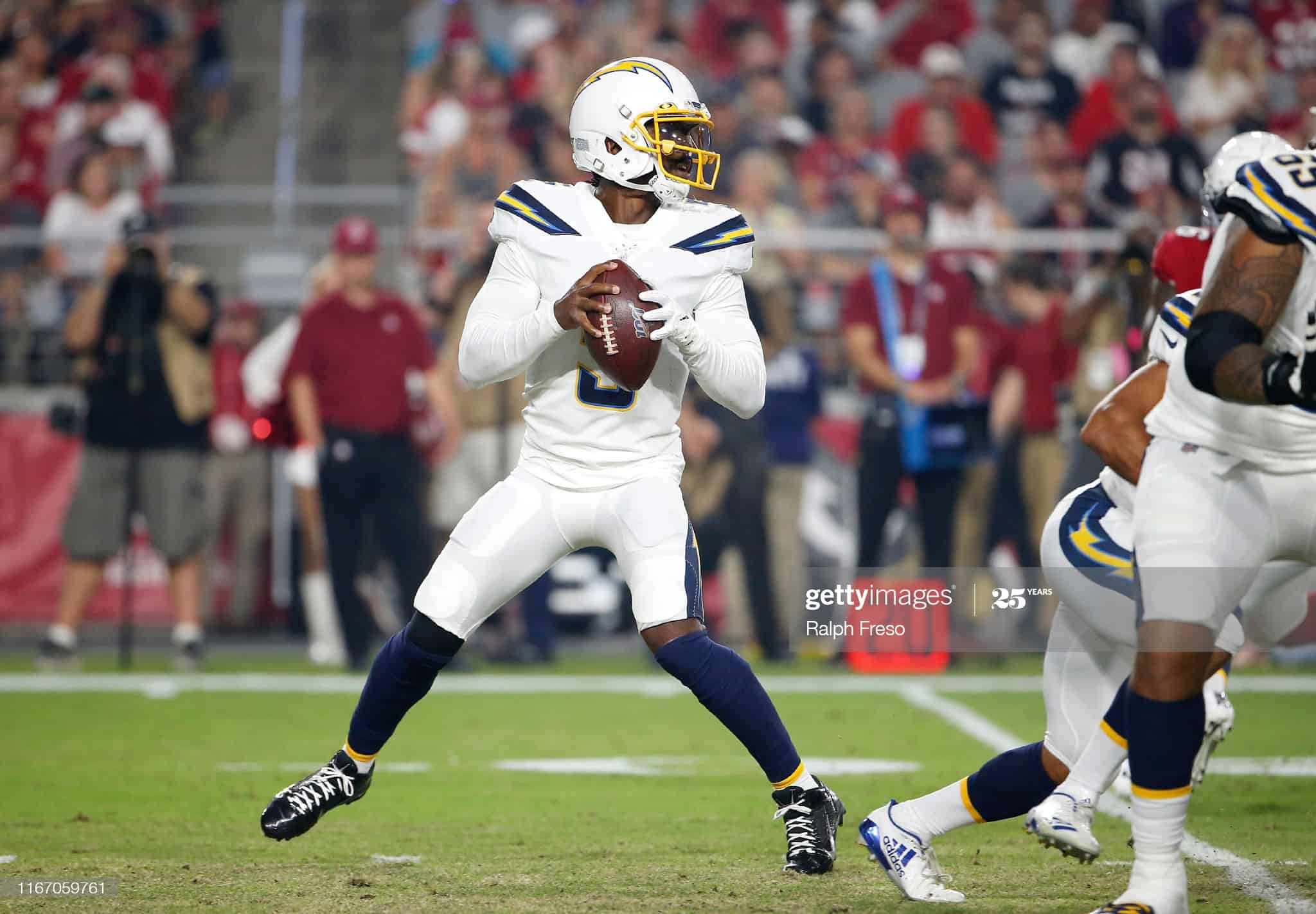 I can feel the hate coming already and all I have done is write the title, “Tyrod Taylor Fantasy Value 2020 – Top Sleeper.” You are already cursing me under your breath. Maybe you are even laughing out loud. The Tyrod Taylor hate has simply gone too far.

The rhetoric is that he can not throw the ball, and more specifically, the deep ball. The NFL has changed over the last couple years, and that is shown with an inflated completion percentage because of the number of higher percentage throws made. In 2017, the last season Tyrod was a starter, he was dead smack in the middle of the NFL in completion percentage at 62.6%.

People have been assuming that these numbers were bolstered by a “dink & dunk” approach which wasn’t the case at all.

From 2007-2017, 63 qualifying quarterbacks in a Pro Football Focus article titled, “Metrics that Matter: The league’s best deep-ball QBs“, Tyrod ranked 5th with a 101.5 deep passer rating. 5th! Out of all QB’s from 2007-2017! The list went like this; Aaron Rodgers, Kirk Cousins, Andrew Luck, Tony Romo, Taylor, Russell Wilson, Drew Brees and Tom Brady. Just look at the names on that list.

The rhetoric that there is no Tyrod Taylor fantasy value because he can’t throw is ludicrous. A simple google search of “Tyrod Taylor deep ball %” will supply plenty of articles talking about his success in throwing the deep pass.

So what has created this false narrative that Keenan Allen will benefit while a guy like Mike Williams will be hindered?

I think the first issue is that people don’t remember the type of offense that Tyrod Taylor played in during his days with the Buffalo Bills under defensive head coach Rex Ryan.

In these two seasons, the Los Angeles Chargers have thrown the 6th most in 2019 at 63.3% and were middle of the pack in 2018 at 58.9%. Tyrod will get the most volume he has ever had in his career in the Chargers offense. This is good for Tyrod Taylor’s fantasy value.

An angry Buffalo News article on November 23, 2017 was titled, “Bills not taking advantage of Tyrod Taylor’s deep passing ability” with a Google preview (the article is for subscribers) that says, “Bills receivers have confidence in Taylor’s ability to get them the ball downfield. That’s one of his strengths, he throws a great deep ball”.

There is a reason I used to call Buffalo the place WRs went to die.

There is an issue for every rookie QB not named Joe Burrow. COVID-19. While it looked like Justin Herbert could hurt the Tyrod Taylor fantasy value in 2020 after the NFL Draft, with COVID-19 eliminating a large portion of the offseason workouts, I think it is more likely that Tyrod plays the majority, if not all of the 2020 fantasy football season.

This has nothing to do with whether Justin Herbert is better than Tyrod Taylor, but Taylor has experience with these receivers and in real NFL football games. The Chargers could very well just treat 2020 as a red-shirt season because of COVID-19 and the fact that there will likely be zero preseason games for Justin Herbert to play in. Even if Tyrod only plays part of the season, his streaming value and acquisition cost could payoff for fantasy football owners while he is playing.

The other aspect that contributes to the Tyrod Taylor fantasy value is his running ability. This is yet another aspect that has changed in the NFL over the past few years with the success of Cam Newton, Josh Allen, and Lamar Jackson, who are better runners, but are almost for sure worse passers. Running the ball can add fantasy value, and with the running back room the Chargers possess and their longterm QB safely on the sidelines, they could utilize Tyrod’s legs more than anticipated. This is a guy that ran for over 550 yards in both 2015 and 2016 and had 427 yards in 2019.

I am not saying Tyrod Taylor is going to come out and blow everyone away. I just think that he gets hate that is not deserved. Not only that, but the thought that a guy like Mike Williams can’t succeed with Tyrod Taylor running the offense is crazy to me. He would most definitely be one of my late draft targets in deeper redraft leagues and one of the first QBs I would look at using as a streamer off the waiver wire when undrafted. This is simply a risk/reward play that could very well payoff.

Thanks for reading, “Tyrod Taylor Fantasy Value 2020 – Top Sleeper” and make sure to check out the Mike Williams 2020 Fantasy Outlook and join our Discord & Facebook Communities.