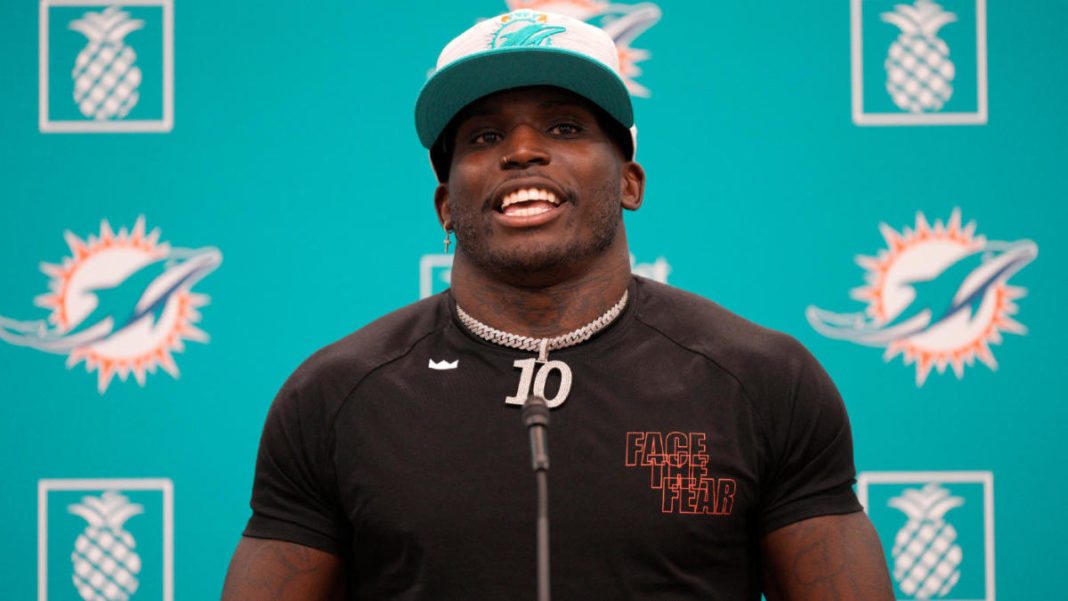 I will do my best to debunk the theory that the Tyreek Hill fantasy outlook is doomed in this article. With Tyreek Hill getting traded to the Miami Dolphins, Twitter exploded with Tweets saying that he was doomed because Tua Tagovailoa can’t throw the ball deep. While Tua may not have the strongest arm, this is just a surface-level opinion by any standards. I will show in this article, that it doesn’t take a ton of deep passes to either have a successful real-life offense or to have success in fantasy football.

While Tyreek Hill has been a big-play threat in his career, he has also evolved as a pass-catcher. No longer is he as reliant on the splash play, as he has been in the past. Just one year ago in 2021, Hill finished as the WR6 overall with 296.5 fantasy points. Hidden in there was an evolution of the Hill himself. Rather than relying on the chunk plays, he became a more consistent wide receiver. The most receptions he had coming into 2021 were the 87 from each 2020 and 2018. He beat that by 24 while hauling in 111 receptions in 2022.

He also topped his previous high of 137 targets, by getting to 159. Part of this is because of the extra game played, but he also set a career-high for receptions per game, improving from 5.8 in 2020 to 6.5 in 2021. There was undoubtedly an evolution this past season and it is only proven further throughout this article. Before we move on though, how does the Patrick Mahomes to Tyreek Hill connection compare to the Tua Tagovailoa to Jaylen Waddle connection?

Listen, I am not here to say that Patrick Mahomes isn’t one of or the best quarterback in the NFL. I do need to point out some facts though. When I started the research for this article, I intended on using Drew Brees as my example of not needing to consistently throw the ball deep, to have success in real life or fantasy. I had already pulled data going back to 2016 when I noticed something in the 2021 data.

According to Fantasy Pro’s Advanced Quarterback Stats, Tua Tagovailoa already topped Mahomes in a couple of stats that were surprising.

Other QB’s in This Range:

The idea that Patrick Mahomes, or any QB for that matter, needs to heave the ball way downfield is a myth. Despite the low average per attempt on air yards of QBs with at least 200 pass attempts, each of the other offenses from above averaged over 26 pts per game and were top 10 in the league in scoring. The Chiefs were 4th at 28.2 PPG, Chargers were 5th at 27.9 PPG, and the Packers were 10th at 26.5 PPG.

Now don’t get it twisted, these quarterbacks can do amazing things and I am not saying that Tua is as good or better than any of them. My main point here is that despite the NFL leaning more on pass-heavy offenses, that doesn’t mean that the average air yards per pass attempt is higher now than it has been in the past.

Average Air Yards Per Attempt (all QBs over 200 attempts)

It is easy to say 2017 was just a really bad year for talent at the QB position. But at the top-end, there were five quarterbacks that averaged 4.9 or more AIR/A.

Offenses are doing a better job of getting their receivers open and open fast. This allows the receiver to get into the open field and make things happen after the catch, which leads us to…

One Difference Between Tua Tagovailoa and Patrick Mahomes is Playmakers

Again, I know that Mahomes can do a lot of stuff that Tua just can’t, but there was another major difference in one area for the Chiefs and Dolphins in 2021 and that was playmakers on the offense.

While Tua was more accurate 68% vs. Mahomes 66%, Mahomes playmakers were absolutely deadly in YAC (Yards After the Catch). According to Pro Football Reference, Patrick Mahomes was 2nd in the NFL in YAC at 6.2. Only Jimmy G topped him with 6.5. This makes sense, Deebo, George Kittle, Brandon Aiyuk and the entire 49ers run game makes plays in that offense. The same can be said for the Chiefs, who had four players finish top 21 in YAC totals.

Miami just didn’t have those types of playmakers that Kansas City had. Jaylen Waddle had 439 yards after the catch, which was 19th place and then you go all the way down to Myles Gaskin at 83rd overall, with just 250. No other Miami player was inside the top 100. This could be chalked up to the QB’s ability with accuracy, but again according to Pro Football Reference, Tua was tied for 4th in the entire league in On Target % at 80.1%. Mahomes was 11th at 77.5%. Side Note, surprisingly, Jalen Hurts finished 9th at 78.2%.

The Tyreek Hill trade to Miami gives Tua another playmaker that can get a ton of yards after the catch. When you couple this with the fact that Hill will get a higher percentage of touches with the Dolphins, vs. what he got with Kansas City, any deficiencies in downfield throws should be masked by that uptick in volume.

On top of that, it has already been said by new Dolphins coach Mike McDaniel, that he wants to use Hill similarly to Deebo Samuel. A large target share plus more rushing opportunities should help keep Tyreek Hill as one of the best fantasy options at wide receiver.

Do you agree with me or do you think Tyreek Hill is going to lose a lot of fantasy production by moving from Patrick Mahomes to Tua Tagovailoa? Comment on this article, chastise me in Discord, Tweet at me on Twitter, or meet me in our dynasty fantasy football community on Facebook.