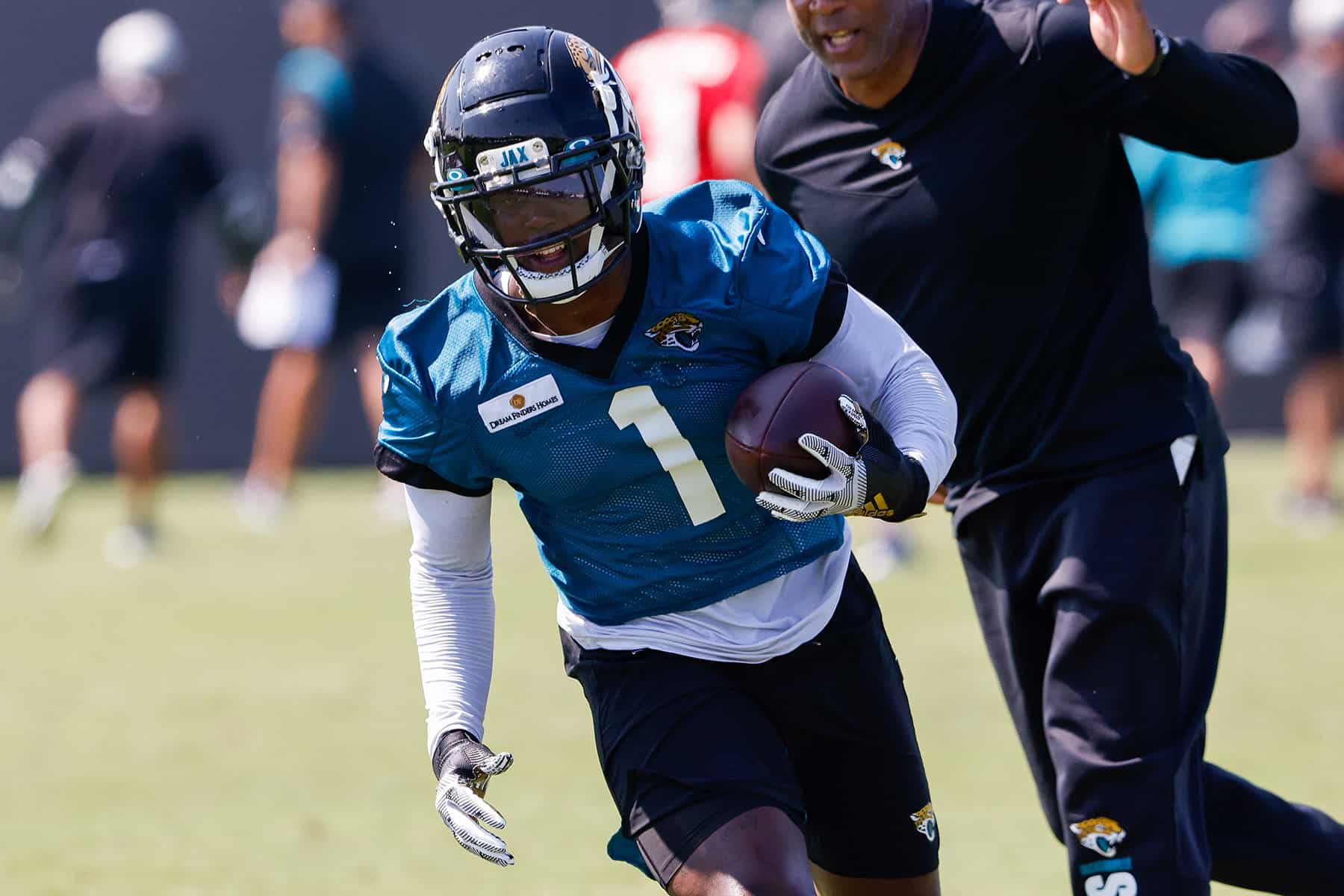 You would think that the Travis Etienne fantasy outlook was a super positive one given his ADP of RB16 on Underdog Fantasy. In regards to that, I am going against the grain here to paint a picture of how he is destined to fail those that draft him at his current ADP.

Coming Back From Injury

It was an unfortunate site when Travis Etienne was seen limping after just three plays in the final preseason game of his rookie season. Everyone was ready to see the combination of Trevor Lawrence and Etienne at the pro level after they dominated college football together. Sadly, the limping was due to a Lisfranc injury and Travis Etienne would be sidelined for the entire 2021 season.

Being 12 months removed from surgery near the start of the 2022 season is a positive but like ACL, MCL, and Achilles injuries, there is no guarantee that a player will ever regain full mobility of their foot. This is obviously not good but doesn’t mean that Etienne will have issues with burst or change of direction, it is just one possibility.

What we have seen in the past is that players do tend to lose production the first year coming off of the injury. As seen in Adam Hutchison’s article on 4For4, the two most recent players to suffer from a Lisfranc injury have seen their production drop by 14.4% (Evan Engram) and 19.2% (Marquise Brown).

The issue for gauging the Travis Etienne fantasy outlook is that he has no NFL history to go on.

When it comes to any Jaguars running back, I believe Doug Pederson is bad for their fantasy outlook. I mean, this guy LOVES to throw the ball and that is good, running back targets are great. The issue is that he doesn’t utilize his RBs in the passing game to the extent that separates them from the “average” pass-catching backs in the league.

Here is some data on his top pass-catching running backs in his five seasons as the head coach of the Eagles.

The issue is that we really want to see 5-6 targets per game to really separate from the mid-level pass-catching running backs in the NFL. We are talking about the guys like David Montgomery who averaged 3.6, Darrel Williams 3.4, and even Michael Carter’s 3.9. This is important for fantasy success for Etienne. Let me tell you why.

There Are No “Workhorse” RBs in Pederson’s Coaching History

Mind you, in a small sample size, I talked about this ad nauseam after the Eagles drafted Miles Sanders in 2019. No back in Pederson’s head coaching career had reached even 200 carries. The argument then, was that Pederson had never had as good of a player as Miles Sanders at running back. While that was true, the facts didn’t change. Here are the attempts leaders and their per game average and how their average ranked vs. all other running backs.

Before I get too far ahead, I will say that there were a few instances of players that averaged more attempts per game, but didn’t have as many attempts because of missing games. Jay Ajayi in 2018 averaged 11.25 attempts in his 4 games and Jordan Howard averaged 11.9 in his 10 games in 2019. Even with those two factored in instead of Sanders and Adams, the total average comes out to 11.91 attempts per game for the top RB.

Obviously, we saw Sanders break that mark in Pederson’s final year, so it is not impossible to see a RB get to 13.5+ attempts per game. The question is if Travis Etienne is that running back and even if he is, is 2022 the season that that will happen? More about that later.

How Many Touches Does Etienne Need to Hit Value?

Looking at the top 24 PPR running backs from 2021, we can see that the fewest touches per game were Darrel Williams at 11.2, and in the top 16, where Etienne needs to finish, we see Cordarrelle Patterson at 12.8.

We have already talked about Pederson’s usage of running backs, as well as the efficiency dip of players coming off of Lisfranc surgery, but how troublesome could the combination be for Travis Etienne’s fantasy production? For me, there are three very serious concerns here.

I know some people are going to think three or four running backs getting a decent amount of action is crazy, but the last time Pederson was coaching, his team ran the ball 403 times and four players had at least 50 rushing attempts. This trend continues:

Here we break down the number of pass attempts to go to the top targeted running back.

I think we can all agree that a healthy Etienne could probably be somewhere around 10-12% when healthy.

If we are being optimistic in thinking that the Lisfranc injury will have no effect on Etienne and that he is the top rusher, even when James Robinson is full go, that puts Etienne somewhere between 200 and 232 total touches. That is with an 82.5% catch rate, which would’ve been top 10 at RB in 2021.

If RB16 is at 206.3 fantasy points again, Etienne would have to average .89 fantasy points per touch if he got the 232 touches. That is exactly the efficiency that James Robinson & Ezekiel Elliott produced in 2021.

If he only gets the 200 touches, he would have to average 1.03 fantasy points per touch. That is Aaron Jones, Leonard Fournette, and Darrel Williams’ efficiency from 2021.

I think there is a considerable risk that he doesn’t even reach the 200 in 2022. Not because of talent, but because of the combination of Pederson & the injury.

What if Pederson Changes

I do not think that there is a good argument against a coach changing usage or philosophies. It is very possible that he loves Etienne so much that he, paired with Trevor Lawrence, utilizes Etienne in a way that a Pederson offense has never used a running back.

The problem is that I do not want to be the one assuming this risk with valuable draft capital. Does that mean I could miss on Etienne? Absolutely. But with Etienne not being his draft pick, coming off of a Lisfranc surgery, plus the five years of running back usage we saw between 2016-2020 for the Eagles, I would rather take my shots elsewhere.

Looking at Etienne’s 35th overall ADP, here is a list of players I would rather target and why.

Let’s discuss it on Twitter and/or the RotoHeat FB Community. Just @ me and tell me how much you love or hate my take.