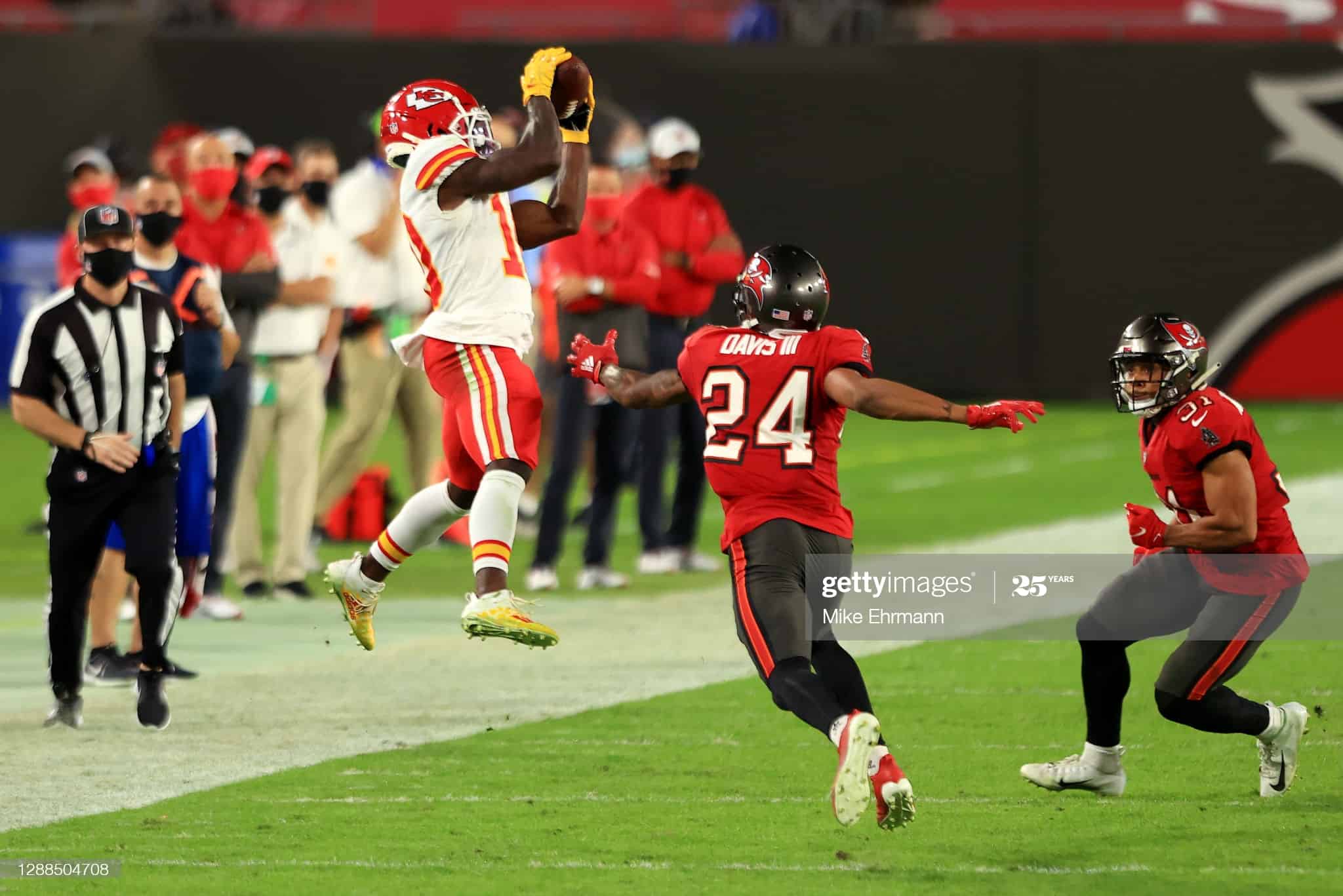 JACKSONVILLE, FLORIDA – NOVEMBER 29: Jarvis Landry #80 of the Cleveland Browns fails to complete a reception in the first half against the Jacksonville Jaguars at TIAA Bank Field on November 29, 2020 in Jacksonville, Florida. (Photo by Sam Greenwood/Getty Images)

INDIANAPOLIS, INDIANA – NOVEMBER 29: Derrick Henry #22 of the Tennessee Titans looks to gain yardage in the third quarter against Rock Ya-Sin #26 of the Indianapolis Colts during their game at Lucas Oil Stadium on November 29, 2020 in Indianapolis, Indiana. (Photo by Andy Lyons/Getty Images)

EAST RUTHERFORD, NEW JERSEY – NOVEMBER 29: DeVante Parker #11 of the Miami Dolphins runs after a catch against the New York Jets during their NFL game at MetLife Stadium on November 29, 2020 in East Rutherford, New Jersey. (Photo by Elsa/Getty Images)

GREEN BAY, WISCONSIN – NOVEMBER 29: Allen Robinson #12 of the Chicago Bears is brought down by Raven Greene #24 of the Green Bay Packers during a game at Lambeau Field on November 29, 2020 in Green Bay, Wisconsin. The Packers defeated the Bears 45-21. (Photo by Stacy Revere/Getty Images)

DENVER, COLORADO – NOVEMBER 29: Latavius Murray #28 of the New Orleans Saints rushes for a 36 yard touchdown during the third quarter of a game against the Denver Broncos at Empower Field At Mile High on November 29, 2020 in Denver, Colorado. ( (Photo by Matthew Stockman/Getty Images)

ARLINGTON, TEXAS – NOVEMBER 26: Antonio Gibson #24 of the Washington Football Team rushes for a five yard touchdown ahead of defenders Xavier Woods #25 and Rashard Robinson #28 of the Dallas Cowboys during the first quarter of a game at AT&T Stadium on November 26, 2020 in Arlington, Texas. (Photo by Tom Pennington/Getty Images)

INGLEWOOD, CALIFORNIA – NOVEMBER 29: Deebo Samuel #19 of the San Francisco 49ers runs with the ball during the second half against the Los Angeles Rams at SoFi Stadium on November 29, 2020 in Inglewood, California. (Photo by Joe Scarnici/Getty Images)