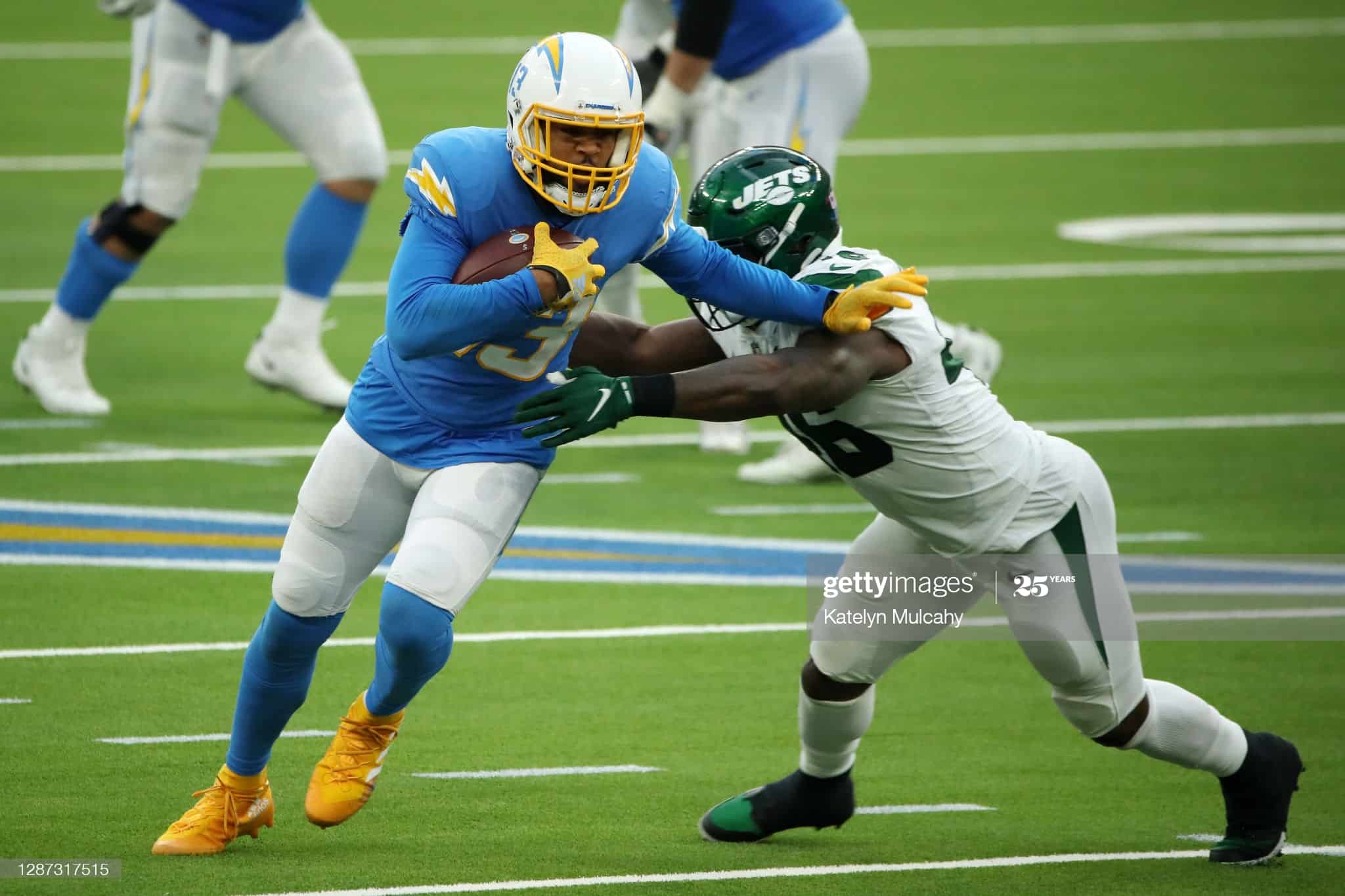 JACKSONVILLE, FLORIDA – NOVEMBER 22: Diontae Johnson #18 of the Pittsburgh Steelers carries the ball as Joe Schobert #47 of the Jacksonville Jaguars defends during the first half at TIAA Bank Field on November 22, 2020 in Jacksonville, Florida. (Photo by Julio Aguilar/Getty Images)

DENVER, COLORADO – NOVEMBER 22: Salvon Ahmed #26of the Miami Dolphins carries the ball during the first quarter against the Denver Broncos at Empower Field At Mile High on November 22, 2020 in Denver, Colorado. (Photo by Matthew Stockman/Getty Images)

LAS VEGAS, NEVADA – NOVEMBER 22: Wide receiver Tyreek Hill #10 of the Kansas City Chiefs makes a pass reception past the defense of cornerback Damon Arnette #20 of the Las Vegas Raiders during the first half of an NFL game at Allegiant Stadium on November 22, 2020 in Las Vegas, Nevada. (Photo by Christian Petersen/Getty Images)

MINNEAPOLIS, MINNESOTA – NOVEMBER 22: Adam Thielen #19 of the Minnesota Vikings catches a touchdown pass against Anthony Brown #30 of the Dallas Cowboys in the third quarter during their game at U.S. Bank Stadium on November 22, 2020 in Minneapolis, Minnesota. (Photo by Hannah Foslien/Getty Images)

NEW ORLEANS, LOUISIANA – NOVEMBER 22: Michael Thomas #13 of the New Orleans Saints makes the catch for the first down as Ricardo Allen #37 of the Atlanta Falcons defends in the third quarter at Mercedes-Benz Superdome on November 22, 2020 in New Orleans, Louisiana. (Photo by Chris Graythen/Getty Images)

MINNEAPOLIS, MINNESOTA – NOVEMBER 22: Ezekiel Elliott #21 of the Dallas Cowboys carries the ball in for a touchdown against Eric Kendricks #54 and Anthony Harris #41 of the Minnesota Vikings during their game at U.S. Bank Stadium on November 22, 2020 in Minneapolis, Minnesota. (Photo by Adam Bettcher/Getty Images)

TAMPA, FLORIDA – NOVEMBER 23: Robert Woods #17 of the Los Angeles Rams celebrates after scoring a 4 yard touchdown against the Tampa Bay Buccaneers during the first quarter in the game at Raymond James Stadium on November 23, 2020 in Tampa, Florida. (Photo by Mike Ehrmann/Getty Images)