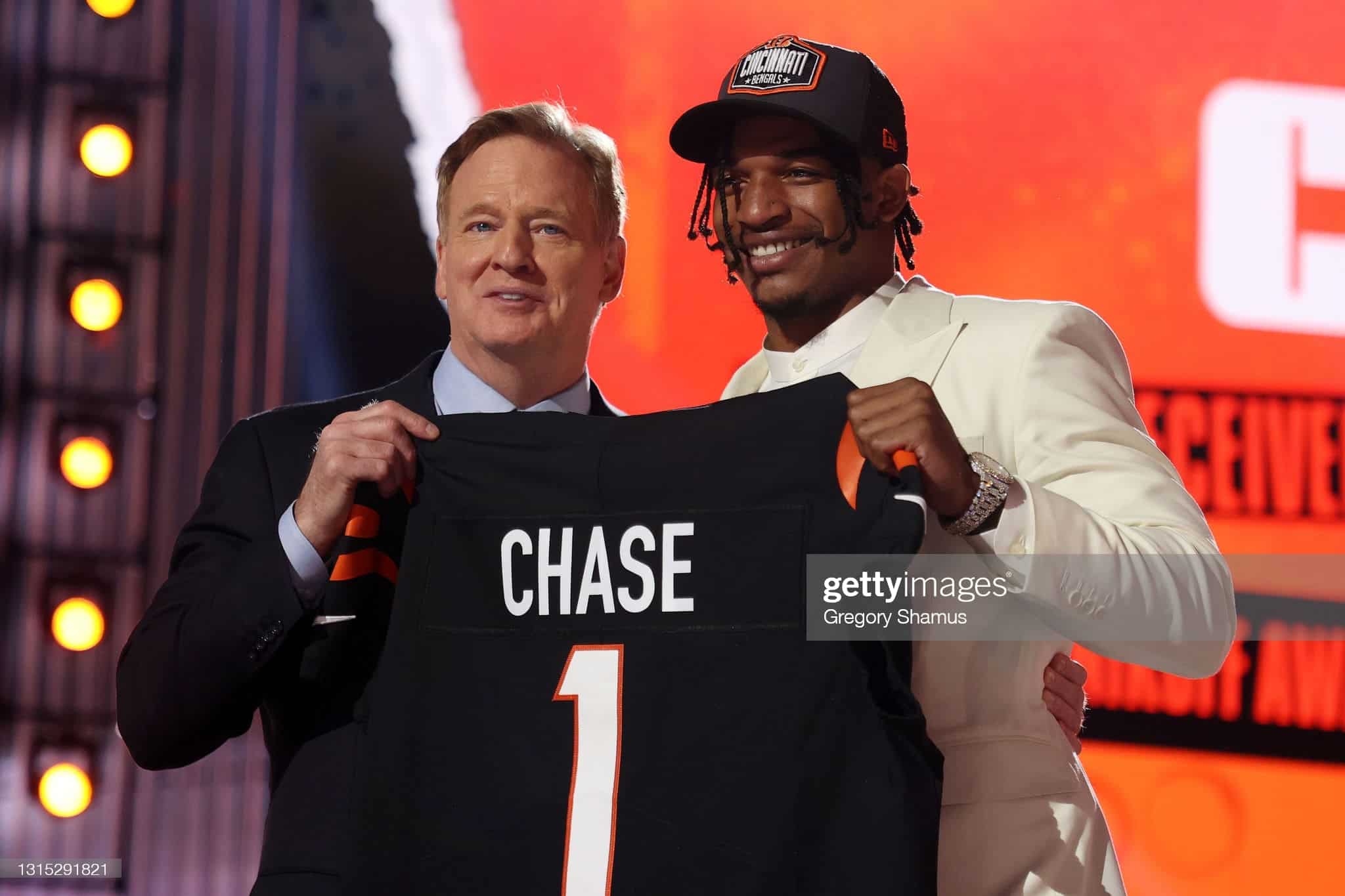 For those that have been listening to this podcast for a while will know that I bring you an annual hit rates episode. Those episodes take a look at historical data from seasons past in order to predict the percentage of those drafted likelihood to be fantasy relevant in their careers. Have a listen to episode 135 for this year’s version if you are interested. In the three years that I have done these studies, nothing has changed the percentages for the most part are consistent each and every season.

The top players selected at each skill position in this year’s NFL draft currently occupy the top ranking at their position in my rankings.  Trevor Lawrence, Najee Harris, Ja’Marr Chase, and Kyle Pitts.  I believe it is safe to say that my top ranked players are ranked this way by many. There may be some differences out there, but I feel its safe to say these are the consensus top ranked players at their position.

I thought it would be interesting to use the same historical data that I use to determine hit rates, to determine how often the first selected QB, RB, WR, and TE were indeed the right players to select first in your rookie drafts.  Simply put I want to know how often the top players selected by NFL General Managers, turned out to be the top fantasy players in their draft class.

Of the 11 first selected quarterbacks from 2010-2020, eight of them were the first overall selection in their NFL draft.  Sam Bradford, Cam Newton, Andrew Luck, Jameis Winston, Jared Goff, Baker Mayfield, Kyler Murray, and Joe Burrow.  In addition to these eight, EJ Manual, Blake Bortles, and Mitchell Trubisky were also the first QB selected.  Manual was the 16th overall selection in 2013, Bortles 3rd overall in, 2014 and Trubisky was second overall in 2017.

Now as one would expect the eight members of this QB group that were selected first overall for the most part have gone on to have successful careers. Four of the eight were the top fantasy QB in their rookie season, the four that were not, were Andrew Luck, in 2012, who finished as the QB9 in his rookie season, behind Robert Griffen III who was QB5.  EJ Manual finished his rookie season as the QB28, second in the class to Geno Smith who finished at QB20 in 2013, Jared Goff finished as the 4th highest scoring in 2016, behind Dak Prescott, Carson Wentz, and Cody Kessler.  In 2017 Mitchell Trubisky finished as the third highest scoring rookie QB, behind Deshaun Watson, and DeShone Kizer.

45% of the top drafted QBs turned out to deliver the top fantasy rookie season.  When we look at the span of their careers, Sam Bradford, Cam Newton, Andrew Luck, Jameis Winston, and Kyler Murray all the first QB taken in their respective drafts have had the best careers to date relative to those in their draft class.

If you have drafted Trevor Lawrence in your rookie drafts this season, you should feel good, you are also likely not alone, the majority of dynasty managers likely have done the same.  Odds are based on the past 11 seasons that Lawrence stands a 45.4% chance of being the best QB in the 2021 draft class.

Of the 11 running backs selected as the top back in their class, 5 went in the top 10, and all but two of them (Giovani Bernard, and Bishop Sankey) were first round selections.  Only two of these running backs were both the highest drafted and the highest scoring rookie running backs, Ezekiel Elliot and Saquon Barley.  The best rookie season was Barkley’s dominate 2018 season where he finished with 385.8 PPR points and as RB1 overall.  The worst was 2014’s Bishop Sankey, who finished with 76.85 points, the 4th best in his class and he finished as RB45.

When we take a look at the entirety of these backs careers, Ryan Matthews, Mark Ingram were the best RBs in the 2010 and 2011 draft classes.  2012 is debatable but in the end its Lamar Miller, a 4th round selection.  Le’Veon Bell rules 2013, 2014 goes to Devonta Freeman another 4th round selection and 2015 is currently Todd Gurley.  2016-2018 is straight forward, Ezekiel Elliot, Christian McCaffery and Saquon Barkley are the tops in their class. 2019 as of now is David Montgomery, not Josh Jacobs or Miles Sanders.  Monty was the 4th RB selected in 2019 and he went in the third round.  Last year it Was Jonathan Taylor.

4 of the 11 RBs selected first in their draft year have produced the best fantasy career to date.  If you are staring down Najee Harris in your rookie drafts, well there is a chance based on the past 11 seasons that Harris has a  18% of being the highest scorer in his rookie season and a 36% chance of being the best back on this draft class.

The wide receiver position as is to be expected offers the most variance of all the skill positions, bigger sample size after all.  In the past 11 seasons there. have been some solid WR draft classes and some solid draft picks by NFL executives.  Fortunately for us, there have been some really bad ones as well.  Let’s face it the bad picks are just more fun to look back on. All eleven of the highest drafted receivers were 1st round selections, and 6 of the 11 went in the top 8.

Only 3 of the first drafted WRs off the board ended up having the top rookie season, AJ Green, Justin Blackmon, and Amari Cooper.  The other eight, were not even close.  Of those eight other WRs to come off the board first in their respected drafts, the best rookie season came from Sammy Watkins in 2014, Watkins finished as WR27.

Despite having the best rookie seasons, the best, we saw from the trio of AJ Green, Justin Blackmon and Amair Cooper was Blackmon’s WR17 2012 season.  None of the rookie wide receivers had the impact that some of the running backs did as rookies.  There has been a total of three WRs drafted since 2010 that had a top-12 WR season, Odell Beckham Jr., (3rd drafted) in 2014 , Michael Thomas, (6th drafted), in 2016, and Justin Jefferson(5th selected) a season ago.

When we take a look at the entirety of these receiver’s careers, Demaryius Thomas ruled the 2010 class, Julio Jones, 2011, and late third round selection TY Hilton emerges as the best from 2012.  DeAndre Hopkins who went off the board after Tavon Austin in 2013 dominated that draft class, Mike Evans appears to be the best of the 2014 draft class which is the best WR class we have seen in the past 11 seasons.

From 2015 through 2020, its Amari Cooper in 2015, Michael Thomas in 2016, Juju Smith Shuster a second round selection in 2017, and if its not Juju its Chris Godwin or Cooper Kupp both third round selections. 2018 goes to Calvin Ridley, 2019 to AJ Brown with DK Metcalf right on his heels, and a season ago thus far goes to Justin Jefferson.

2of the 11 WRs selected first in their draft year have produced the best fantasy career to date.  If you see Ja’Marr Chase as a can’t miss prospect you could be right, just be aware of the fact that Corey Coleman, Sammy Watkins, and Corey Davis were seen in the same light in their rookie seasons.

I have Chase as my WR1 and by a decent margin over my next highest ranked WR.  This is not an exercise to sway you from that thinking, despite the odds are saying that there is an 81% chance he shouldn’t be.  This isn’t a prefect science by any means, but it should give you pause.  Chase in my opinion is in the 18% that will be the best in his class.

From the position with the largest sample size in the wide receivers to the smallest, the Tight End.  There has been a movement for years in fantasy football to ban the kicker, personally I don’t really care, I don’t play in any leagues with a kicker and if I did I would just stream the position all season.  I feel the same way about the Tight End.  There are three maybe four TEs that I care about and after that I will take whatever I get.

This year the top TE selected in the NFL draft was Florida’s Kyle Pitts.  I am not at all ashamed to say I have a man crush on him. I can’t remember being this excited for prospect  Pitts is after all my top ranked player in 1QB formats and 4th in SF rankings.  History as I will discuss shortly does not support my ranking, in fact its not even close.

Of the 11 TEs studied, 3 of the top drafted TEs had the best season among their peers.  Kyle Rudolph, Hunter Henry, and Cole Kmet.

The other 7 that has the top rookie season, Rob Gronkowski drafted in the second round in 2019, Dwayne Allen in 2012, was a third-round selection and Jordan Reed was the top TE in 2013 also a third-round draft pick.

2014 Jace Amaro led the way, he finished that season as TE24. Don’t know who Jace Amaro is, don’t feel bad neither do I.  Amaro was selected 49th overall by the New York Jets in the 2014 NFL Draft and was the third tight end selected after Eric Ebron and Austin Seferian-Jenkins. Amaro had 38 receptions for 345 receiving yards and two touchdowns in 14 games. He missed 2015 with injury and appeared in 3 games for the Tennessee Titans in 2016, the last three games of his career.

Career wise Rob Gronkowski leads all 2010 TEs by miles, Kyle Rudolph in 2011, and Coby Fleener in 2012.  The class of the 2013 group is third round selection Travis Kelce, 2014 Eric Ebron has had the best career to date.  2015’s TE class is so bad I cant pick a leader, seriously its bad. Top pick Maxx Williams has averaged 64 PPR points in his six seasons.  Jesse James with tow top-24 TE’s is likely the best from this group, told you it was bad.

2016 Hunter Henry is the man pushed a little by Austin Hooper and even less by Tyler Higbee.  2017 the year with three first round TEs and the best of that group is a 5th round selection out of Iowa, George Kittle. Third rounder Mark Andrews is the king of the 2018, Noah Fant narrowly over TJ Hockenson takes 2019 and after one season Cole Kmet leads the 2020 group. 5 of the 11 TEs selected first in their draft year have produced the best fantasy career to date. Its not a huge number but its higher that the RBs and the WRs, tied with the QB.

When you look at all skilled position players drafted from 2010-2020, the 44 of them who were the highest selected at their position have gone on to be the best in their class 16 times. 36% of them.

The reality is these are likely the top ranked players by the majority of us folks who rank players.  The highest drafted  players at each position dating back to 2010 never finished their rookie season as the top 4, and have not gone on to have the best fantasy carers at their position either.

History would suggest that my rankings are wrong before the season has even started.