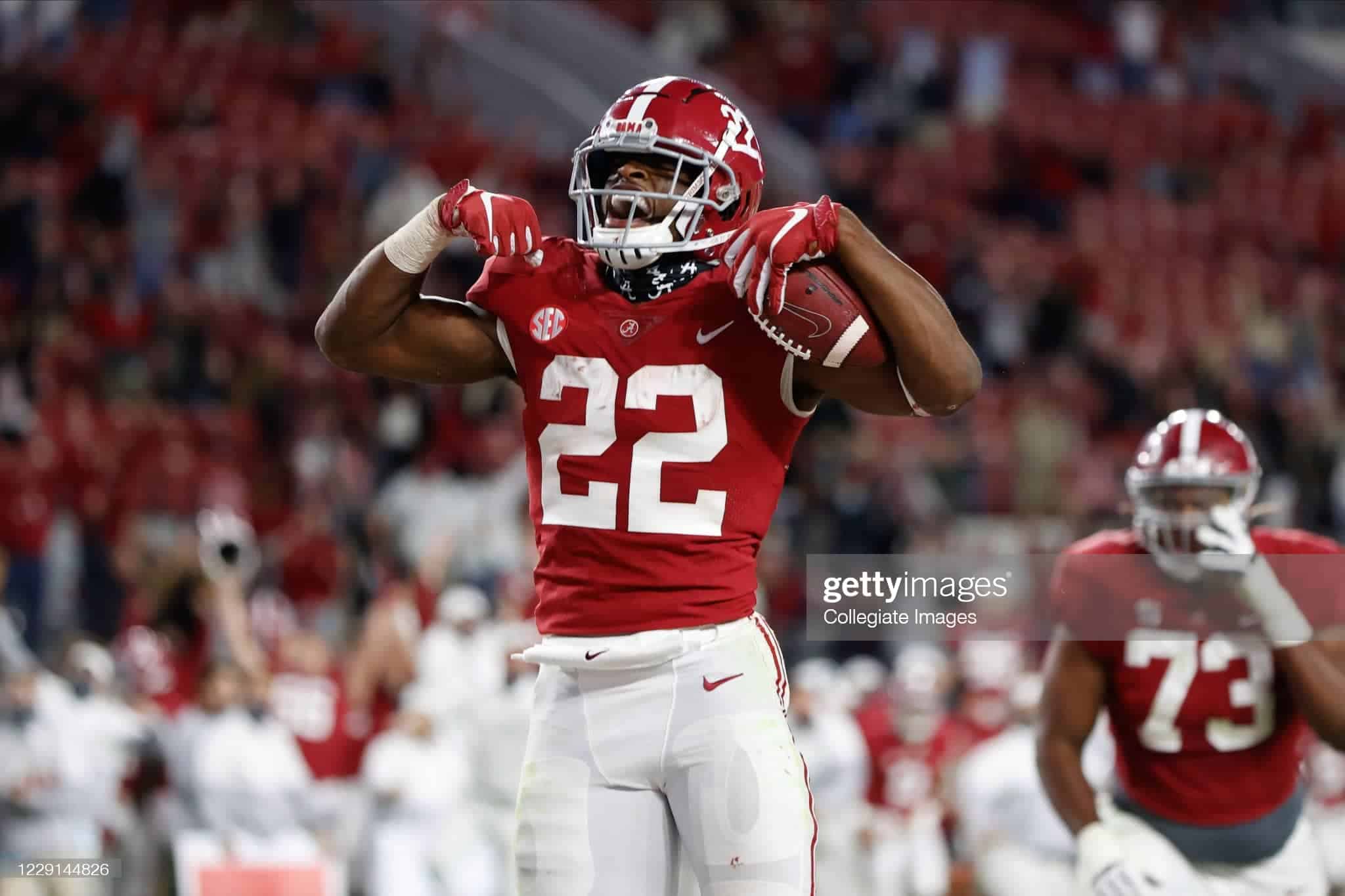 The Top 50 Series continues with the profile of Pittsburgh Steelers’ RB Najee Harris.

Alabama RB Najee Harris was selected by the Pittsburgh Steelers in the 1st round (24th overall) in the 2021 NFL Draft. With the pick, the Steelers made Harris the 1st running back selected–one pick before Clemson RB Travis Etienne went to Jacksonville.

Najee Harris spent four years at Alabama, appearing in 51 games for the Crimson Tide. In those 51 games, he totaled 3,843 yards on 638 carries and he scored 46 touchdowns. In addition to his rushing totals, Harris added 80 receptions for 781 yards and 11 touchdowns. His best season came in his senior year in 2020. Harris rushed for 1,466 and caught another 425 yards while scoring 30 times on 294 touches. Harris finished his career as the all-time leader in rushing yards, total scrimmage yards (4,624) and touchdowns (57) for the Crimson Tide.

The vast majority of Harris’s touches and production came in his final two seasons at Alabama. During his first two seasons, he shared a running back room with Damien Harris and Josh Jacobs. He became the Crimson Tide’s starting RB during his junior season after both Harris and Jacobs left for the NFL.

Najee Harris profiles as a three-down back at the NFL level and should be the top ranked RB in this 2021 draft class. He is a power back that runs with determination and versatility both as a between-the-tackles runner and as a perimeter rushing threat. Harris is an accomplished pass-catcher out of the backfield, and he’s made strides in his pass-catching ability every season. It’s his work in the passing game that makes him especially attractive in this Steelers offense.

Najee Harris joins an offense that finished last in the NFL a season ago running the football with 1,351 yards on 373 attempts. In addition to finishing last in rushing yards, the Steelers were 28th in attempts and last in yards per carry with 3.62. Their 12 rushing TDs were 29th best, 81 rushing first downs ranked 31st, and their 84.4 yards per game was dead last. The Steelers need for a RB is on full display here.

James Conner, Benny Snell and Anthony McFarland struggled a season ago as noted above, but was it their inability to produce or was it the porous offensive line? According to PFF the Steelers were the 31st ranked run-blocking line and the 4th ranked pass-blocking line. Combined, the Steelers came in at 17th overall. Entering 2021, the Steelers line ranks 29th. I would say the struggles to run the ball lands on both the backs in Pittsburgh and the inability of the offensive line.

Harris likely struggles carrying the football in his rookie season as the offensive line is a legitimate concern. The efficiency numbers in Pittsburgh may not be great, but I believe he’ll makeup for it in volume. I believe Najee Harris is going to come in and command a true workhorse role from day one.

With a the possibility to see 300+ touches in year one, I have Harris with the potentail to finish as a back-end RB1 in his rookie season. I believe he could see upwards of 80+ targets as a rookie. QB Ben Roethlisberger attempted 41.9 passes a game a season ago (2nd most) with an average depth of target of 6.2 yards (worst in the league). With Ben nowhere near what he once was, this plays right into a huge target share for the rookie RB.

Najee Harris is a very intriguing prospect that will be a workhorse, barring injury, for the Steelers. He should be the top ranked back in his class as he is likely the only one to step into this type of role. His ability to play all three downs is huge for a team that has been know to pick one back and ride him.

I currently have Najee ranked 36th, and he is my 15th ranked RB in my 1QB start-up PPR rankings. The RotoHeat consensus rankings has him at 22, fourteen spots higher than me. The DLF ADP of 21 is far too early for my tastes and the rank of RB13 aligns with my rankings. I have no issue with his ability to deliver a high-end RB2 season, I am just not willing to grab him that early in the second round.

When looking past 2021, the Steelers as an offense are one large question mark. Will they improve the offensive line? Who will be the QB after the team moves on from Roethlisberger? Will Juju Smith-Shuster re-sign next year like he did this year? Sooner or later the Steelers need to rebuild, and in 2022 that very well could be the reality. As a result, Harris will likely remain a high-volume, low-productivity style of fantasy RB for the foreseeable future.

If you missed out on Harris in your rookie drafts and wish to buy him, you likely will need to overpay to make it happen. Harris quite likely was the 1.01 in your rookie drafts so you are likely looking at a price tag of the top overall pick plus to acquire him. He is a tough player to buy and one that I will be avoiding due to what I believe is a bloated price tag. I love the player but cannot justify the asking price.