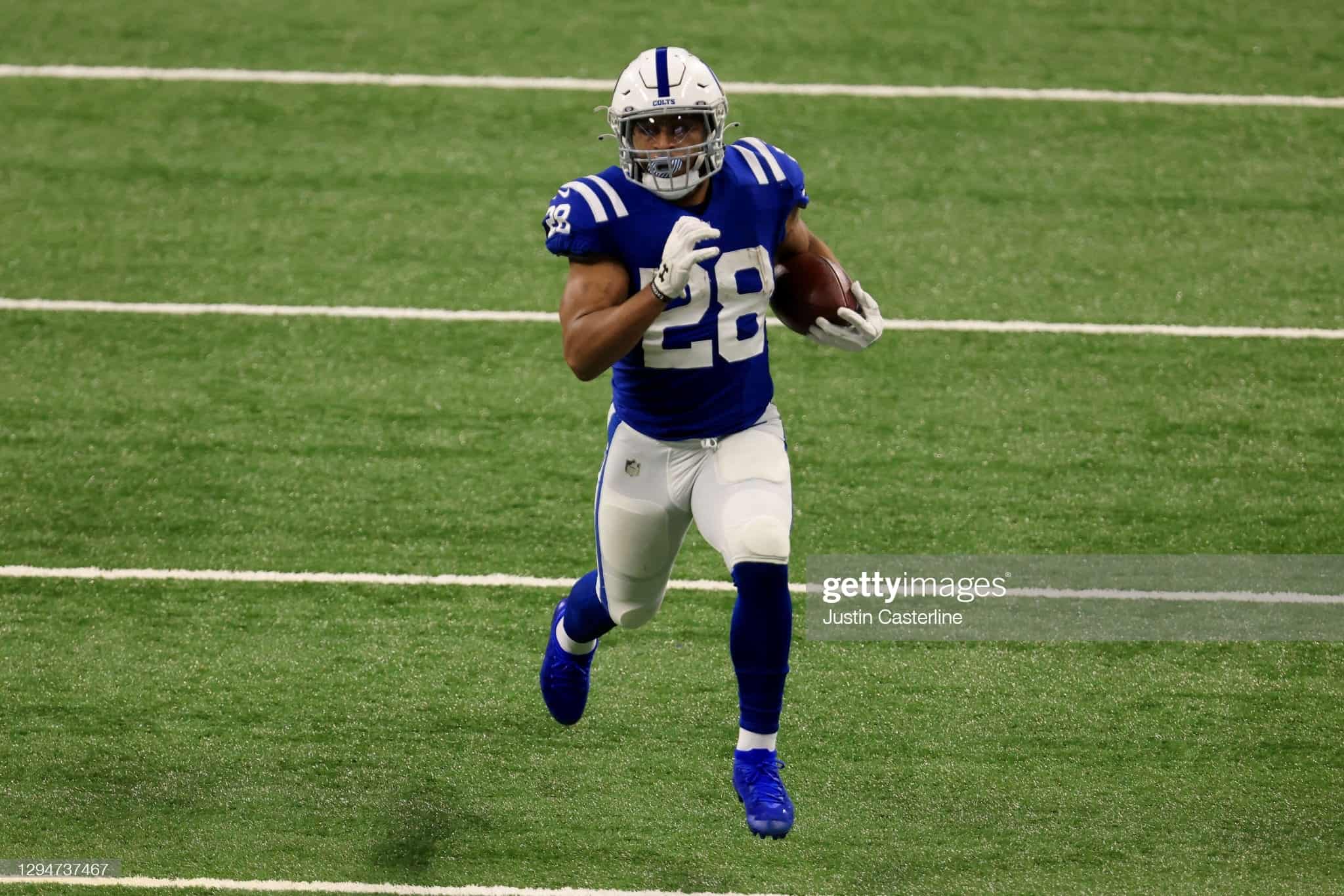 The Top 50 Series continues with the profile of Indianapolis Colts’ RB Jonathan Taylor.

Wisconsin RB Jonathan Taylor was selected by the Indianapolis Colts in the second round (41st overall) in the 2020 NFL Draft. With the pick, the Colts made Taylor the 3rd running back selected after Clyde Edwards-Helaire went to Kansas City, and Detroit selected D’Andre Swift.

Taylor spent three seasons at Wisconsin, appearing in 41 games for the Badgers. In those 41 games, he totaled 6,174 rushing yards and scored 50 touchdowns on 926 carries. In addition to his work on the ground, Taylor added 407 yards and five more touchdowns on 42 receptions.

His best season came in 2019. In 14 games he put up 2,255 scrimmage yards and scored 26 touchdowns on 346 touches. Jonathan Taylor finished 23 yards shy of 2,000 rushing yards in his freshman season. He followed that season with 2,194 yards as a sophomore and another 2,003 in his junior season. In his final two seasons, Taylor was named a unanimous first-team All-American, first-team All-Big Ten, and the Big Ten Running Back of the Year. He was the Doak Walker Award winner, which honors the top running back in college football, in both those seasons as well.

Taylor joined the Colts in his rookie season and entered a crowed running back room. In addition to Taylor, the Colts’ depth chart listed Marlon Mack, Nyheim Hines and Jordan Wilkins. In a year without an offseason program or a preseason, it was difficult to project how much time Taylor would get in his rookie season.

The running back room thinned somewhat in Week 1 when Marlon Mack was lost for the season due to an Achilles tendon tear. During the Week 1 loss to Jacksonville, the Colts split their backfield carries. Taylor had 9, Mack had 4, Hines had 7, and Wilkins didn’t have a carry. The path to a significant workload for the rookie seemed clear.

Taylor has his first 20+ carry, 100 yard rushing game, and touchdown of his career in Week 2. Taylor was RB14 on the week with 19 PPR points. From Week 3 though to Week 12 (which Taylor missed on Covid-IR), he was RB19 averaging 12.3 points per game. Taylor was widely considered a disappointment fantasy wise.

He returned off the Covid list in Week 13, and averaged 130 yards rushing and 1.4 touchdowns a game the remainder of the season. He was the No.1 scoring RB in that span and averaged 26.1 points a game. Taylor finished his rookie season as RB6. Taylor in the span of five weeks went from bust to league winner.

Entering the 2021, season it’s clear that Jonathan Taylor is the Colts primary running back. Nyheim Hines and Jordan Wilkins will be involved and Marlon Mack will attempt to muddy the waters with his return from injury. Regardless of all the names on the depth chart, Taylor will be the man. In addition to Taylor solidifying himself as the clear No.1, he also has an upgrade at QB in Carson Wentz.

My concern for Taylor is his monstrous finish to his rookie season, as it came against Houston (twice), Las Vegas, Pittsburgh and Jacksonville–not exactly a murderers row of tough run defenses. My concerns, however, are not enough to fade this talented back.

I do expect Wentz to improve the offense and get a full season (hopefully) from Michael Pittman and Parris Campbell. This should lead to longer drives and more scoring opportunities. Taylor looks like a back to build your dynasty team around and a back that will be a top-5 back in 2021 and beyond barring injury.

I currently have Taylor ranked 4th overall, and he is my 4th ranked RB in my 1QB start-up PPR rankings. The RotoHeat consensus rankings has Taylor ranked at 3. My ranking is the lowest on our team. The DLF consensus ADP of 2 is a little high for me based on the sample size from Taylor and my concerns that he simply beat up on a subpar defenses.

The DLF consensus ranking of RB2 is high for me as well. I would not be comfortable selecting Taylor ahead of Dalvin Cook or Saquon Barkley. I am high on Taylor clearly, as he is RB4, and I see him as a back that will maintain this ADP or increase it in the seasons to come.