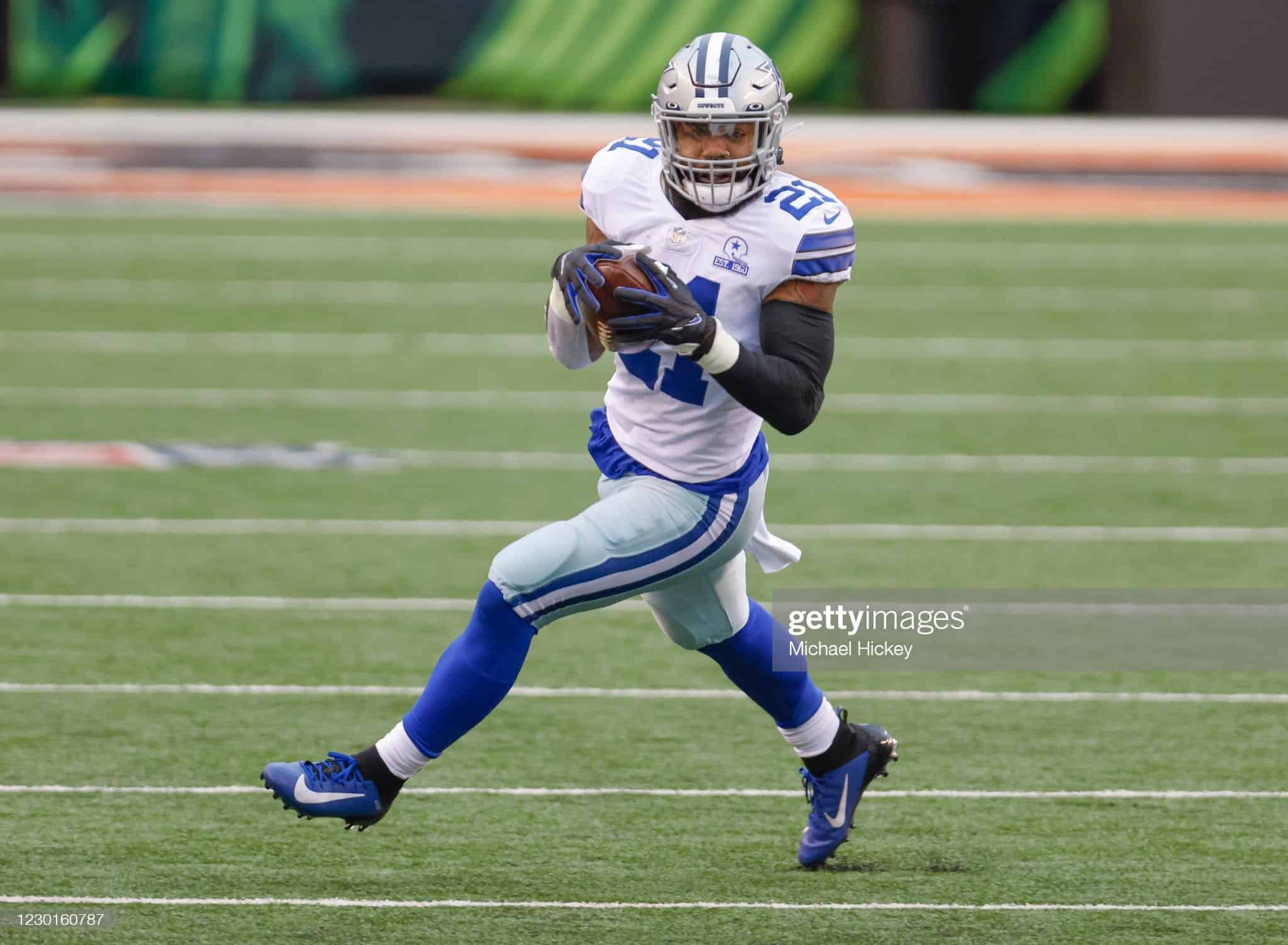 The Top 50 Series continues with the profile of Dallas Cowboys’ RB Ezekiel Elliott.

Ohio State RB Ezekiel Elliott was selected by the Dallas Cowboys in the 1st round (4th overall) in the 2016 NFL Draft. With the pick, the Cowboys made Elliott the 1st running back selected and the only back selected in the first round.

Ezekiel Elliott spent three years at Ohio State, appearing in 35 games for the Buckeyes. In those 35 games, he totaled 3,961 yards on 592 carries, and he scored 43 touchdowns. In addition to his rushing totals, Elliott added 58 receptions for 449 yards and 1 touchdown. His best season came in his junior season in 2015. Zeke rushed for 1,881 and caught another 206 yards while scoring 23 times on 316 touches. His twelve 100-yard rushing games in the 2015 season tied Eddie George for the Ohio State school record.

Elliott was named the Cowboys’ starting running back going into his rookie season season, ahead of veterans Alfred Morris and Darren McFadden. He finished the 2016 season with 1,994 scrimmage yards and 16 touchdowns on 354 touches. He finished as the NFL’s leading rusher with 1,631 yards (the third most by a rookie behind Eric Dickerson’s 1,808 in 1983 and George Rogers’ 1,674 in 1981), and the youngest player to reach 1,600 yards. His 15 rushing touchdowns set a Cowboys rookie record, and Zeke finished as the RB3 with 325.4 PPR points in 15 games.

Prior to his sophomore season, Elliott was suspended or the first six games for violating the personal conduct policy. The NFL conducted a year-long investigation into the allegations, and though Elliott was never criminally charged, they decided to suspend him. Zeke appealed on numerous occasions, and after all was said and done, his season was limited to 10 games. He finished with 1,252 scrimmage yards and 9 scores on 268 touches. Despite missing six games, Elliott finished as RB12. His 20.3 PPR points/game were 3rd best.

Elliott, along with the majority of the Cowboys’ offense, slumped after the Week 5 injury to QB Dak Prescott. In the 5 games with Prescott in the lineup, Elliott was RB3, averaging 22.3 PPR points a game. In his other 10 games, Zeke was RB24 and his average plummeted to 11.2 points/game.

In addition to the loss of Prescott, Elliott’s offensive line was a mess in terms of health, and Zeke struggled with ball security, fumbling a career high 6 times (losing 5). Zeke had his first season with less than 1,000 yards rushing since his suspension-shortened 2017 campaign. He finished 2020 as RB9 with 223.7 points.

With Dak Prescott back under center and the offensive line healthy, Zeke should once again be a reliable high preforming fantasy asset. Dallas’ offensive line was ranked 27th in the league by Pro Football Focus last year. It should be better in 2021 with Zach Martin, Tyron Smith and La’el Collins back in the fold. PFF currently has the Cowboys line ranked 7th.

By being faded into obscurity over the back half of the season in 2020, Zeke left a bad taste in dynasty managers’ mouths and his ADP has slid as a result. This time a year ago, Elliot had a startup ADP of 5th overall, and he now currently sits at 20th as one of the biggest value adds in start-ups this season.

Zeke has averaged 330 touches a season with 2017 and 2020 as the only two years in which he has fallen under 300. He will be 26 entering 2022 and likely coming in off yet another 300+ touch season. Eventually those touches are going to take their toll on Zeke. Entering the 2022 season is where I would be looking to get out and sell Elliott.

Ezekiel Elliott is no longer a top-3 RB in dynasty, and he certainly isn’t the RB24 he played to in 2020 without Dak behind an injury depleted offensive line. The reality is he likely falls somewhere in between.

I currently have Zeke ranked 20th, and he is my 10th ranked RB in my 1QB start-up PPR rankings. The RotoHeat consensus rankings matches my ranking of 20th. The DLF ADP of 20 aligns with my ranking as well, and their rank of RB12 is a little late, but nothing outrageous. I believe in Zeke this season and in redraft I would take him as a top-5 back.

If you have yet to complete your rookie draft and are looking to buy Ezekiel Elliott with your draft picks, It should cost you a mid first round pick in 1QB formats and a pick in the 1.07-1.10 range in Superflex leagues.