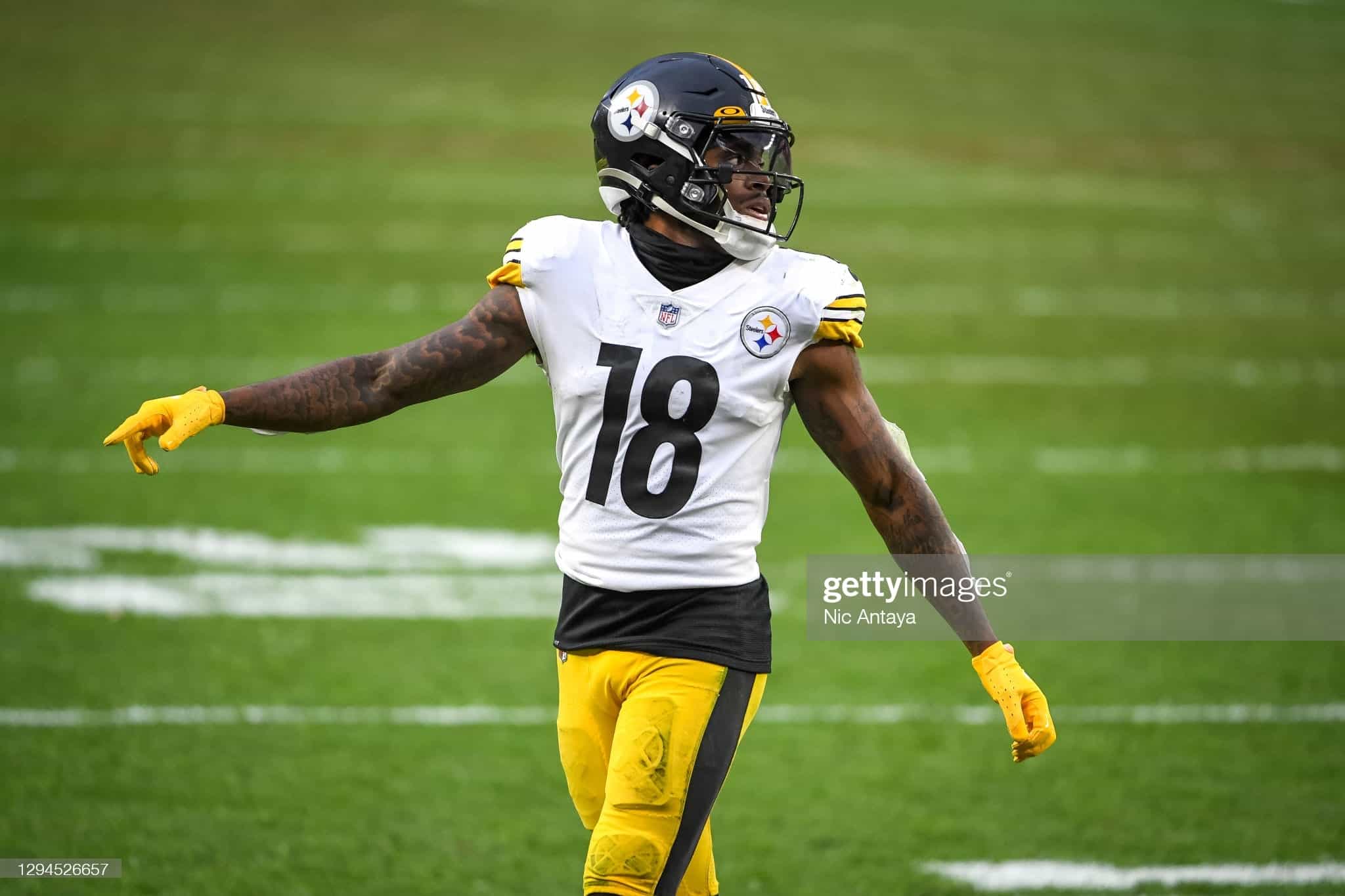 The Top 50 Series profiles individuals currently occupying a spot in the top-50 2021 Startup Dynasty ADP over on DLF. In Dynasty, there are certain players that tend to hold more uncertainty or are more divisive than others. The Top 50 Series takes a deep dive into the player’s career performance to date as well as his dynasty outlook for 2021 and beyond. We continue the Top 50 Series with Pittsburgh Steelers’ WR Diontae Johnson.

Toledo WR Diontae Johnson was selected by the Pittsburgh Steelers with the 66th overall selection of the 2019 NFL Draft. With the pick, the Steelers made Johnson the tenth wide receiver selected in 2018. The pick used to grab Johnson was obtained from the Oakland Raiders in the Antonio Brown trade.

Johnson spent three seasons at Toledo appearing in a total of 38 games. In his 38 games as a Rocket, Johnson totaled 135 receptions for 2,235 yards and scored 23 touchdowns. His best season came in his 2017 sophomore campaign where he posted 74 grabs for 1,278 yards and scored 13 times.

Johnson has spent two seasons as a Steeler. In his rookie season, Diontae appeared in all 16 games, starting 12 of them. His 92 targets, 59 receptions, and 5 touchdowns led the team. His 680 receiving yards were second only to James Washington. Johnson finished as WR39 and looked to be a wide receiver on the rise.

In 2020, with QB Ben Roethlisberger back under center for Pittsburgh, Johnson was touted as a breakout candidate. Breakout is exactly what DJ did last season. He finished the season with a team high 144 targets and was WR21 at season’s end with 221.8 PPR points. Johnson struggled in his second season with his hands with a league high 16 drops. The drops led to his benching in Week 13 versus the Buffalo Bills.

When looking back on Johnson’s first two seasons in the league, one has to be impressed. Johnson, as mentioned, finished as WR39 in his rookie season with the combination of Mason Rudolph and Delvin Hodges as his QB. In 2020, he improved to WR21 with a less than 100% Ben Roethlisberger under center. What makes his 2020 season even more impressive is he finished as WR21 in the equivalent of 13 games. He was injured early in Week 5, missed Week 6, and as mentioned was benched in Week 13.

The drops are likely baked into this ADP of 49. He will improve, I am confident of that, and 2021 should be his best season to date. As we move beyond 2021, its very likely that Juju Smith-Shuster is playing elsewhere and that Johnson and teammate Chase Claypool will lead the Steelers’ receiving core. His future beyond 2021 is bright, even though his QB of the future is unknown.

Johnson has all the tools to deliver a top-12 season in 2021 and continue that level of production for years to come. If the Steelers can sort out their offensive line woes and solidify the QB position, Johnson very well may continue the Steelers tradition of having a top performing fantasy WR on the roster.

I currently have him ranked 56th, and he is my 27th ranked WR in my 1QB start-up PPR rankings. The RotoHeat consensus rankings have Johnson at 56th overall.

The DLF ADP of 49th is about right, and Johnson is likely a candidate to move up in my rankings. I do feel that Diontae is a “buy” at his current acquisition cost even though I have him ranked lower than his current ADP. If you have yet to complete your rookie draft and are looking to trade some picks for Diontae Johnson, I would be willing to move any pick from 1.06 down in 1QB, and pick 1.10 down in a Super-flex league.