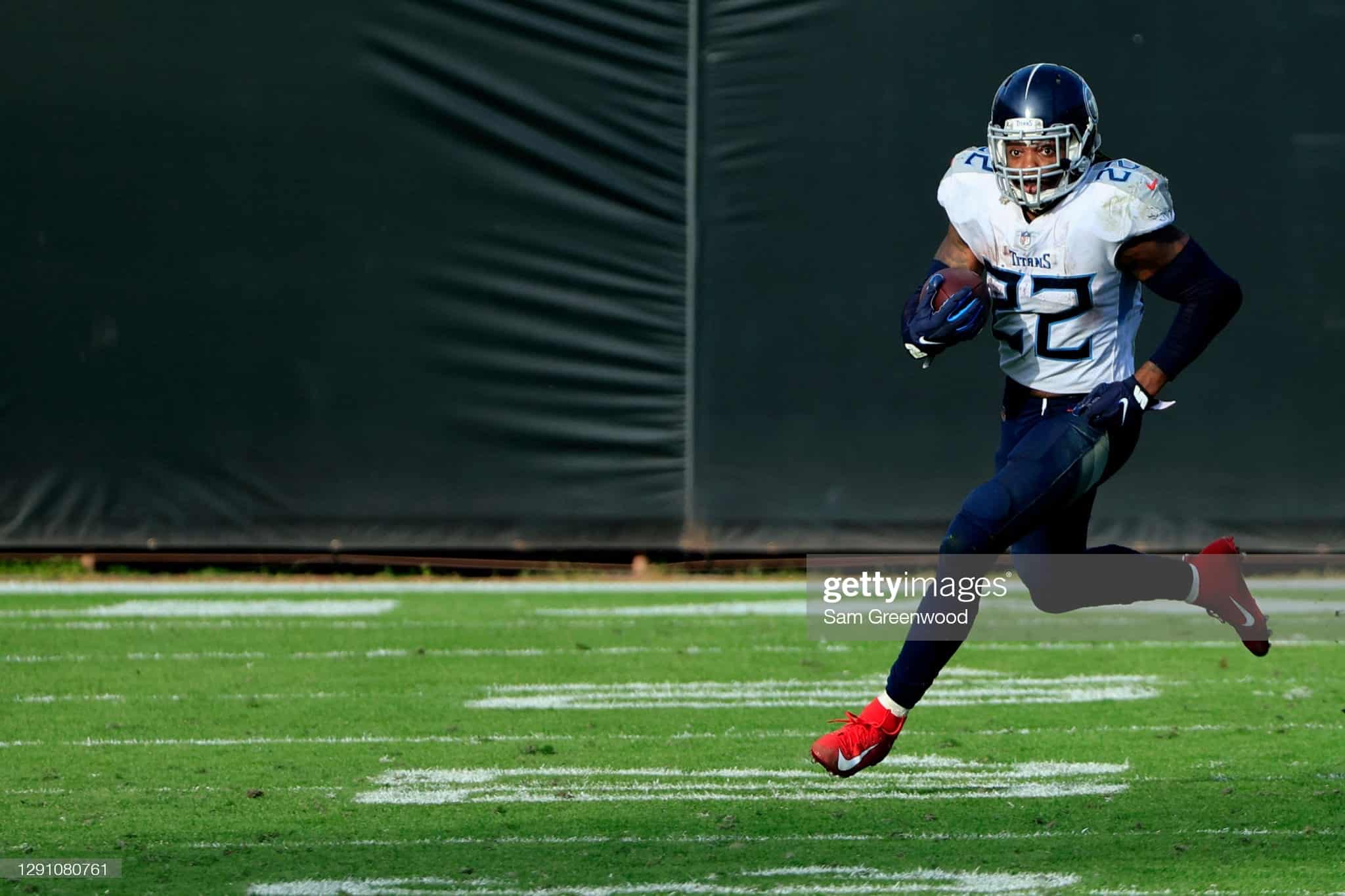 The Top 50 Series continues with the profile of Tennessee Titans RB Derrick Henry.

Alabama RB Derrick Henry was selected by the Tennessee Titans in the second round (45th overall) in the 2016 NFL Draft. With the pick, the Titans made Henry the 2nd running back selected in the draft. Ohio State RB Ezekiel Elliott was the first back selected at fourth overall by the Dallas Cowboys.

Derrick Henry spent three seasons at Alabama, and in those three seasons he playing in 39 games for the Crimson Tide. Over the course of those 39 games, Henry totaled 3,591 yards on 602 carries and he scored 42 touchdowns. In addition to his work on the ground, Henry caught 17 passes for 285 yards and scored another three times. Henry had his best collegiate season in 2015. He finished his junior season with 2,310 scrimmage yards and scored 28 touchdowns on 406 touches.

During the 2016 season, Derrick Henry shared the Titans backfield with DeMarco Murray. During the offseason, the Titans traded for the former Cowboy and Eagle and they did so with the intent of making Murray their primary ball carrier. Murray out touched Henry 346 – 123 in 2016. Murray was RB5 and Henry was RB44 with 105.5 PPR points. After being drafted in the first round of rookie drafts everywhere, Henry’s rookie season was a disappointment.

Henry and Murray continued to share work in 2017, but the workload was certainly more even this season with Murray seeing 223 touches and Henry 187. On eight less carries, Henry ran for 85 more yards than Murray and appeared to be the better back for the majority of the season. Henry concluded his second season with 744 rushing yards and 5 scores on 176 carries and added 136 more yards and a touchdown off of his 11 receptions. Henry was RB37 with 135 PPR points in his sophomore season. Two seasons into his career, Derrick Henry averaged 120.4 points and a RB41 finish.

2018 was looking like the season in which Derrick Henry would finally start delivering some return on those that invested in him during their 2016 rookie drafts. DeMarco Murray was gone and the backfield belonged to Henry. The Titans hired Matt LaFleur (Offensive Coordinator), and his offense often features a RB catching passes. Catching the football not being Henry’s strong suit led to the Titans adding free agent and former New England Patriots RB Dion Lewis. At worst it appeared that Henry would dominate ground touches and Lewis would be the third-down/passing catching back.

Derrick Henry is a beast of a running back, and one of the premier backs in the NFL. With that said I have plenty of concerns entering 2021. He’s had at least 380 carries in each of the last two seasons, including the postseason, even if we haven’t seen it thus far its fair to wonder if he’ll break down at some point. The biggest red flag for me is what happened to the other seven members of the 2000+ the season after accomplishing that rare feat.

The other seven members of the 2000 club are – Eric Dickerson, Adrian Peterson, Jamaal Lewis, Barry Sanders, Terrell Davis, Chris Johnson, and O.J. Simpson. When looking at these seven individuals the follow season, the drop off is remarkable.

All members of this group saw a decline in rushing yards of at least 38% the following season. Their yards per carry all drop significantly, and their total touches, other than Sanders, all declined. If that wasn’t enough, five of the seven missed time the season directly after their 2,000 yard season. Historically speaking, Derrick Henry should see his touches decline, his productivity decline, and he likely misses some time in 2021.

In addition to the fear that Henry follows in the footsteps of his fellow 2000 club members is the addition of WR Julio Jones, and the change at Offensive Coordinator. Titans TE coach Todd Downing has been promoted and he is tasked with leading an offense that finished 4th in points scored, 2nd in rushing and saw Tannehill have yet another impressive season. Early indications would seem to indicate that the Titans will remain run heavy, but with a higher percentage of plays being passes in 2021. No matter what you hear out of Titans camp, Derrick Henry is unlikely to see his passing game workload increase.

Looking past the 2021 season, Henry will be a 28 year-old running back, with a no guaranteed money on his contact and a very manageable $6,000,000 dead cap hit. I am not suggesting that the Titans will release Henry, but the possibility is certainly there. I get that we see Derrick Henry as a unicorn, as a back that just isn’t like all the others. I will caution all those that see him in that light, as I am certain the consensus viewed the other 7 members of the 2000 in a similar fashion.

I currently have Derrick Henry ranked ranked 23rd, and he is my 13th ranked RB in my 1QB start-up PPR rankings. The RotoHeat consensus rankings has him higher than I do at 16. The DLF ADP of 15 is in my opinion quite risky. Henry is a back that I prefer to pass on in startups but I will consider it in the back of the second round. I am aware that I won’t have any shares of Derrick Henry drafting this way and I am perfectly fine with it.

If I am looking for a Titans RB, I will likely target Darrynton Evans who has a current ADP of 189th and RB59. The acquisition cost combined with the potentail upside is worthy of the dart throw in the 15th round.

If you currently roster Derrick Henry and are a contender, I would absolutely hold him this season. The possibility that Henry has another top-5 season is definitely within his range of outcomes. If you are not a contender you need to sell and you need to sell sooner rather than alter. Henry currently holds a considerable amount of value as he should. Trading him away does not mean giving him away. The King is worthy of a top-2 rookie draft pick in 1QB formats at minimum. If you are looking to bring a player back versus a pick, Henry should be able to net you a player like Najee Harris, Antonio Gibson, or J.K. Dobbins. In addition to those running backs you should be able to add a low pick as well.