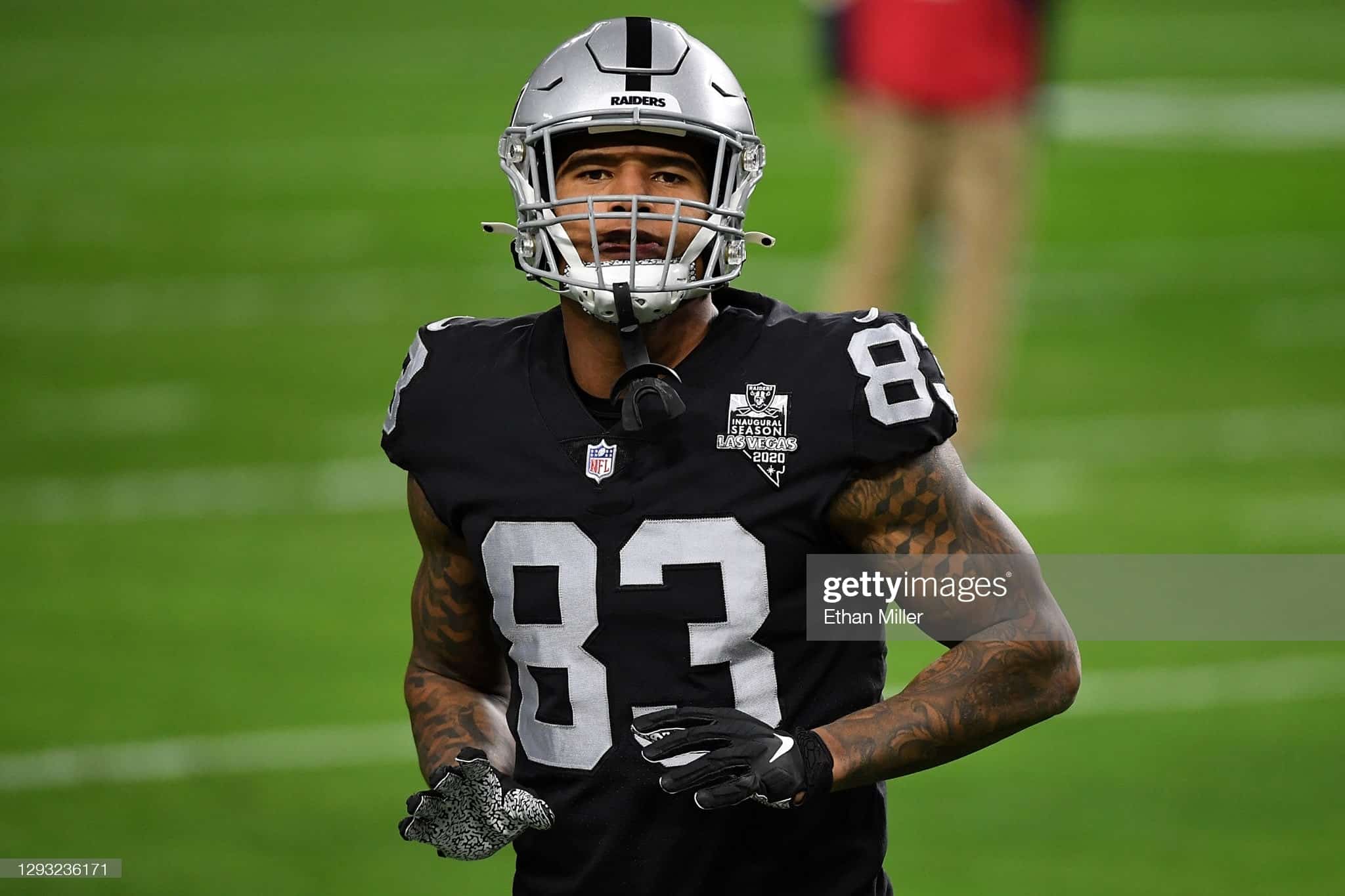 The Top 50 Series profiles individuals currently occupying a spot in the top-50 2021 Startup Dynasty ADP over on DLF. In Dynasty, there are certain players that tend to hold more uncertainty or are more divisive than others. The Top 50 Series takes a deep dive into the player’s career performance to date as well as his dynasty outlook for 2021 and beyond. We continue the Top 50 Series with Las Vegas Raiders’ TE Darren Waller

Georgia Tech WR Darren Waller was selected by the Baltimore Ravens with pick 204 in the 6th round of the 2015 NFL Draft. Waller, who played wide receiver in college, was drafted by the Ravens to play Tight End.

Darren Waller spent three years at Georgia Tech. In those three seasons, Waller appeared in 33 games, totaling 51 receptions for 971 yards and he scored 9 touchdowns. His best season came in 2014, as he hauled in 26 passes, for 442 yards and 6 touchdowns. Although these stats don’t jump off the screen at you, running a 4.46 second 40-yard dash and having a 37-inch vertical at his size certainly does.

In two seasons with the Ravens, Waller appeared in 18 games. He saw a total of 23 targets that he turned into 12 catches, 103 yards and 2 touchdowns. Talent was never the issue for Darren Waller while in Baltimore. He was injured in 2015 and spent the majority of the season on Injured Reserve. In addition to injury, Waller struggled with substance abuse. He was suspended for the first four games of the 2016 season, and in June of 2017, he was suspended for the entire season. After being reinstated by the NFL in 2018, the Ravens waived Waller and signed him to the Practice Squad upon clearing waivers.

In November of 2018, the Oakland Raiders signed Waller off the Ravens Practice Squad and his career in the Silver and Black began. Waller played in four games for Oakland that season and caught 4 passes for 75 yards. If you didn’t know who Darren Waller was in 2018, don’t feel bad. You were not alone.

During Week 1 of the 2019 season against Denver, Waller caught seven passes for 70 yards. In Week 3 versus Minnesota, Waller finished with 134 receiving yards on 13 receptions, marking his first career game with over 100 yards. Waller continued this scorching pace all season, and all of a sudden Darren Waller is one of the best TEs in football. He finished the 2019 season with 90 receptions, 1,145 yards and three touchdowns. Waller was TE3 with 221 PPR points. Everyone knows who Darren Waller is now.

Last season, I had Waller pegged for regression and I wasn’t wrong, except it was positive regression–not exactly what I had in mind. Waller saw 145 targets in 2020, tied with Kansas City TE Travis Kelce for the league lead. Waller snagged 107 of those targets for 1,196 yards and he scored 9 touchdowns, finishing as the TE2 with 278.6 PPR points. In two short seasons, Waller went from a player most people hadn’t heard of to becoming a fixture in the top-4 at his position.

The Las Vegas Raiders have had an interesting offseason. They overhauled their offensive line mainly for salary cap reasons and made it worse. The elected to move on from Nelson Agholor and replace him with John Brown and they signed Willie Snead. What hasn’t changed is the fact that Darren Waller is the top receiver on this team, and barring injury he will lead the team once again in targets. He averaged 9.1 targets a game, and in 2021 I would expect that number to be about the same. With an extra game on the schedule, it is possible that Waller will see over 150 targets.

If this was a redraft article I would be banging the table for you all to take Waller as your TE2. In dynasty, however, I have some concerns past this season. The Raiders are going to move on from Derek Carr, possibly as soon as this season. I am one of the few that still believes in Henry Ruggs as well. Darren Waller will remain a top 6-8 TE for years, about that I have little doubt, but I feel 2021 is his last year as a sure fire top-3 option at TE.

I currently have Waller ranked 63rd, and he is my 4th ranked TE in my 1QB start-up PPR rankings. The RotoHeat consensus rankings have Waller at 50th overall, and I am responsible for him being there as I am the lowest on the team on him.

The DLF ADP of 41st is high in my opinion. I have Waller much lower simply because of my perceived long term productivity for him. I choose not to pay up for a player I have concerns about, especially when they are a TE. I rank how I draft, and I wouldn’t look at Waller until the 5th round at the earliest. If you have yet to complete your rookie draft and are looking to move Waller for some draft picks, I would be willing to move him for a late first round selection in the 1.10-1.12 range.