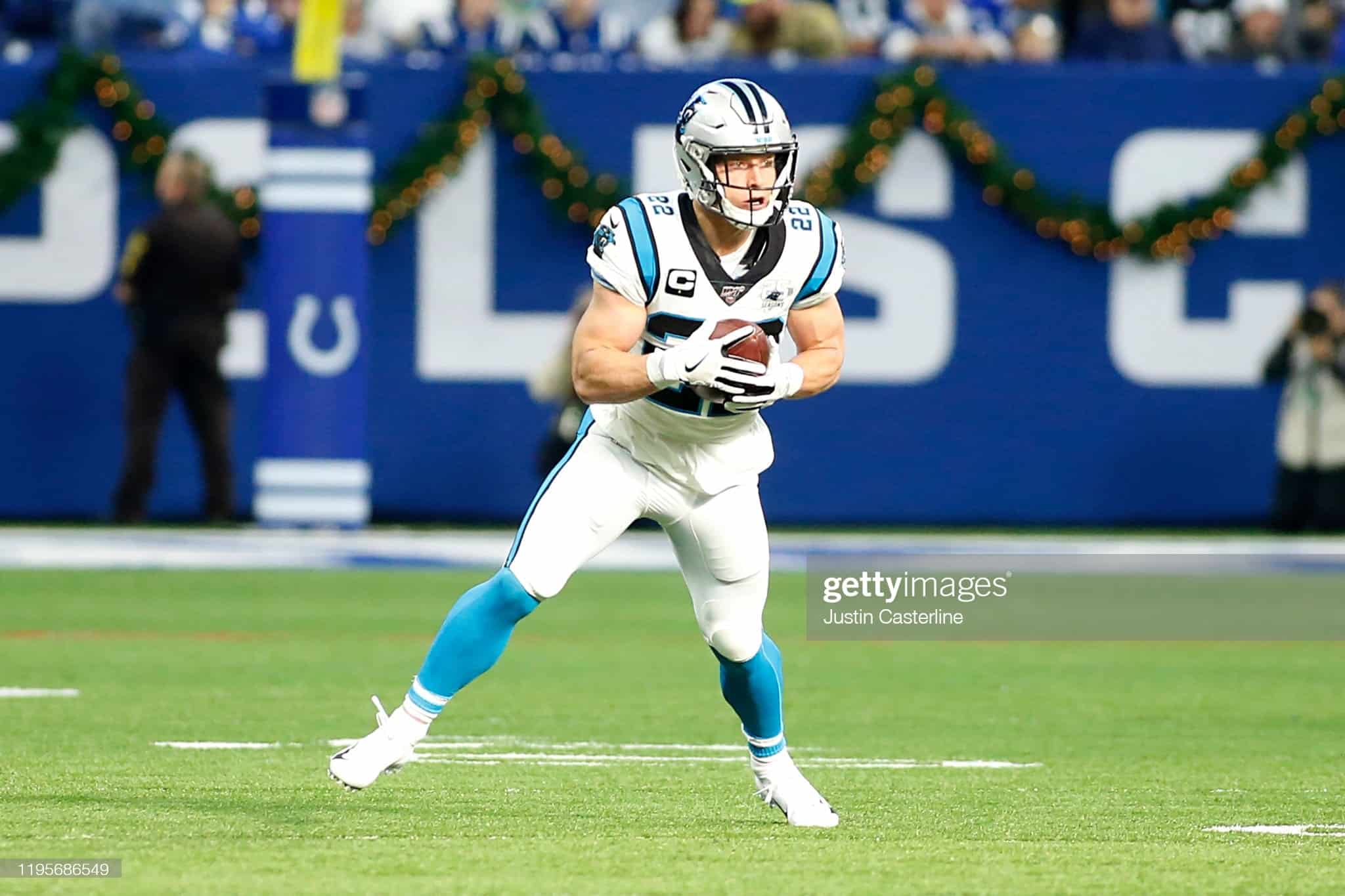 The Top 50 Series profiled individuals currently occupying a spot in the top-50 2021 Startup Dynasty ADP over on DLF. In Dynasty, there are certain players that tend to hold more uncertainty or are more divisive than others. The Top 50 Series takes a deep dive into the player’s career performance to date as well as his dynasty outlook for 2021 and beyond.

Stanford RB Christian McCaffrey was selected by the Carolina Panthers in the first round (8th overall) in the 2017 NFL Draft. With the selection, the Panthers made McCaffery the second back to be drafted after the Jacksonville Jaguars grabbed LSU RB Leonard Fournette fourth overall.

CMC finished second in the nation that season with 2,019 yards and became the first Stanford back to record 2,000 yards in a season. He added in 1,070 kick return yards and his 3,864 all purpose yards and crushed Barry Sanders’ NCAA record of 3,250 yards. He also set numerous other Stanford records during the season including rushing yards in a single game (243) and all-purpose yards in a game (461). McCaffrey was a consensus All-American and was the Associated Press College Football Player of the Year, Pac-12 Player of the Year, and Paul Hornung Award winner. He also finished second to Alabama’s Derrick Henry in the 2015 Heisman Trophy voting.

CMC entered his rookie season in a shared backfield with RB Jonathan Stewart and QB Cam Newton. In his first season, McCaffrey had 117 carries compared to 198 for Stewart and 139 for Newton. Where McCaffery earned his fantasy value, especially in PPR scoring leagues, was the passing game. He saw 113 targets that he turned into 80 receptions and 5 touchdowns. His 80 receptions broke the Panthers rookie record of 74 set by Kelvin Benjamin in 2014, and are second most all-time for a rookie RB, one behind New Orleans’ RB Alvin Kamara. CMC finished his rookie season as RB10 with 228.6 PPR points in 16 games.

In his sophomore season, McCaffrey established himself as the main Panthers running back as the team released Jonathon Stewart. Questions surrounded CMC as there were concerns if he would be able to handle an increased workload. Handle it he did, as he recorded his first 1,000 yard rushing season, finishing with 1,098 yards and 7 touchdowns on 219 carries. His work in the passing game increased as well, as CMC as pulled in 107 of his 124 targets for 867 yards and six additional touchdowns. He finished the 2018 season as RB2 overall with 385.5 PPR points, .3 points behind RB1 Saquon Barkley.

The 2019 season was a magical season for McCaffrey and his fantasy managers. CMC finished atop the RBs with 471.2 points, a whopping 156.4 points ahead of RB2 Aaron Jones. Aaron Jones averaged a very respectful 19.7 points per game in 2019. For context, for Jones to have caught McCaffrey he would have needed an additional 8 games! McCaffrey’s 471.2 PPR points are the second most recorded all-time, behind LaDainian Tomlinson’s 481.1 point 2006 season. His 29.5 point per game average was tops among all skill positional players, 1.4 points per game more than league MVP, Lamar Jackson.

He became only the third RB in league history to record 1,000 rushing yards and 1,000 receiving yards in the same season. CMC ran for 1,387 yards and 15 scores in 2019, and added 1,005 receiving yards and 4 more scores through the air. Rushing alone, CMC would have finished as RB13, and receiving alone WR11. CMC was a top-24 RB and a top-12 WR all wrapped into one awesome fantasy asset.

In 2020, CMC battled injury for the first time in his career. He appeared in only three games–Weeks 1, 2 and 9. In those three games, he scored 28.4, 24.8, and 37.1 PPR points. He was so productive that at the end of Week 9, CMC was RB26 in scoring with 90.3 points (30.1 points per game) in only 3 games played. CMC was the run away top pick in 1QB startup drafts of all formats in 2020–clearly his three game season disappointed, but the beauty of dynasty formats is there is always next year.

Entering the 2021 season, it is certainly possible that Carolina decides to reduce his workload to keep McCaffrey healthy. It has been reported this offseason that CMC reworked his training regimen to be less aggressive and give himself more opportunity for rest. Hopefully, with a less aggressive training approach and a strong offseason, McCaffrey will be healthy for 2021 and able to play a full slate of games as one of the best running backs in the NFL.

If McCaffrey is able to appear in all 17 games this season for the Panthers, I see no reason at all that he is not the RB1 at season’s end. After all, this is a RB that has scored 20+ PPR points in 25 of his last 29 games played, and he is one of three running backs in their first four seasons with at least 3,000 rushing yards and 2,500 receiving yards. Alvin Kamara and Roger Craig are the other two. Kamara played in 60 games, Craig 64, and CMC 51 in their first four seasons.

I do expect Carolina to scale back his touches, and it’s likely a contributing factor as to why they drafted RB Chuba Hubbard in round four of the draft. In 2019, CMC had 403 touches, and in 2020 in his three games he was on pace for 390. The Curse of 400 Touches is real and should not be dismissed. Even with a scaled back workload in the range of 350 touches, he still has the ability to be the top RB in fantasy for the next two or three seasons, barring injury.

I currently have Christian McCaffrey ranked 1st overall, and he is clearly my 1st ranked RB as a result in my 1QB start-up PPR rankings. The RotoHeat consensus rankings has him ranked at 1 as well. The DLF consensus ADP of 1 aligns with where the RotoHeat consensus and my ranks fall. The DLF consensus ranking of RB1 does as well. I know that McCaffrey missed a lot of time in 2020, but I have no concerns at all that he is the top ranked back in 2021 by a decent margin, barring injury.