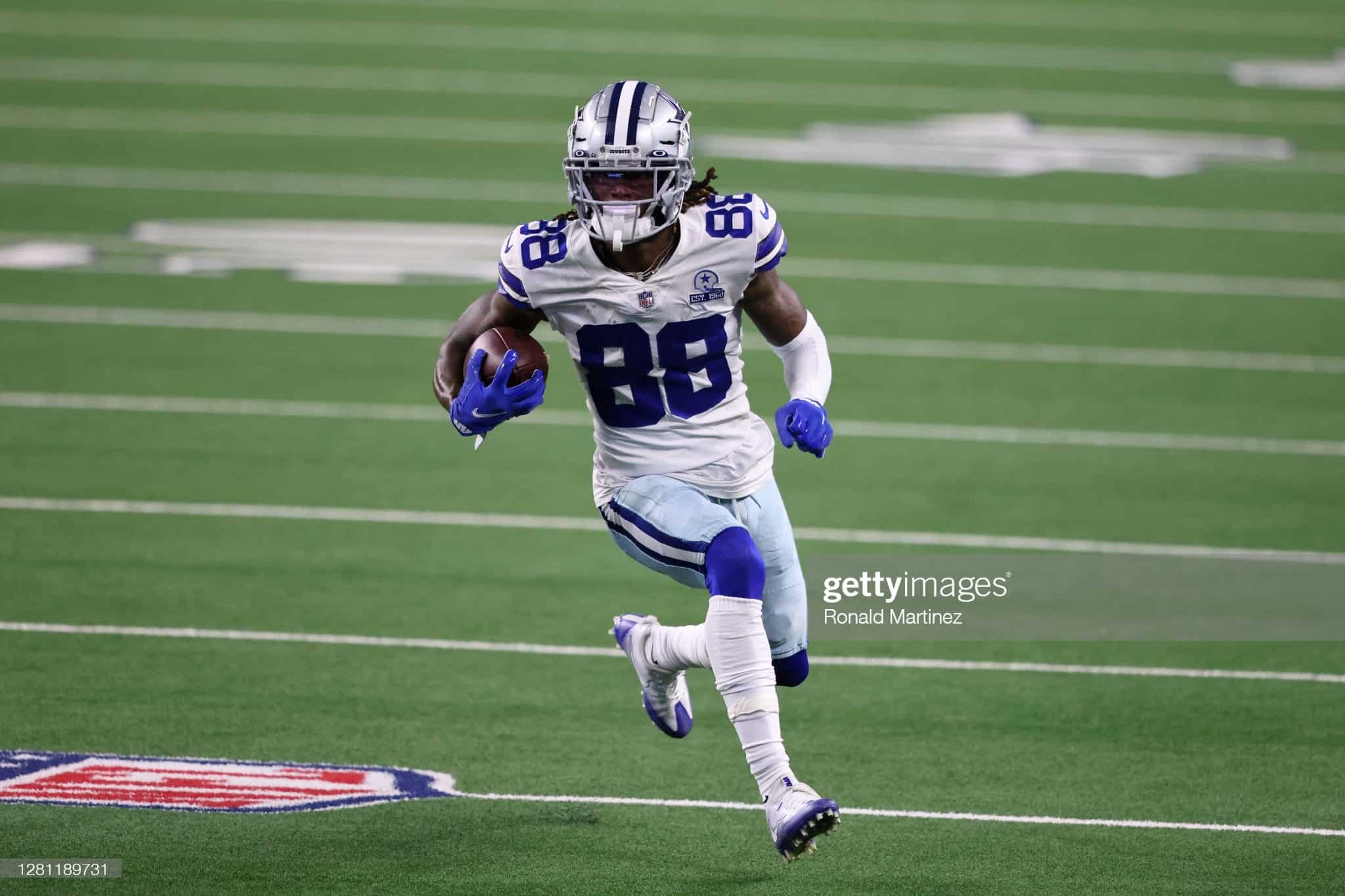 The Top 50 Series continues with the profile of Dallas Cowboys’ WR CeeDee Lamb.

Oklahoma WR CeeDee Lamb was selected by the Dallas Cowboys in the 1st round (17th overall), in the 2020 NFL Draft. With the pick, the Cowboys made Lamb the 3rd wide receiver selected after Las Vegas selected Henry Ruggs and the Denver Broncos added Jerry Jeudy.

CeeDee Lamb spent three years at Oklahoma, appearing in 40 games for the Sooners. In those 40 games, he totaled 3,292 yards on 173 receptions and he scored 32 touchdowns. His best season came during his junior season in 2019. Lamb hauled in 62 passes for 1,327 yards and found the end-zone 14 times. His 21.4 yards average per reception was the most ever in a single season by an OU player with at least 50 receptions. He was a finalist for the Biletnikoff Award and was named the Most Outstanding Player of the Big 12 Championship.

There are some WRs that never seem to get to play with a capable quarterback. CeeDee Lamb is not one of those receivers. In Oklahoma he caught passes from Baker Mayfield, Kyler Murray, and Jalen Hurts. In his rookie season in Dallas, the high level of QB he has become accustomed to continued with Dak Prescott. Last season with Dak, Lamb was the WR11, averaging 8 targets, 6 receptions and 87 yards a game. He scored twice in those 5 contests and scored 56.6 PPR points.

After the Dak season ending injury, Lamb experienced some adversity at QB position for the first time. With the combination of Andy Dalton, Ben DiNucci, and Garrett Gilbert, Lamb was the WR31 in PPR scoring and his average points per game were 3.4 points lower than his first 5 contests. By seasons end, CeeDee Lamb finished as WR20. He was the second highest scoring rookie WR behind Minnesota Vikings’ Justin Jefferson.

Lamb struggled somewhat with drops as a rookie with 9. Drops, however, can be a misleading stat. Tyreek Hill dropped 11 last season, Alvin Kamara 10, and DK Metcalf 9. I would rather my fantasy asset drop some passes than not see any targets at all. Regardless, Lamb’s rookie season was impressive. The highlight of his rookie season was his amazing touchdown catch against the Minnesota Vikings. Lamb was durable and played in all 16 games, leading to his breaking of the Cowboys’ record for receptions by a rookie.

CeeDee Lamb is tied to the Dallas Cowboys offense for the next four years, assuming the Cowboys pick up his fifth-year option. This brings us through the 2024 season before he officially becomes a free agent. Also signed through 2024 is Dak Prescott. This is music to the ears of all Lamb dynasty owners.

CeeDee Lamb is a player you can confidently build your dynasty team around. Amari Cooper’s presence on the Cowboys leads to CeeDee being labeled as the No. 2 WR in their offense, but I am not so sure we will feel this way entering 2022. CeeDee Lamb is a superstar in the making and the future for the Dallas Cowboys.

Lamb has the potential to be the WR1 in PPR-scoring leagues sometime in his career. He has the makings of an ideal dynasty prospect. He’s young, he’s extremely talented, and he’s tied to a high scoring offense with a MVP-caliber quarterback.

Clearly I love CeeDee Lamb. At times last offseason I had him ranked atop my 1QB rookie rankings, and he remained my top ranked WR throughout.

I currently have Lamb ranked 13th, and he is my 6th ranked WR in my 1QB start-up PPR rankings. The RotoHeat consensus rankings has Lamb three spots lower at 16. The DLF ADP of 19 is a little late in my opinion. If you wish to add Lamb to you dynasty roster, I believe you need to start looking at selecting him at the round one/two turn. Their rank of WR7 aligns with my rankings and highlights the value that I place on the WR position in a startup draft. Entering 2022, I believe that Lamb is a first round selection in 1QB startups.

If you have yet to complete your rookie draft and are looking to buy CeeDee Lamb with your draft picks, It should cost you a high first plus to acquire him in 1QB formats and a pick in the 1.04 plus range in Superflex leagues.