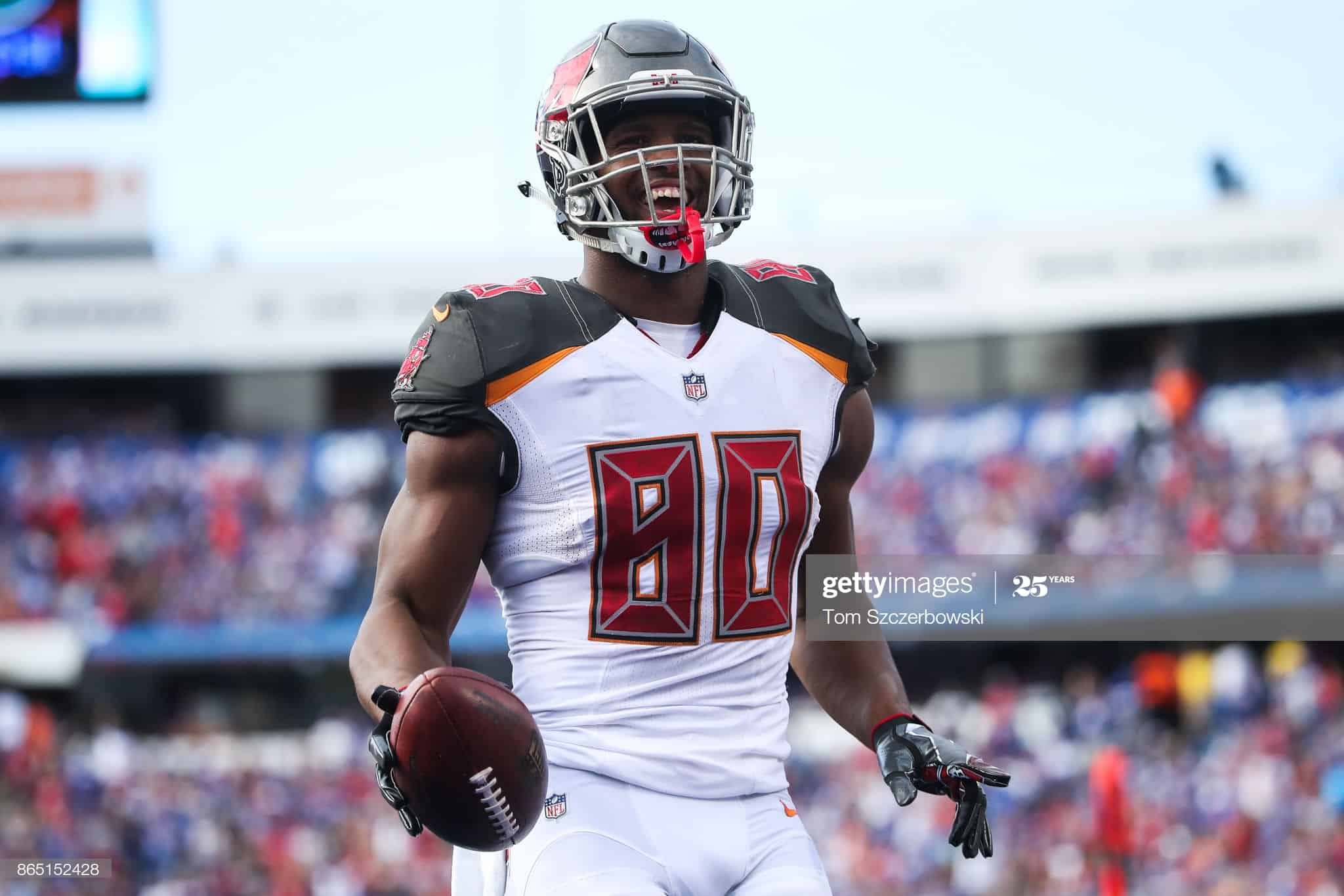 It’s time for the Tampa Bay Buccanners to set the former Alabama TE free. Perhaps I am a disgruntled O.J. Howard owner, or perhaps my failed dynasty ranking of Howard last season has led to this, but regardless of the reason, it’s time.

When I call for the Bucs to free him, I am calling for a good fantasy landing spot. After all, if you are reading this, you either play fantasy football or you are lost. So the Top 5 Fantasy Destinations for O.J. Howard seek not only a trade, but a positive trade for fantasy purposes.

On Tuesday, the Tampa Bay Buccaneers acquired the rights to former New England Patriots TE Rob Gronkowski. In the process they added to an already over-crowded TE room. According to Ourlads.com, the Bucs now list the following as their current TEs: Rob Gronkowski, O.J. Howard, Cameron Brate, Jordan Leggett, Tanner Hudson, and Anthony Auclair. That is a lot of TE’s for a Bruce Arians offense that doesn’t overly feature the position.

Howard was selected by the Buccaneers with the 19th overall pick in the 2017 NFL Draft. He caught a career-high 34 receptions for 565 yards and five touchdowns in 10 games during the 2018 season before he was injured, but caught 34 passes for 459 receptions and just one touchdown in 14 games last year. He appeared to fall out of favor with head coach Bruce Arians, and now hopefully will be playing for a different team in 2020.

Here are the Top 5 Fantasy Destinations for O.J. Howard

CHARLOTTE, NC – OCTOBER 21: A helmet of the Dallas Cowboys during their game at Bank of America Stadium on October 21, 2012 in Charlotte, North Carolina. (Photo by Streeter Lecka/Getty Images) Top 5 Fantasy Destinations for O.J. Howard

The Dallas Cowboys targeted the TE position 124 times in 2019. Jason Witten, the recipient of 83 of those targets, has departed Dallas as a free agent and joined the Las Vegas Raiders. Blake Jarwin remains and based on the contract extension that Jarwin received, he should be involved in the Cowboys offense. Also departing Dallas via free agency was WR Randall Cobb and his 83 targets. Dak Prescott had a breakout season in 2020, partially related to the comfort in the middle of the field targeting these two pass catchers.

Howard would bring that comfort for Dak as well as provide above average blocking for franchise RB Ezekiel Elliott. Dallas would be even higher on this list if I didn’t think they will add a WR via the draft, and the lackluster usage history of the TE position in a Mike McCarthy led offense.

JACKSONVILLE, FL – SEPTEMBER 29: An Indianapolis Colts helmet sits on the sidelines during a game against the Jacksonville Jaguars at EverBank Field on September 29, 2013 in Jacksonville, Florida. (Photo by Mike Ehrmann/Getty Images) Top 5 Fantasy Destinations for O.J. Howard

The Indianapolis Colts have had success with a two tight-end set in the past. The Colts have lost Eric Ebron to the Pittsburgh Steelers in free agency. While Jack Doyle is a nice piece to have, the Colts struggled mightily with injuries at the tight end and wide receiver position last season which is a reason they elected to sign veteran Philip Rivers to start over Jacoby Brissett. Rivers has shown a desire to target the TE position heavily, especially in the red zone throughout his career.

Apart from T.Y. Hilton and Doyle, the Colts’ receiving corps is nothing to write home about, so they will want another young pass catcher if they actually expect Rivers to find success this season in Indy. One factor that keeps the Colts at 4 is Mo Alie-Cox. The Colts like their 26-year old TE and Frank Reich wants him involved in his offense.

CHARLOTTE, NC – SEPTEMBER 23: Detail photo of a Cincinnati Bengals helmet during their game against the Carolina Panthers at Bank of America Stadium on September 23, 2018 in Charlotte, North Carolina. (Photo by Grant Halverson/Getty Images) Top 5 Fantasy Destinations for O.J. Howard

The Cincinnati Bengals are expected to take former LSU quarterback Joe Burrow with the 1st overall pick in the 2020 NFL Draft on Thursday night, and a reliable TE like Howard can help a young quarterback in a big way. Cincinnati lost Tyler Eifert to the Jacksonville Jaguars in free agency, and C.J. Uzomah and Drew Sample haven’t exactly proven that they are major threats in the passing game.

Joe Mixon is a premier running back, A.J. Green, Tyler Boyd and John Ross are good receivers; all Burrow is missing is that tight end. By adding Howard, the Bengals can solidify their attack and quickly become an offense worth reckoning with in the AFC. I wanted to rank the Bengals higher here, but I need to see Joe Burrow take that next step in the NFL first.

Like I just mentioned, a young quarterback’s development can be fast-tracked by a talented tight end, and that’s exactly what Washington Redskins QB Dwayne Haskins needs entering his second season. New head coach Ron Rivera released Jordan Reed this offseason and Vernon Davis retired. Rivera was hoping he could bring in his former Carolina Panthers tight end Greg Olsen, but he elected to sign with the Seattle Seahawks instead.

The Redskins did sign Logan Thomas and Richard Rodgers in free agency, but Howard would clearly be an upgrade over those two. Rivera likes his tight ends, so he should explore what the Buccaneers are looking for in return. The Redskins were initially my top ranked destination but I slid them back a spot due to the fact I’m not sold on this offense even with O.J. Howard scoring a lot of points.

The Green Packers took a flier on veteran Jimmy Graham a couple of seasons ago, and well, it didn’t work out as they had envisioned it. In 32 games, he caught 93 passes for 1,083 yards and just five touchdowns. Graham was released and now resides in Chicago.

The Packers do have a young talent in Jace Sternberger, but they could stand to add another tight end who can come in and make an immediate impact. Sternberger appears destined for fantasy relevance, but I am not confident his time has come as of yet.

Aaron Rodgers seeks a bounce back season. The Packers pass catchers (Davante Adams aside and Graham included) were disappointing to put it nicely in 2019. Expect the Packers to add a WR in the draft as early as round 1 in an attempt to address the need.

Aaron Rodgers needs reliable pass catchers, and that’s exactly what Howard provides. Green Bay has 10 selections in the upcoming draft. Shipping one of them off to Florida in exchange for Howard makes sense. The 36-year old QB is not getting any younger and the Packers window to win is now. A change of scenery for Howard would do wonders for him, and teaming up with one of the best quarterbacks in football would help them both. It’s time to free O.J. Howard – and it’s time for him to go to Green Bay.

Thank you for reading, “Top 5 Fantasy Destinations for O.J. Howard”