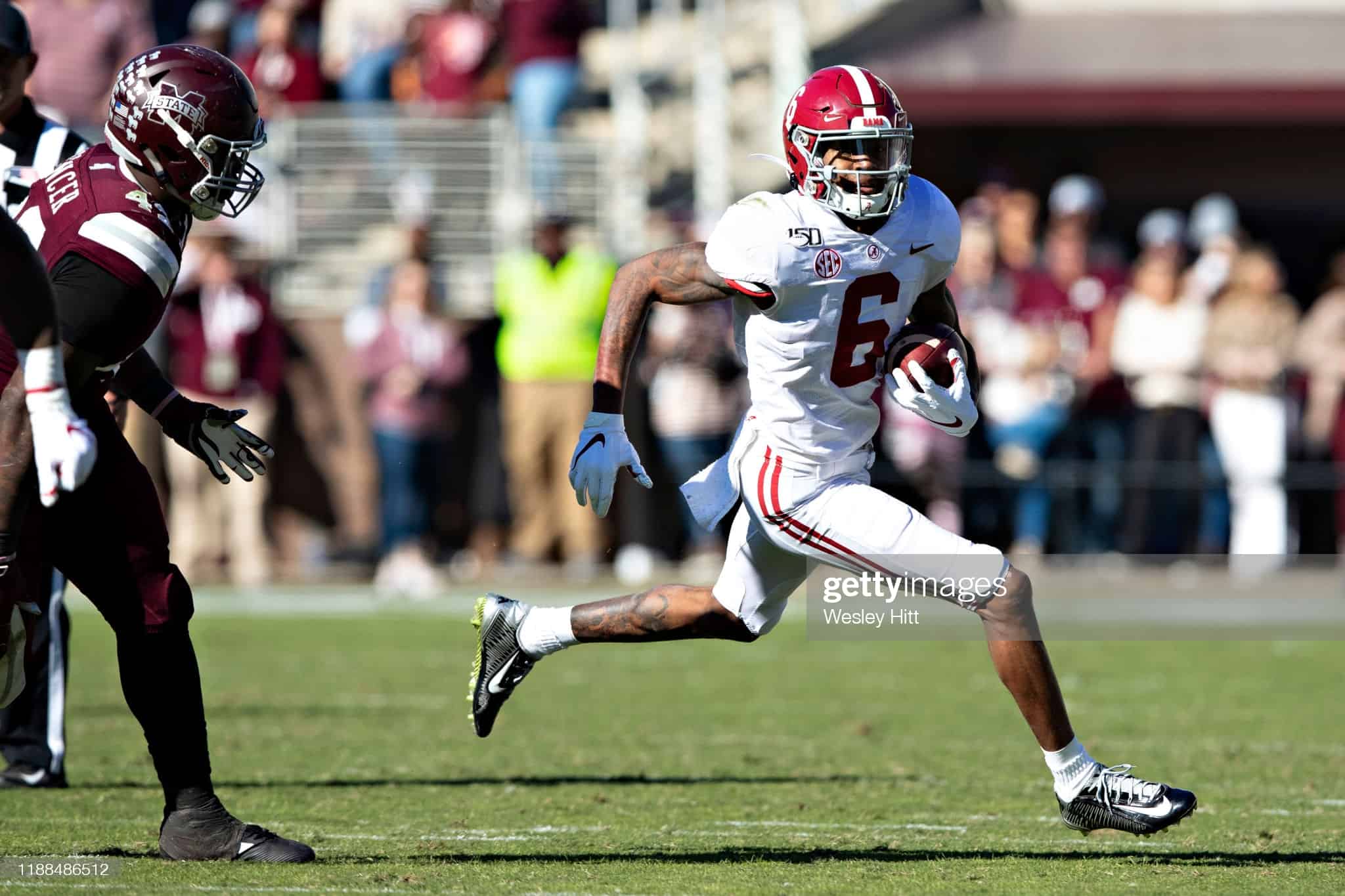 The keys to a successful fantasy football draft are choosing the right sleepers, avoiding the busts, and selecting the rookies who are best positioned to make an immediate impact for their teams. Sounds pretty simple doesn’t it?

This year’s rookie class is filled with players who are capable of helping you win your fantasy league, especially at the quarterback and wide receiver positions. The 2021 NFL Draft, like the 2020 draft, is deepest at wide receiver.

Forecasting which rookies will burst on the scene and which will struggle at the pro level is not an easy task.  That is why at RotoHeat we strive to help you out.  Here are 10 wide receivers to consider in your 2021 rookie drafts.

When studying Devonta Smith tape, there really isn’t anything that jumps out to me that I don’t like other than his size (6’1″/175LBS.). His thin frame, however, is not enough of a deterrent to have me lower him in my rankings. Smith won the Heisman Trophy in 2020, the first wide receiver to win the award in 29 seasons. Simply put, Smith is a fantastic WR and an exceptional route runner. Personally, I can not get enough of elite route runners, and Smith is the best in this class and one of the best in recent memory.

If you have my No.2 ranked Top 10 Dynasty Rookie Wide Receiver at No.1, I am not going to put up much a fight. Chase is more a 1B than a No.2 in this class. Chase opted out of the 2020 season a year after having a dominant sophomore season for the Tigers. With Joe Burrow as his QB, Chase averaged 21.2 yards per reception with 84 catches for 1,780 yards and 20 touchdowns. Chase was so good that Justin Jefferson was forced to play inside. We know how good Jefferson is, and there are some that think Chase can be even better.

At No.3 I have Minnesota WR Rashod Bateman.  Bateman offers his soon to be NFL team the abilty to be their No.1 WR, and is a WR that should come off the board towards the back half of the first round. He has the ability to play in both the slot and out wide. Bateman isn’t the fastest WR in this class, but he is another elite level route runner. I will be very pleased to acquire shares of Rashod Bateman this offseason.

When ranking Jaylen Waddle, I can’t help but think what could have been. Waddle was off to a blazing start in 2020 before suffering an ankle injury that kept him sidelined until the National Championship game. Another on a long list of top level WRs from Alabama, Waddle was all set to explode and form a 1-2 punch with Devonta Smith. In Waddle’s first four contests in 2020 he posted 25 receptions for 557 yards and 4 touchdowns. He was injured in Week 5 against Tennessee on the opening kick off.

The “Other Guy,” Terrance Marshall, took a back seat to Ja’Marr Chase and Justin Jefferson during LSU’s National Championship season in 2019. With Jefferson off to the Minnesota Vikings and Chase electing not to participate in 2020, Marshall was thrust into the alpha role for the Tigers in 2020. Marshall finished 2020 with a team leading 48 receptions and 10 touchdowns. Playing with a much less talented QB in 2020, Marshall posted 731 yards and 15.2 yards per reception. Marshall will be a valued member of his NFL clubs receiving core–he just won’t be the top dog.

Rondale Moore could be one of the best values at the WR position in this draft, yet he could also be one of the riskiest. There isn’t a lot that Moore cannot do except stay healthy. Moore, comes with some rather significant durability concerns. Are you getting the WR that as a true freshman in 2018 posted 114 receptions for 1,258 yards and 12 touchdowns in 13 games? Or will it be the WR that has appeared in 7 games since, totaling 64 receptions for 657 and a pair of scores? In essence, he’s the 2021 version of Jacksonville’s Laviska Shenault. With all that being said, I have always bet on talent, and that is what I will be doing with Moore as well.

The 2021 NFL class is deep at the WR position once again. Amon-Ra St. Brown at 7th in my Top 10 Dynasty Rookie Wide Receivers in 2021, feels about right. I like the USC product’s game, and I do feel that he will develop into a solid contributor in his team’s offense. He is a good athlete and he is a WR that runs good routes and has good hands. At 6’1″ 195 pounds, St. Brown has a good frame for a WR who projects to line up in the slot.

If you like players that are fun to watch and make things happen with the football in their hands, you may want to rank Kadarius Toney higher than I have. Simply put, Toney is one of the most dynamic wide receivers in the NFL Draft. What I like the most about Toney’s game is his route running, Toney is going to break a few defenders’ ankles before his career is over. He is on the smaller side at 5’11” 189 lbs., but similar to Devonta Smith, that is not much of a deterrent for me.

Coming out of high school, Elijah Moore was a 4-star prospect and was offered scholarships by over a dozen college programs. In the end, he picked Ole Miss over offers from LSU, Alabama, OSU among others. Entering 2020, Elijah was an afterthought and had fallen off the radar. With the arrival of Head Coach Lane Kiffin, combined with a 86 catch, 1,193 yard, and 8 touchdown breakout season, he’s firmly back on the radar. Moore posted those totals in only 8 games in 2020. Moore projects to be a day two pick and he is another undersized WR (5’9″ 185lbs.) that I really like.

Tylan Wallace put up some impressive numbers at Oklahoma State . He broke out 2018, and led the Big 12 with 1,491 yards (2nd in the nation), and was a Biletnikoff Award finalist. He continued to be productive in 2019 (903 yards and eight touchdowns) before tearing his ACL ending his season. Wallace retuned to college in 2020 and his season was cut short due to a knee injury again. He ends his Cowboys career with 3,384 receiving yards and 26 touchdowns. Wallace is extremely talented, and his injury woes likely cause him to fall into day 2 or 3. Regardless, he is a WR that I will target in my rookie drafts in 2021.

Thank you for reading Top 10 Dynasty Rookie Wide Receivers in 2021.