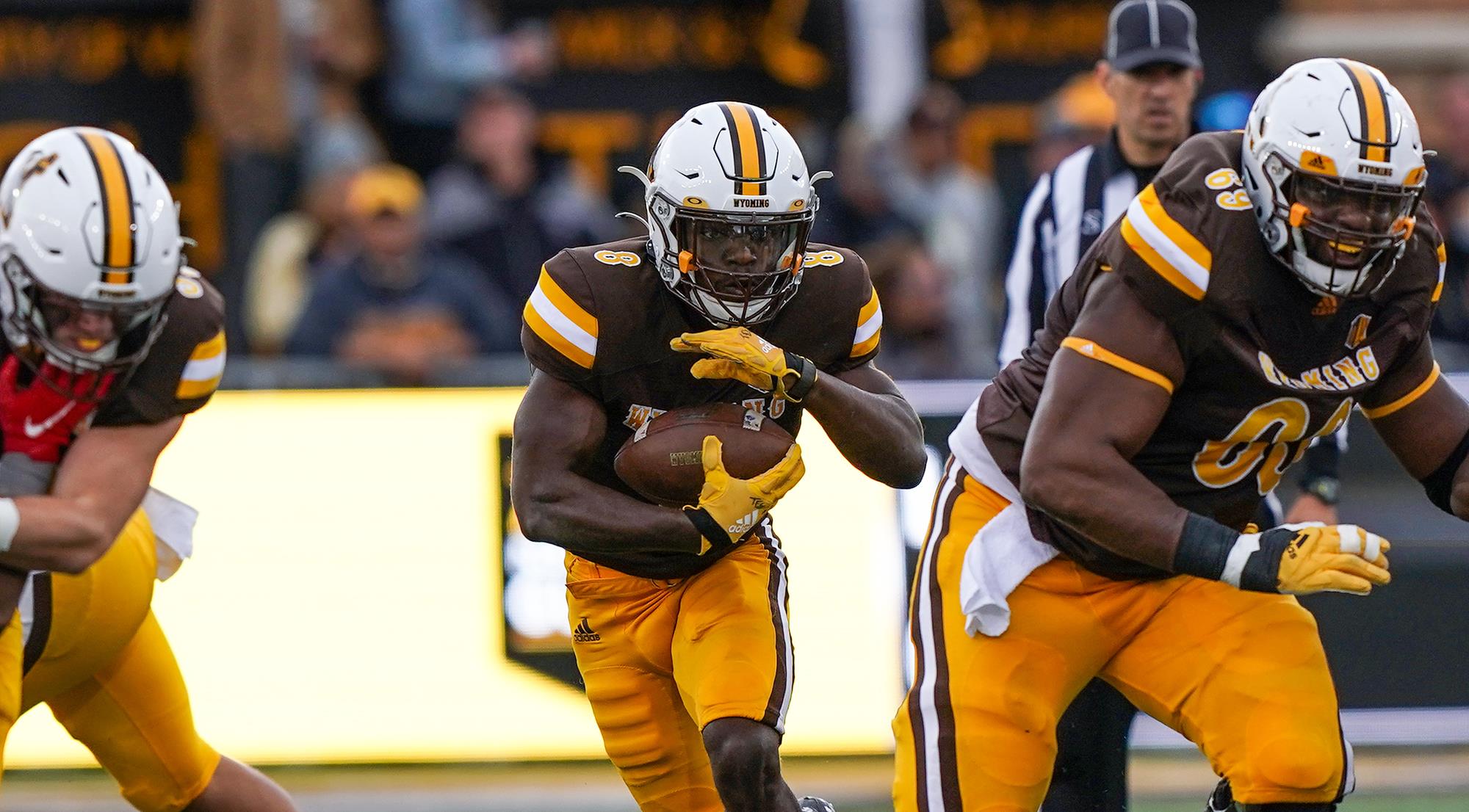 Next up in our player profile series is Wyoming running back Titus Swen, the 5’11, 200+ pound back from Haslett, Texas. Swen hasn’t had a ton of reps at Wyoming, having just under 200 carries in 2 seasons (you know, 2020 and all that). He was a 3-star prospect coming out of Eaton High School in the 2019 recruiting class, and is a player coming into the 2022 season with as growing excitement to see how he can perform as the Cowboys lead back (Athlon has him as a Mountain West All Conference Team Member)!

Swen had offers from some pretty strong programs, including SMU and Arizona State (Thanks Rivals) and was considered a top 150 prospect in his class but even in his short playing time with Wyoming, people see a strong back that the team quickly leaned on when things got tough (See the Potato Bowl).

Titus Swen will be a guy that people could fall in love with this fall, if you watch his tape you see a powerful between the tackles runner that will slip in some sneaky jump cuts and has no fear when it comes to lowering a shoulder and crushing opposing linebackers. His Twitter account is a good follow, and he’ll post some clips and you can see the power as well as a strong stiff-arm game, though obviously on his personal account, he’s not looking to post the negatives lol.

Another pro (and potentially a con) is just the lack of tread on the tires, my hopes are this season we see a healthy dose of Swen, so we can see what he brings to the table. Looking at the Cowboys 2022 Schedule, they have some fun matchups that could showcase what Swen brings to the table, taking on Illinois week 1 is a good way to start the season.

It’s way too early to say what round I anticipate a player going in the NFL Draft, especially when running backs value continues to dip later and later but this guy could be a nice piece of a 1-2 punch for a team that needs a physical back to go with their “scat” or receiving back. I haven’t seen him catch alot out of the backfield, and it shows with less than 10 catches so far in college.

Titus Swen – Thanks For Stopping By!

The college season could be big for a player like Swen, if Wyoming can get him some catches out of the backfield to go with at least 200 rushing attempts, you could see this guy be a player to watch come draft season next year. With Valladay transferring to Arizona State, Swen has no competition and could easily see between 200-250 rushing attempts (see Pro-Football-Reference for 2021 breakdown) and really put is powerful running style on display, which is a very good thing for fantasy football!