Home Redraft Start or Sit These Players on Monday Night to Win Week 2... 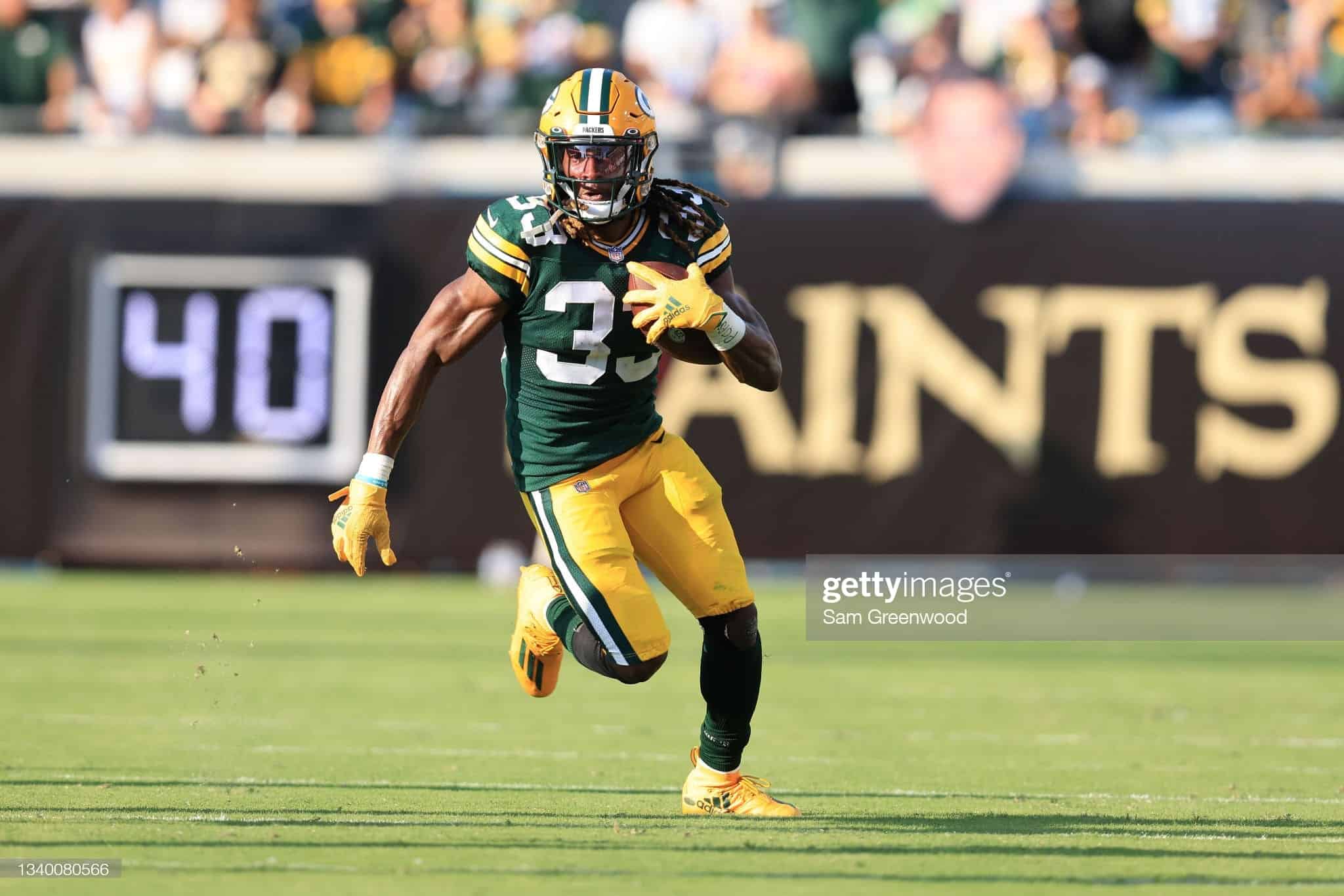 Week One’s Monday Night Football matchup in Las Vegas was a crazy, highly entertaining game in which the Raiders won their home opener 33-27 over the visiting Baltimore Ravens in overtime. In Week 2, we get two NFC North divisional rivals looking to bounce back from Week 1 losses. The Detroit Lions visit Green Bay to challenge the Packers.

Hopefully you entered Week 2 looking to go 2-0, but rest assured, if you are 0-1 and looking to even your record his week, all is good. The fantasy season goes quickly but it is a marathon not a sprint. Fantasy football is a four month journey that hopefully concludes in a fantasy championship. I will be with you every step of the way with recommendations on who to start and who to sit for every Monday Night Football matchup.

With out further ado, let’s make the moves required to wrap up your Week 2 victory.

The Los Angeles Rams wanted to rid themselves of Jared Goff and his massive contract prior to the 2021 season. As a result, LA ended up sending Goff to Detroit along with a third-round pick in 2021 and first-round picks in 2022 and 2023 for Matthew Stafford. That’s a lot to give up to move a player, regardless of what the deal nets you.

Goff started off his Lions career looking extremely uncomfortable, but steadily improved as the game moved along. In the end, Goff completed 38 of his 57 pass attempts for 338 yards, 3 TDs and a pick. That all added up to 29.92 points and a QB3 finish.

There will be plenty of weeks this season that Jared Goff is a starting fantasy QB based on volume alone. Week 2, however, is not one of them. On the road in Green Bay on Monday Night, despite the fact the Lions will be trailing and throwing a ton, is not the best scenario for Goff.

The Packers got rolled up last week in Jacksonville against the New Orleans Saints 38-3. The team as a whole will bounce back in this one, the defense included. I’d consider Goff in a Superflex or 2 QB league, but in a 1QB format he’s going to be on my bench.

This isn’t a tough decision, and one that would have been seen as a no-brainer prior to a week ago. There may be some fantasy managers that are scared off by his 3.32 point outing last week and I get it, but don’t be. Nothing cures a slump like facing the Detroit Lions. Opposing QBs threw all over the Lions a season ago to the tune of 4,753 yards and 38 touchdowns. The yards were second worst and the touchdowns the worst.

Last week Jimmy Garoppolo and Trey Lance combined for 314 passing yards and a pair of scores. So, as Aaron Rodgers would say, R-E-L-A-X, and start him with confidence.

In my Sunday Start/Sit article last week, I recommended that you sit D’Andre Swift, and I was wrong. Shift had a great game against the San Francisco 49ers that I did not see coming. D’Andre finished with 104 total yards, a touchdown, 24.4 PPR points and a RB4 finish last week. Fool me once, shame on you, fool me twice, shame on me.

I will have Swift in my lineups this week and I suggest you do the same. The Packers were not great against opposing running backs in 2020, finishing 8th worst and allowing 25.8 points to the position. When it comes to pass catching out of the backfield, Green Bay allowed the third most yards (793), and the third most touchdowns (5) in 2020.

Last week, Alvin Kamara and Tony Jones Jr. combined for 133 rushing yards on 31 carries and scored a combined 24.4 PPR points. For at least one week, the 2020 trend remains in place. Start Swift this Monday.

Detroit Lions RB Jamaal Williams also had himself a nice game last week in the loss to the Niners. Williams ran for 54 yards and a touchdown on 9 carries and hauled in 8 of his 9 targets for another 56 more. His 25 PPR points were good enough for a RB2 finish on the week.

I am starting Williams this Monday for the same reasons as noted above for D’Andre Swift. The Lions have limited weapons and the two backs are certainly going to see plenty of snaps and touches. Detroit, also has a good offensive line. The other factor to consider when determining to start or sit Jamaal Williams is revenge.

Williams spent the first four years of his career as a member of the Green Bay Packers after being selected in the fourth round of the 2017 NFL draft. Green Bay opted to let Williams go to market this offseason after re-signing Aaron Jones and deciding to go with A.J. Dillion over Williams. I have a feeling that Jamaal is a little extra motivated, and as a result, his first visit back to Lambeau Field makes him a start.

After years of fading Aaron Jones, I believe that I have finally seen the light and realized how talented a back Aaron Jones really is. In my preseason PPR rankings, I listed Jones as my RB4. Week 1 wasn’t what I was anticipating. Jones was limited to 5 carries for 9 yards and 2 catches for 13 more. His 4.2 points were 50th best at the position in Week 1.

Similar to Aaron Rodgers, I feel strongly that a matchup against the Detroit Lions defense will enable Aaron Jones to get back on track. The Lions allowed 29 touchdowns to opposing running backs in 2020 (1.8/game), and the 32.2 points allowed to the position was the worst in the league.

In Week 1, the Lions gave up 104 yards and a touchdown to 6th round rookie Elijah Mitchell and gave up another score to 2020 UDFA JaMycal Hasty. With all due respect to both of these backs, neither of them are close to the talent that Aaron Jones is. Jones is my 5th ranked RB this week, so start him with the utmost confidence.

A.J. Dillion will get some work in the Packers backfield on Monday, but without a touchdown I don’t see him having a large enough role to be fantasy relevant in Week 2. I am going to sit him this week, but I remain optimistic for the coming weeks. I still have no idea how the Packers are planning to deploy the running backs in the red zone.

If the Detroit Lions have a No.1 WR it would be Tyrell Williams, and he has been ruled out with a concussion. I really want to be able to deliver some cutting edge fantasy analysis here, but I am not sure I can. It’s not very often that I will suggest you sit an entire team’s wide receiver corps, but that is exactly what I am suggesting this week.

The Lions have arguably the worst collection of wide receivers in the NFL. It is possible that St. Brown, Cephus, or even Trinity Benson do some damage in garbage time, but I am not counting on it. If the Lions do anything offensively this Monday night, I see it coming from the backfield and T.J. Hockenson.

Keeping up with the theme of an overall Packer offensive bounce back game, enter Davante Adams. Like Aaron Rodgers and Aaron Jones, Adams did not deliver what his fantasy managers were looking for in Week 1. Adams, the WR1 in fantasy a season ago, finished with a team leading 5 receptions for a team leading 56 yards. 10.6 PPR points is simply not what we have become accustomed to from Davante Adams.

The good news for Packer fans and Davante Adams fantasy managers is not only are the Lions accommodating to the quarterbacks and running backs, but they are also very giving when it comes to opposing wide receivers. Detroit was the second worst team in the league against opposing WRs in 2020, allowing on average 44 points per game. Last week they gave up 31.9 PPR points to San Francisco’s Deebo Samuel.

In two contests versus the Lions a year ago, Adams totaled 10 catches for 151 yards, and a touchdown. Those numbers are not eye-popping, but its important to note that Adams left the Week 2 contest twice due to injury and was done for good early in the second half. Davante Adams is the best wide receiver in the game today. Add in he has a motivated QB on Monday night who is also one of the game’s best and it easy to determine he’s a must start WR. You should never be sitting Adams regardless of situation and matchup, but that doesn’t mean you can’t get excited for a matchup as juicy as this one.

There are few wide receivers that I can think of that are as frustrating to roster as MVS. With that said, he was the lone bright spot in Week 1. Ok, bright spot might be a stretch. MVS saw a team leading 8 targets in Week 1 that he turned onto 3 catches for 17 yards. Call me crazy but this one has a 3 catch 80 yards and a touchdown kinda feel to it. If you are thin at WR and need a flier, start MVS in your flex spot this week.

After we get past Aaron Jones, Davante Adams, MVS, and Robert Tonyan, there is very little meat left on the bone. Sure, Randall Cobb, Allen Lazard, or Amari Rodgers might score here, but do you really want to count on it? With no teams on bye and the majority of the league healthy (knock-on-wood), there is no reason to start these guys unless you play in a “Green Bay Packers only” fantasy league.

T.J. Hockenson is the real deal in this Lions offense no matter how inconsistent Jared Goff might be. The two apparently already have good chemistry and he showed his value against what is expected to be a top-tier 49ers defense in Week 1. Hockenson caught 8 of 10 targets for 97 yards and a touchdown.

His 25.7 PPR points were good for third at the position in Week 1. In Week 2, Hockenson gets a prime-time matchup against a Packers defense that gave up two touchdowns to Juwan Johnson. Hockenson is a good start regardless of matchup as he is the top pass catcher on the Lions, and he will see a ton of targets. Hockenson is a weekly must start TE, and this week is no different.

Based on the flow of this article, I am fairly certain that you understand that I feel the Green Bay Packers are going to rebound in a big way. So it should come as little surprise that I am starting Robert Tonyan this week.

Of all the skilled positions, Detroit was toughest on the tight end a year ago, and they held George Kittle to a modest 4 catches for 78 yards in Week 1. That doesn’t mean I feel the Lions are good at defending the TE, it’s more a situation of there are only so many plays in football game, and when your RBs and WRs are lighting up the defense, there is only so much left for your tight end.

With that said, Robert Tonyan scored a touchdown in each game against the Lions in 2020. One way to look at it he has never faced the Lions and not scored. I have a hunch he keeps the streak alive this Monday, and as a result he’s a start.

Thank you for reading Start or Sit These Players on Monday Night to Win Week 2 Fantasy.