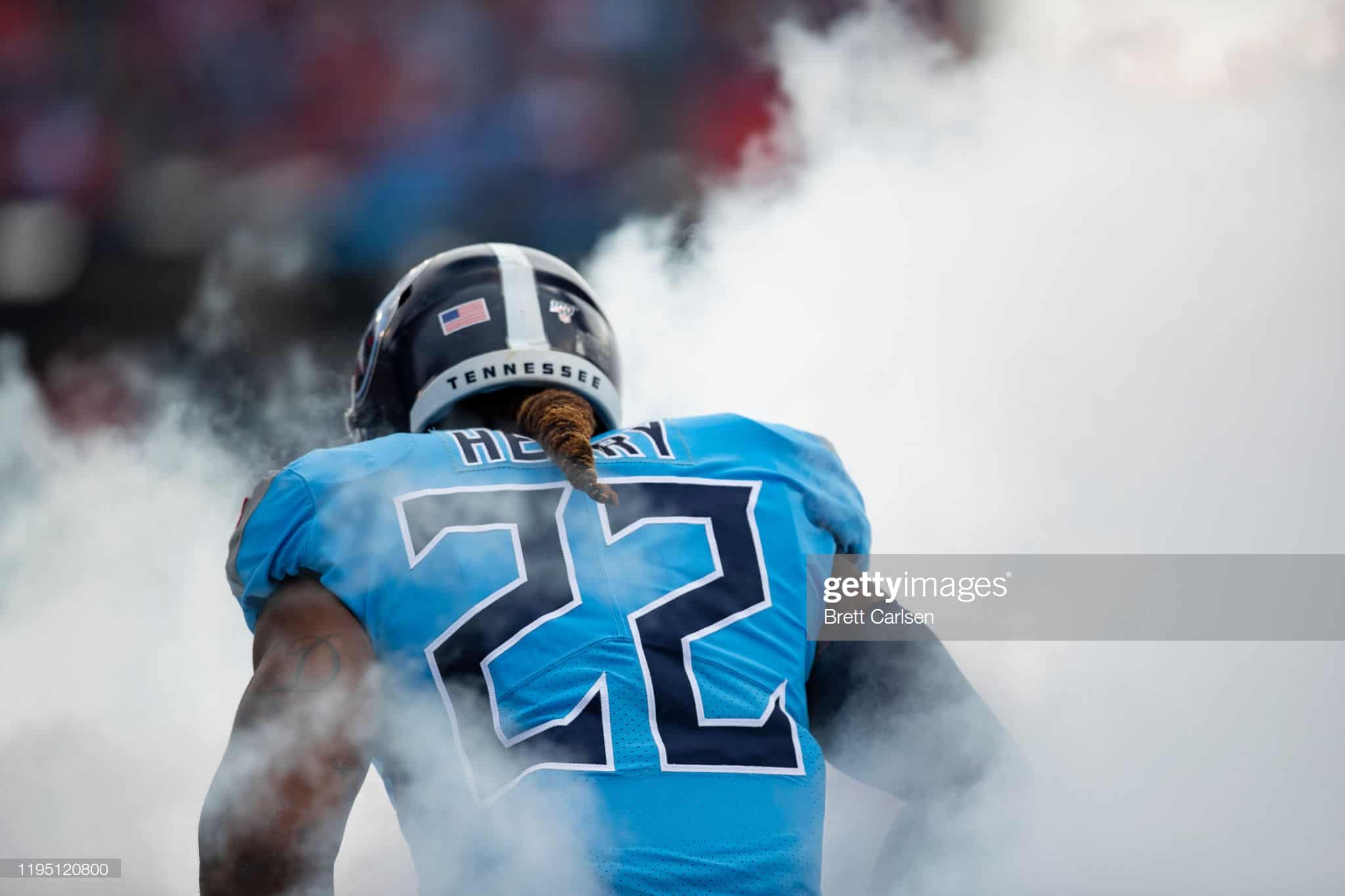 Derrick Henry is a polarizing running back

in the dynasty community. It seems that there aren’t many people that just like him. It is a love/hate relationship that has been going on since he was drafted.

Since the end of 2018, Henry has been given an a ton of rushing attempts and in turn, he has been one of the best scoring running backs in the league. The question is, can he sustain his value, or is it time for you to cash out?

5. Boom or Bust, Not Much In Between

NASHVILLE, TN – DECEMBER 15: Derrick Henry #22 of the Tennessee Titans runs the ball and is tackled by Tashaun Gipson Sr. #39 and Justin Reid #20 of the Houston Texans at Nissan Stadium on December 15, 2019 in Nashville, Tennessee. The Texans defeated the Titans 24-21. (Photo by Wesley Hitt/Getty Images)

One stat that really caught me off guard, was that Derrick Henry carries ended with less than 4 yards on 54% of his runs. While that sounds crazy, I will say that the average for runners with 70+ carries comes in at 56%, but all players can thank Kalen Ballage and his 73% for adjusting the curve a bit.

Either way, this is a category that I really expected Henry to be well above average. The stat that really stuck out, was the fact that he was 40% above average on 10+ yard runs at 14% of his carries.

What does this mean? Right now, Henry is relying on big carries for the majority of his yardage. This is shown by the fact that his top 10% of runs equate for 42.44% of his overall production. Big carries aren’t only a volatile outcome for running backs, but as careers progress and the hits add up, they “normally” become fewer and farther between.

OAKLAND, CALIFORNIA – DECEMBER 08: Derrick Henry #22 of the Tennessee Titans warms up prior to the start of an NFL football game against the Oakland Raiders at RingCentral Coliseum on December 08, 2019 in Oakland, California. (Photo by Thearon W. Henderson/Getty Images)

NASHVILLE, TN – NOVEMBER 10: Derrick Henry #22 of the Tennessee Titans warms up before the game against the Kansas City Chiefs at Nissan Stadium on November 10, 2019 in Nashville, Tennessee. Tennessee defeats Kansas City 35-32. (Photo by Brett Carlsen/Getty Images)

I think this could easily be traced to top 12 running backs Alvin Kamara (11) & Saquon Barkley (12) missing a total of 5 games.

NASHVILLE, TENNESSEE – NOVEMBER 10: Derrick Henry #22 of the Tennessee Titans rushes against Juan Thornhill #22 and Anthony Hitchens #53 of the Kansas City Chiefs during the second half at Nissan Stadium on November 10, 2019 in Nashville, Tennessee. (Photo by Frederick Breedon/Getty Images)

Listen, I am not questioning Derrick Henry’s talents as a runner. When it comes to PPR leagues, history shows us that running backs need minimum of around 35 receptions to hang in the top 12. When any RB comes off of a season as the RB7 with only 18 receptions, they are going to be a sell candidate anyways.

Yes, the big play capability is awesome and who doesn’t like watching a 6’3″ 247lb running back running full speed while running over defensive backs? The fact of the matter is that you can’t count on running backs to consistently doing that.

Even if he finishes as RB15 next year, you will have lost a good amount of perceived value. If he runs for 1,100 yards and 8 touchdowns next year, that would be a nice season. But in comparison to 2019 that would be around RB15 overall. That is not unrealistic at all and I really don’t want to be relying solely on yardage & touchdowns when I don’t have to.

CLEVELAND, OHIO – DECEMBER 22: Odell Beckham Jr. #13 of the Cleveland Browns runs a route against the Baltimore Ravens during the first half in the game at FirstEnergy Stadium on December 22, 2019 in Cleveland, Ohio. (Photo by Jason Miller/Getty Images)

As mentioned in the opening, the love/hate with Derrick Henry is polarizing. Luckily for us, there are a number of players that you may be able to get for Henry after his RB7 season.