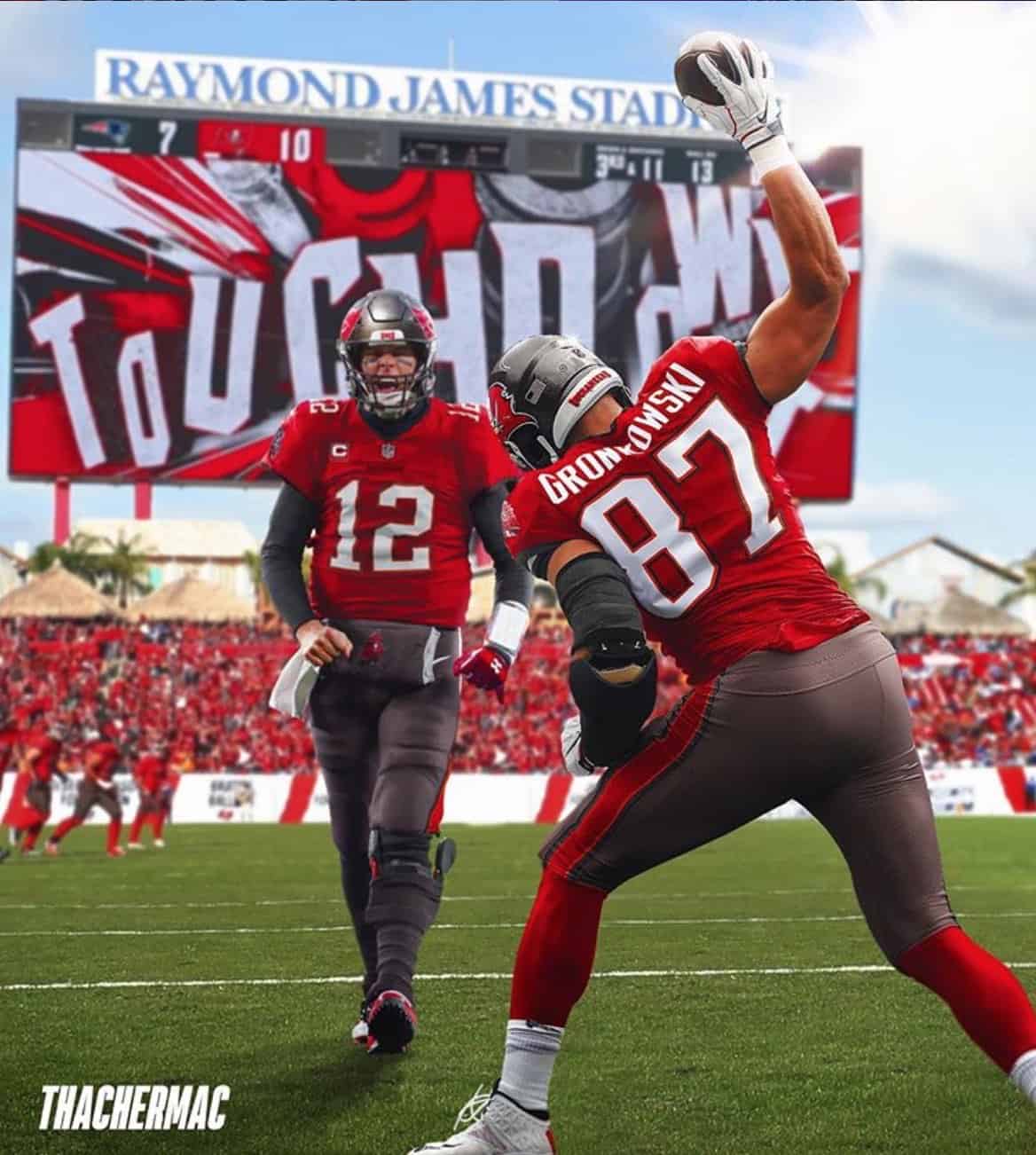 On Tuesday April 22, 2020, the Tampa Bay Buccaneers traded for the rights to former New England TE Rob Gronkowski. The transaction includes the Bucs 2020 fourth-round pick heading to the Pats, and their seventh-round pick in 2020 to Tampa.

The move brings Gronk out of retirement and reunites him with QB Tom Brady. Gronkowski retired last spring after nine NFL seasons that put him in the conversation of greatest tight end of all-time. He retired with 521 career catches for 7,861 yards and 79 touchdowns, including five seasons with 10 or more touchdowns.

Gronkowski has played his entire career with Tom Brady as his quarterback, and that relationship will continue into 2020. Gronkowski has caught 78 touchdown passes from Brady–twice as many as any other player in the former Patriots quarterback’s 20-year NFL career.

Injuries had been an issue for Gronkowski and likely the driver behind his 2019 retirement announcement. He missed 29 games in his career and 13 games in his last three seasons alone. After posting double-digit touchdown receptions in five of his first six seasons, he had a total of 14 touchdowns between the 2016-18 campaigns. Clearly his ability to remain on the field has a direct correlation to his fantasy outlook.

If Tampa Bay retains O.J. Howard for the 2020 season, they will also be retaining one of the best blocking TE’s in football. With Howard in the lineup, Gronkowski plays less snaps and blocks less. If Howard is dealt, Gronk’s snaps increase as do his blocking requirements and potentially increases the risk of injury. In 2018, Gronkowski showed above average blocking skills of his own. Regardless of the roster, where Gronk will play the majority of the meaningful snaps and he will certainly be on the field is in the red zone.

There is not a lot of historical data for retired TE’s returning after a year in retirement. We do however have the recent un-retired Jason Witten to refer to. In 2017 Witten finished as TE9 with 63 receptions for 560 yards and 5 touchdowns. Upon his return in 2019 he was TE11 with 63 receptions for 529 yards and 4 touchdowns. In 2017, Witten had 147 PPR points and in 2019 he delivered 139.9. Retirement didn’t seem to impact him positively or negatively.

Projecting Gronkowski to finish outside the top 12 in 2020 is foolish in my opinion. He was brought to Tampa Bay for one reason and that is because Tom Brady wants him there.

Throughout his career, Brady has preferred pass catchers that he can trust. In a year with limited off-season activities if any, his most trustworthy asset is Gronkowski. With a year off to rest his beat up body, I believe Gronk will be back closer to his 2017 self than his 2018.

As much as I like the addition of Rob Gronkowski to the 2020 Buccaneers and your dynasty rosters, I’m not so sure I can continue that beyond 2020. I imagine Gronk plays 2 more years at the most, and I wouldn’t be overly surprised if he was to hang the cleats back up after 2020, especially if its another injury riddled campaign. If Gronk comes through 2020 in tact and the Buccaneers appear to be contenders, then I do see a 2021 season in his future, and likely another top 12 TE finish.

I haven’t had the chance to rank Gronk as of yet. At first glance, I would imagine I will rank him around 150th overall and as my 17th ranked TE in dynasty. My redraft rankings will have him in the top 10. If you are a dynasty contender, I would go after Gronkowski, and if I own him and I am not contending I am targeting the top teams in my league and selling.

Based on the FABB dollars spent in my leagues this morning on Rob Gronkowski, I am not alone in my thoughts for 2020.

Thank you for reading the Rob Gronkowski 2020 Dynasty Outlook.