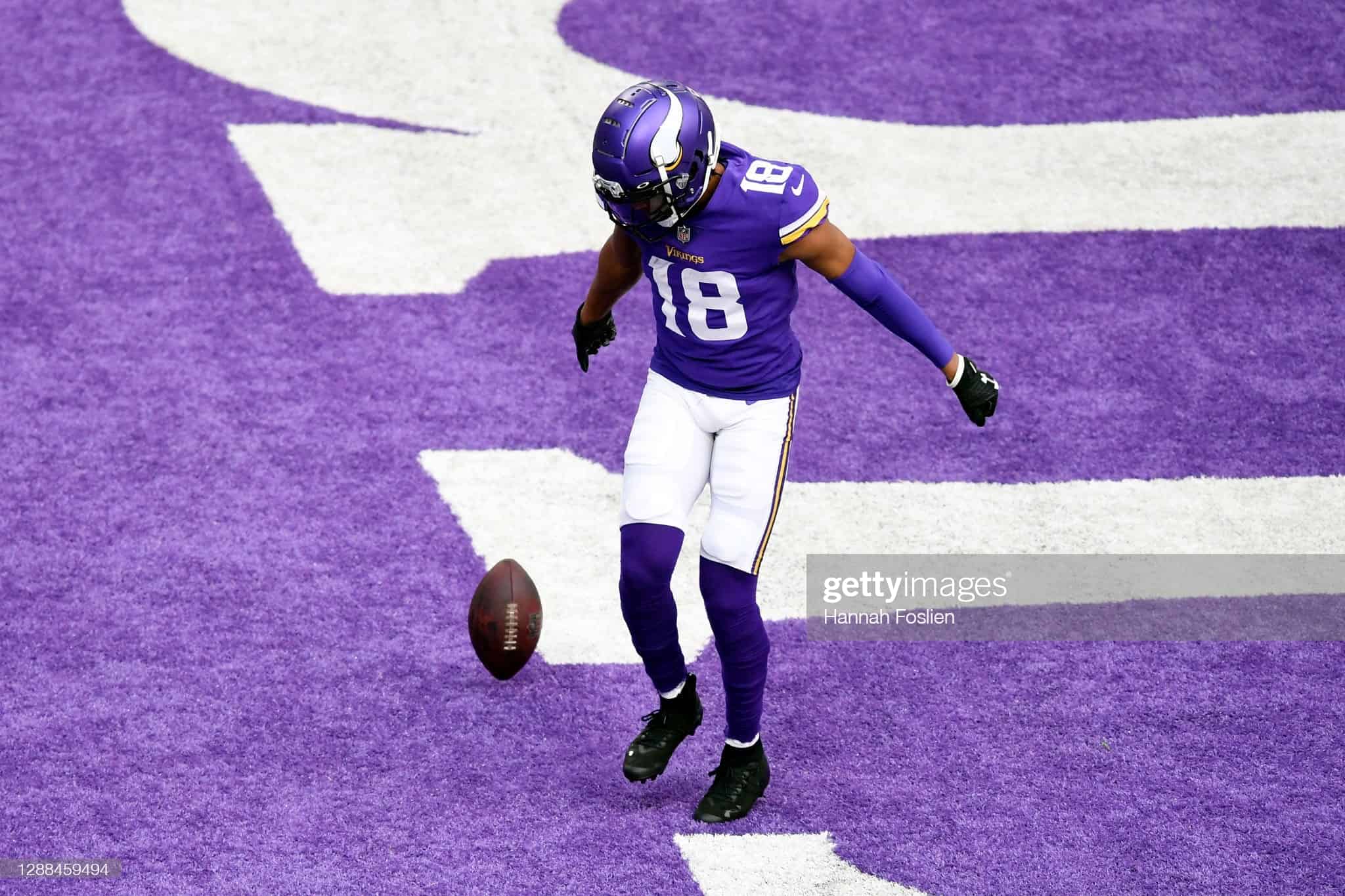 In the third and final installment in the series, 2020 Rookie Class Part III reviews the rookies selected in the first round a year ago. This time of the offseason the dynasty manager is focused on the incoming rookie class, and rightfully so. The NFL draft recently concluded, and most dynasty managers have started right into their 2021 rookie drafts. There are rookies we are collectively high on like Ja’Marr Chase, Najee Harris, and Kyle Pitts. There are also the lesser hyped rookies that managers will add in later rounds of their drafts like Tylan Wallace, Elijah Mitchell, and Hunter Long.

Last year was a rookie class full of promise and upside, but where are they now and how should they be viewed entering their sophomore season? In this three part series, I review all skill positional players drafted within the top 100 picks in the 2020 NFL draft starting with the third round and concluding with round one.

Burrow averaged 17.87 fantasy points per game in his rookie season and finished as the QB25. The reason he finished as QB25 was he was lost for the season in Week 11 due to a torn ACL. Entering Week 11, Burrow was sitting at QB16. Entering the 2021 season, Burrow is still recovering from the injury and the surgery. His timeline for Week 1 at the moment is somewhat unclear.

In the draft, the Bengals added LSU WR Ja’Marr Chase with the 5th overall pick. I believe they should have added offensive line help, but regardless, Burrow now runs an NFL offense full of weapons. His three wide receivers are Chase, Tee Higgins, and Tyler Boyd, and his main RB weapon is Joe Mixon. I worry about his longevity behind that porous line but not enough to move him.

Tua had an up-and-down rookie season in Miami. He started on the bench behind Ryan Fitzpatrick and surprisingly took over to start Week 7. He somewhat held onto that role the remainder of the season. He started each game the rest of the way but was pulled in three of them.

Tua finished his rookie campaign as QB32, averaging 14.05 points per game. During the 2021 draft, the Dolphins added WR Jaylen Waddle, TE Hunter Long, and upgraded the offensive line with Liam Eichenberg. Miami also added free agent Will Fuller for the 2021 season. I am cautiously optimistic when it comes to Tua, as I like the direction the Dolphins are heading. I am interested to see how Tua performs a year after his major hip surgery.

Justin Herbert started the season on the bench for the Chargers and was thrust into the starting role in Week 2 after an injection into the chest of starting QB Tyrod Taylor punctured his lung. Herbert took over and never looked back. He finished the season with 4,333 yards, 31 touchdowns, and 10 interceptions.

Justin Herbert broke almost every conceivable NFL rookie passing record during the 2020 season including most passing touchdowns (31) and most completions (396). Herbert finished 2020 as QB9 with 342.84 points averaging 22.86 points per game.

The Chargers have a new coaching staff in 2021 and a new and improved offensive line adding Corey Linsley via free agency and Rashawn Slater via the draft. Hunter Henry is gone, Jared Cook is in, and Josh Palmer arrives to compete for the WR3 spot. All signs point to more of the same for Justin Herbert in 2021 and beyond.

The first wide receiver selected in the 2020 NFL draft was Alabama WR Henry Ruggs who finished as the WR94 with 84.1 PPR points, an average of 6.5 per game. His 84.1 points were 12th amongst rookie pass-catchers in 2020.

To say Ruggs was a disappointment is a massive understatement. He went over 100 yards once, over 80 once, and scored twice. In his 13 games (12 starts), he averaged 3 targets per game and was overshadowed by Nelson Agholor and Hunter Renfrow, not to mention Darren Waller.

Ruggs is a tough one to figure out. The Raiders as a team have gotten worse and his role is unclear with the addition of John Brown. At this point, if you are a Henry Ruggs manager you are best to hold and hope for the best. You burnt first-round rookie draft capital here and you certainly are not getting it back. If you can find a manager that wants out, take a flyer, just don’t spend much to get it done.

Jerry Jeudy entered last season’s rookie drafts as the top-ranked WR on the majority of draft boards (not mine). He ended his season as WR45 with 157.6 PPR points, an average of 9.9 per game. His 157.6 points were good enough for 6th amongst rookie pass-catchers in 2020.

Jeudy appeared in all 16 games for the Broncos, starting 14 of them, and was targeted a team-high 113 times.

That is the good news; the bad news is he only hauled in 52 of the passes (46%). Jeudy suffered from lackluster QB play last season, catching passing from Drew Lock, Jeff Driskel, and Brett Rypien. The biggest loss for Jeudy and the Broncos in 2020 was WR Courtland Sutton.

Sutton returns in 2021, and the double teams and opponents’ top corner will become his problem and not Jeudy’s. I also expect the QB play to improve. I am looking to buy Jeudy everywhere I don’t have him, and I am holding on tight where I do.

Lamb was my WR1 last season and although he didn’t finish there, he remains a player I like a lot. He finished his rookie season with 111 targets, 74 receptions, 935 yards and he scored 5 times. He was WR22 with 217.7 PPR points, averaging 13.6 per game. His 217.7 points trailed only Justin Jefferson among the rookie wideouts.

Lamb’s starting QB, Dak Prescott, was lost in the first half of Week 5 for the remainder of the season.

After Week 5, Lamb was sitting at WR11. The remainder of the season, with the combination of Andy Dalton, Ben DiNucci, and Garrett Gilbert as his QBs, Lamb was WR35.

Dak is back in 2021 and all of the Cowboys’ offense will benefit. If you can afford the price, go get yourself some CeeDee Lamb. If you currently roster Lamb, hold him tight and do not consider moving him unless it’s for a king’s ransom.

The fourth wide receiver to come off the board in the 2020 NFL draft was TCU WR Jalen Reagor. In his rookie season, he posted 72.6 PPR points, averaging 8.1 points in his 9 games played.

Reagor suffered from poor QB play at TCU, and that continued into the NFL. In addition to poor QB play, his productivity was limited by injury.

He missed the majority of training camp with a shoulder dislocation and then missed 5 games during the season due to a torn thumb ligament.

Reagor finished out the 2020 season as the WR64 from Weeks 8-17. It’s hard to be down on a rookie WR after just one season, especially one who had no offseason program, missed the majority of training camp, and was injured in his rookie season. I wouldn’t say I am down on Reagor, but if he was on my roster, I would be rather nervous.

Entering 2021, the Eagles for the second straight season selected a WR in round one (Devonta Smith). The addition of Smith will likely lead to Greg Ward playing in the slot and Smith and Reagor being on the outside. The Eagles won’t be a pass-heavy team with Jalen Hurts at QB, and I haven’t even mentioned Dallas Goedert yet. I fail to see a path to much more than a WR3 here. If I can find a dance partner to move Reagor I am certainly going to consider it.

Eagles fans must kick themselves every time they see Justin Jefferson’s name. Being the 5th WR off the board, one pick after the Eagles selected Reagor, is the reason why. Jefferson exploded in his rookie season for the Vikings. He finished with a league rookie record of 1,400 yards, and he finished as WR6 overall with 274.2 PPR points. Jefferson didn’t start for the Vikings until Week 3.

Entering his 2021 season, he is the team’s No.1 WR. The Vikings upgraded the offensive line and improved their defense. The Vikings threw way more than they would have liked a year ago, so look for that number to decrease in 2021. Jefferson, regardless of the Vikings offensive splits, is a WR you hold onto and enjoy for years to come.

Brandon Aiyuk struggled to stay on the field in 2020, but he made the most of it when he did. Aiyuk came off the board with pick 25 after the San Francisco 49ers traded up. Aiyuk finished his season as WR35 with 184.5 PPR points, averaging 15.4 points per game (18th overall and second among rookie WRs).

Aiyuk’s season was limited to 12 games–he was inactive in Weeks 1 and 17–and lost an additional two games (Weeks 9 & 12) as a result of being placed on the Covid-19 list. When on the field, Aiyuk certainly benefitted from the absence of TE George Kittle and WR Deebo Samuel. There are likely managers in your league with Aiyuk on their rosters that question his level of contribution when the Niners are at full strength. Find those owners and make an offer. The Niners offense is loaded and has the potential to be one of the highest-scoring in the league in 2021.

With the final pick of the opening round in 2020, the Super Bowl Champion Kansas City Chiefs selected LSU running back Clyde Edwards-Helaire.

CEH immediately catapulted atop many rookie rankings and into the top 5-8 of season-long rankings.

The price that CEH cost his fantasy managers turned out to be a poor investment. CEH finished as RB22 with 176 PPR points in 13 games played (13.5 per game). His production was fine in his rookie season, but he struggled in the red zone and wasn’t as involved as his fantasy managers were hoping for.

CEH has upside–a lot of upside. What he never was, and likely never will be, is a top-5 dynasty running back. If you have him on your roster then you paid an inflated price. You need to hold as you are not going to get that return if you move him.

Thank you for reading Revisiting the 2020 Rookie Class Part III