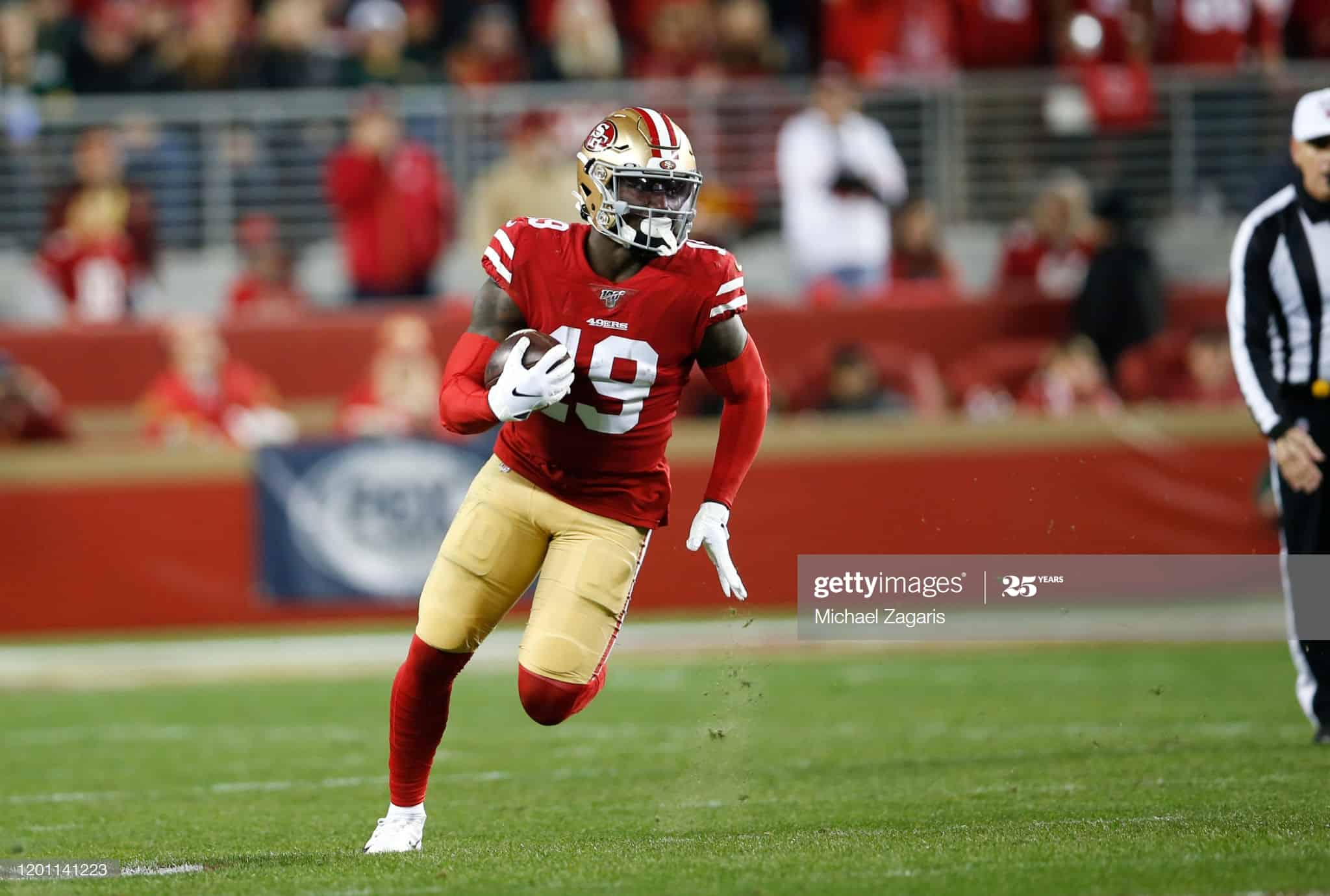 Knowing who will be the Redraft Sleepers Breakouts and Busts would be a huge advantage come draft day. Each Fantasy season we have players that seemly come out of nowhere, players that exceed expectations and players that fall short. This season will be no different. Without further ado using Fantasy Pros current ADP here is an early look at the 2020 Sleepers Breakouts & Busts.

GREEN BAY, WISCONSIN – SEPTEMBER 26: Jordan Howard #24 of the Philadelphia Eagles runs for a touchdown during the third quarter against the Green Bay Packers at Lambeau Field on September 26, 2019 in Green Bay, Wisconsin. (Photo by Stacy Revere/Getty Images) Redraft Sleepers Breakouts and Busts

I honestly think people forget how talented a RB Jordan Howard really is. I get he doesn’t catch passes but he deserves more respect. Howard has gone over 1100 yards rushing in two of his 4 seasons, 900 in another and in an injury shortened 2019 season had 525 yards rushing on only 119 carries. He’s a welcome addition to a Dolphins team that was led in rushing last season by Ryan Fitzpatrick. Jordan Howard’s ADP is 107. I am drafting him 100 times out of 100 in the back of the 9th round the value is too great to pass up.

There is no questioning Anthony Miller’s talent. The problem Miller has had in his brief career is injury and horrific quarterback play. It’s crazy Miller didn’t get significant run until the end of the season because he is such a talented player. Miller runs against a lot of zone coverage as a slot option but make no mistake, he’s a special route runner no matter the defensive look. Miller is a great Robin to the Batman that Allen Robinson is in the Bears offense. Nick Foles is an upgrade on Mitch Trubisky, and at ADP 147 Miller is an absolute steal in the 13th round.

I admittedly have a soft spot for the 38 year old Philip Rivers. Rivers will have something to look forward to in 2020 that he hasn’t experienced in years, protection and time to throw the football playing behind the league’s best offensive line. Reuniting with Head Coach Frank Reich and Offensive Coordinator Nick Sirianni is a dream come true for Rivers and Colts fans. Rivers will be able to provide streaming value from week-to-week as he guides this offense. His current ADP is a laughable 154 and he is the QB21. Grab Rivers late as your QB2 and reap the benefits. Just don’t be surprised how often you start him this season.

GLENDALE, ARIZONA – DECEMBER 15: Running back Kenyan Drake #41 of the Arizona Cardinals jumps into the endzone to score on a five yard rushing touchdown against the Cleveland Browns during the first half of the NFL game at State Farm Stadium on December 15, 2019 in Glendale, Arizona. The Cardinals defeated the Browns 38-24. (Photo by Christian Petersen/Getty Images) Redraft Sleepers Breakouts and Busts

In his 4 years in Miami, Kenyan Drake never managed to grab hold of the starting running back role regardless of his coaching staff. We saw glimpses of what he could become if given the rock on a consistent basis, but whatever the reason consistent touches never came to fruition. His largest number of touches in a season was 173 in 2018.

In October of 2019, Drake was traded to the Arizona Cardinals. In 8 games with the Cards, Drake rushed for 643 yards on 123 carries, added 28 receptions for 171 yards and scored a total of 8 touchdowns. In those 8 games, Drake averaged 18.8 touches a game, recorded 159.4 PPR points and was RB4. With a full season ahead of him in the Cards offense with a coach that will keep him involved Drake is finally going the workload he needs to breakout. Coming off the board 14th overall and at RB9 the price is steep, but also worth it.

The Falcons allowed Austin Hooper to walk via free agency and traded for Hayden Hurst. Hurst enters an offense with targets a plenty. Hooper was targeted 97 times in 2019, (in 13 games) and 88 times in 2018. Combined in those two seasons Hooper totaled 146 catches, 1447 yards and 10 touchdowns. The Falcons did nothing in the draft to address tight end, so you expect Hurst to be first in line to get most of the targets thrown to the tight ends in that offense.

I do not expect Hurst to be as productive as Hooper but is 60% as good really too much to ask? I think not. If Hooper can stay healthy he should flirt with top 12-15 TE status. Not too shabby for a TE with an ADP of 163 and TE 20. Considering his best season to date is a TE36 finish, I’d call Hurst both a bargain and a breakout.

In 2019, Daniel Jones took a hold of the Giants starting QB role and finished the season at QB23 in 13 games played. His 17.46 points per game were 14th best among quarterbacks with 13 or more games played. Jones showed good and bad qualities in his rookie season. He threw for 336 yards and two touchdowns in the Giants come from behind victory over Tampa Bay in Week 3, and he also had a pair of 3 interception games versus New England and Green Bay.

With the weapons Jones has in his offense, if he can improve his ball security from a year ago, (11 lost fumbles), and those weapons remain healthy, Jones will have a ceiling that will exceed this ADP of QB15, while breaking out in his sophomore season.

ARLINGTON, TEXAS – OCTOBER 06: Aaron Jones #33 of the Green Bay Packers splits the defense of Jaylon Smith #54 and Sean Lee #50 of the Dallas Cowboys in the first quarter at AT&T Stadium on October 06, 2019 in Arlington, Texas. (Photo by Richard Rodriguez/Getty Images) Redraft Sleepers Breakouts and Busts

Aaron Jones finished as the second highest scoring running back to only Christian McCaffrey in 2109 so listing him as a bust may seem odd. First off Jones scored 19 times last season, that will certainly not happen again. Secondly the Packers selected A.J. Dillon in the second round of the NFL draft. You don’t spend that type of draft capital on back and not plan on using him, and thirdly the Devante Adams factor.

We haven’t even touched on the impact that Dillon will have on Jones. Jamaal Williams missed 2 games last season, Jones in those two games totaled 5 touchdowns and 67 fantasy points. Williams isn’t going anywhere and Dillon projects to be a bruising between the tackles running back perfect for the goal line carries. Matt LaFleur desperately wants a run heavy approach similar to the Niners, and his mentor Kyle Shanahan. Drafting Jones at his current ADP of 15 and as the RB10 is a mistake in 2020.

Zach Ertz had himself a record breaking 2018 season, as a result I was all about regression for him in 2019. When you break the NFL record for receptions at 116 and targets at 156 for the tight end position, there is nowhere else to go but down. He did regress, but not nearly as much as I had anticipated. 280 points and TE2 finish in 2018 turned in to a 216 points and a TE4 finish in 2019.

What I find interesting is Ertz’s splits last season. From weeks 1-8 last season he was TE7 averaging 10.7 points per game. Other than Desean Jackson the Eagles were for the most part healthy. The back half of the season when the Eagles were ravished by injury at WR, Ertz was TE3 averaging 16.8 points per game. In addition Dallas Goedert is becoming more and more involved in the Eagles offense especially in the red zone. I believe that these two TE’s cannibalize each other and the additions of Jalen Reagor and to a lesser extent John Hightower balance out the distribution in this offense. Ertz remains a top 12 TE but let someone else take him at pick 36, find your value later in the draft.

So entering 2020, Kittle remains the primary target in San Francisco, they added Brandon Aiyuk in the first round, and Jalen Hurd will aim for a spot in the offense as well. The Niners were the only team in football that ran more than they passed in 2019, that is a trend they would like to continue in 2020. In dynasty formats I want as much Deebo Samuel as I can get, in redraft at this ADP I am letting him go to someone else.

Thank you for reading Redraft Sleepers Breakouts and Busts.