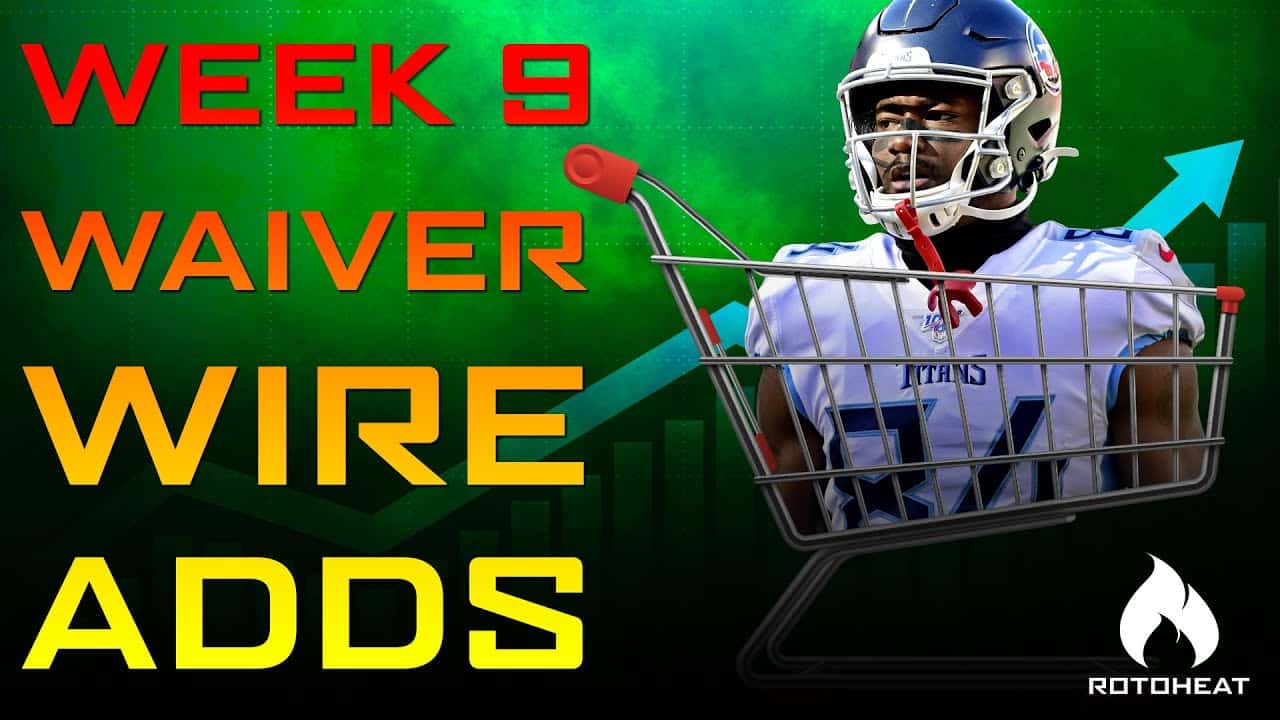 In Week 9 Cincinnati, Cleveland, Los Angeles Rams, and Philadelphia are on bye. This week Brad Menendez and Rob Sullivan discuss the upcoming week and which players we like for your NFL Week 9 Waiver Wire Pickups.

DETROIT, MICHIGAN – NOVEMBER 01: Philip Rivers #17 of the Indianapolis Colts waits for the snap against the Detroit Lions during the second quarter at Ford Field on November 01, 2020 in Detroit, Michigan. (Photo by Nic Antaya/Getty Images) NFL Week 9 Waiver Wire Pickups

Philip Rivers completed 23-of-33 passes for 262 yards and three touchdowns in the Colts’ Week 8 win over the Lions.
Rivers had his way with the Lions secondary, averaging 7.9 YPA in a turnover-free game. It’s his second straight three touchdown performance. Rivers has been trending up after an ugly start to the season. He gets a matchup with Ravens in Week 9, which isn’t great but after week 9, it’s Titans, Packers, Titans again and the Houston Texans

Kirk Cousins completed 11-of-14 passes for 160 yards and a touchdown in the Vikings surprising 28-22 win over division rival Green Bay Packers. Cousins didn’t have to do much in this one, but when he needed to make a throw he did. Next up for Cousins is the Detroit Lions. Entering Week 8 the Lions were giving up 20.9 points per game to the opposing QB, and just got lit up by Philp Rivers to the tune of 22.28 fantasy points.

Nick Foles has been bad since taking over as starting quarterback for the Chicago Bears. That would explain his current ownership percentages. Foles in the overtime loss to New Orleans, if nothing else solidified his hold on the starting job for the Bears. Foles finished 28 of 41 for 272 yards, 2 TDs and a pick. Foles is a streaming option in Week 9 against Tennessee .

SEATTLE, WASHINGTON – NOVEMBER 01: JaMycal Hasty #38 of the San Francisco 49ers scores a touchdown against Bryan Mone #92 of the Seattle Seahawks in the second quarter of the game at CenturyLink Field on November 01, 2020 in Seattle, Washington. (Photo by Abbie Parr/Getty Images) NFL Week 9 Waiver Wire Pickups

JaMycal Hasty didn’t have an overly productive game (12/29/1), this week against the Seattle Seahawks. He is however likely the Niners primary back for the foreseeable future. Raheem Mostert and Jeff Wilson are on IR, and Tevin Coleman left this week with a knee injury. Hasty and Jerick McKinnon will carry the load going forward. The wire is thin at RB and you could do a lot worse than JaMycal Hasty.

Nyheim Hines rushed five times for eight yards and caught 3-of-5 targets for 54 yards and two touchdowns in the Colts’ Week 8 win over the Lions. Hines led the Colts in receiving and his eight touches were just five behind Jonathan Taylor (13). With T.Y. Hilton leaving with a groin injury, Philip Rivers was forced to check down to Hines and slot WR Zach Pascal (3/44). Hines will be on the Week 9 flex radar if Hilton misses time.

Damien Harris rushed 16 times for 102 yards and a touchdown in the Patriots’ Week 8 loss to the Bills. Harris continued to separate himself from Rex Burkhead in another game filled with chunk plays. He scored on an impressive, 22-yard run and out-carried Burkhead 16-6. Harris did not see a target. He will need New England to be competitive in order to not get game-scripted out but Harris is shaping up to be a weekly RB3. His ceiling is capped by not catching passes but he’ll be a threat to hit the century mark in most games.

Marvin Jones caught 3-of-7 targets for 39 yards and two touchdowns in Week 8 against the Colts. Jones caught a pair of red-zone touchdowns, including a 25-yarder that gave Detroit an early lead. His seven targets tied Marvin Hall and were behind only T.J. Hockenson (10). Jones is starting to heat up after catching five passes for 80 yards last week. Jones will be a Week 9 flex play if Kenny Golladay (hip) misses time.

Jalen Reagor came off injured reserve this week, a surprise considering he was given a 6-8 week timetable to recover from thumb surgery. Reagor will join the Eagles on the outside opposite of Travis Fulgham. The duo gives Carson Wentz his most talented pass catchers in a very long time. Reagor the Eagles first round selection has WR3 upside the remainder of the season.

Corey Davis caught 8-of-10 targets for 128 yards and a touchdown in the Titans’ Week 8 loss to the Bengals.
Both the catches and yards were the second most of Davis’ four-year career. Davis’ touchdown was a 12-yarder where he made an excellent grab and displayed some fancy footwork in the front right corner of the end zone. Davis has rebounded from his 2019 season, clearing 69 yards in 3-of-5 appearances and five catches in 4-of-5.

BALTIMORE, MARYLAND – NOVEMBER 01: Tight end Eric Ebron #85 of the Pittsburgh Steelers rushes for a touchdown after catching a pass against the Baltimore Ravens in the third quarter at M&T Bank Stadium on November 01, 2020 in Baltimore, Maryland. (Photo by Todd Olszewski/Getty Images) NFL Week 9 Waiver Wire Pickups

Eric Ebron is back. Last week we told you to pick him up. Ebron caught 4-of-5 targets for 48 yards and a Touchdown in the Steelers’ Week 8 win over the Ravens. Ebron finished third in targets on a day that QB Ben Roethlisberger attempted 32 pass attempts. Ebron has weekly touchdown potential as a plus red zone option. TE is a wasteland and Ebron should be more owned than he is.

For weeks we have been talking to you about picking up Dallas Goedert. Hopefully you listened. This week Goedert is back in the Eagles lineup against the Dallas Cowboys. Goedert opened the week on the wrong side of questionable but showed enough in practice to get cleared. It’s an upgrade for Carson Wentz, and you fantasy roster.

Logan Thomas was on bye in Week 8, and enters Week 9 in a matchup versus the New York Giants. The Giants on average are yielding 10.8 points to the TE position. Thomas has meshed well with replacement QB Kyle Allen and is the #2 pass catching option in the Football Team’s offense behind Terry McLaurin.

ABOUT US
Whether you like to play NFL redraft, dynasty or DFS RotoHeat is your site for fantasy info!
Contact us: [email protected]
FOLLOW US
© ROTOHEAT LLC © 2019-2020 | Powered by: BRANDERMIND
Email: [email protected]m