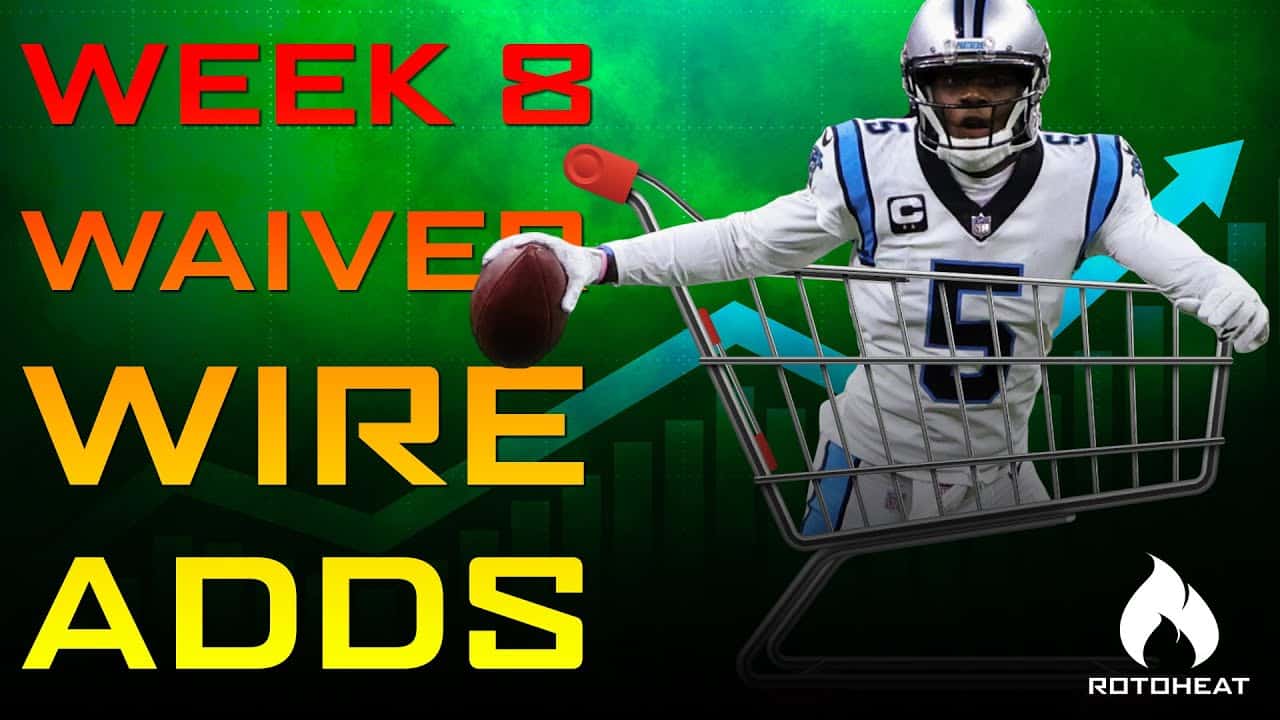 In Week 8 Arizona, Houston, Jacksonville, and Washington are off. This week Brad Menendez and Rob Sullivan discuss the upcoming week and which players we like for your NFL Week 8 Waiver Wire Pickups.

NEW ORLEANS, LOUISIANA – OCTOBER 25: Teddy Bridgewater #5 of the Carolina Panthers warms up before the game against the New Orleans Saints at the Mercedes-Benz Superdome on October 25, 2020 in New Orleans, Louisiana. (Photo by Jonathan Bachman/Getty Images) NFL Week 8 Waiver Wire Pickups

Teddy Bridgewater finished 23/28 for 254 yards with 2 touchdowns in the Panthers 27-24 lose to New Orleans. Bridgewater is proving to be much more than the game manager he was expected to be. Bridgewater entered the week as QB16 in 4 point per passing league scoring. With a weak defense Bridgewater has been forced to throw. A great matchup awaits in Week 8, the Atlanta Falcons.

The Dolphins were on bye in Week 7, but that didn’t stop the team from being in the news. The Dolphins announced that coming out of the bye they will start rookie QB Tua Tagovailoa for the remainder of the season. Moving to Tua is not a surprise but the timing is. Ryan Fitzpatrick has led this overachieving club to a 3-3 record and was Fantasy Football’s QB9 after 6 weeks of action. Tua should be added in all leagues after seeing what fellow rookies Joe Burrow and Justin Herbert have done.

Baker is battling thru injury and is playing as well as he has since his rookie season. Mayfield finished the come from win over Cincinnati 22/28 for 297 yards and a whopping 5 touchdown passes. Baker had to get it done without Odell Beckham Jr, who left early with a knee injury. Mayfield threw 3 touchdown passes to the TE in this one, as well as RB Kareem Hunt and rookie WR Donovan Peoples-Jones. Next up for Baker and the Browns is a Week 8 trip to Las Vegas.

Boston Scott rushed 12 times for 46 yards in the Eagles’ Week 7 win over the Giants, adding three receptions for 46 additional yards and a touchdown. 34 of Scott’s 92 total yards came on the final drive, including a game-winning touchdown. Miles Sanders’ (knee) Week 8 status is unclear. If he can’t get cleared to face the Cowboys, Scott will have some RB2 appeal vs. a truly terrible defense.

Getting the call for the injured Joe Mixon, Gio Bernard filled in admirably. He didn’t do a ton on the ground (13 carries 37 yards), but he delivered in the passing game with 5 catches for 59 yards and a touchdown. Bengals starting RB Joe Mixon is week to week with a foot injury. As long as Mixon is out, Giovani Bernard is a RB2.

The Ravens didn’t play in Week 7, as they were on bye. Next up is a tough match-up with the Pittsburgh Steelers in Week 8. Ravens starting RB Mark Igrnam was injured in Week 6. Should Ingram miss time Dobbins will have more relevance in the Ravens offense.

Marquez Callaway caught 8-of-10 targets for 75 yards in the Saints’ Week 7 win over the Panthers before departing with an ankle injury. With Michael Thomas (hamstring) and Emmanuel Sanders (COVID-19) sidelined, the UDFA out of Tennessee led the Saints in catches, yards and targets before getting left ankle rolled up late. He was having trouble putting weight on it before being helped to the locker room. With neither Thomas nor Sanders a guarantee to return for Week 8 against the Bears, Callaway would be a sensible waiver wire addition if his ankle checks out alright.

DPJ finished this one with 3 catches on 3 targets for 56 yards and the game winning touchdown catch. He was thrust into playing time after WR Odell Beckham Jr. was lost due to a knee injury. The Browns fear that the injury to OBJ is serious, and if he misses significant time, Peoples-Jones and fellow WR Rashard Higgins have value.

The Raiders were on bye last week. Entering Week 7, Nelson Agholor was looking to build off of back to back 14+ PPR point performances. Agholor finished with 6 catches on 9 targets for 107 yards and 1 touchdown. Agholor appears to have found a home in this Vegas offense and with the way Derek Carr is playing he should be added in all leagues.

CINCINNATI, OHIO – OCTOBER 25: Harrison Bryant #88 of the Cleveland Browns is tackled by Jessie Bates III #30 of the Cincinnati Bengals during the second half at Paul Brown Stadium on October 25, 2020 in Cincinnati, Ohio. (Photo by Andy Lyons/Getty Images) NFL Week 8 Waiver Wire Pickups

Austin Hooper was been declared out for this week after undergoing surgery for appendicitis, and rookie Harrison Bryant got the start for the Cleveland Browns. Bryant made the most of his opportunity. Bryant turned his 5 targets into 4 catches for 56 yards with a pair of touchdowns. Hooper likely misses next week in Vegas making Bryant worth an add and possibly a start.

Eric Ebron caught 6-of-8 targets for 50 yards in the Steelers’ Week 7 win over the Titans. Ebron finished third in targets on a day that QB Ben Roethlisberger attempted a season-high 49 pass attempts. As a result, Ebron’s enjoyed a larger than normal reception total this week. Ebron has weekly touchdown potential as a plus red zone option. TE is a wasteland and Ebron should be more owned than he is.

Logan Thomas caught 4-of-4 targets for 60 yards and a touchdown in Washington’s Week 7 win against the Cowboys. Thomas found himself open throughout the first half and Kyle Allen delivered. He took a short pass and ran 26 yards for his touchdown against Dallas. Thomas will continue as Washington’s No. 2 pass catcher next week against the Giants. He’ll be a low-end TE1.