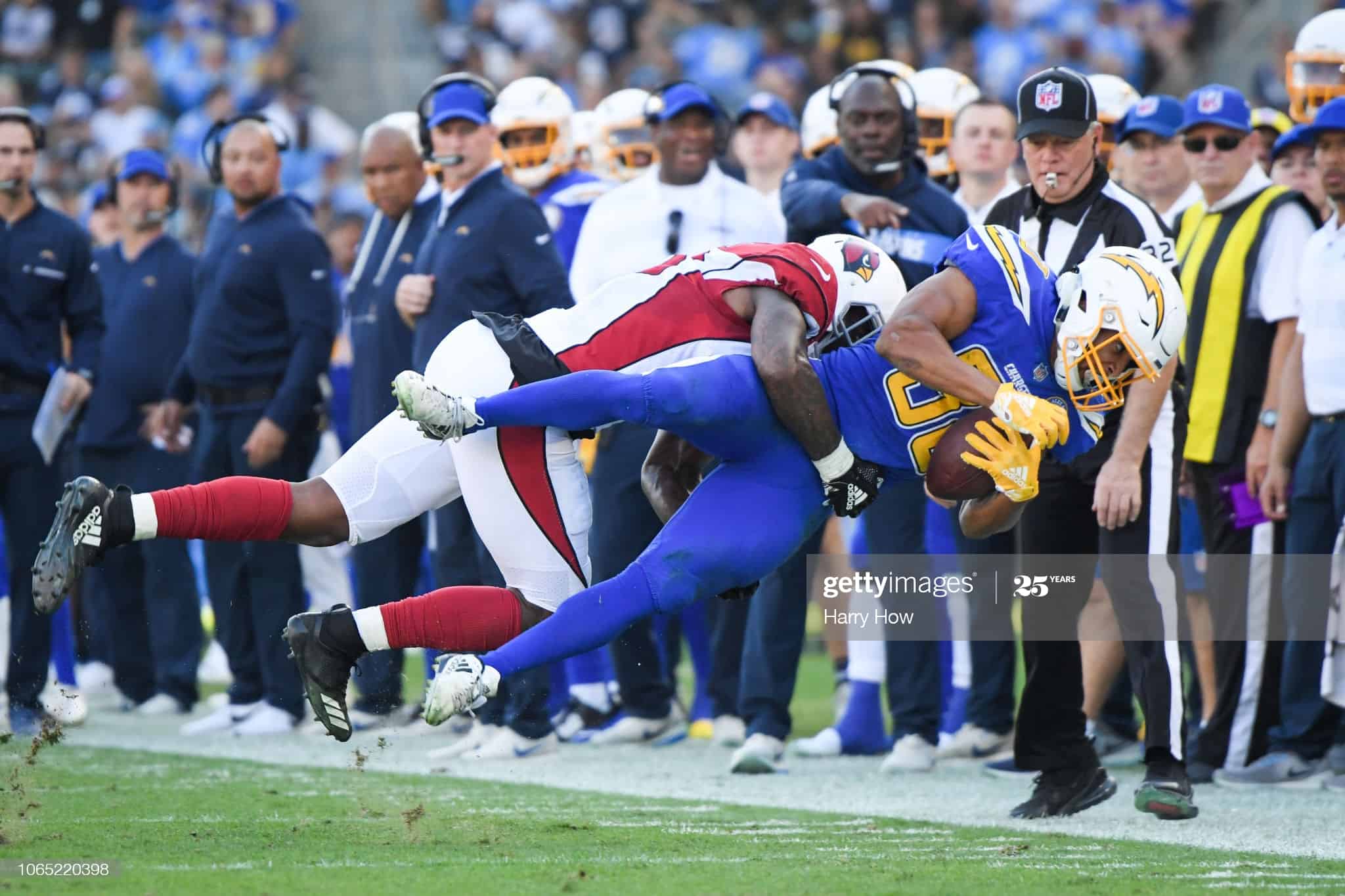 Well, we had a week without any more games moved, so that’s a positive. The bad news is that the injuries continue to pile up, and the byes are just getting going. Below are my NFL Week 8 IDP Waiver Wire Adds.

Reed had his second big week in a row, with 16.50 in Week 7 (84% snaps) after 16.00 in Week 6 (86% snaps). Prior to the Broncos bye he had 7.00 in Week 4 (74% snaps). We have enough evidence now to show that Reed looks like a big part of the Broncos defense going forward, and his production is enough to warrant a pick-up. The icing on the cake is that the Broncos next face the Jaguars, who have given up the 10th most points to fantasy linebackers this year.

Krys Barnes was on this list last week and has 12.00 points on 4 solos, 4 assists, 1 TLF and 1 sack. Christian Kirksey is still currently out, and Kamal returned from injury himself this week and had 6 solo tackles for 6 points. The interesting part is that Kamal out-snapped Krys , 43% to 40% (a two snap difference). This clearly isn’t a huge difference, and when Christian returns I imagine he starts again, but for the time being Kamal looks to be worth an add.

Bentley has been playing the most of any New England linebacker this year; he just isn’t owned much as he has not produced a lot this year. He has one game (Week 6) over 6.00 points, and has an average of 4.7 in those other weeks. I’m not advocating him as a great play this week against Buffalo, but if you are in the need for some guaranteed points, and the potential for a big week if the offensive ineptitude continues for both the Bills and Patriots (to where we have a run heavy game) he is a fine shot in the dark; just don’t expect a ton.

Reddick appears to have taken over for the out-for-the-year Chandler Jones. In Week 6 Reddick had 4 solos, 1 assist, 2 TFL, 2 sacks and 1 PD. He followed that up in Week 7 with 5 solos, 6 assists, 3 TFL and 1 sack. The Cardinals are on bye for Week 8, but he’s doing well enough to grab and sit for a week, if you have the room.

CLEVELAND, OHIO – OCTOBER 11: Ronnie Harrison Jr. #33 of the Cleveland Browns celebrates after scoring a touchdown from an interception in the third quarter against the Indianapolis Colts at FirstEnergy Stadium on October 11, 2020 in Cleveland, Ohio. (Photo by Jason Miller/Getty Images)

Harrison started over Karl Joseph (who was coming back from injury this week) and played well. Harrison was traded for right before this season and needed time to learn the playbook. They had a chance to see what they have in Joseph (who is a free agent after this year)and it has been underwhelming thus far. Given how he played this past week, and the week prior that he played (Week 5) I think they are going to stick and see what they have with Harrison.

It was reported that Harrison was injured in the game, but he was seen in the locker room celebrating, and dancing after, the win. I’ve seen nothing to indicate he will be out, but pay attention to this, and news of who is starting between and Joseph, as the week goes on.

Jenkins has played 100% of the snaps most weeks, and since Week 2 was done he has been averaging 8.88 points a game. Week 8 brings the Broncos, who give up the third most points a game to opposing safeties. He’s a great spot start this week, and potentially holds end-of-season value if you have a need at the position.

Sorensen only averages 5.5 a game for the season, but from Week 4 on the lowest he has scored in a game is 7. The Chiefs face the Jets in Week 8, and while the Jets do not give up a lot to opposing secondaries this year, they will have to throw to try and keep up with the Chiefs.

In weeks 3 through 6, the lowest percentage of defensive snaps that Gladney played was 97%. During that time he averaged 4.75 solo tackles, with a few assists, TFLs, PD and a forced fumble thrown in for a 7.75 points per game average.

The Vikings were on a bye in Week 7, and face the red hot Green Bay Packers offense in Week 8. Gladney did not record a stat on 12% of the defensive snaps in Week 1 against the Packers, but with him now almost an every down player, I expect another nice game against a Packers offense that is throwing a ton.

MIAMI GARDENS, FLORIDA – OCTOBER 18: Emmanuel Ogbah #91 of the Miami Dolphins tackles quarterback Joe Flacco #5 of the New York Jets for a sack in the second half of their game at Hard Rock Stadium on October 18, 2020 in Miami Gardens, Florida. The Dolphins defeated the Jets 24-0. (Photo by Michael Reaves/Getty Images)

After averaging 2.50 points the first three weeks, Ogbah has found his footing and is averaging 13.67 the past three weeks (Miami had a Week 7 bye). The Dolphins face the Rams in Week 8, and the Rams give up the 12th most fantasy points to opposing defensive ends (this is prior to the Rams 10/26/2020 game against the Bears). Ogbah will be fresh off some rest and in a great spot to continue this hot steak in Week 8.

With Ngakoue traded someone will need to step in and start. Holmes has been mentioned by the coaching staff as improving as the year has gone on. This is a shot in the dark, but there is playing time to be had opposite of Ifeadi Odenigbo, and was getting the third most snaps of the Vikings defensive ends before Ngakoue was traded. I’m not promising he’ll be a world beater, but quite frankly the level of defensive line play week-to-week this year in general is all over the place. If you have room to take a shot on a guy, get Holmes and see what he does with more playing time.

Barnett has never fully put it together (25 points this season on 9 solos, 5 assists, 2 TFL and 2.50 sacks), but he has always had the talent. He is playing around 60% of the defensive snaps each week and in Week 8 the Eagles face the Dallas Cowboys mess. Not only is their offensive line in shambles, he may be facing third string QB Ben DiNucci after starting back-up Andy Dalton was concussed in Week 7. I like Barnett as a spot starter this week if you are in need of bye week help.

Strictly a defensive tackle required league play, Jones only has 9 solos, 5 assists, 1 TFL and .50 sacks for the year. That said the Titans play the Bengals this week, and he’s been getting around 70% of the defensive snaps the past few weeks.

I’ve probably said it most weeks, but the Bengals give up a TON of points to opposing defensive lines, and the Bengals had more injuries to their offensive line this past week against the Rams. With the offensive line paying more attention to Harold Landry, Jadeveon Clowney and even Vic Beasley, I like Jones’ chances to get a TFL or a sack this week.

You catch NFL Week 8 IDP Waiver Wire Adds and all our other video content on YouTube. Be sure to subscribe and click the notification bell to ensure that you don’t miss any of our other great content. We have free IDP Rankings over on RotoHeat.com, and you can catch our IDP-Specific podcast on most podcatchers! You can also find me on Twitter.