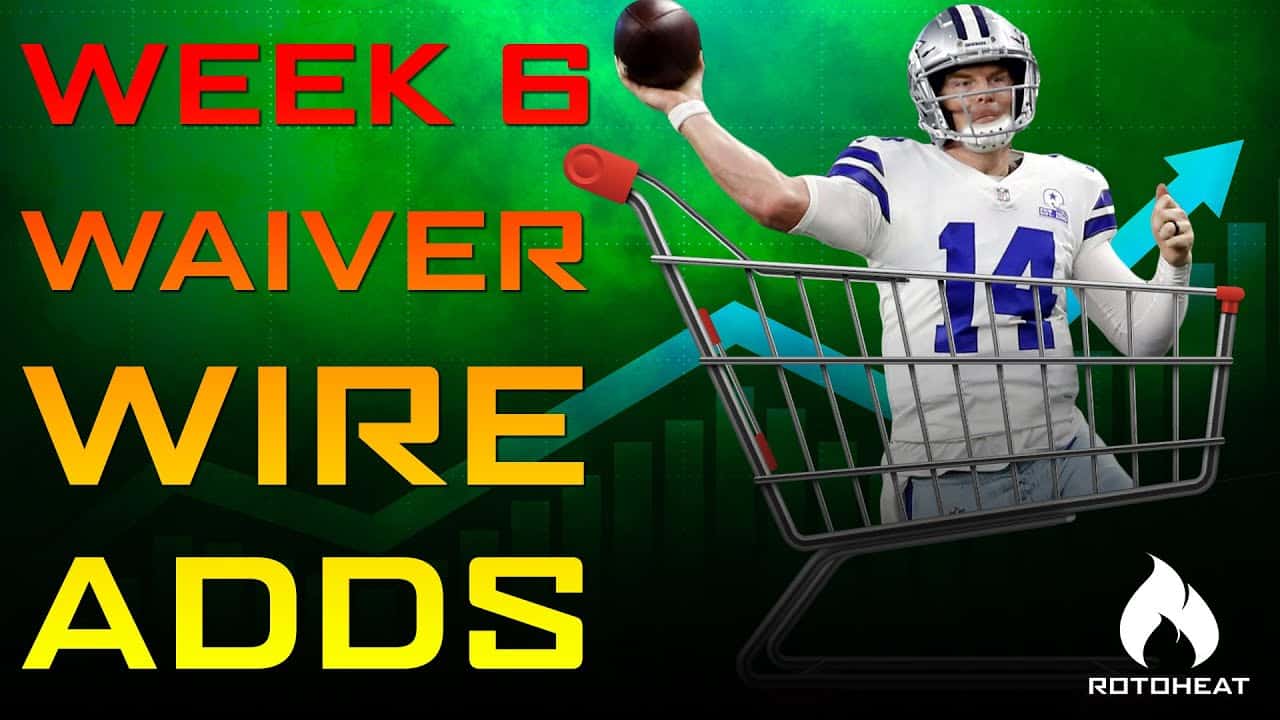 Each and every week in Fantasy Football there are surprise performances and there are injures. Both of these occurrences, tend to lead to opportunity and opportunity leads to touches. Touches lead to fantasy points. Every week there is something to pay attention to in the NFL. At times it is injuries, others it’s bye weeks, and in Week 5 it was all the above including the Covid-19 pandemic.

Week 6 will see schedule fluctuation as well as more bye weeks, the original schedule had Las Vegas, New England, New Orleans, and Seattle on bye. New England will have their Week 5 game become their bye, but for now the other three are off. This week Brad Menendez and RotoHeat founder Rick Butts bring you waiver wire add for NFL Week 6 Waiver Wire Pickups.

Andy Dalton’s ownership entering Week 5, made perfect sense. He was the clear back-up to the highest scoring QB in Fantasy this season and a quarterback who is never injured. Until now. Dak Prescott went down on Sunday with a gruesome ankle injury and is all but certain to miss the reminder of the season. Dalton enters an offense with arguably the top trio of wide receivers in the league, a capable tight end and one of the best running backs in the NFL. The defense in Dallas remains terrible, throwing the ball and scoring points isn’t an option, it is a necessity. In his 10th season, this is the best fantasy scenario Dalton has ever seen.

Derek Carr entered Week 5, as the QB19 averaging 17.78 fantasy points a week, and will be a near top-12 QB if and when Week 5 finally concludes. Carr went into Arrowhead yesterday and put up a line of 22/31 347 yards with 3 touchdown passes and an interception (24.98 fantasy points). The offense in Vegas is rolling and Carr is playing as well as he did in his near MVP season in 2017. Scheduled to be on bye in Week 6, you may be able to wait a week but if you are QB needy and have an open roster spot, Carr is a solid NFL Week 6 Waiver Wire Pickups

Ryan Fitzpatrick has no plans on giving up his starting gig in Miami. Fitzmagic entered the week with 3 top 12 QB fantasy weeks in the first four, and added to it in Week 5. The Dolphins smacked the defending NFC Champions in the mouth on Sunday and Fitz put up 27.60 fantasy points. He has now topped 20 points in 4 of the 5 weeks including 4 straight. The Dolphins at 2-2 are a surprise, as is the play of Ryan Fitzpatrick and he is a quarterback that needs to be owned.

LANDOVER, MARYLAND – OCTOBER 11: Cam Akers #23 of the Los Angeles Rams carries the ball against the Washington Football Team in the second half at FedExField on October 11, 2020 in Landover, Maryland. (Photo by Patrick McDermott/Getty Images) NFL Week 6 Waiver Wire Pickups

Cam Akers returned from injury in Week 5 and eased back into the Rams lineup. He had 9 carries for 61 yards and was easily the most productive back for LA on Sunday. He is owned a little high for this article, but is still available in nearly half of leagues. Akers is the most talented back on the Rams roster and we are betting he shows it going forward. If he is available in your league, go get him.

If you are in a bind entering Week 6, and need a short term replacement, you man could be Alexander Mattison. Vikings lead back Dalvin Cook injured his groin in the 3rd quarter Sunday night and Mattison filled in admirably. Mattison finished with 136 scrimmage yards on 23 touches. If Cook misses Week 6 versus Atlanta, Mattison will be a borderline top-12 RB, as his replacement.

D’Ernest Johnson is back again his week. His ownership shot up to 29% from zero a week ago after his impressive performance in Week 4 combined with the injury to Nick Chubb. Johnson was second in the AAF in rushing with 372 yards at the time of its collapse. He also led the league in yards-per-carry with a 5.8 mark, totaling a 64-372-2 rushing line. Johnson flashed in the passing game as well, compiling a 22-220-1 line there. He is one injury away from being the lead back in an offense that prefers to run the football. He needs to be owned in more than 29% off leagues

Chase Claypool caught 7-of-11 targets for 110 yards and three touchdowns in the Steelers’ Week 5 win over the Eagles, adding a rushing touchdown on three carries. Claypool stepped up with three scores through the air and an extra touchdown on the ground while Diontae Johnson was sidelined with a back injury. His 11 targets led the Steelers and no other WR saw more than 5 on Sunday. Claypool should be rostered in every league and could even be worth starting if Johnson is out for Week 6 when Pittsburgh faces the Browns.

Henry Ruggs caught 2-of-3 targets for 118 yards and one touchdown in the Raiders’ Week 5 win over the Chiefs. His ownership surprised us to be honest. He was likely dropped in a lot of leagues due to his injury. Ruggs missed the previous two weeks with a pulled hamstring. His three targets were tied for third on the team behind Darren Waller and Jalen Richard. Ruggs can run by anyone, but his volume is a question mark. Ruggs gets the bye and will then face the Bucs as an upside WR in Week 7.

Travis Fulgham may not be a long-term solution for your Fantasy roster, but he is worth the add nonetheless. Fulgham caught 10-of-13 targets for 152 yards and a touchdown in the Eagles’ Week 5 loss to the Steelers. Fulgham has bounced around multiple teams during his two years as a pro but appears to have found a home in Philadelphia. Philly has been ravaged by receiver injuries again this year. He led the team in targets and no other Eagles player saw more than six from Carson Wentz. Fulgham is one of the best adds off the waiver at receiver and has some viability at flex if Philly’s receiving room can’t get healthy for Week 6.

When Sammy Watkins left Week 5 with a hamstring injury, it meant increased snaps for Demarcus Robinson. He finished the game without a catch on 4 targets. One of those targets was a near TD reception in the back of the end zone. Robinson needs to be owned. If Watkins misses time which is likely , he is in the flex conversation in deeper leagues.

ARLINGTON, TEXAS – OCTOBER 04: Dalton Schultz #86 of the Dallas Cowboys runs for a touchdown against the Cleveland Browns in the fourth quarter at AT&T Stadium on October 04, 2020 in Arlington, Texas. (Photo by Ronald Martinez/Getty Images) NFL Week 6 Waiver Wire Pickups

Dalton Schultz entered the week as TE6 averaging 12.46 PPR points a week thru four weeks. He caught just 1-of-3 targets for six yards in the Cowboys’ Week 5 win over the Giants. Schultz is likely to take a hit in the wake of Dak Prescott’s season-ending broken ankle, but QB Andy Dalton has shown a connection with his TE during his Cincinnati days. Dallas will be throwing a lot and even as the 4th or 5th passing option for a back-up QB, he needs to be owned. Schultz gets the Cardinals in Week 6.

As mentioned in reference to Travis Fulgham, the Philadelphia Eagles are a mess when it comes to healthy pass catchers. Eagles TE Zach Ertz appears to be a shell of his former self, and it is quite likely that Goedert is the Eagles top TE, and perhaps pass catcher when he returns off IR 9ankle injury). If you have an open roster spot, go beat your leagues waiver wire and grab Dallas Goedert.

Will Dissly has seen his season cut short in two straight seasons by injury. He is easing his way back into the Seattle offense and on the season only has 8 targets. He has turned those 8 targets into 8 catches for 56 yards and a touchdown. With the Seahawks on bye in Week 6 you can leave Dissly on the wire, but he is a TE to keep your eye on. His role will continue to grow in the offense and with the way Russell Wilson is playing having pieces of the Seahawks offense is a good thing.