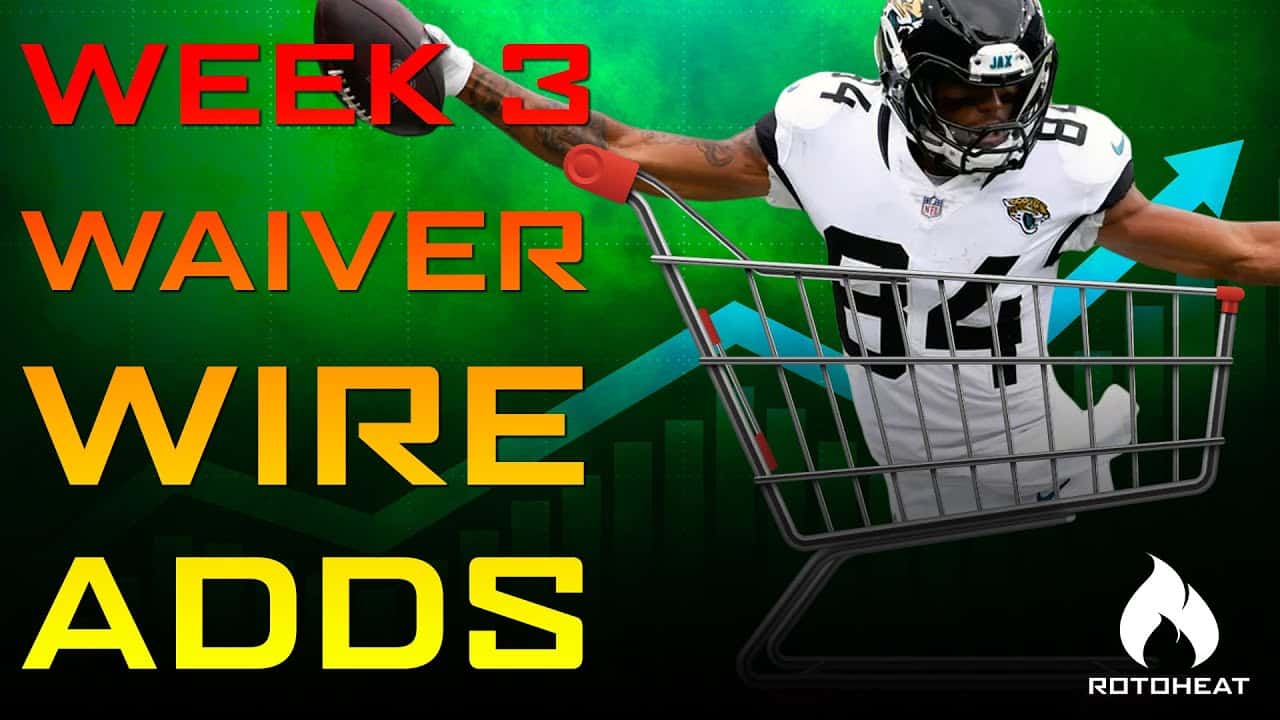 Each and every week in Fantasy Football there are surprise performances and there are injures. Both of these occurrences, tend to lead to opportunity and opportunity leads to touches. Touches lead to fantasy points. Week 2 was unlike anything of recent memory when it comes to injuries, and injuries to big name fantasy assets. How you navigate your waiver wire this week may just save your season. Each and every week Rob Silvers brings you waiver wire adds and today we kick it all off with NFL Week 3 Waiver Wire Pickups.

Jaren Goff struggling a year ago, and his Rams led team struggled along with him. Well in two weeks the Rams look a lot more like the team that went to the Super Bowl than the team that went 9-7 and missed the playoffs a year ago. Through the forst two weeks Goff has 542 passing yards, and 3 touchdowns. Goff has a tough matchup next week vs. Buffalo but in weeks 4 & 5 he gets the Giants and Washington. This is too good of a QB to leave on your league’s waiver wire.

Tyrod Taylor was a late scratch with a chest injury and in stepped Justin Herbert for his NFL debut. Herbert was 22 of 33 for 311 yards with a touchdown and an interception, and added 18 yards and a touchdown on the ground. If you need a QB going forward Herbert looks like the man to target. Still not sold? The Chargers get the Panthers in week 3

Drew Lock was injured mid way through the Broncos match-up with the Pittsburgh Steelers. In came backup Jeff Driskel and he fared well. 18/34 for 256 yards and 2 touchdown passes and an interception. Driskel has shown he can play subbing for the injured Matt Stafford in Detroit a year ago.

Sean McVay wasn’t kidding around when he said he would use all his backs this season. IN Week two, it was Darryl Henderson that stepped up with Cam Akers hurtling and last week’s darling Malcolm Brown struggling. Henderson had 12 carries for 81 yards and a touchdown. He added 4 catches for another 36 yards.

With Saquon Barkley thought to be lost for the season with a knee injury, its now Dion Lewis’ job to at the least split the Giants backfield. Lewis is relief today had 10 unproductive carries for 20 yards and added 4 grabs for 36 yards. I wouldn’t suggest spending a lot of your FABB but hey starting RBs are hard to fond on waivers.

When Raheem Mostert went down with a sprained MCL, he joined a long list of injured 49ers. It also opened the door for two of the Niners other running backs. Coleman struggled with 12 yards on 14 carries and he mixed in 2 catches for 28 more. McKinnon had 3 runs for 77 yards, highlighted by a 55 yard carry and a 16 yard TD run. McKinnon would likely be my target here as Coleman is owned in half of ESPN and YAhoo leagues.

Mecole Hardman wasn’t used often in the Chiefs overtime win over the Los Angeles Chargers, but in the coming weeks that may very well change. WR Sammy Watkins left this onw with what appeared to be a head injury after a nasty helmet to helmet hit. The injury is significant, as it moves Hardman into the #2WR role for Kansas City. There is no better offense to own pieces of.

Keelan Cole appears to be one of QB Gardner Minshew’s favorite targets thru two week. Cole hauled in 6 catches for 58 yards and a touchdown a week after he posted 5 for 47 yards and a touchdown. After two weeks, Cole will be in the top-24 QR conversation. I wouldn’t expect him to stay there but in an offense that will throw as often as Jacksonville does, he’s a nice add off your waiver wire.

Michael Pittman was questionable this week dealing with some aches and pains. His role in the Colts offense elevated when fellow WR Parris Campbell left early with a knee injury. Pittman finished with 4 catches on 6 targets for 37 yards. Those numbers don’t exactly leap off the page, but Pittman’s role will continue to grow in the offense, and if Campbell misses significant time, it will grow at an expeditated rate.

If you picked up Dalton Schultz after the Blake Jarwin torn ACL, good for you. Judging my his ownership percentages very few did. That is going to change this week, after Schultz had 8 catches on 10 targets for 888 yards and a TD

Jordan Reed, remember him? Ironically Reed is one of the healthier 49ers currently. Reed slide into the Niners starting lineup today, replacing the injured George Kittle. Reed didn’t disappoint showing flashes of his glory days in Washington. Reed finished with 7 grabs on 8 targets for 50 yards and a pair of touchdowns.

Being a TE in a Philp Rivers led offense is a good gig. Mo Alie Cox is yet another TE to benefit from the veteran QB. Cox had 6 catches on 6 targets and totaled 111 yards. If Jack Doyle remains out, you could do much worse than Alie-Cox at TE.